Skip to content
More than 2,500 gathered together for this year’s Skaro Pilgrimage, Aug. 14-15, setting aflame thousands of candles around the grotto as prayers and intentions to the Blessed Virgin Mary. The year 2019 marks the 100th Anniversary of the pilgrimage.Lincoln Ho, Grandin Media 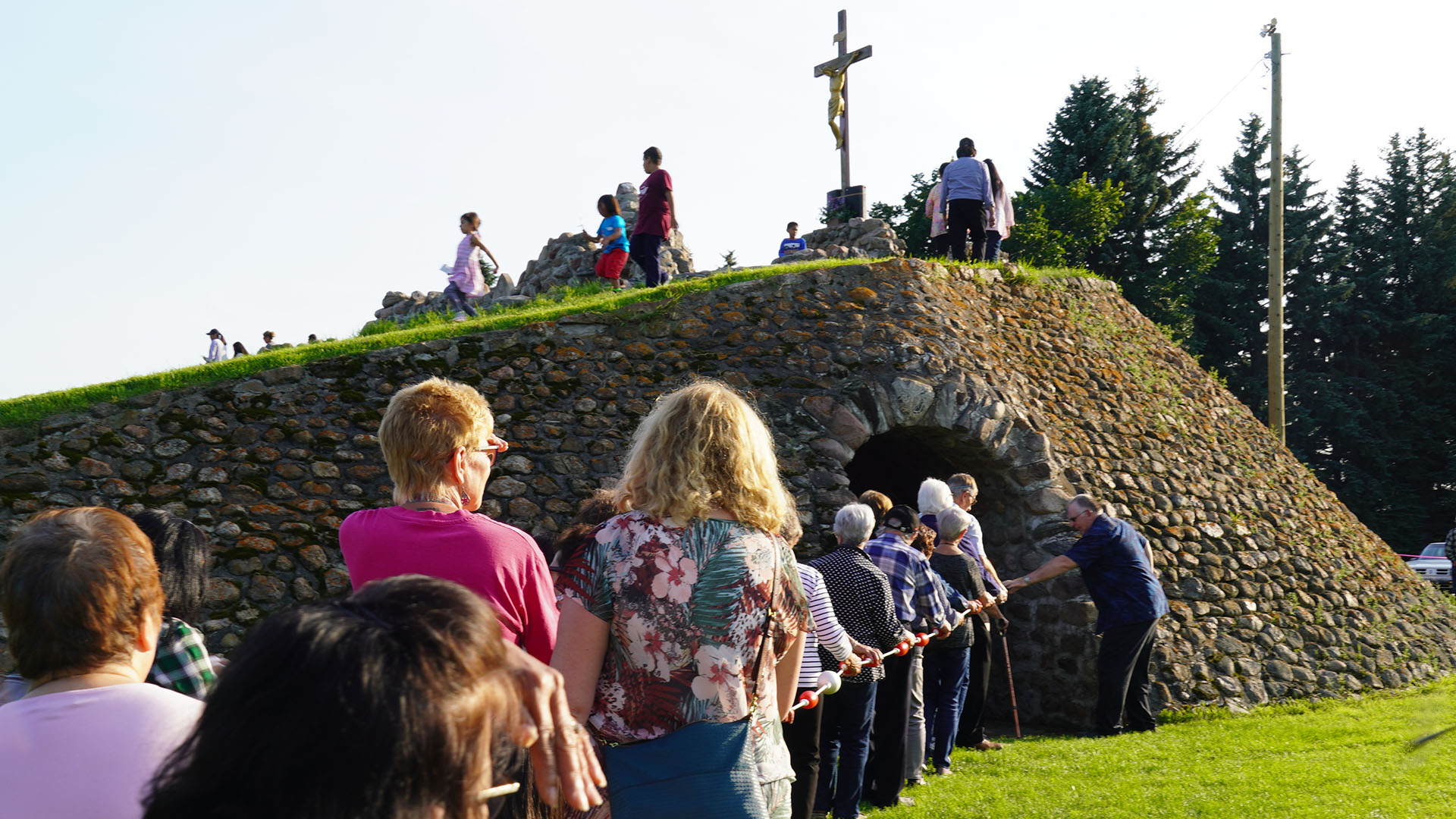 A large Holy Rosary being carried into Skaro Shrine for a corporate prayer before Mass on August 14. 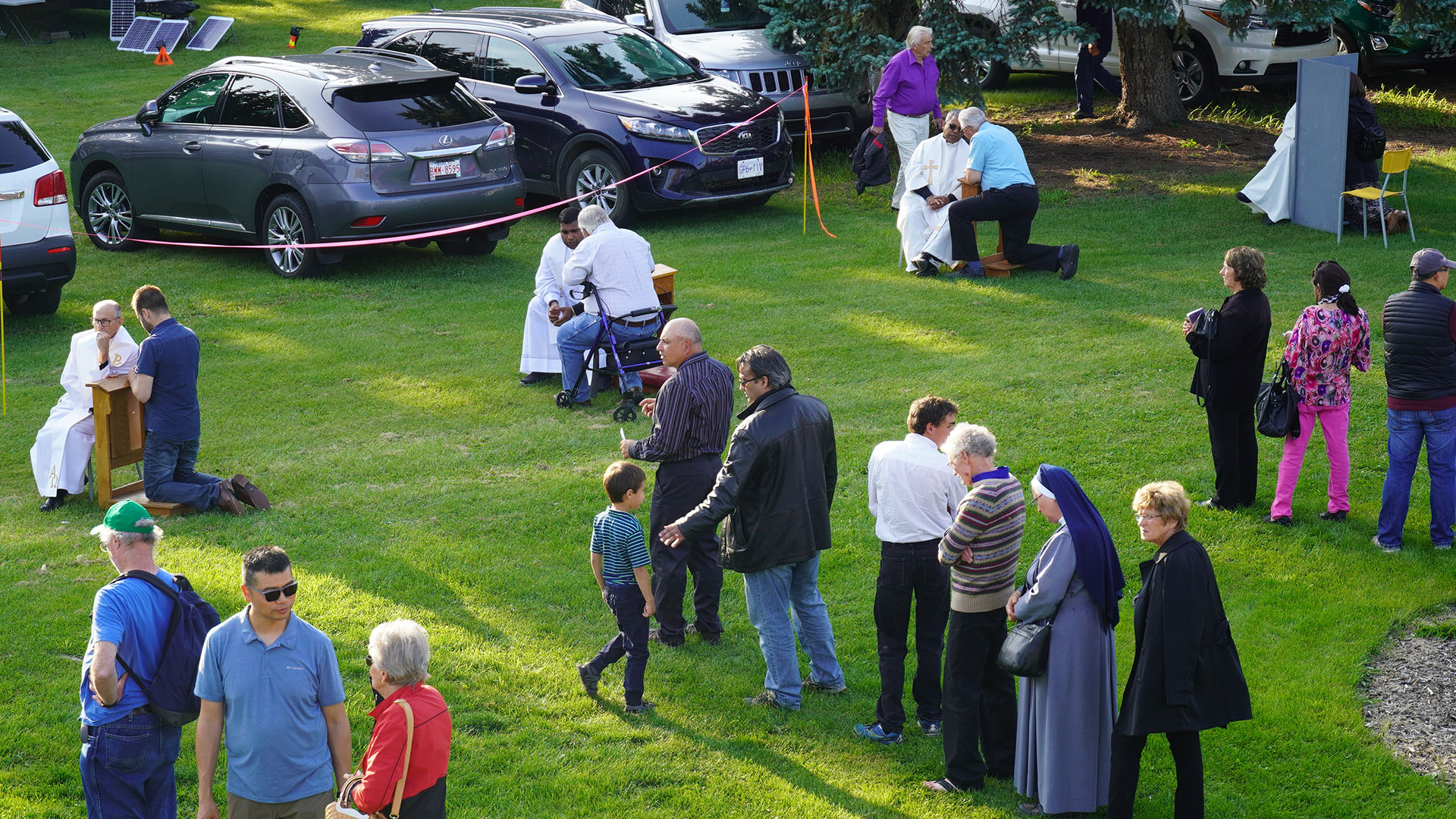 Pilgrims queue for the sacrament of Reconciliation before Mass. 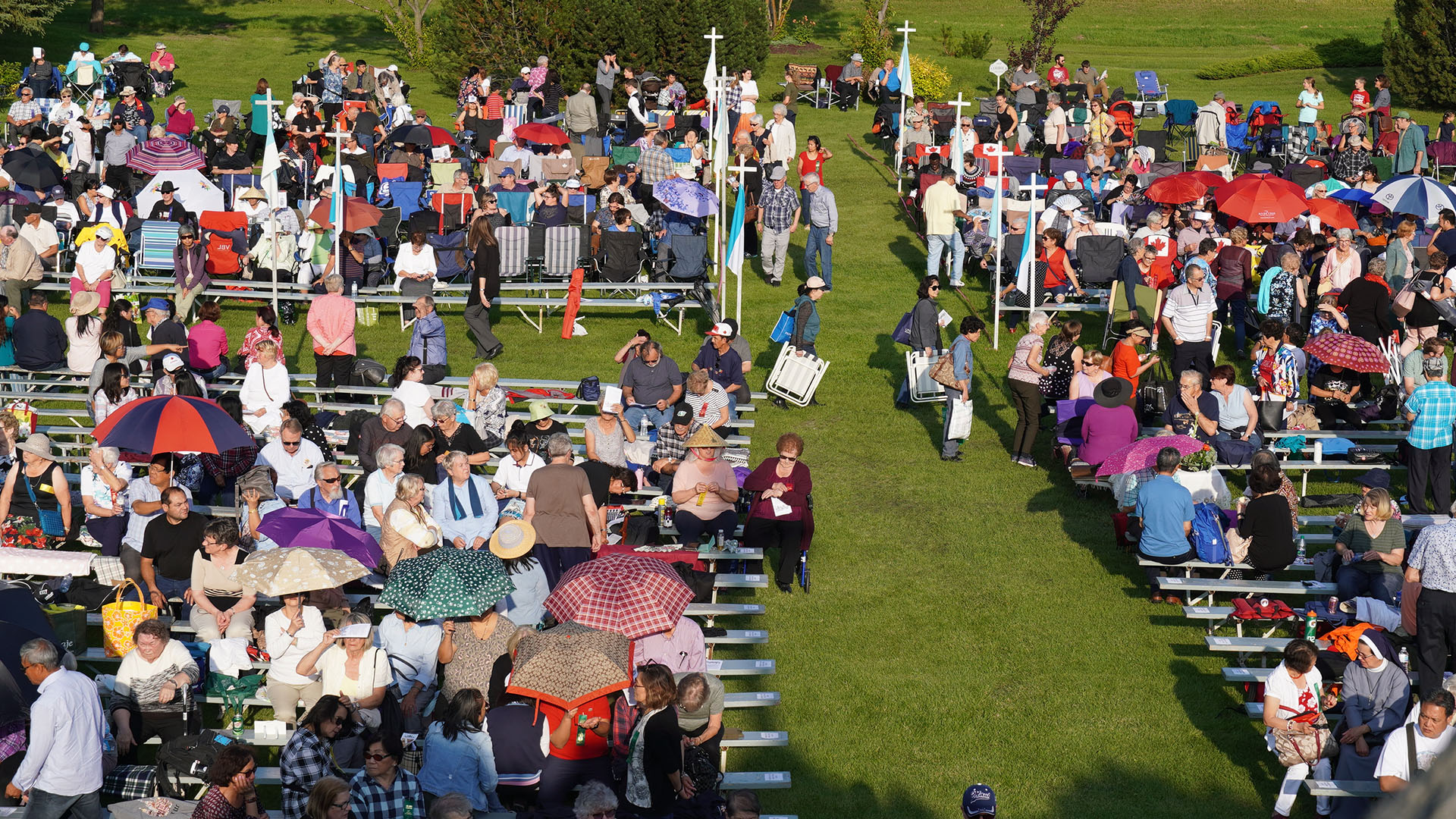 Pilgrims gather at Skaro Shrine as the Holy Rosary begins. 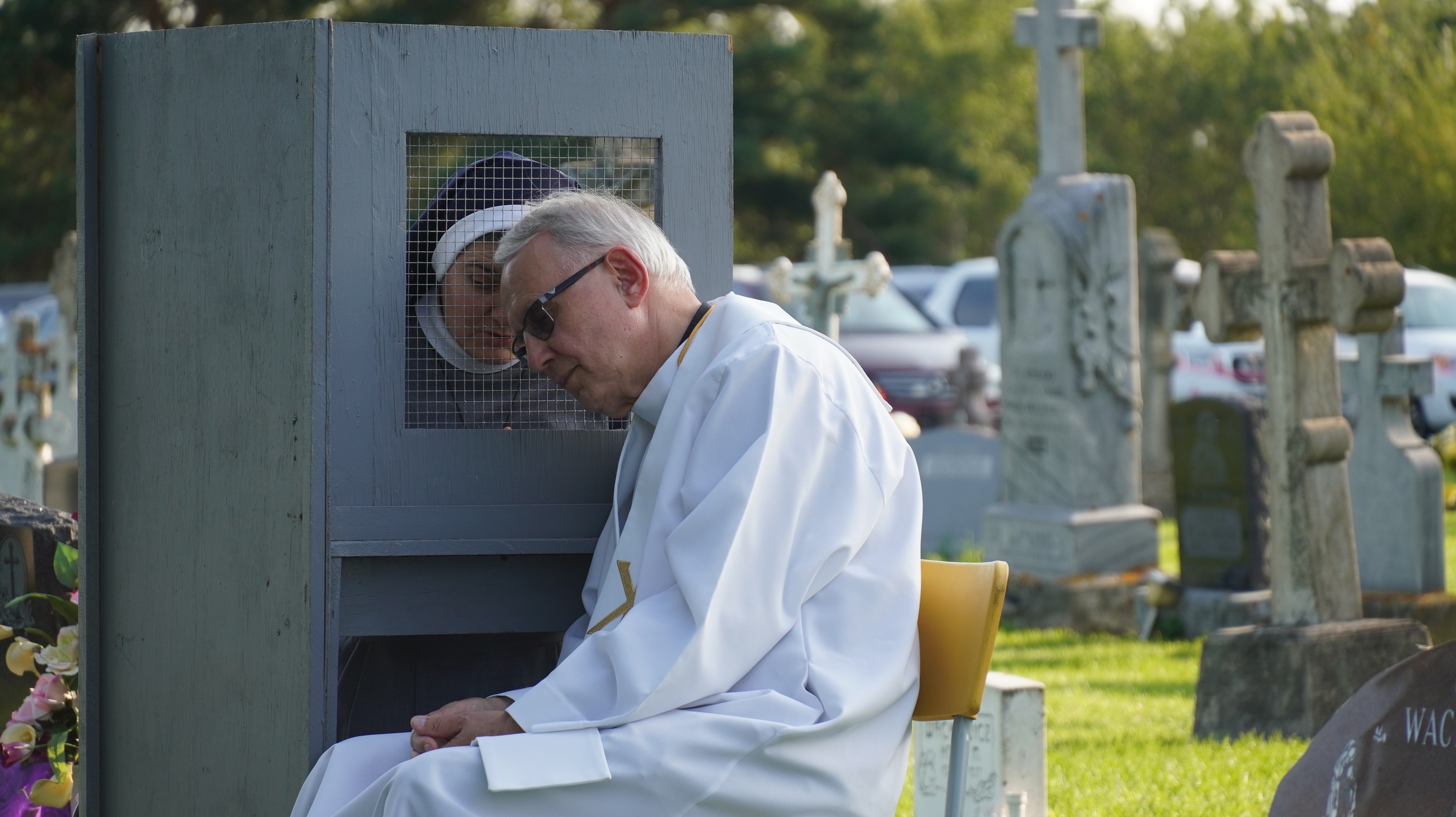 Father Adam Lech hears the confession of a sister from the Servants Sisters of Mary Immaculate. 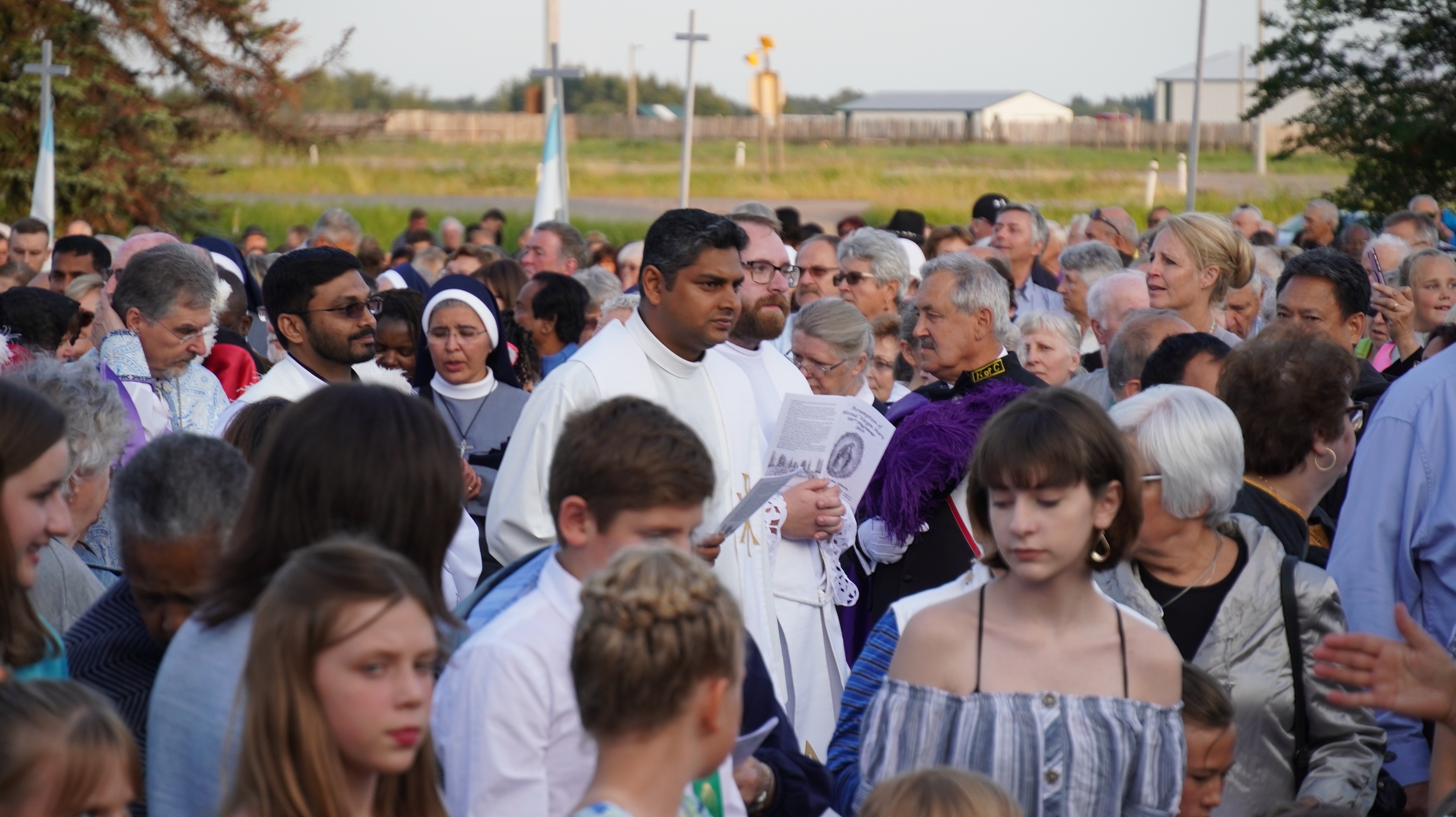 The procession begins the Mass at Skaro Shrine. 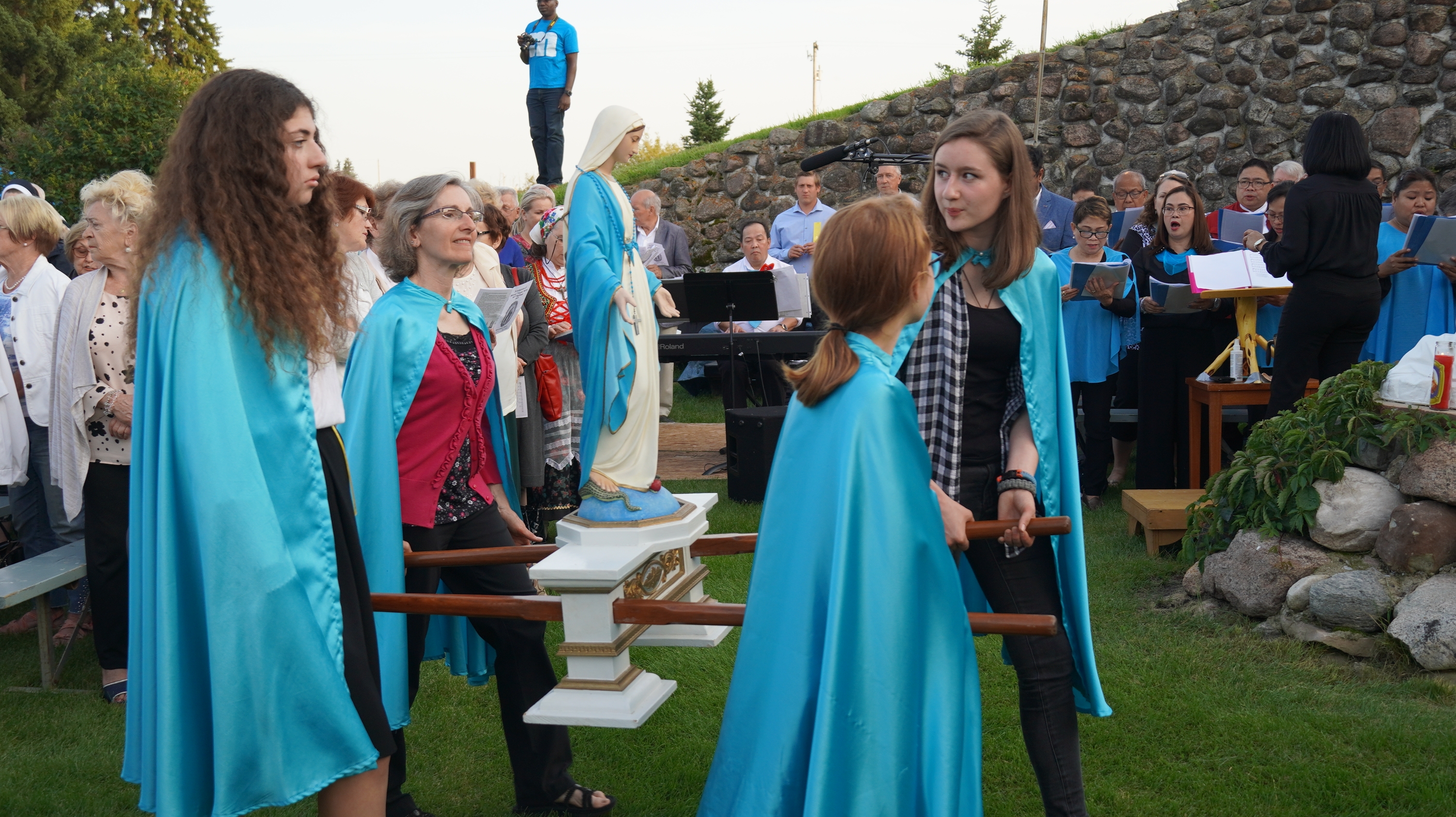 Four women carry a statue of Mary for the vigil celebration of the Assumption of Blessed Virgin Mary.

A Eucharistic Procession circles the grotto after Mass in Skaro.

A man places a candle at Skaro Shrine. 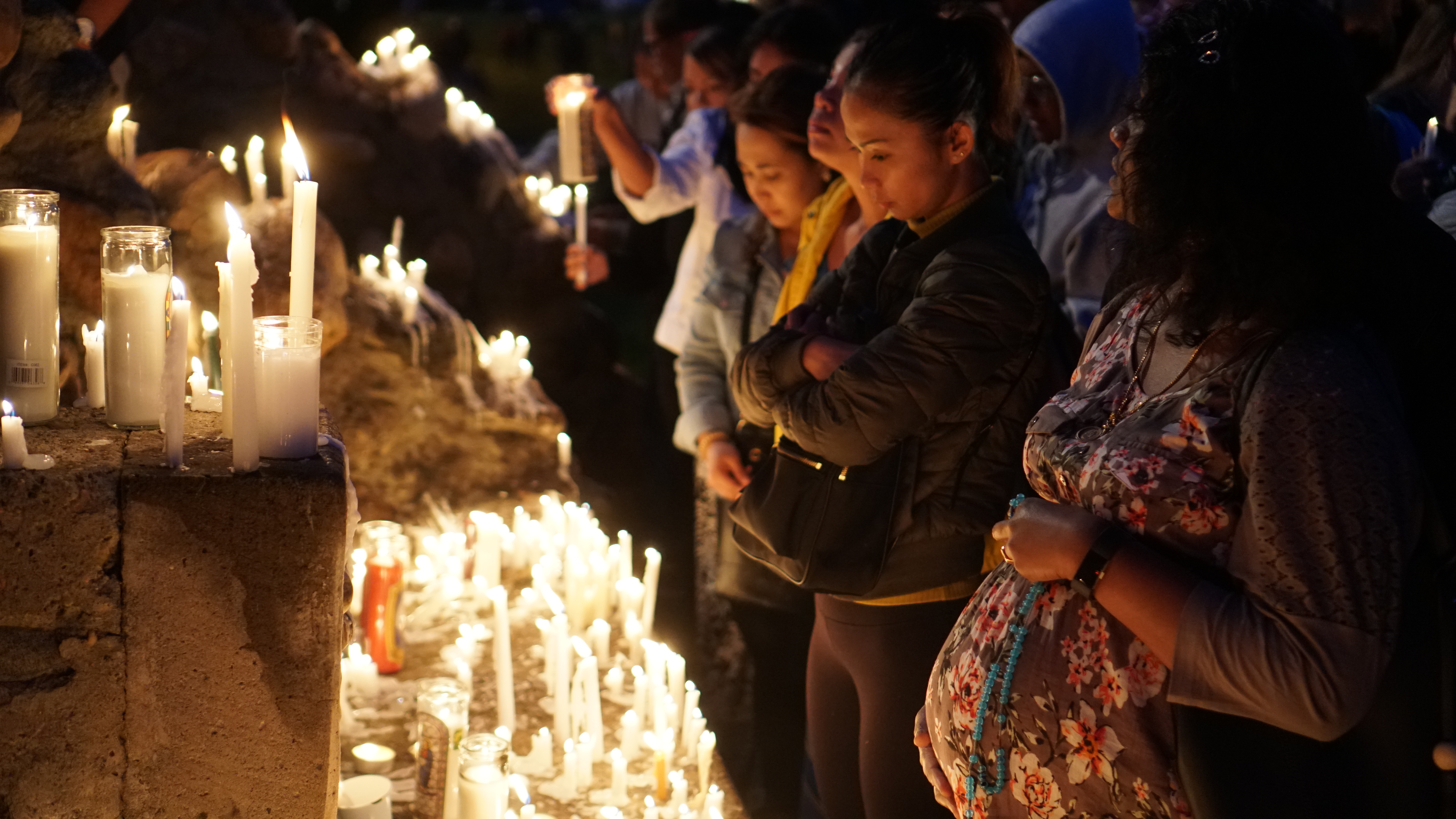 The Rosary Garden was a new addition at Skaro to mark the 100th pilgrimage in 2018. 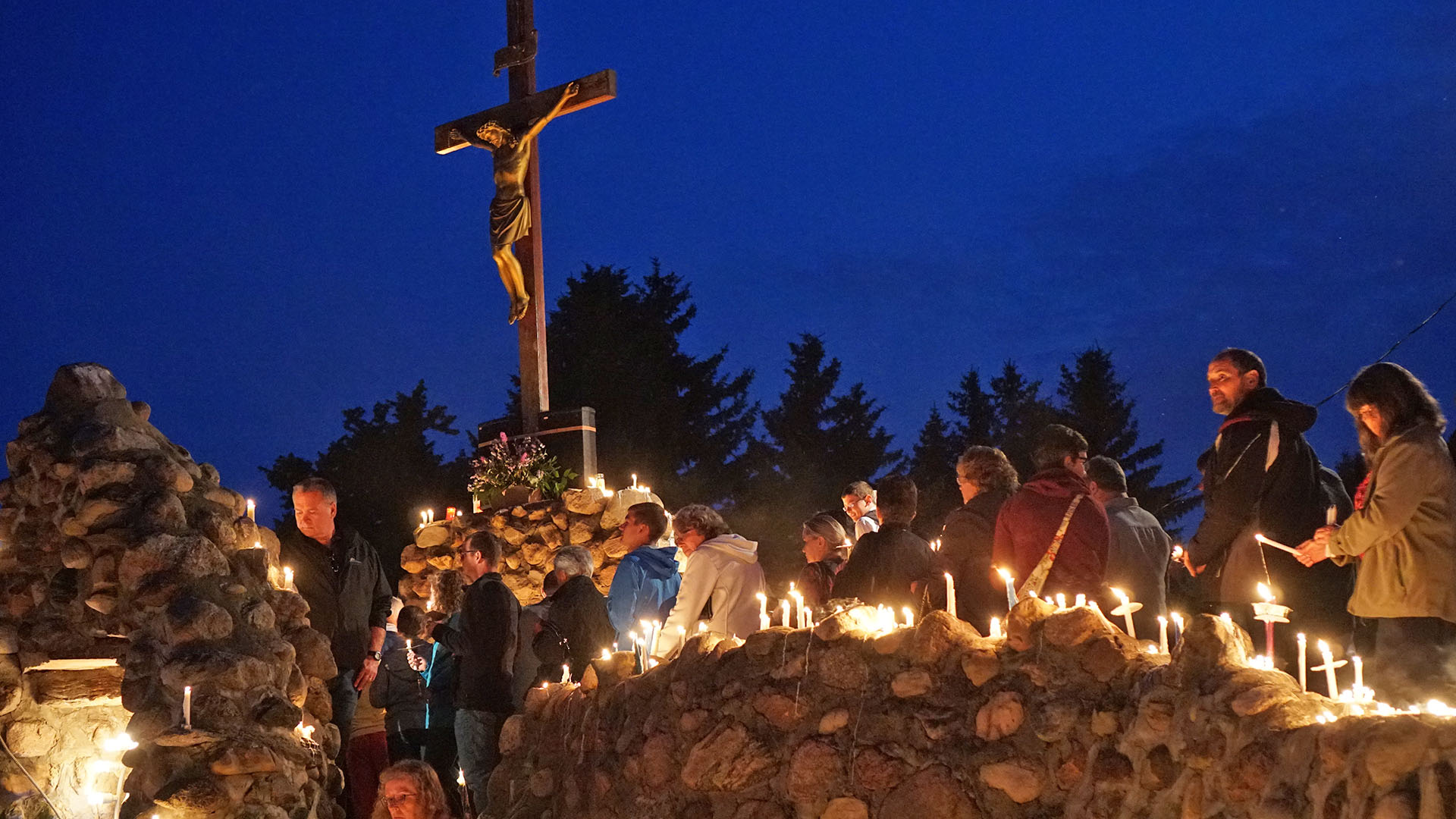 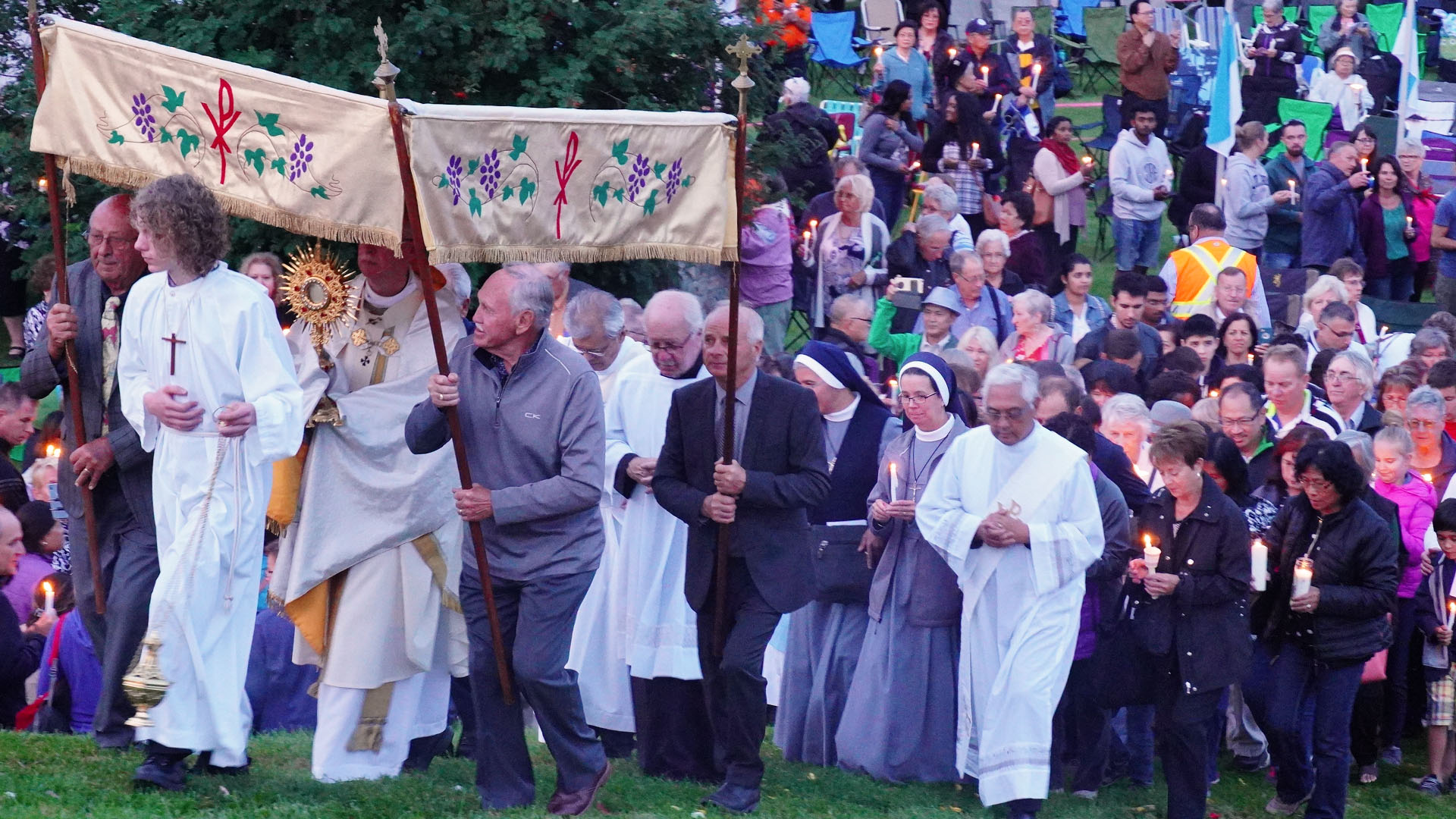 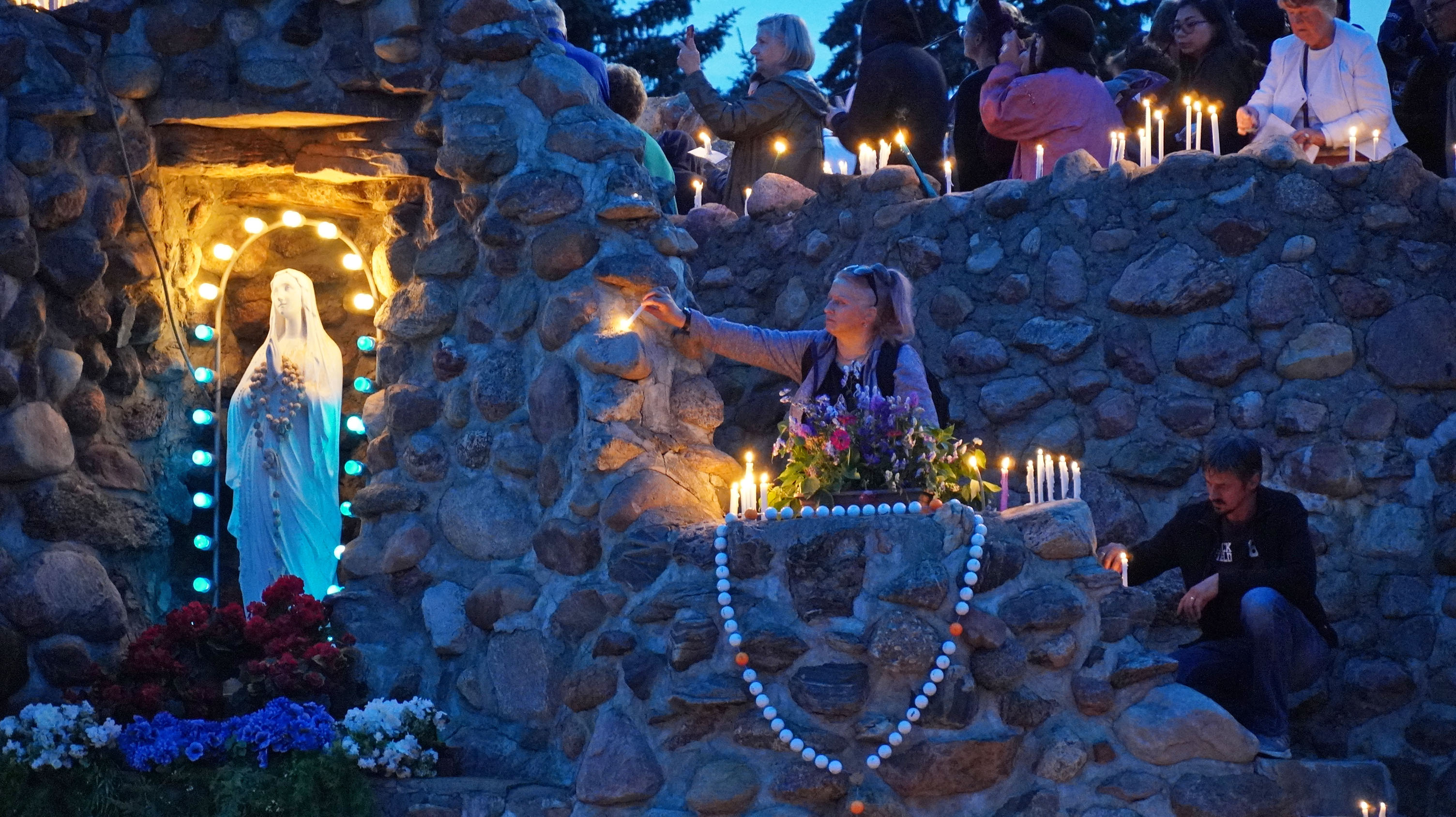 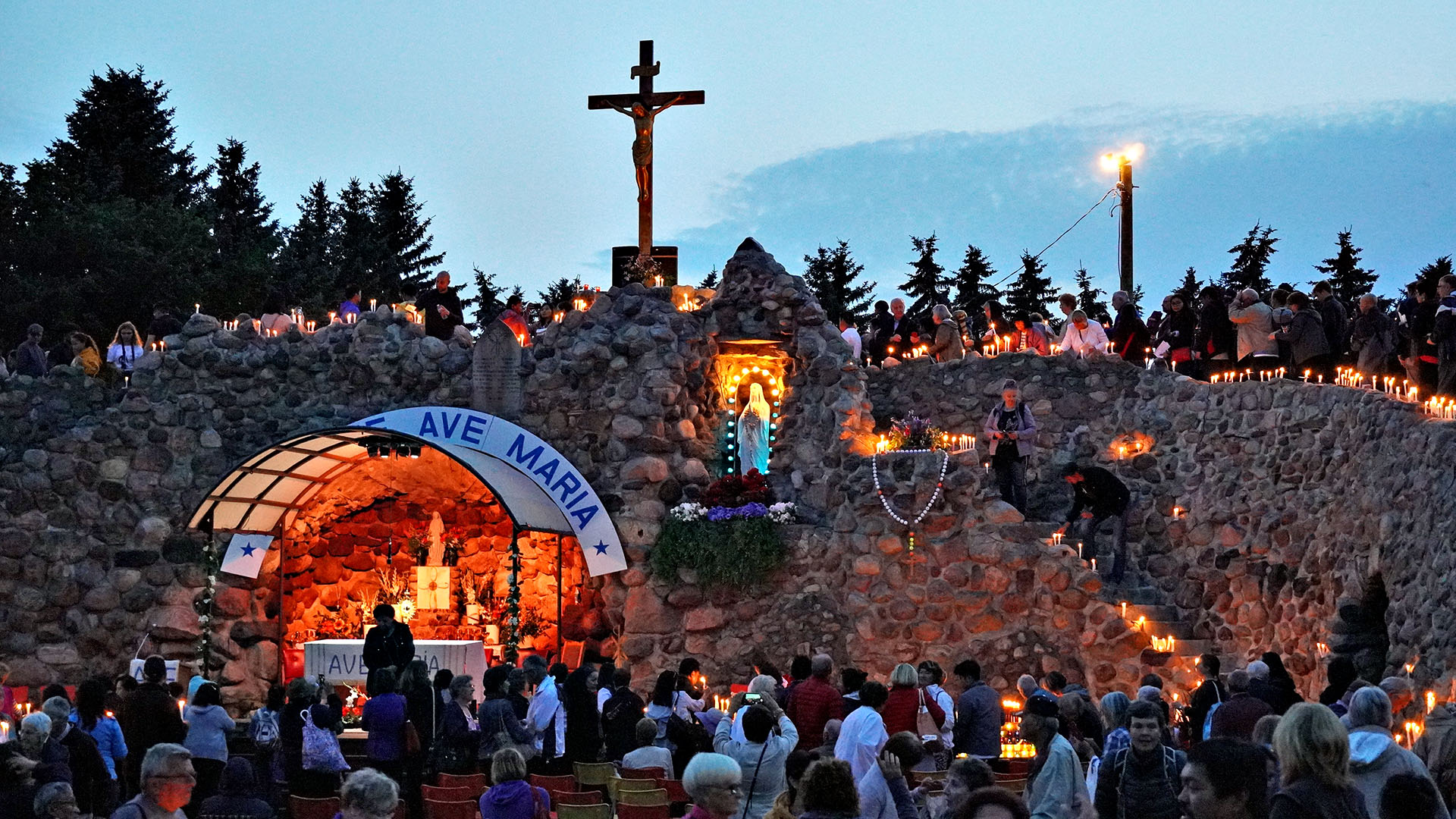 Pilgrims place candles on top of the Skaro Shrine grotto after the Mass. 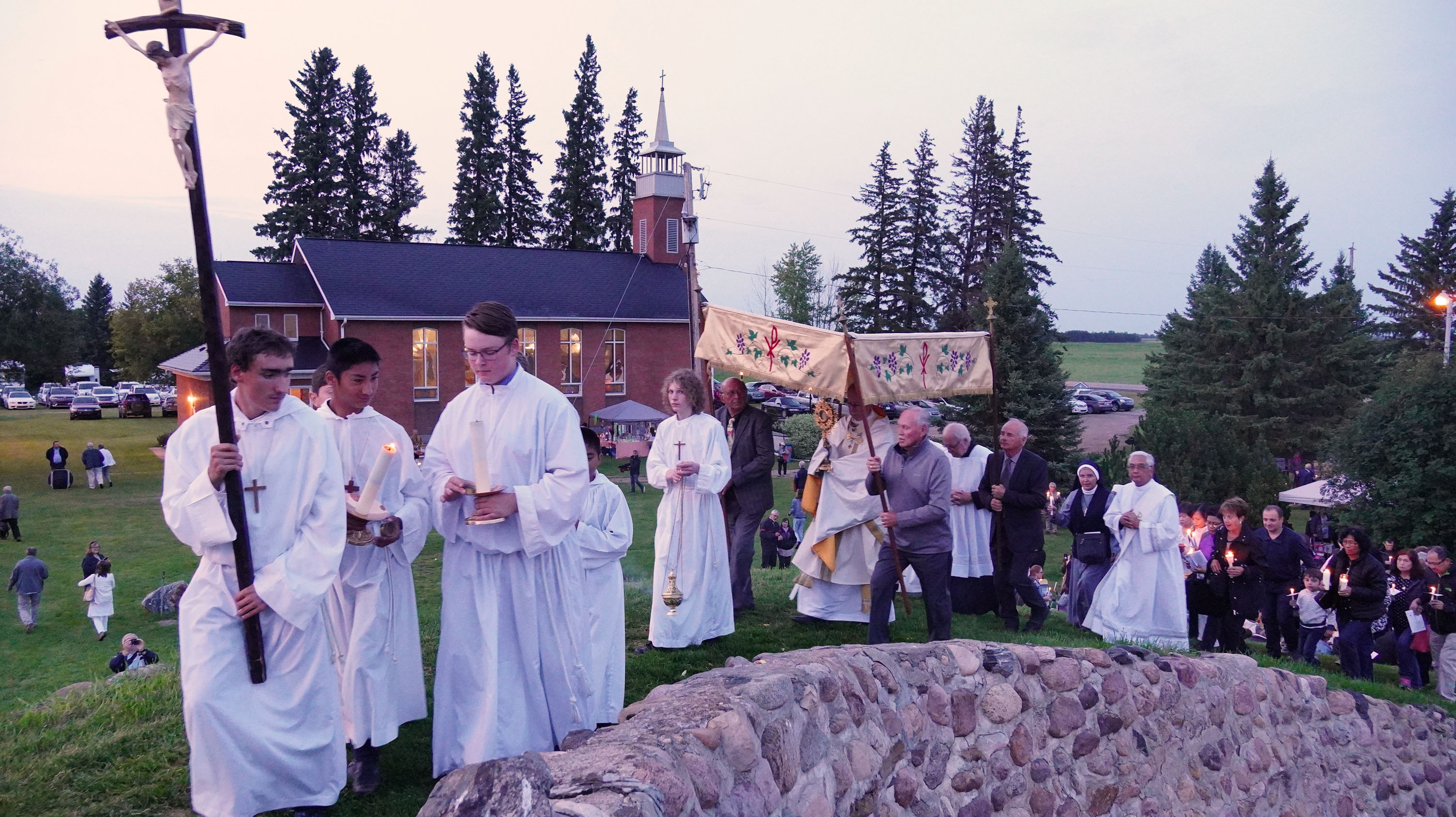 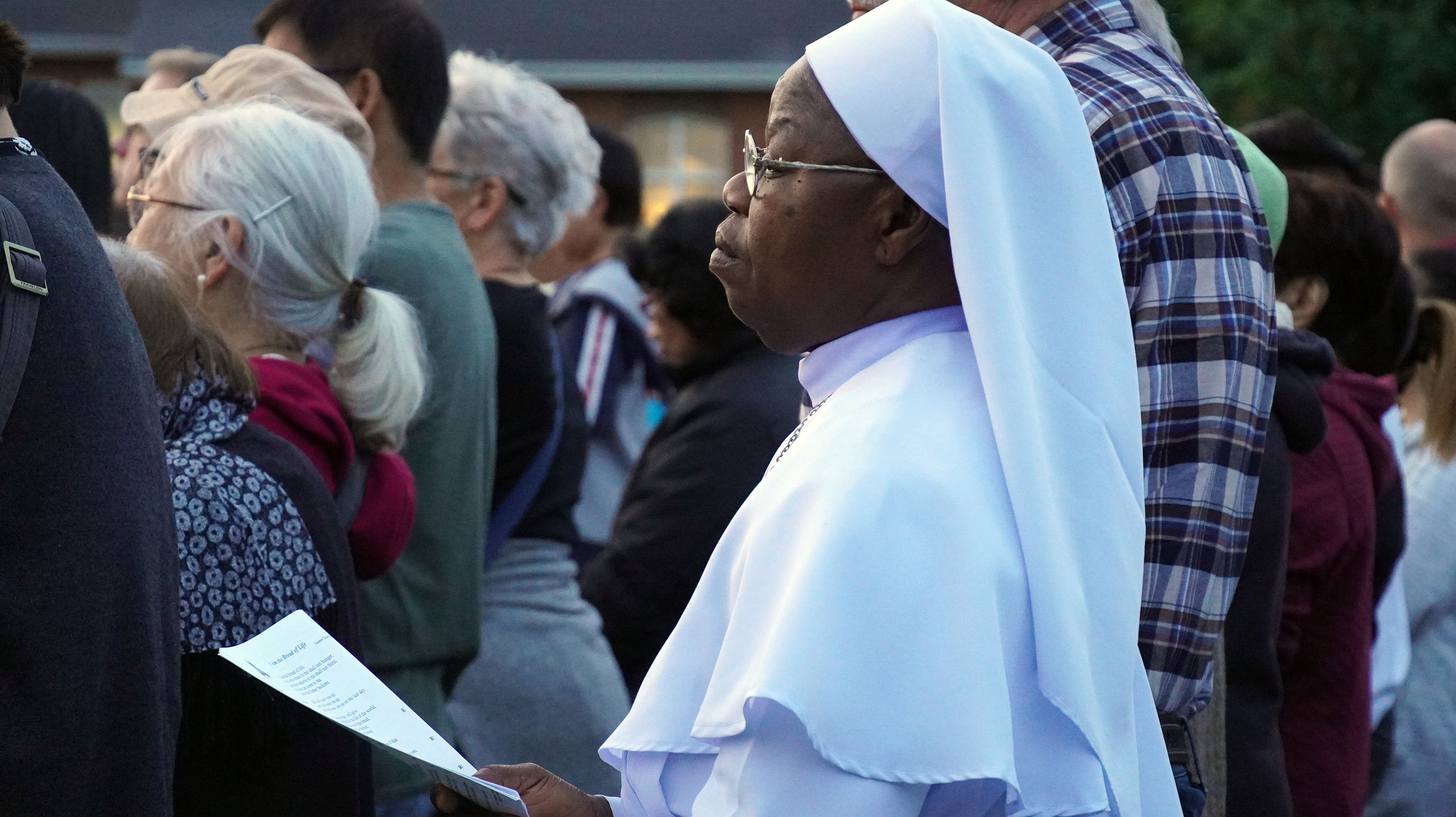 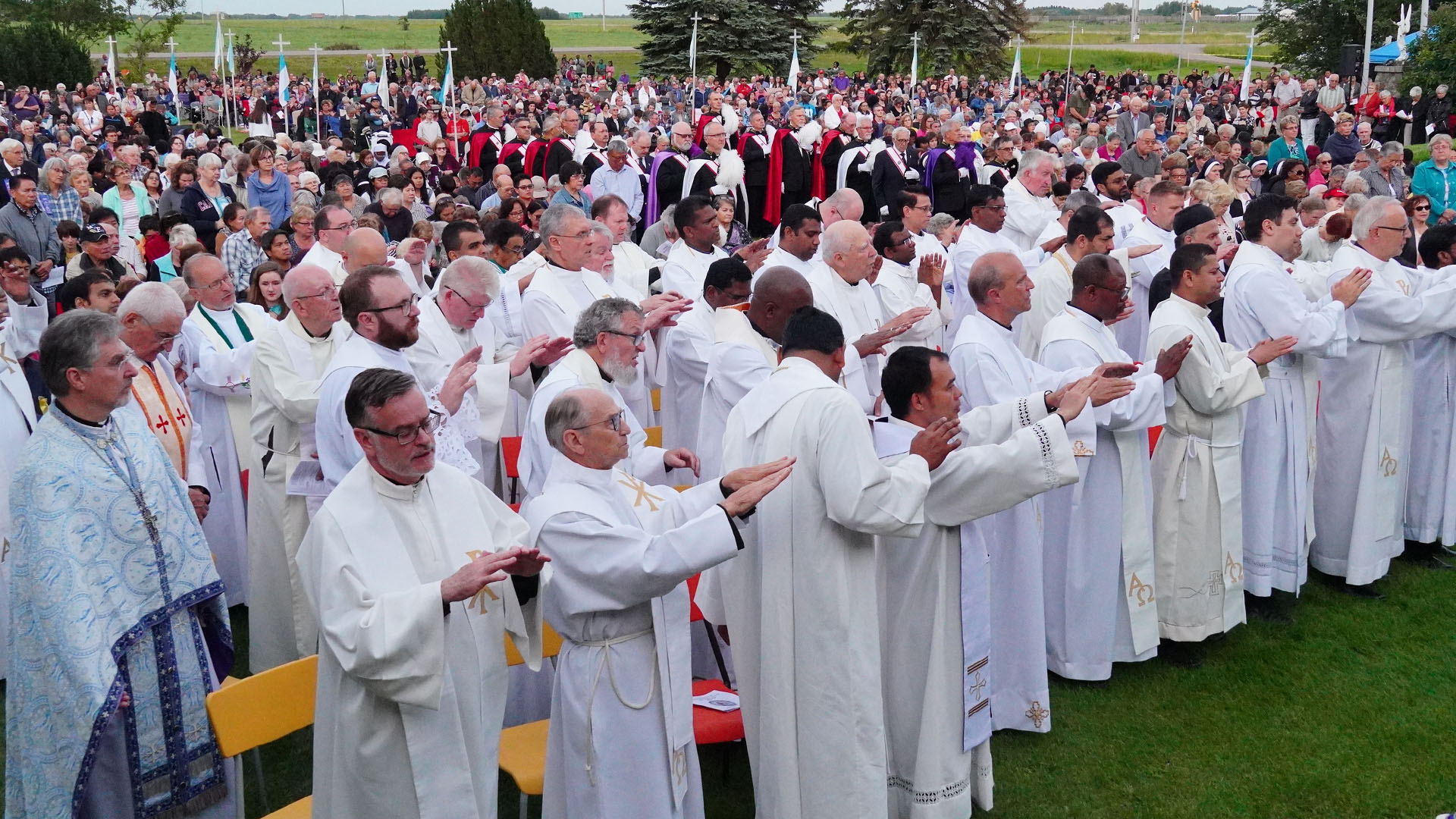 Priests across Central Alberta lay hands during the Eucharistic celebration at Skaro Shrine. 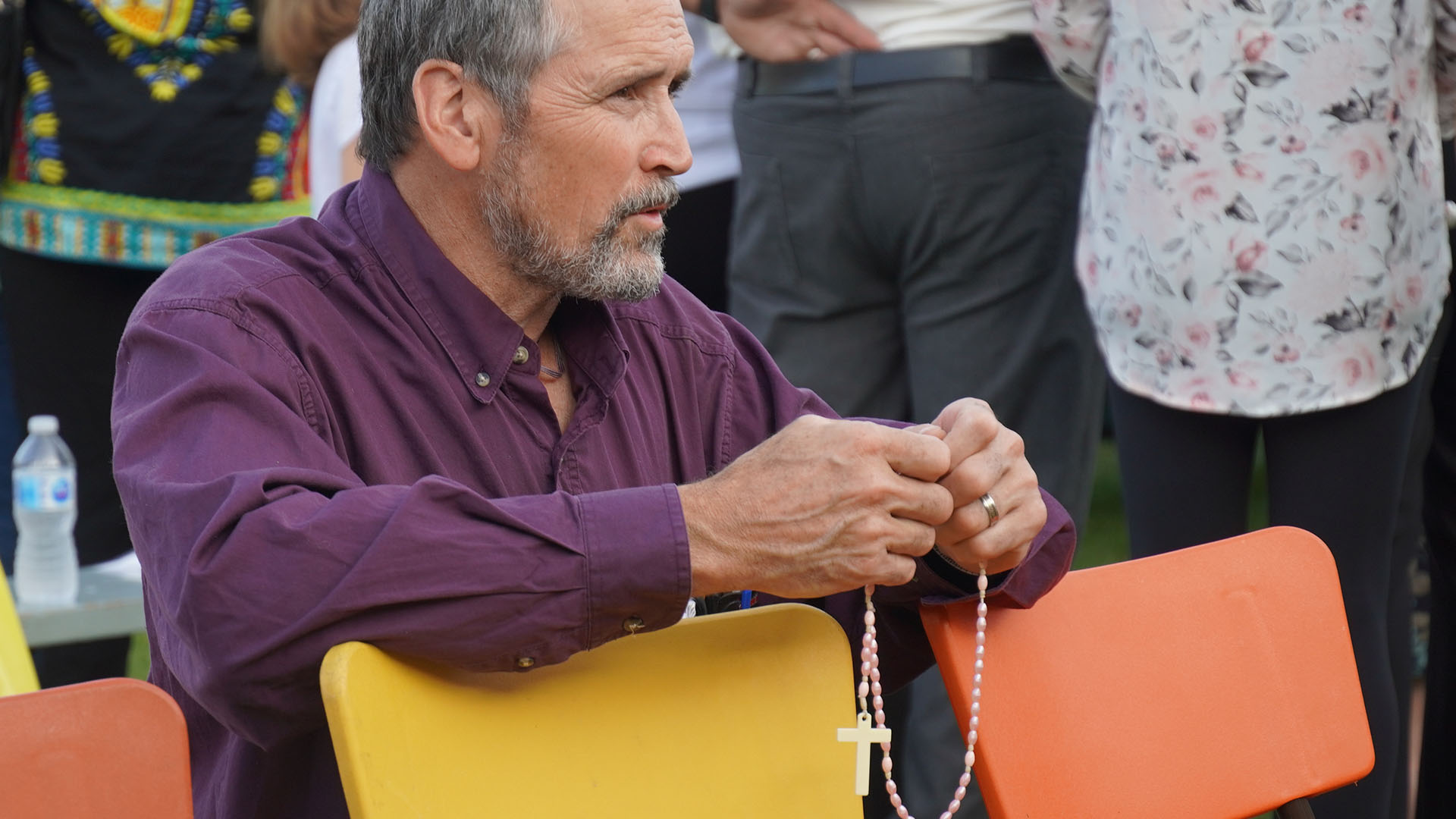 A man prays the Holy Rosary before Mass at Skaro Shrine.

A large Holy Rosary being carried into Skaro Shrine for a corporate prayer before Mass on August 14.

Helen Huculak’s life and spirit are deeply rooted at Skaro, the sacred site northeast of Edmonton that attracts thousands of pilgrims each year.

Whenever the 88-year-old looks at the shrine of the Blessed Virgin Mary and the stone grotto built around it, she’s not only reminded of her faith and ancestral ties to the area; it is also where she honours the memory of her sons. Edward, 12, and Donald, 10, were killed in a bus accident in 1965.

The annual Skaro Pilgrimage was always a special time for Huculak’s two boys. They particularly loved to run to the top of the grotto and look out at the crowd gathered there.

“The pilgrimage was very special to my children; they thought it was a glimpse of heaven,” said Huculak.

For the last century, the pilgrimage has attracted the faithful to the three-acre site in Skaro. Its shrine of Mary is a replica of the Our Lady of Lourdes shrine and grotto in France.

More than 2,500 people gathered together for this year’s Skaro Pilgrimage, held Aug. 14-15. On the first night, thousands of candles were set aflame and carried around the grotto, each one representing prayers and intentions offered to the Blessed Virgin Mary.

“This is a special day anyways, but it’s extra special for me because I feel their presence,” Huculak said, recalling memories of her late sons.

“I can sense where they’re going to be. It’s why I feel that there’s something beyond this world.”

Now in its 101st year, the pilgrimage is held before the Solemnity of the Assumption of the Blessed Virgin Mary. The feast day honours the assumption of Mary’s body and soul into heaven on the day of her death.

“I think this pilgrimage will be here forever,” said Huculak, whose husband’s grandfather, Matthew Huculak, donated the land for the shrine. “Religion meant so much to the people who settled this area, and that’s one thing you’ll always find here – people that are very faithful.”

The shrine and grotto were built by hand in 1918 by Polish and Ukrainian immigrants who settled in the area. Ever since, it has attracted pilgrims from all over the world.

“This may sound weird, because I’m younger than a lot of my parishioners, but it makes me feel like a proud father,” said Rev. Kristopher Schmidt, pastor of Our Lady of Good Counsel Church in Skaro.

“What they are able to organize and accomplish here every year, putting all their other duties on hold to honour this pilgrimage and this tradition of their ancestors – it’s pretty neat.”

As a direct descendant of the Polish settlers who built the grotto, 93-year-old Stanley Malica figures that if his father could see the Skaro Pilgrimage alive and running today, he’d definitely be impressed.

“It’s amazing how this is still standing more than a hundred years on,” he said. “I don’t think my father could have even dreamt of how popular it is today. The Church means a lot to me and my family. I see this pilgrimage continuing another 100 years because it’s so important.”

Last year, on the 100th pilgrimage, Archbishop Richard Smith designated Skaro as the Edmonton Archdiocese’s first official Marian shrine — a testament to the faith of those early pilgrims.

“One of the first things they did when they settled here is build this shrine to Our Lady,” Father Schmidt said.

“A lot of them came here with nothing, yet building this grotto was a priority. The importance of that was certainly passed on from generation to generation. It’s a gift — it shows our faith is rooted in something so much bigger than ourselves.”

That spirit is evident on the faces of many new and young pilgrims who come each year to celebrate their faith. Since he was a child, Jeffrey Schiller and his family have been coming from to Skaro from their home in St. Albert. For many years, it was something he did simply out of obligation. But now at the age of 22, this year Shiller has seen the pilgrimage through a whole new lens.

“In the past I’ve mostly been coming here because it’s just what my family does,” Schiller said.

“Understanding that this is around the Assumption of Mary and that this site here is over 100 years old, that it came from a small community of immigrants that had so much faith and desire to do this — it’s really cool to think about. Realizing that I’m now a part of this tradition that has been here for so long makes it very powerful.”

As he grows in his own faith, Schiller said he’s confident the pilgrimage is an event he will join for many years to come.

“Being more mature now, faith has become something I want to discover at a much more personal level,” he said. “I don’t imagine my family would ever stop coming here, but if something were ever to happen I would definitely come back each year on my own. The reverence in a place like this is really moving to me.”

At Mass on the first day of this year’s pilgrimage, thousands of people received communion and then knelt in silent prayer. Not a sound could be heard, aside from the low buzzing of dragonflies and the occasional transport truck rumbling down the nearby highway.

In his homily, Archbishop Richard Smith stood underneath the shrine of the Blessed Mother and spoke on the central role she plays in the Catholic’s journey to eternal life.

“In Jesus, the destination of eternal life is effectively promised, and in Mary, his mother, we see the promise fulfilled,” said Smith. “The blessedness of Mary arises most deeply from her attentive and obedient fidelity to all that God spoke to her. This, too, is to be the source of our blessedness.”

Rachel Atumisi, originally from the Democratic Republic of the Congo, discovered the Skaro Pilgrimage last year. She holds devotion to the Virgin Mary close to heart, seeing Mary not only as her spiritual mother, but as her role model.

Now returning for the second time, Atumisi said not only is her faith renewed, but also her dedication to spreading the word and bringing even more people next summer.

“This is like a boost to my faith,” Atumisi said as pilgrims placed their candles around the shrine. “When we bring our candles with our prayer intensions, I strongly believe the Lords hears us. In that burning candle — it’s like God is there. He is a light that kicks out the darkness and calls us to the light of life.

“I pray Mary will intercede and next year I will bring someone else with me. The more people that come here, the more graces will be received.”

Faith camps, conferences and events in limbo, leaders told in call with province