Skip to content
Archbishop Richard Smith is seen on his visit to the Naejang Temple in Korea’s popular "Maple Leaf Paradise" of Naejangsan National Park.Archdiocese of Gwangju

In Korean, there are ways to say — and show — respect and thanks in language and in deed.

Fresh off a five-day visit to South Korea, Edmonton Archbishop Richard Smith prefers the word ‘gamsahamnida,’ or ‘thank you.’ From Nov. 14-18, he visited the Archdiocese of Gwangju, which has sent  priests to minister at St. Jung Ha Sang – the Korean parish in Edmonton — for more than 20 years.

His visit included meeting Rev. Jeong Cheol Cheon, the current pastor of St. Jung Ha Sang Parish, who was on vacation there. The St. Jung Ha Sang community is estimated at 1,400, some of whom can only attend Mass only once a month because they live more than a four-hour drive away.

Archbishop Smith plans to celebrate Mass at St. Jung Ha Sang church on Dec. 1, meet with the parish community, and reflect on his first visit to their homeland.

“I was very surprised. It’s a historic moment for us,” noted Nicholas Kim, chair of the St. Jung Ha Sang parish council. “We’re very honoured that the Archbishop made this visit. We’ve been here for 40 years and this is the first time he’s visited Korea.” 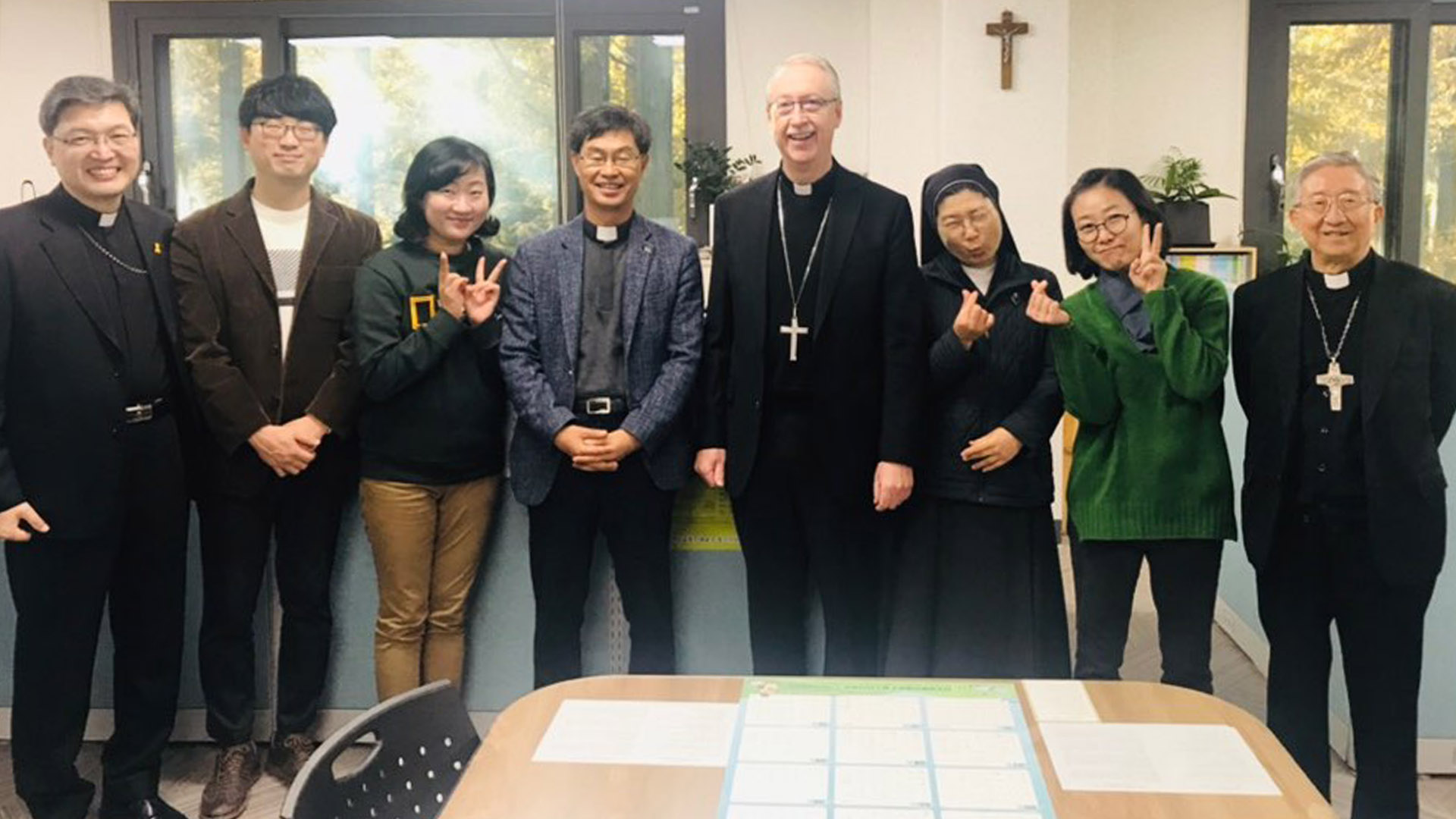 Archbishop is warmly welcomed on his arrival in South Korea, Nov. 14. He visited the Archdiocese of Gwangju, which has sent  priests to minister at St. Jung Ha Sang – the Korean parish in Edmonton — for more than 20 years.

The Archdiocese of Gwangju operates its own radio broadcasting corporation, Catholic Peace Broadcasting Corporation (Korea), which welcomed Archbishop Smith with a tour of their studios to share their many activities to announce the Gospel.

In Mokpo, the city where the Archdiocese of  Gwangju began, Archbishop Smith visited a beautiful large sanctuary and retreat/conference centre dedicated to Our Lady and to three Columban missionary martyrs to the faith. 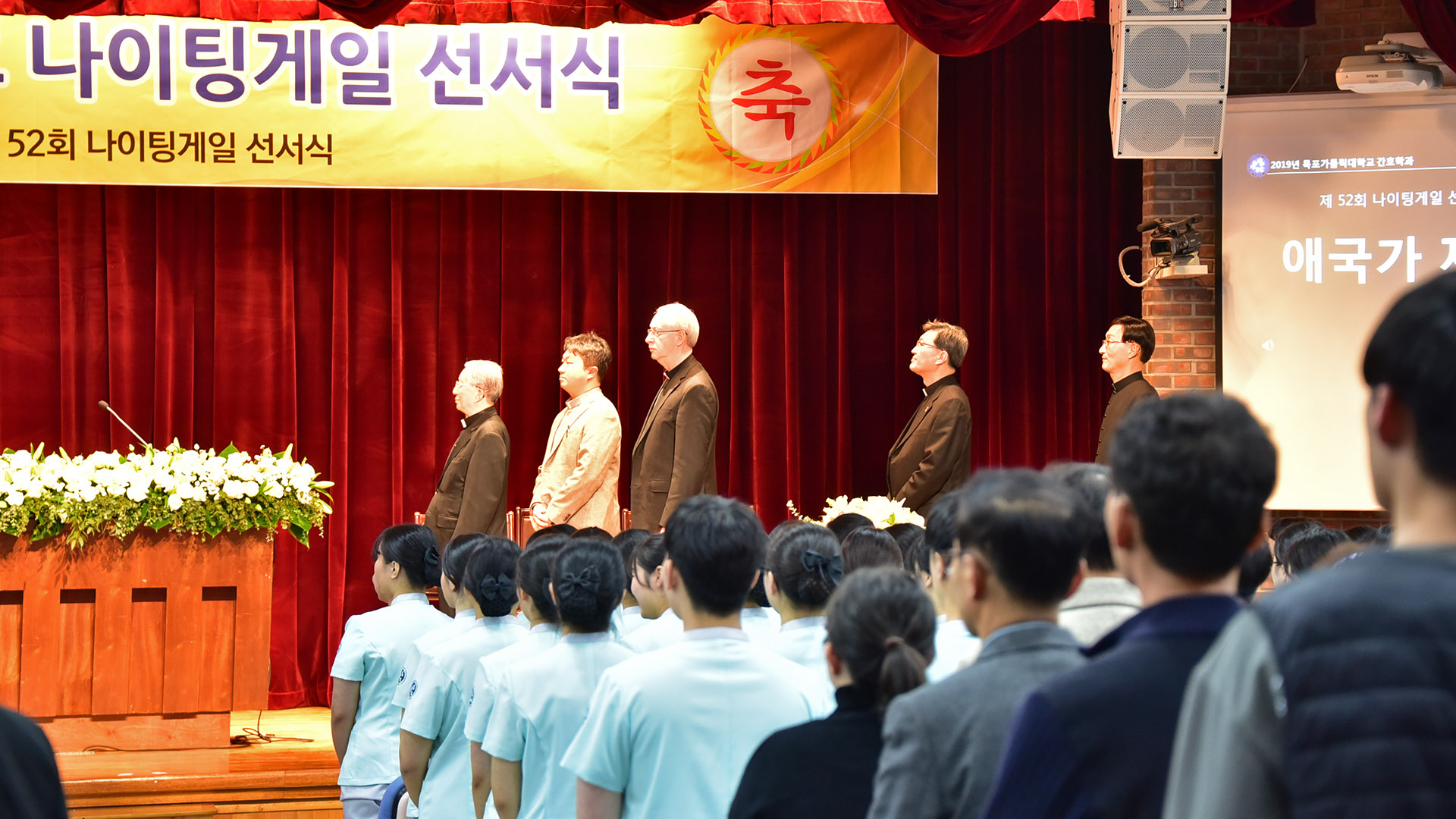 Nov. 15 was topped off by a visit to Mokpo Catholic University, where Archbishop Smith participated in a ‘Nightingale Pledge’-taking ceremony for the graduates of its nursing programme. 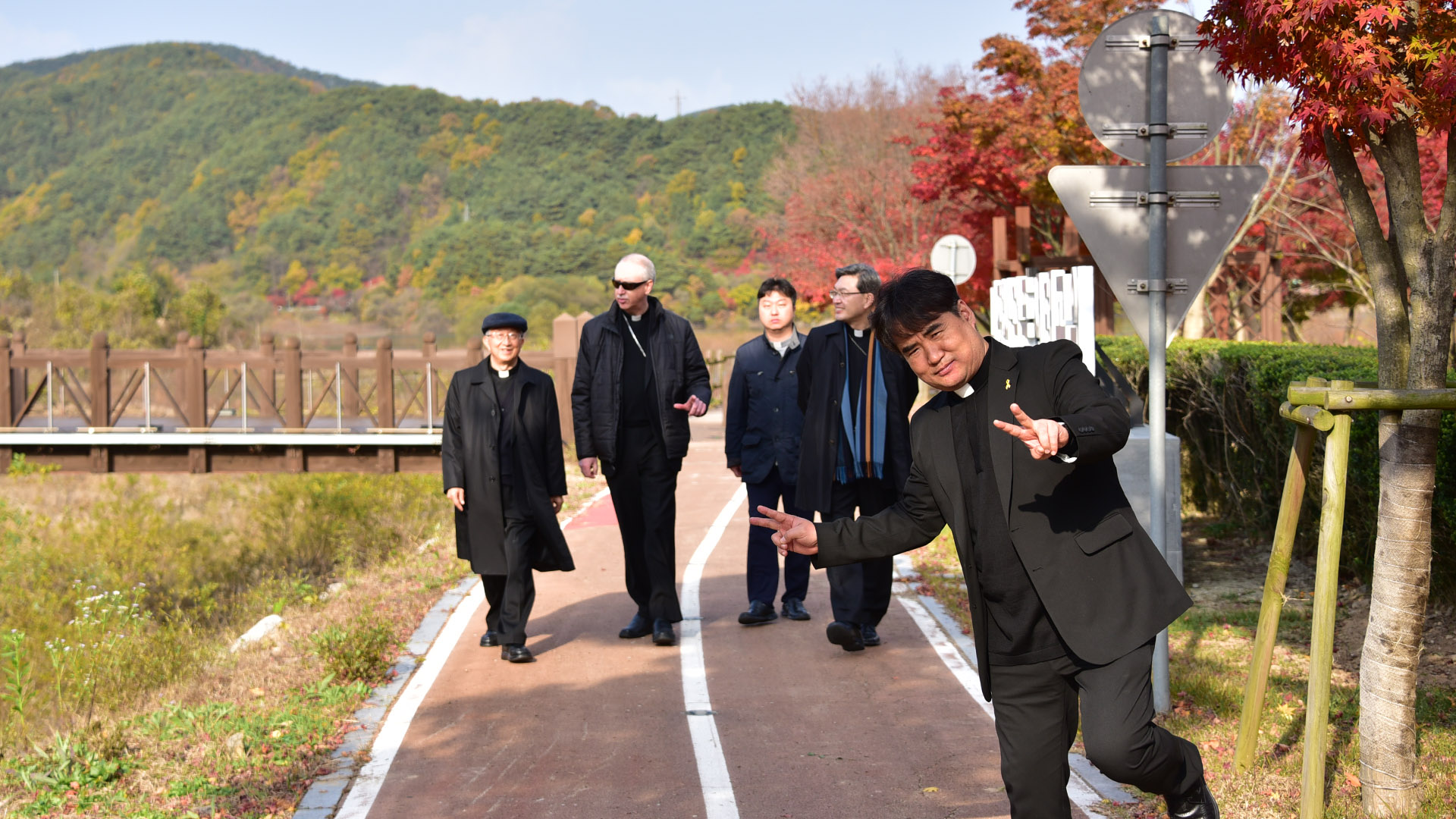 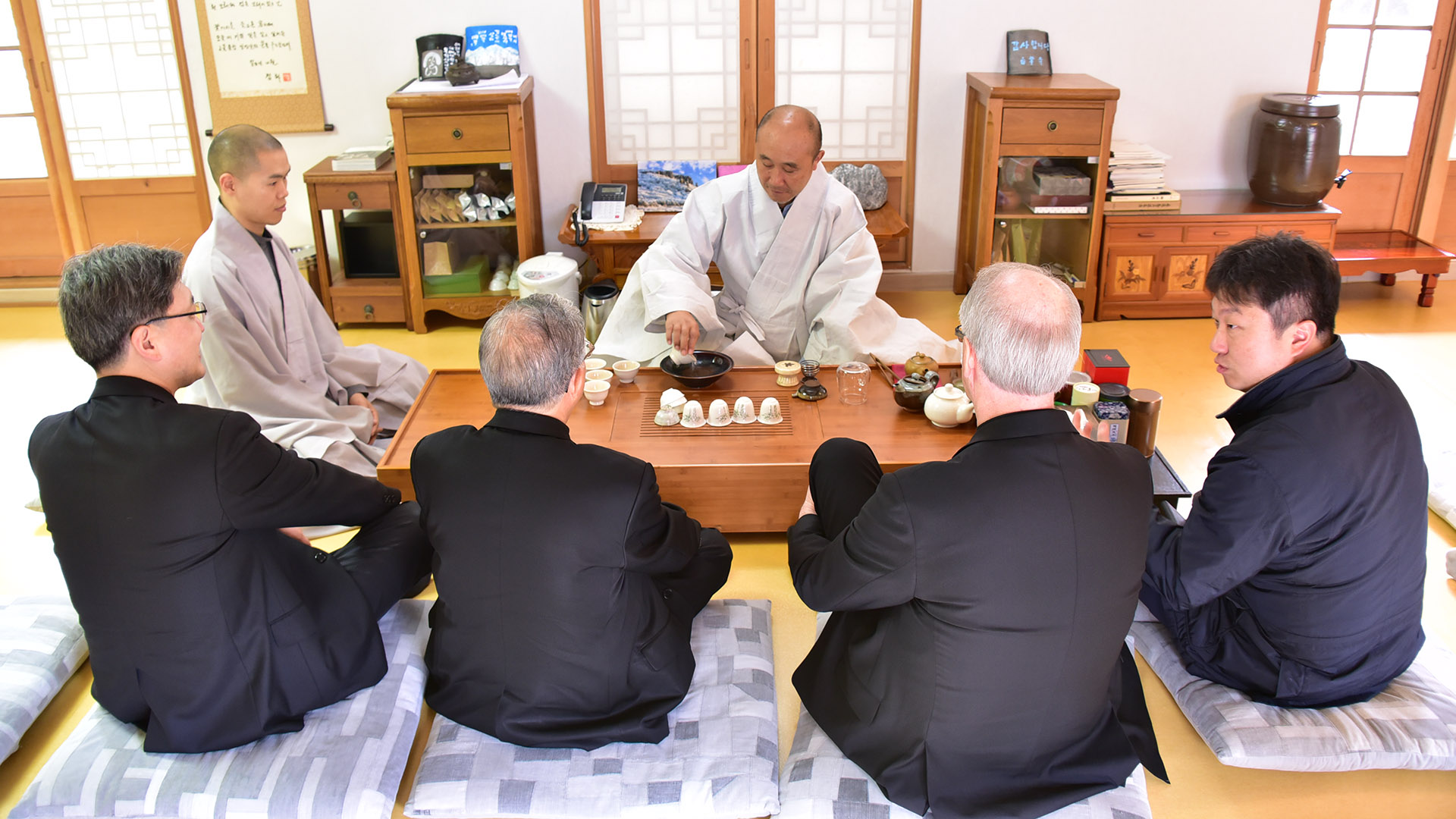 The visit to visit to Naejangsan National Park included a key Naejangsa Buddhist Temple, situated in beautiful Naejang Mountain national park, where he met with the head monk. 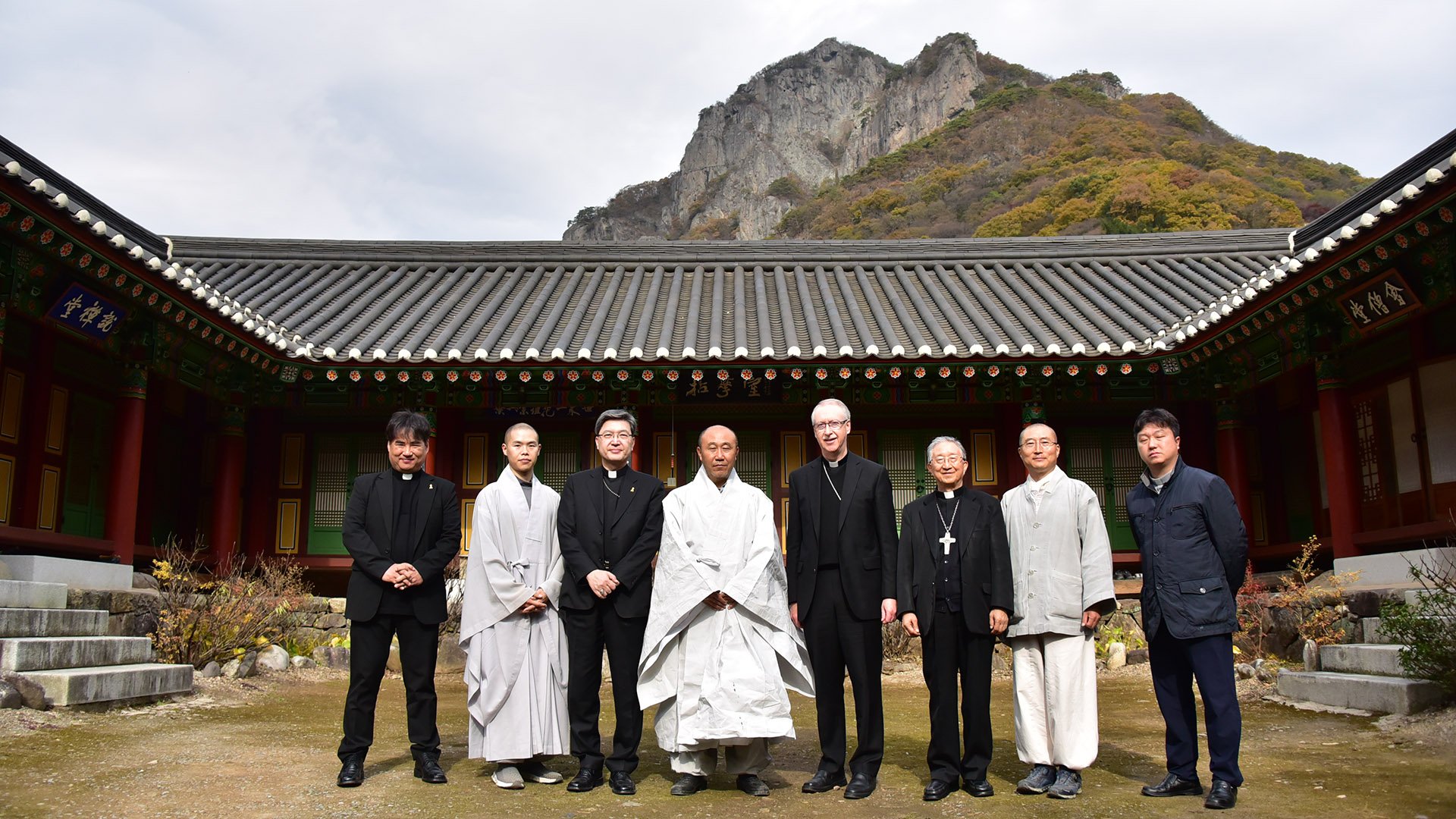 Archbishop Kim, who hosted Archbishop Smith, is known in South Korea and throughout Asia for his commitment to inter-religious dialogue. 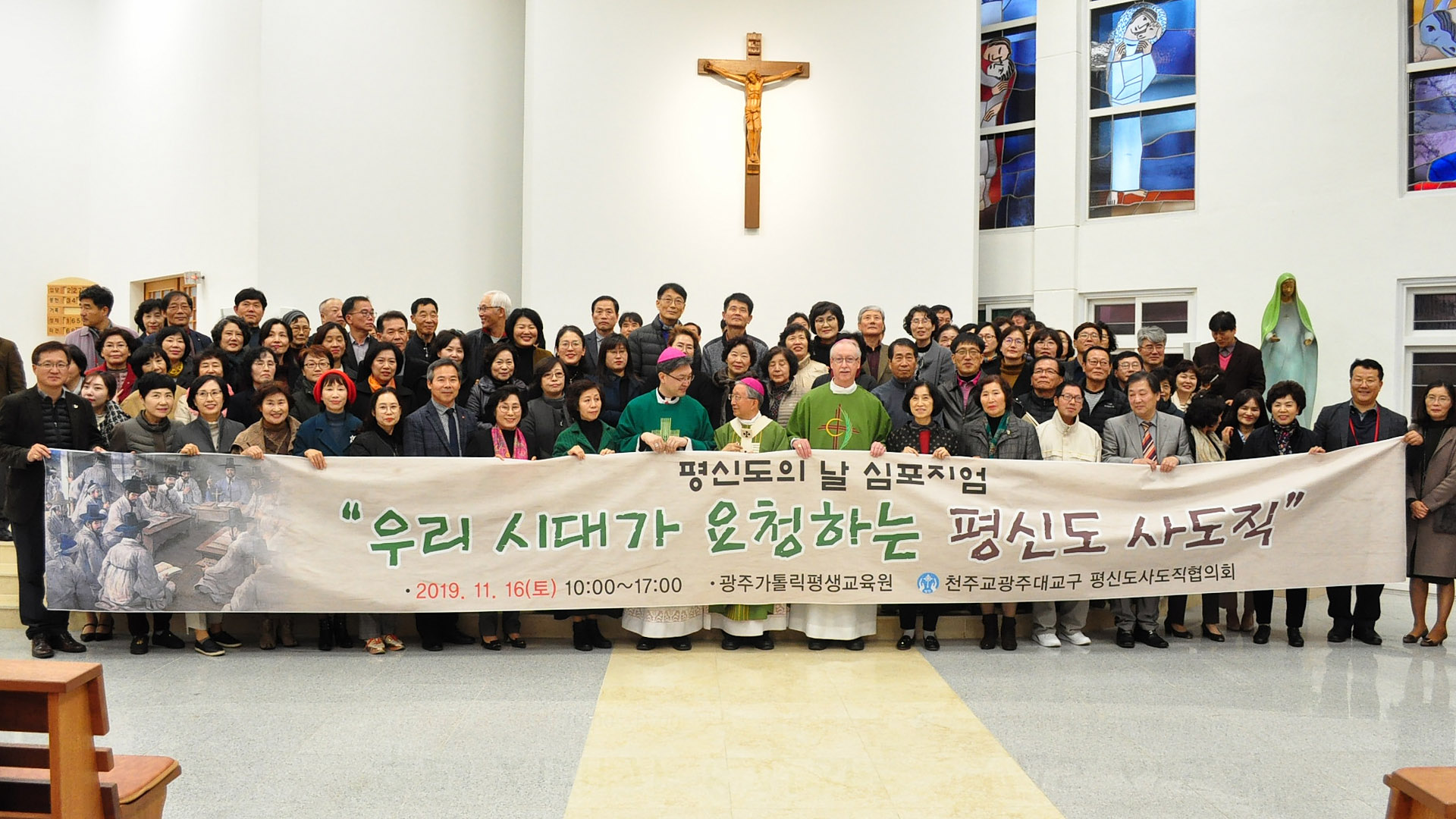 The Day of Laity Mass capped off the day of Nov. 16. 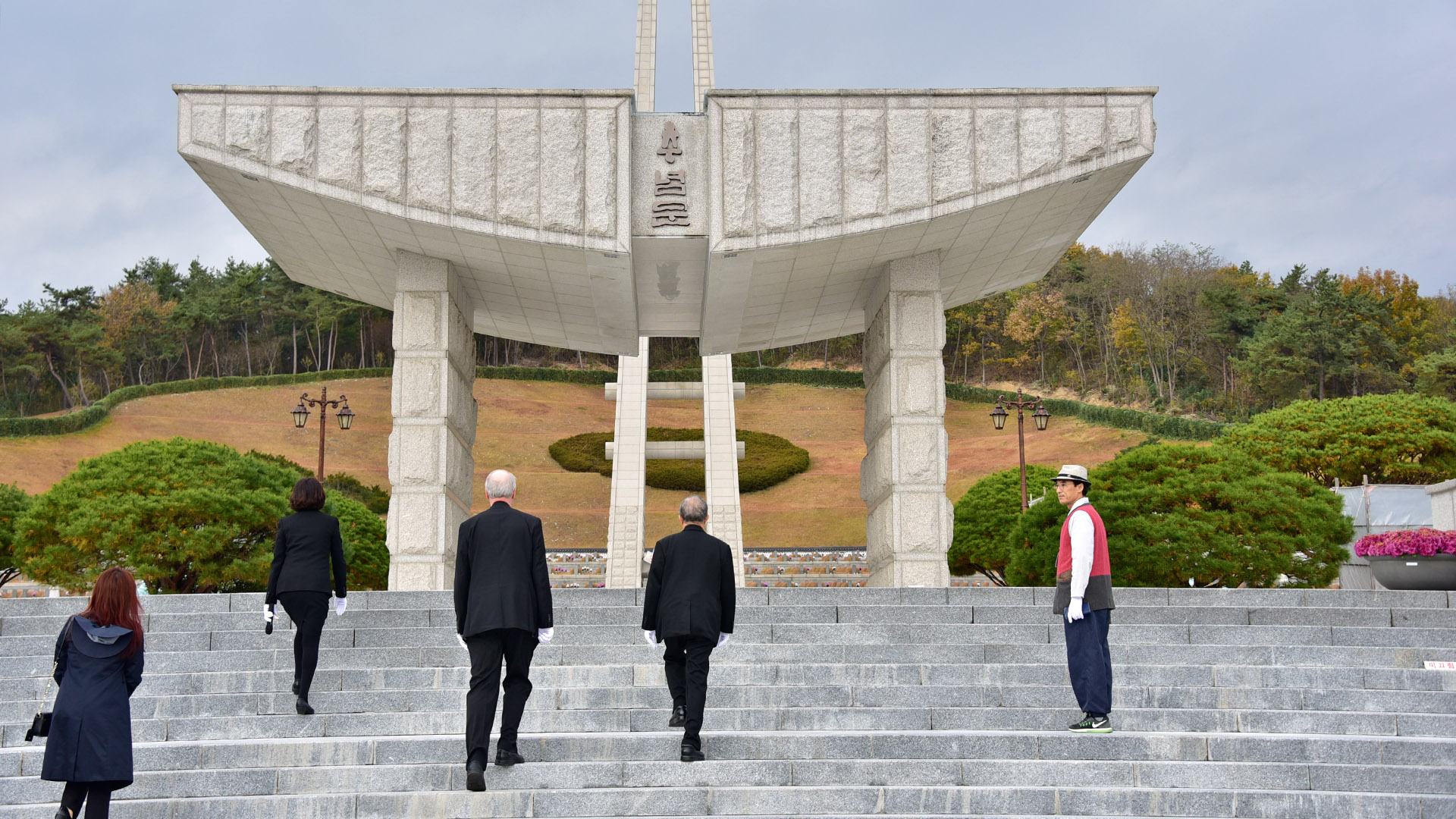 Archbishop Smith felt honoured to join with Archbishop Kim in a ceremony at the May 18th National Cemetery, honouring the memory of those who gave their lives for freedom. 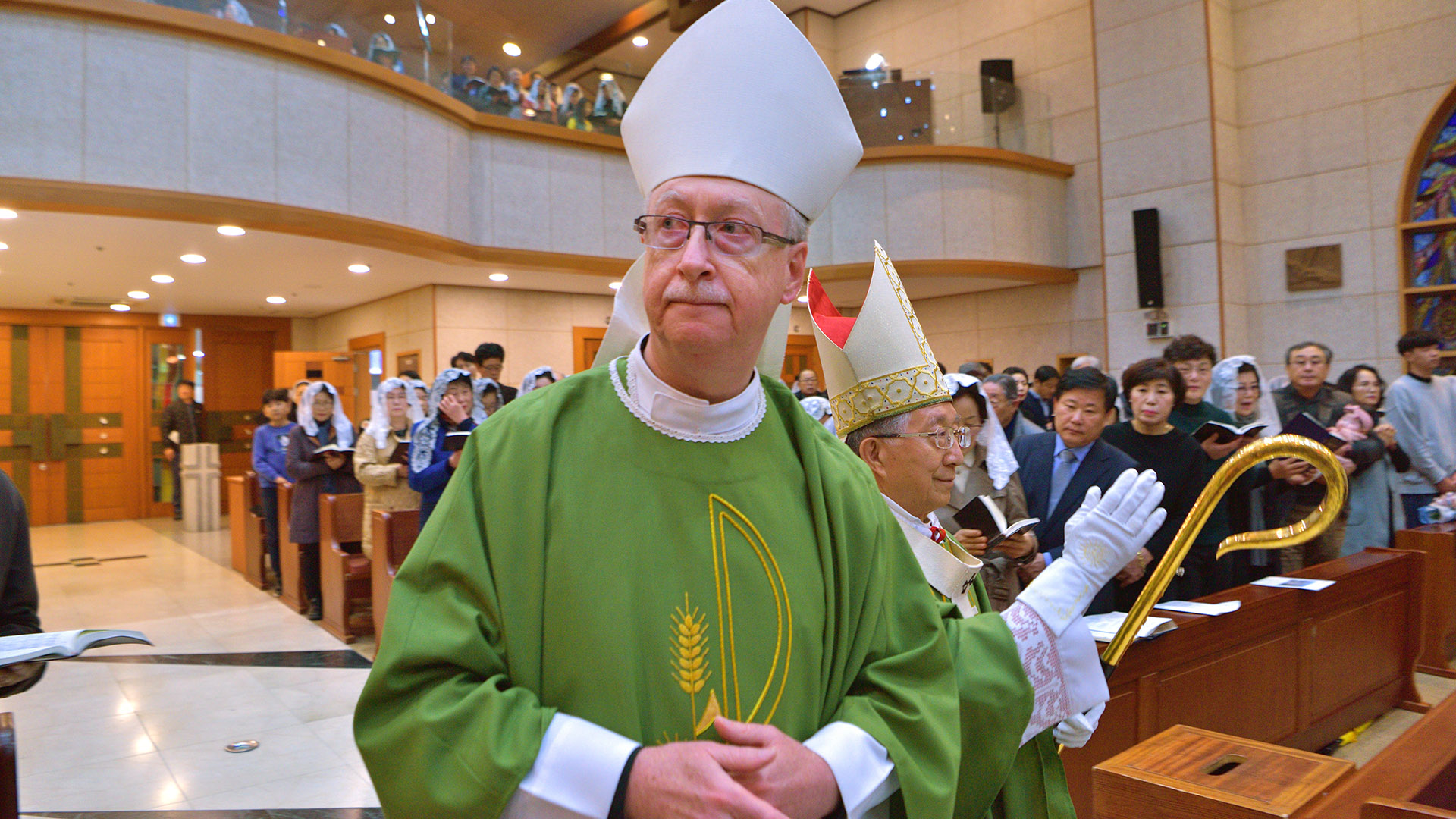 Archbishop Smith later concelebrated a Confirmation mass at St. Paul of the Cross parish with his host Archbishop Kim. 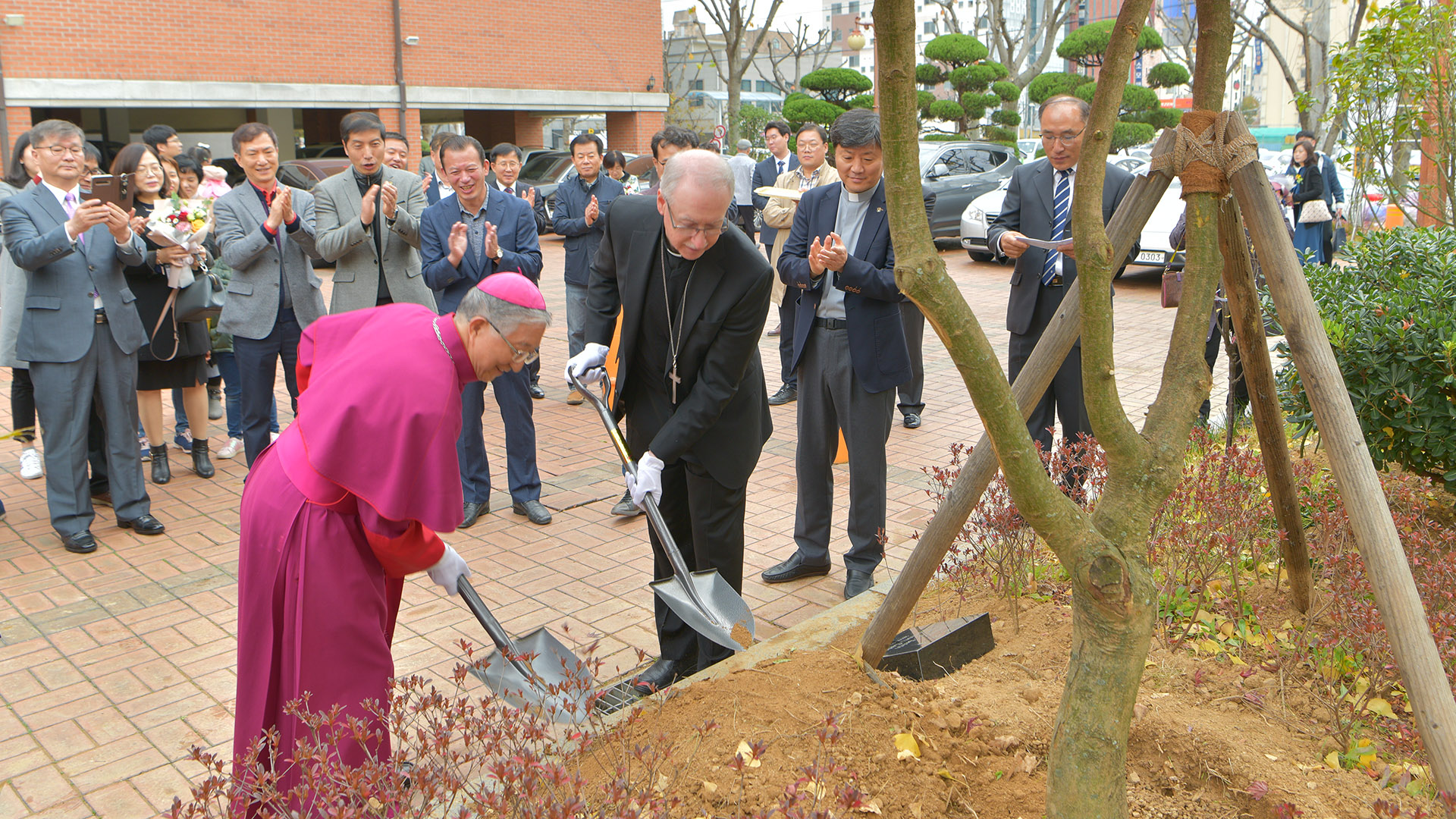 Following Mass, Archbishop Smith was invited to plant a maple tree in the parish courtyard as a commemoration of the visit and sign of enduring friendship between the two Archdioceses. 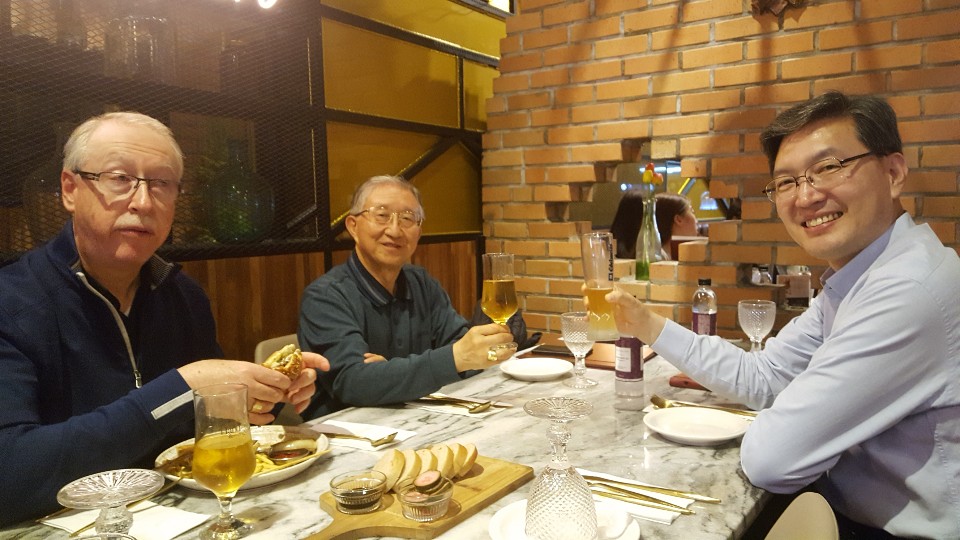 Archbishop Smith developed a keen taste for Korean food, and his Korean hosts showed such hospitality and respect that for his last meal in Korea, he was treated to his favourite food: hamburgers.

On the face of it, South Korea is an economic and technological powerhouse. Its leaders in industry — Samsung, Kia Motors, Hyundai, LG — are known worldwide. Its biggest export: electronics.

On a deeper level, Archbishop Smith said he was struck not only by the country’s hospitality but by a culture of honour and respect for the Church, and for each other.

“That really jumped out at me through the visual expression of the bowing. They do deliberately bow to one another, and not just any official, but to one another. Even that symbol of the bow shows a distinct difference in the culture,” Archbishop Smith said.

“They express thanks to one another, respect for another. I joked with them. I said when I get back to Edmonton, I’ve been bowing so much here, I’ll start bowing to everybody over in Edmonton!”

Nicholas Kim adds that respect for everyone, and for the Church, is passed down from the Korean diaspora to the younger generation: “This is something very special in Korean culture, even for people who have been here for 40, 50 years … Well, we’ll call it old-fashioned.”

Canada could, perhaps, use some of that.

“We’ve lost sight of as culture of respect,” Archbishop Smith said. “Ours is becoming a culture of bickering. If you just look at what’s happening through social media, or even recently in our federal election leaders’ debate, it’s the quibble. It’s the bickering. It’s the talking past one another, the talking at or shouting at one another rather than taking the time to listen to one another.

“We’d be hard-pressed to say that we’re, broadly speaking, maintaining a culture of respect here.”

Gwangju is a city of 1.5 million south of the capitol Seoul. While Archbishop Smith was there, he visited some of the sacred sites of Korea. The Jeoldusan Martyrs’ Shrine, recognized as an international pilgrimage site, honours St. Andrew Kim Taegon, the first Korean-born Catholic priest, and other Korean martyrs.

Archbishop Smith prayed in the chapel, which contains the remains of 28 martyrs. Pope St. John Paul II had also paused to pray there during his visit to South Korea in 1984.

Archbishop Smith also visited Seosomun Martyrs’ Shrine in Seoul, a sanctuary dedicated to the memory of St. Jung Ha Sang (aka St. Paul Chong Hasang), the patron of the Korean parish in Edmonton.

On the final day of his trip, Archbishop Smith concelebrated with Gwangju Archbishop Kim Hee-jong Kim at St. Paul of the Cross Parish.Archdiocese of Gwangju

During his visit, Archbishop Smith celebrated Mass with seminarians; another time was against the backdrop of a lay congress. On the final day, he concelebrated with Gwangju Archbishop Kim Hee-jong Kim a Confirmation mass at St. Paul of the Cross Parish and confirmed many young people and adults.

The Korean culture of respect extended to Mass itself.

“The singing is robust. But you can also, it’s almost tangible, you can feel the profound spiritual reverence in the people for the Eucharist, for the Eucharistic presence of the Lord,” Smith said.

“Sometimes our celebrations here can be almost like communal gatherings of chatting with one another. You kind of wonder where that sense of reverence is at times, not always, but at times. There it seemed very, very markedly present, in a way that you could feel it.”

Although half a world apart, the Gwangju and Edmonton archdioceses face similar challenges of living in an increasingly secular society, and a flock that nominally identifies as Catholic.

The two archdioceses also anticipate learning from each other.

“(Archbishop Kim) is very insistent, with his people, on carrying forward the missionary endeavour that was highlighted in October as Extraordinary Missionary Month. If we’re able to listen to that, and see what might that mean for us here, it could very, very instructive,” Smith said.

As in Canada, the Catholic community is a minority in South Korea. Only about 11 per cent — or roughly 5.8 million — identify as Catholics. One of the largest faith groups is Buddhist, and Archbishop Smith’s trip included a visit to a Buddhist temple. Interreligious relationships are a priority there as they are in Canada.

“That’s an issue we have to pay more and more attention to here. Our relationships with other faith groups are very good. What I’ve picked up in our mutual relationships and the various encounters we’ve had together is a desire to strengthen those further and to make the good relationship increasingly visible to our society,” Smith said. “That for our society, and so many people, is a sign of real hope.”

What the future of the relationship looks like is yet to be determined. Archbishop Kim suggested a sharing of pastoral letters and information to learn from one another. Archbishop Smith has sent a copy of his own pastoral letter, Living in the Word.

The Korean peninsula has been split into the democratic south and communist north since the end of the Second World War. And although politics did not come up specifically, Archbishop Smith visited the May 18th National Cemetery.

The Cemetery contains more than 700 graves and is a testament the 1980 Gwangju democratic uprising against Chun Doo-hwan, the general who ruled South Korea at the time.Archdiocese of Gwangju

Its significance is “deeply etched in the psyche” of the people there, Archbishop Smith said.

“That was a turning moment in the history of the people that led eventually to watch what they have now, a functioning liberal democracy,” he said. “Largely because of that uprising, the people of the South Korea – and it’s very much in the minds of the Catholics there – are very keenly attuned to issues of justice. That really struck me as a deep concern of theirs, growing out of this act of rebellion against injustice.”

Reflecting on his trip, Archbishop Smith said what he’ll remember is the generosity of his Korean hosts.

“I’d have to say the memory that sticks out the most is the hospitality of the people there, and the graciousness of the people. It was extraordinary,” Smith said.

“They pulled out all the stops, far beyond my expectations. They just really welcomed me with wonderful open arms and I’m not going to forget that. My sense is that the overarching motivation behind is that’s who they are, just a welcoming, respectful people.”

While Archbishop Smith developed a keen taste for Korean food, that sense of hospitality and respect  carried forward even to his last meal. They asked him about his favourite food: hamburgers.

“Well, they wouldn’t rest until they found this restaurant in downtown Gwangju that served up great hamburgers,” he recalled.

On the last night of the trip, Archbishop Kim, his auxiliary bishop, a couple of priests – including former pastors of St. Jung Ha Sang Parish in Edmonton — went to dinner.

“They wouldn’t rest until they took me out to this place so I could have a hamburger and fries. And it was good … I noticed that nobody else in the group ordered a burger and fries!”