We are all called to a mission that never stops.

That was the theme of Archbishop Richard Smith’s speech at the inaugural Archbishop’s Dinner Oct. 4 at the Edmonton Convention Centre.

It was an opportunity to celebrate and honour the breadth and depth of the Catholic community in the Edmonton Archdiocese,  from its humble beginnings more than a century and a half ago to its present successes and challenges to hopes for the future. More than 1,100 attended the sold-out event, which included musical entertainment by the Msgr. Fee Otterson Junior High School Choir and seminarian pianist Reed Miller, video presentations, and the trademark humour of Tim Spelliscy in the role of master of ceremonies.

Joan Hertz and Father Jim Corrigan, who co-chaired the dinner committee, paid tribute to the Archbishop in their introduction and assured him that “you need to know your flock loves you.” The sentiment appeared to be reflected in warm applause throughout the Archbishop’s speech.

“It is a beautiful thing to be a Catholic. It is especially beautiful to live out that Catholic identity here in the Archdiocese of Edmonton,” Archbishop Smith said in a wide-ranging speech that focused on the Catholic people in the local parishes and in institutions of education, health and social services.

“The missionaries before us would have set their gaze upon a vast and undeveloped landscape, with little for resources other than what they were able to bring with them. Yet, even though in one sense they had nothing, in another they had everything,” Archbishop Smith said.

“Their resource was their faith, their absolute trust in the providence of Almighty God. This faith furnished them with the conviction that, if God had sent them to preach the Gospel and establish the Church in this region, then He would surely provide whatever they needed as it was needed.”

In the century and half since, future generations have picked up the torch and run further. There are 153 priests in the Archdiocese, and 27 communities of religious women who teach, provide pastoral assistance, run day care and lead retreats, and more than 200,000 lay people who share the local Church. Sixteen of 36 men at St. Joseph Seminary are currently studying for priesthood for the Archdiocese of Edmonton. All 36 took the stage to offer Grace before the meal, sung in Latin.

By seeing a need and meeting it, Catholic people have created institutions that serve all Albertans. Covenant Health is today one of Canada’s largest health care providers, and Catholic Social Services one of its largest social agencies.

“Now we, the missionaries of today, are also called to foundational work, namely, to recover the moral foundations that ground our lives as individuals, families and province, and underpin them with real hope,” Archbishop Smith told the assembled guests.

Archbishop Smith described the local Church as one founded by missionaries and still remains a missionary community. “There is a desire to serve, to address the many problems we face with the truth and hope of the Gospel.”

But the achievements of Alberta Catholics have not come without challenges to remain steadfast to tenets of the faith, Archbishop Smith noted. He cited the call by critics for Catholic hospitals to provide assisted suicide or euthanasia.

“We are Catholic, we make no apology for it, and will simply not tolerate anything that runs counter to our Catholic mission and identity,” Archbishop Smith said.

For the faithful at the event, that declaration was a welcome confidence booster.

“It’s hard because you have to stand up against the morals of society and you have to live your faith everyday,” said Roni Iwanciwski, a pastoral assistant Our Lady of the Foothills Parish in Hinton.

“We’re almost counter-cultural. But we press on because we want to bring Christ to others, to be the hope that needs to be out in that world.”

Archbishop Smith said: “We must become fully what we are, we must be Catholic. This means a joyful proclamation in word and deed of Jesus Christ as the only secure cornerstone of life ̶ Jesus Christ known, contemplated and loved – and a full embrace of our call in him to be holy, to be a communion and to be missionary. By being fully the Catholics that God has called and made us to be, we who have received a beautiful missionary legacy will make one of our own to hand on to future generations.”

Maria Killoran, a newcomer to St. Stephen’s Parish in Olds, used an analogy of her former parish in Ontario to describe the challenges facing the Church.

“In the parish we used to be at there was a stone wall in front of the parish. It was falling. It was crumbling. It had to be renovated. And that reminded me of what is happening to Catholicism today. There are a lot of holes.  There’s a lot of cracks. The foundation is crumbling. We really need to be behind our Archbishop and build the stone wall again.”

That building occurs in a multitude of ways through the Archdiocese.

Rym Khawam, her husband Mansour Tarabishi and their three children came to Edmonton with the help of St. Thomas More Parish in Edmonton. The parish’s refugee sponsorship program has helped 19 families settle in Canada since 2016.

Khawam and her family arrived in Canada in December 2015 after fleeing the war in Aleppo, Syria. It was a difficult decision to leave their homeland for an uncertain future, but one thing was sure.

“We prayed and we asked the Lord to orient us. And we left ourselves in the Lord’s hands,” Khawam said. “When we left, we didn’t have any other plan. Our faith was the basic stone on which we moved.”

Bridge building also continues between the Catholic and Indigenous communities in Canada. Archbishop Smith also acknowledged First Nations and Métis elders and leaders at the dinner and said that working with them is a priority for him personally and for all of Canada’s bishops.

“They have much to teach us about how we in Canadian society can learn to live together and respect one another,” Archbishop Smith said. “Reverence for the Creator, respecting the land as God’s gift, listening with patience to the stories of the other; these have become lost to Western culture and we need to learn them again.

“The Indigenous peoples can show us the way.”

At the same time, Archbishop Smith has been a leader at the local level, said Chief Tony Alexis of the Alexis Nakota Sioux Nation, west of Edmonton, where the Catholic faith is “very strong.”

“There’s a lot of work that we have to do and a lot of reconciliation that we’re working towards,” said Chief Alexis, a guest at the dinner. “The history is difficult but we don’t hinder. We don’t balk. Whether it’s a stormy day or it’s sunshine, we have to approach it with the ideal of having faith first.”

In further addressing the future, Archbishop Smith made particular reference to young people. There are 10 Catholic school districts in the Archdiocese educating more than 86,000 students, and he said he was proud of how those schools nurtured their Catholic identity.

“Finally, the call to put out into the deep cannot ignore youth culture,” Archbishop Smith said. “Our young people are our greatest treasure.”

In light of that, Archbishop Smith also addressed the revitalization of archdiocesan youth camps, Camp Encounter at Lac La Nonne and Our Lady of Victory at Gull Lake, which were closed temporarily due to declining revenue and crumbling infrastructure.

Smith said the camps will come into full use over the next few years, and a timeline to do that is expected to be presented to him by the end of October. However, camp renewal is also dependent on donations. To that end, the camps were designated as the charity of choice for those wishing to donate at the Archbishop’s Dinner. 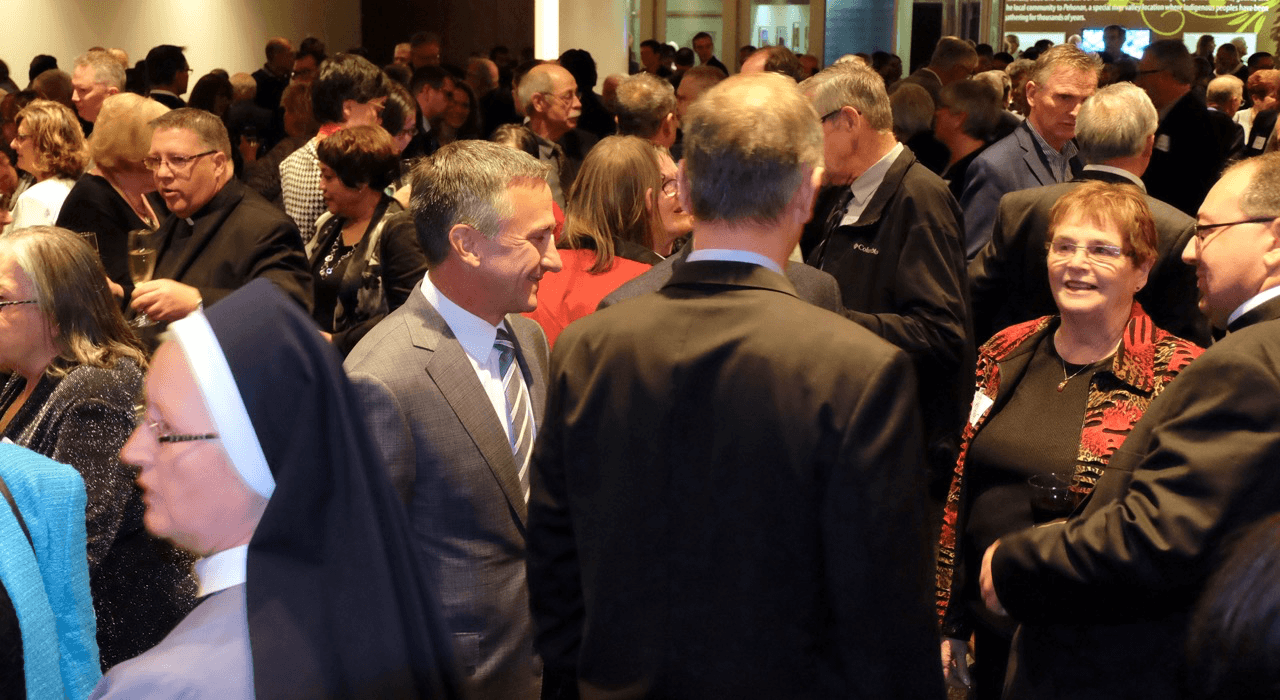 Lots of opportunities to chat over prosecco and cocktails before dinner 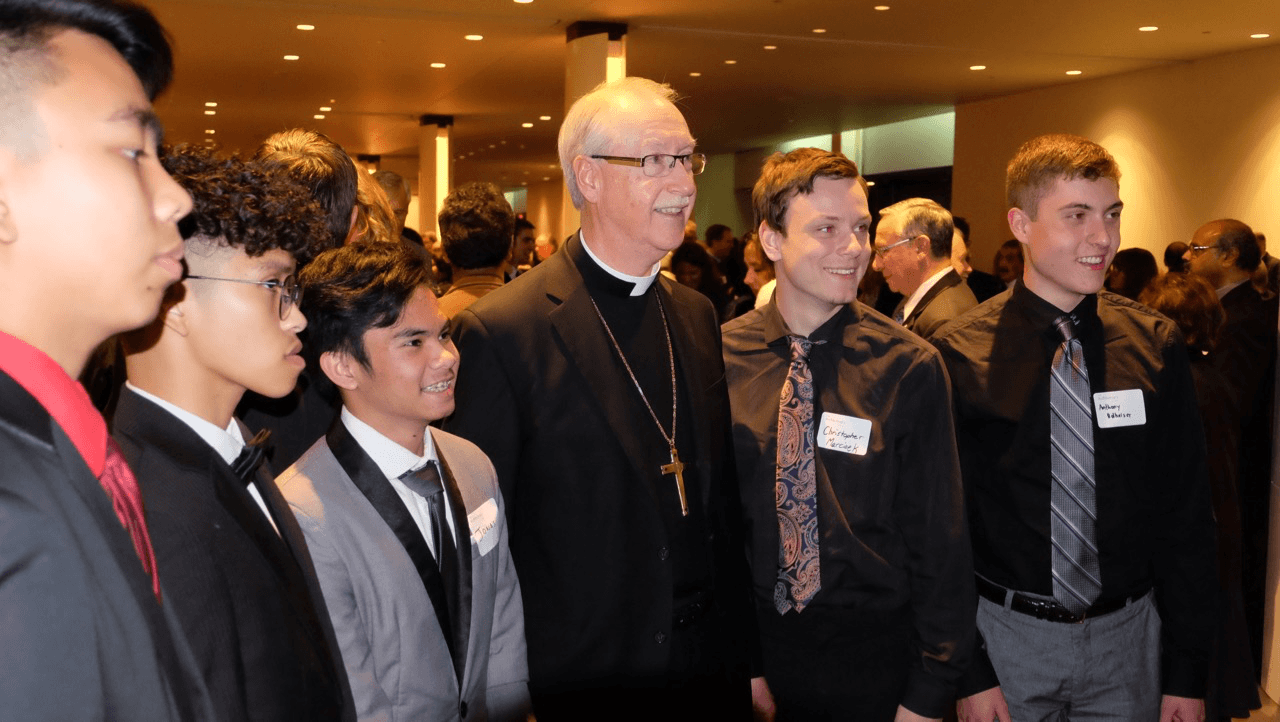 Archbishop Smith was in demand for photos with dinner attendees 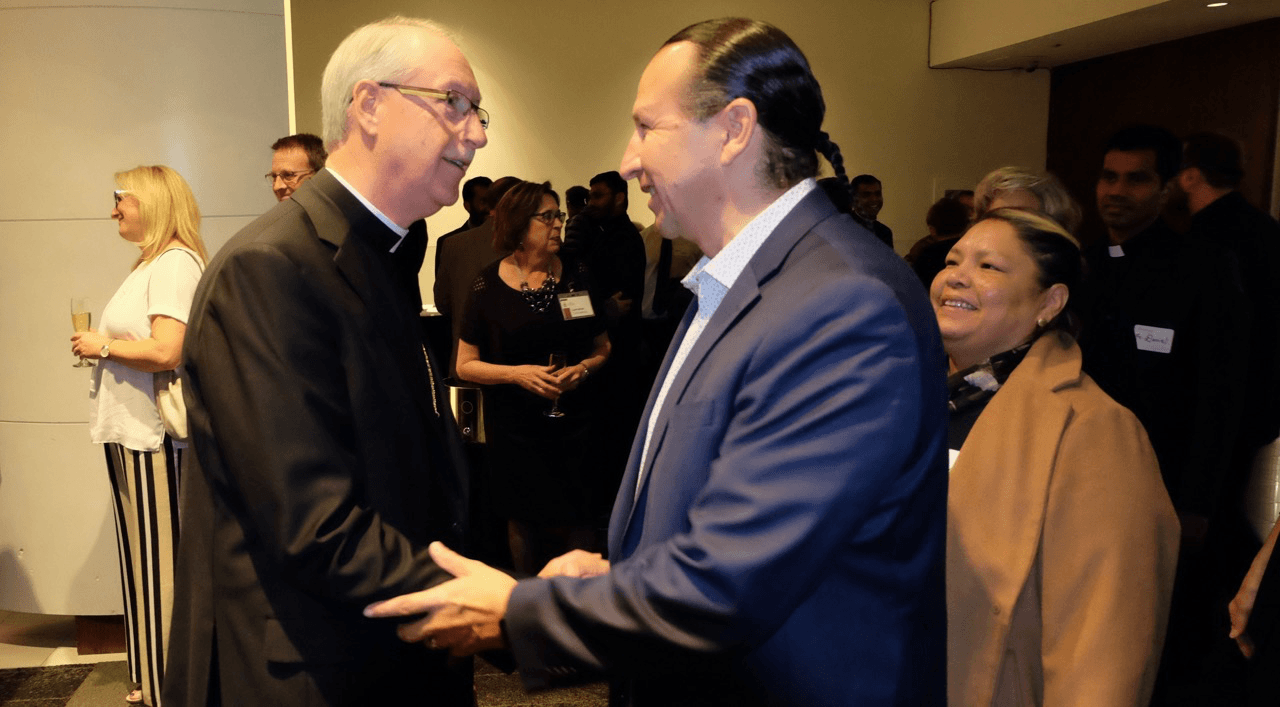 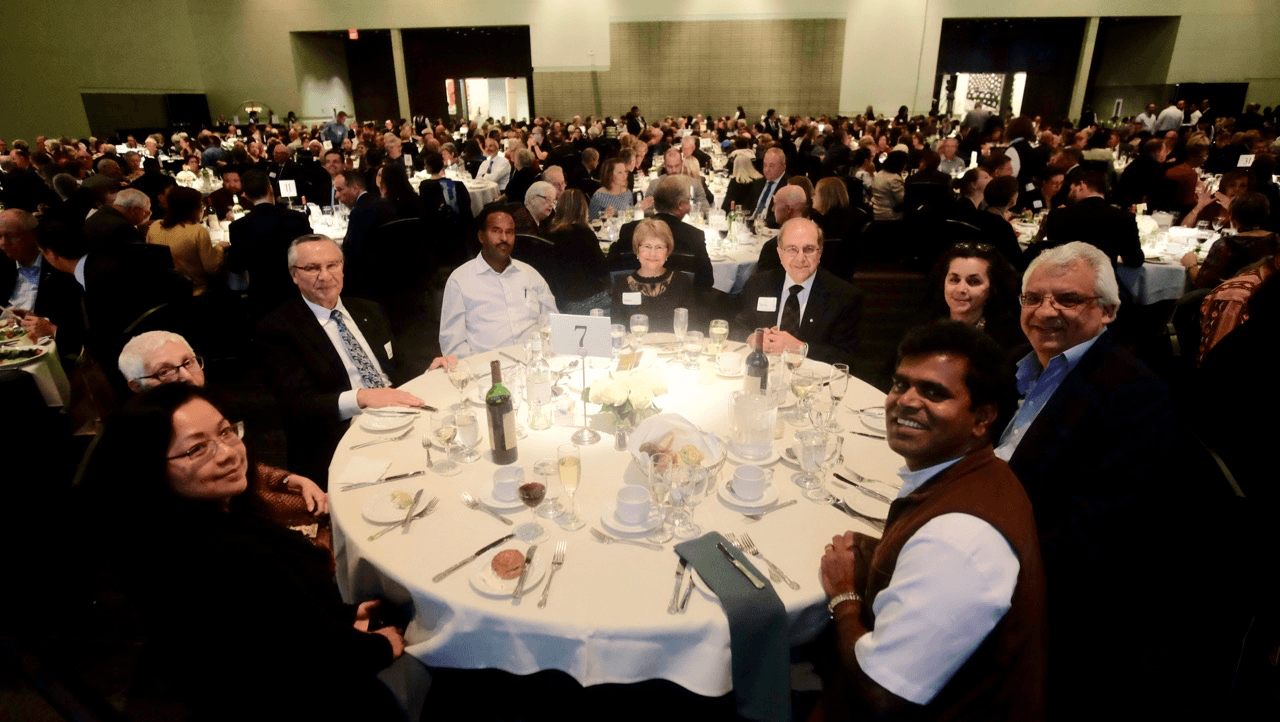 Hall D of Edmonton Convention Centre  was packed with 1,100 people for the 2019 Archbishop’s Dinner. 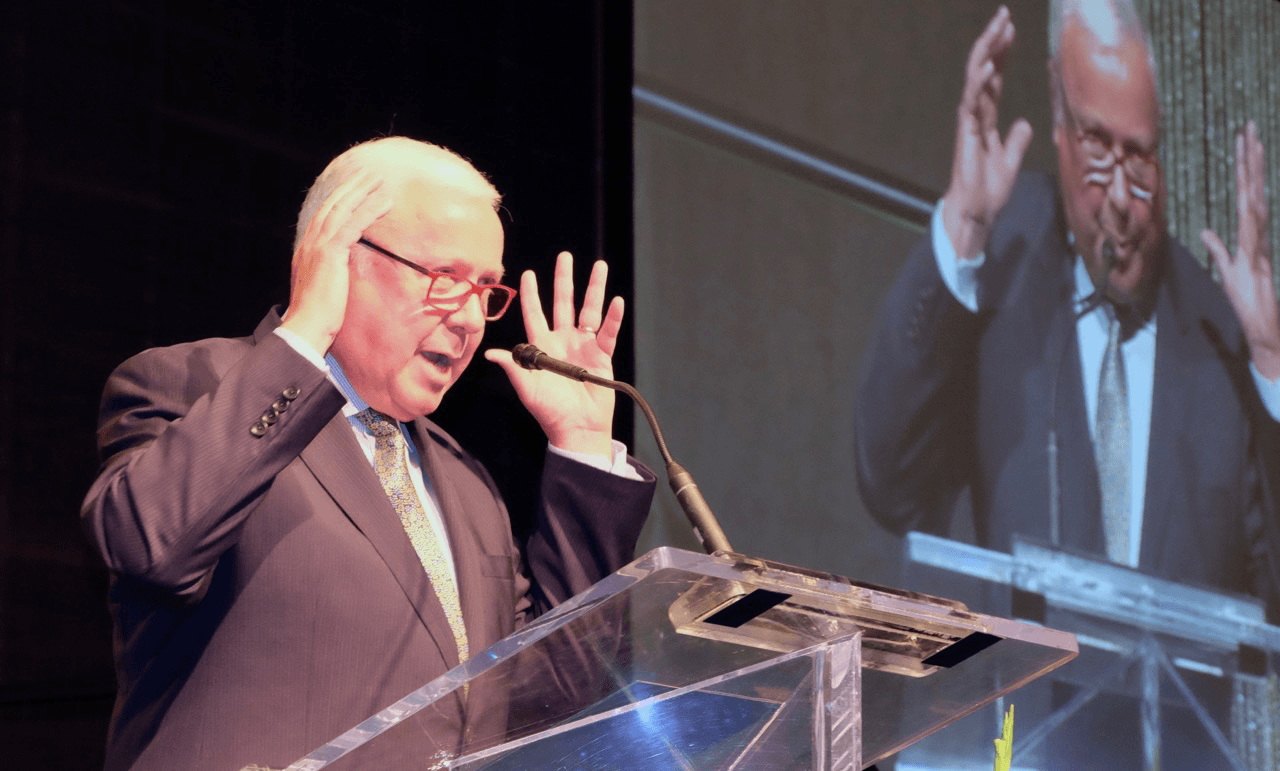 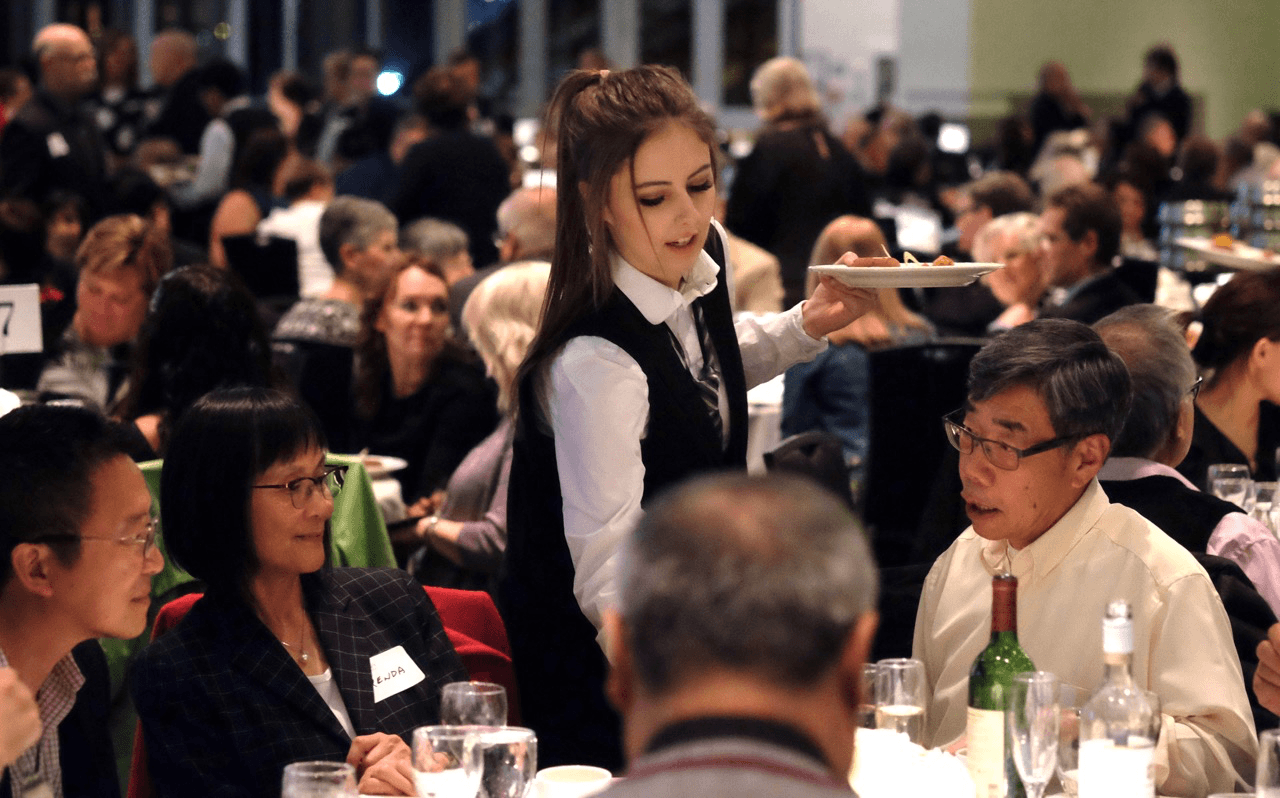 Waiter delivers a delectable dessert to top off a fine meal. 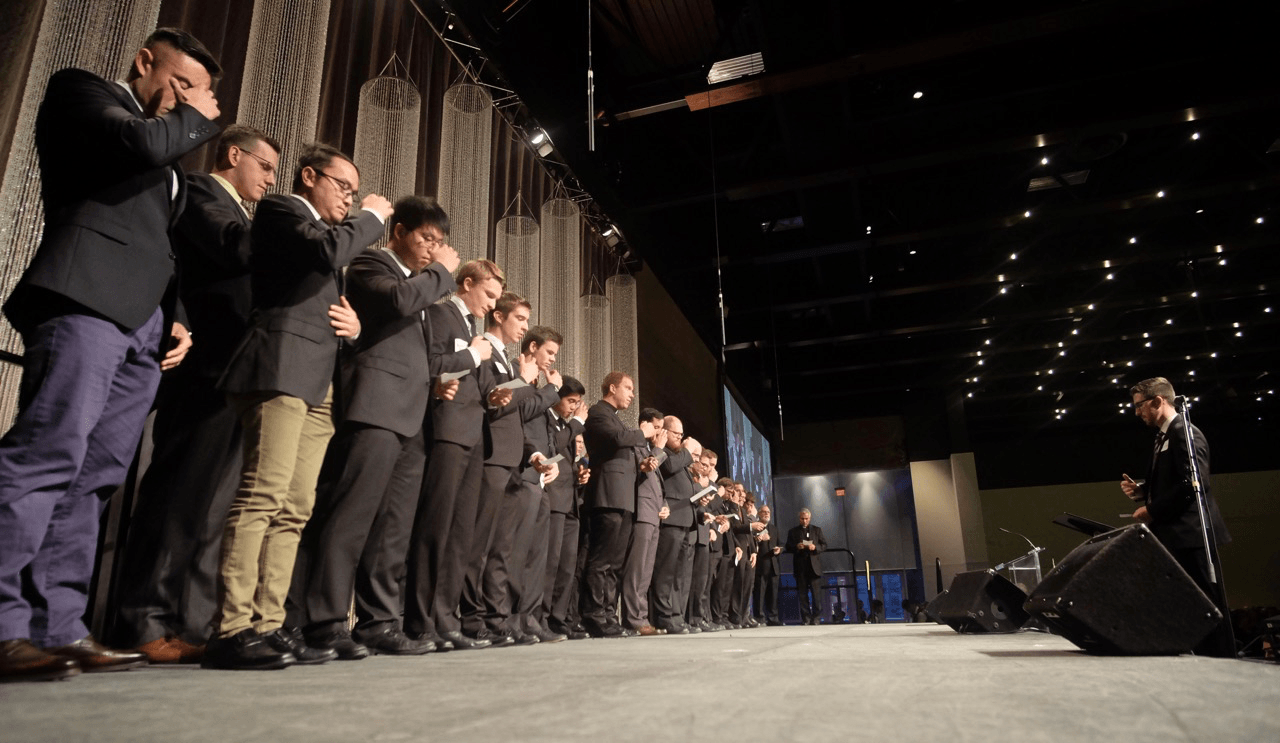 All 36 seminarians from St. Joseph Seminary offered grace before the meal, sung in Latin.