Skip to content
Priceless historical Catholic artifacts are seen among other items in a booth at the Rocky Mountain Antique Mall in Edmonton.Lincoln Ho, Grandin Media

Angie Frizzell’s chance trip to an Edmonton antique mall has uncovered a treasure trove of priceless Catholic artifacts that were mistakenly sold to a dealer and put up for sale.

When Frizzell stepped into the Rocky Mountain Antique Mall on Feb. 13, she expected to find no more than antique furniture or vintage clothing.

Instead, she discovered altar crucifixes, chalices, communion rails, sanctuary lamps, and even a communion box and portable altar which may have been used by the first missionary priests in Alberta.

When the eagle-eyed shopper saw a bust of St. Eugene de Mazenod, the founder of the Missionary Oblates of Mary Immaculate, she knew something was not right.

“As I was looking around at all of these things, it just bothered me,” said Frizzell, a member of Corpus Christi Parish in Edmonton. “To see my Church’s heritage out on display with price tags on it, I thought to myself, ‘I hope none of this gets in the wrong hands.’

“Some of those items were stunning and beautiful. When I saw the altar crosses and the Sacred Heart sanctuary lamp, I thought, ‘No – this stuff should not be here.’ I felt in my heart this stuff belongs somewhere special. It should be put on display somewhere it can be honoured.”

Many of the more than 50 unique and historic items belonged to the Oblates, the missionary order of priests who helped build the Church in Western Canada. And they were not intended for sale.

“There were many items included that really had no place being there,” said Rev. Ken Thorson, provincial superior of the Oblates of Mary Immaculate Lacombe Canada. “There was a serious mistake made on our part.”

The items were purchased in January by Arnie Loehr, owner of the Rocky Mountain Antique Mall, for $17,000. He and two other bidders had been contacted by the Vital Grandin Centre, the Oblate residence in St. Albert, where furniture was being cleared out in preparation for future renovations.

Over the years many artifacts from Oblate parishes have been brought to the centre to be stored or catalogued. Due to a miscommunication, some of those artifacts were included in Loehr’s purchase.

Father Thorson said the Oblates had planned to sell some of the centre’s furniture and non-religious material, but it was not their intention that historically significant or liturgical items be included with the deal.

“As provincial superior for the Oblates, I take full responsibility for that and whatever lack of communication and direction was there,” said Thorson. “We are now just grateful to the person that contacted the archdiocese and for the archdiocese’s support in retrieving all of these artifacts.”

“Many of these items are not only of great value to the Oblates and the Archdiocese, but to the entire church of Western Canada,” said Thorson.

“We are very grateful that these items were recovered and we can ensure they are preserved or displayed in their rightful place. They help tell the story of the 170-year mission the Oblates have had in the West. Many of these items are a part of our history that must be cherished.”

Archbishop Richard Smith was also relieved that most of the items were recovered.

“The Oblate missionaries are an intrinsic thread in the historical fabric of the Church in Alberta and of the province itself,” Smith said in a statement. “This was possible thanks to the sharp eyes of a Catholic shopper and the co-operation of the store owner with our chancery staff and Oblate representatives.”

When he initially purchased the set, Loehr wasn’t concerned. He had seen similar artifacts in antique stores across Quebec and didn’t intend to take away sacred items from the Church.

“I didn’t think there would be anything to selling this stuff,” Loehr said. “It’s a crazy, crazy mix-up. We’ve got some backlash, some hassle from people, but we’re not the bad guys.

A bust of St. Eugene de Mazenod was on sale for $380.Lincoln Ho, Grandin Media

“When we bought it, we were assured that this stuff was for sale. We didn’t do anything wrong,” Loehr added. “You can go to any antique store in Quebec, and find all kinds of these same items from churches that have been torn down or big churches they can’t afford to repair.”

The Oblates paid for the return of the items. Thorson is particularly relieved that the bust of St. Eugene de Mazenod – which was priced at $380 – was saved. He will ensure that it is given a special place for display.

The items had been on sale for two weeks, but only a few candle holders, crucifixes and a lectern were sold. Thorson said Oblates will compensate anyone willing to return the sold items.

Frizzell said she was glad to play a part in the recovery.

“I think it’s wonderful. We need to save this kind of stuff,” she said. “This is where the items need to be and should have been from the beginning.” 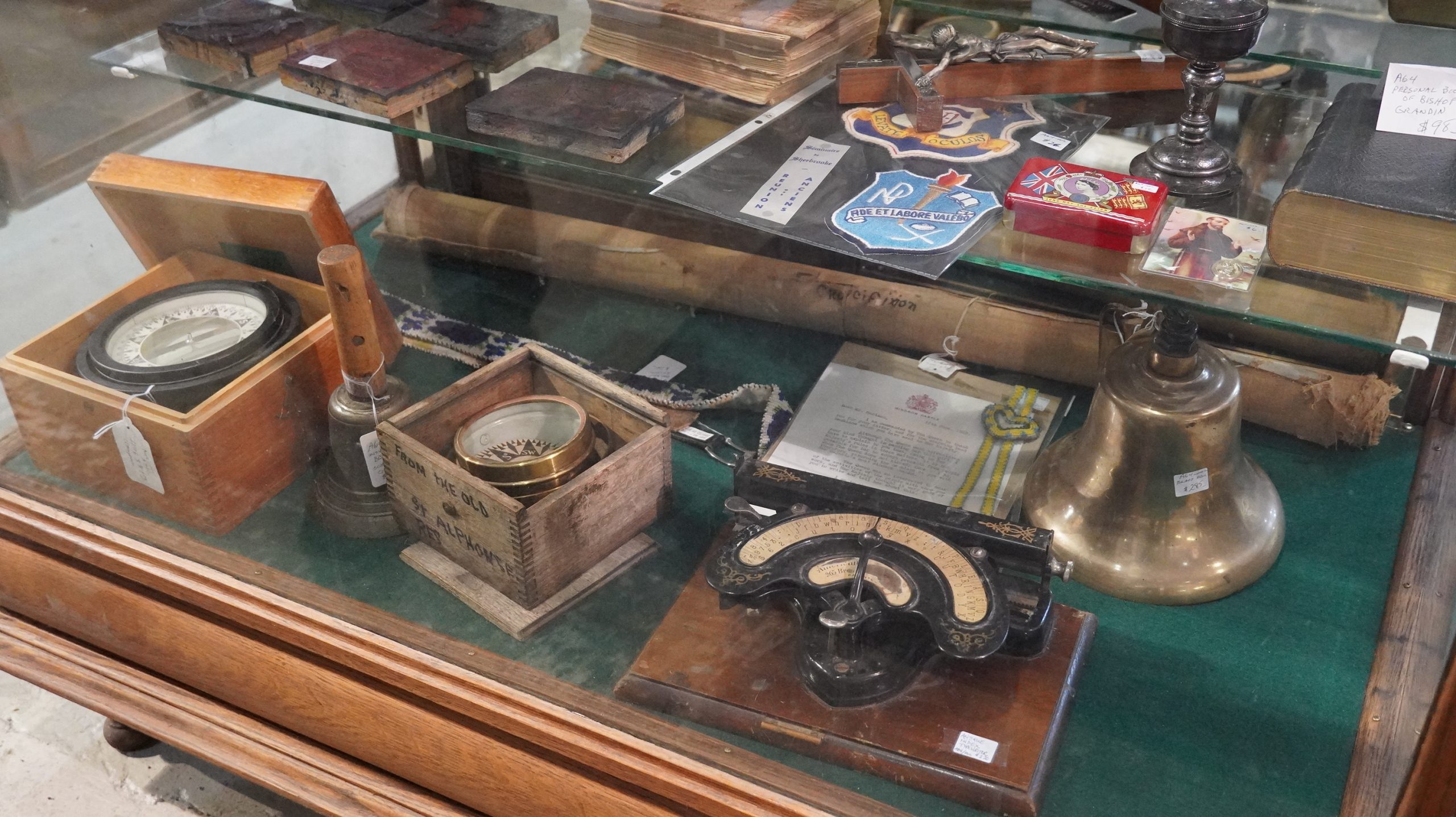 This display case includes compasses and bells used in the early days of Mission School in St. Albert. 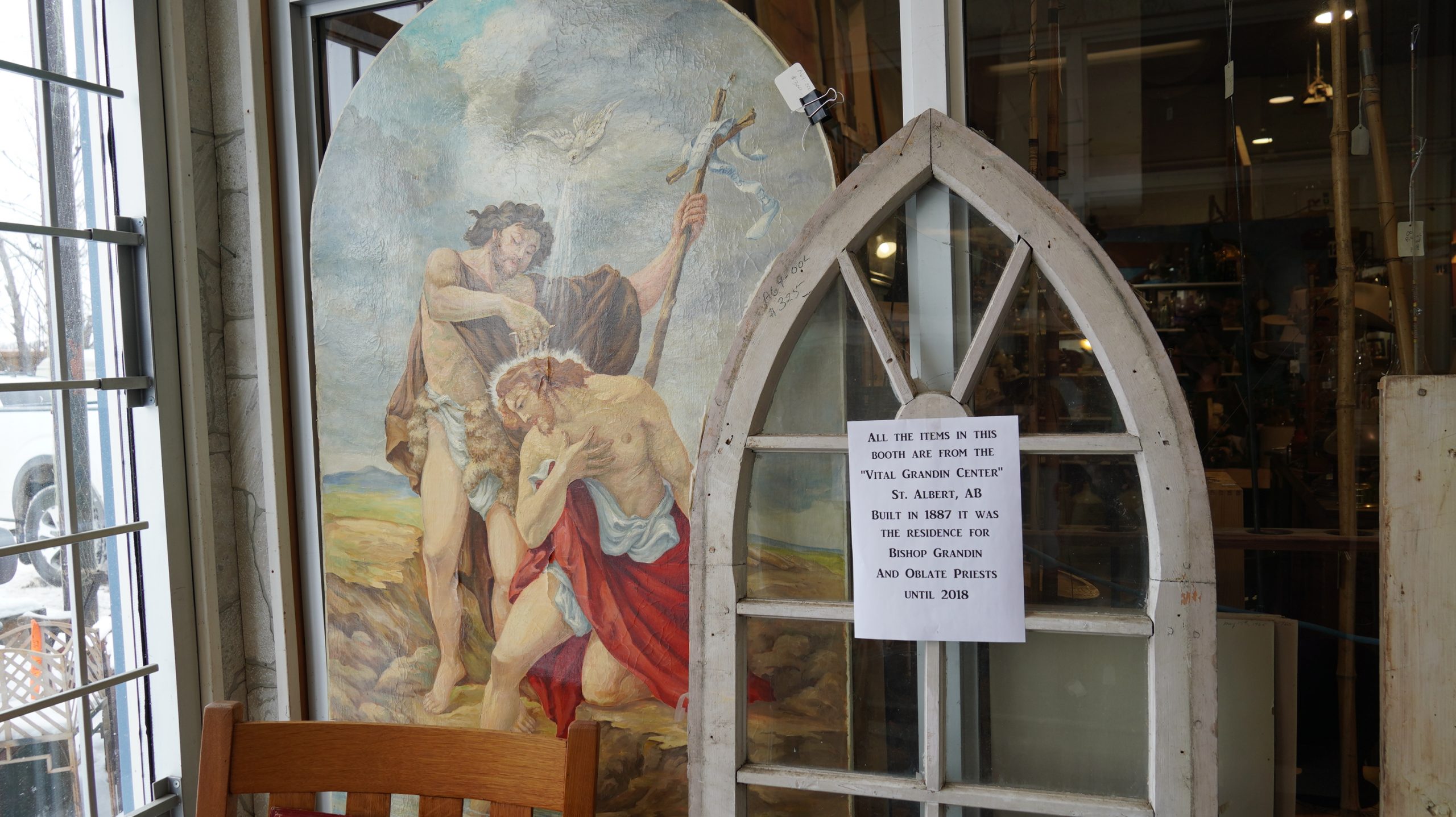 Historic paintings and windows were among some of the items recovered from the accidental sale. 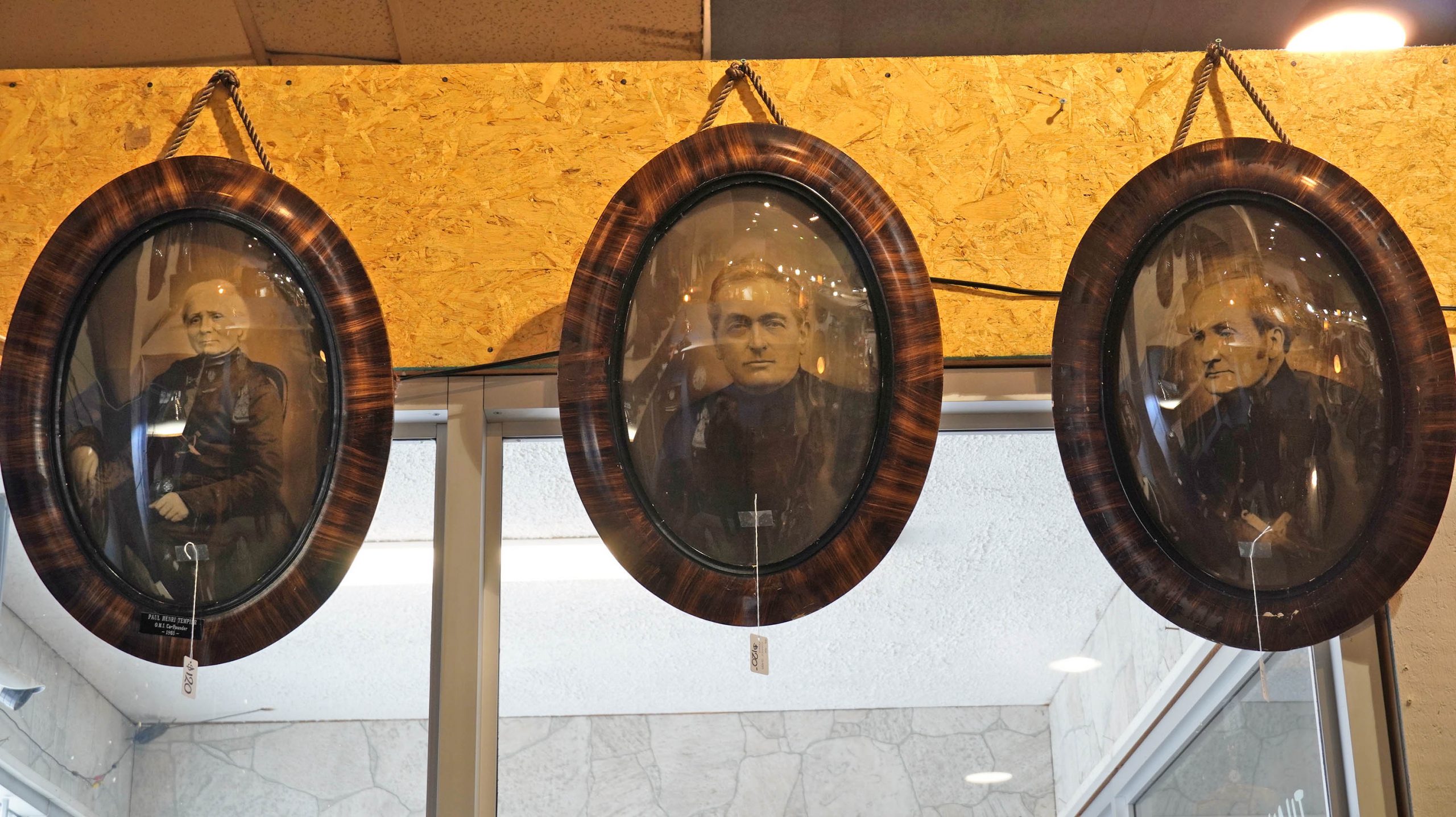 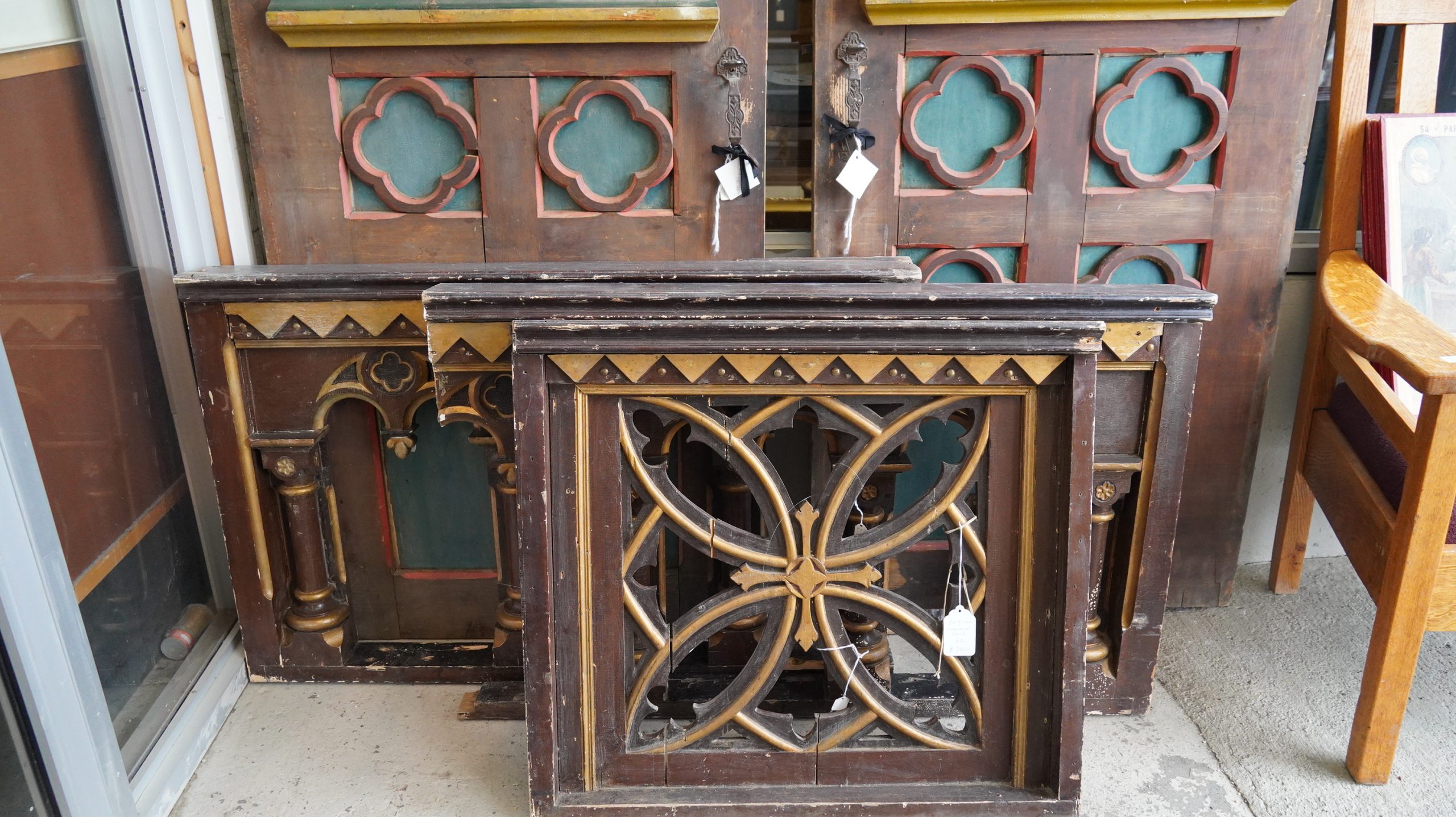 Ornate wooden Communion rails from some of the early Oblate parishes across Alberta. 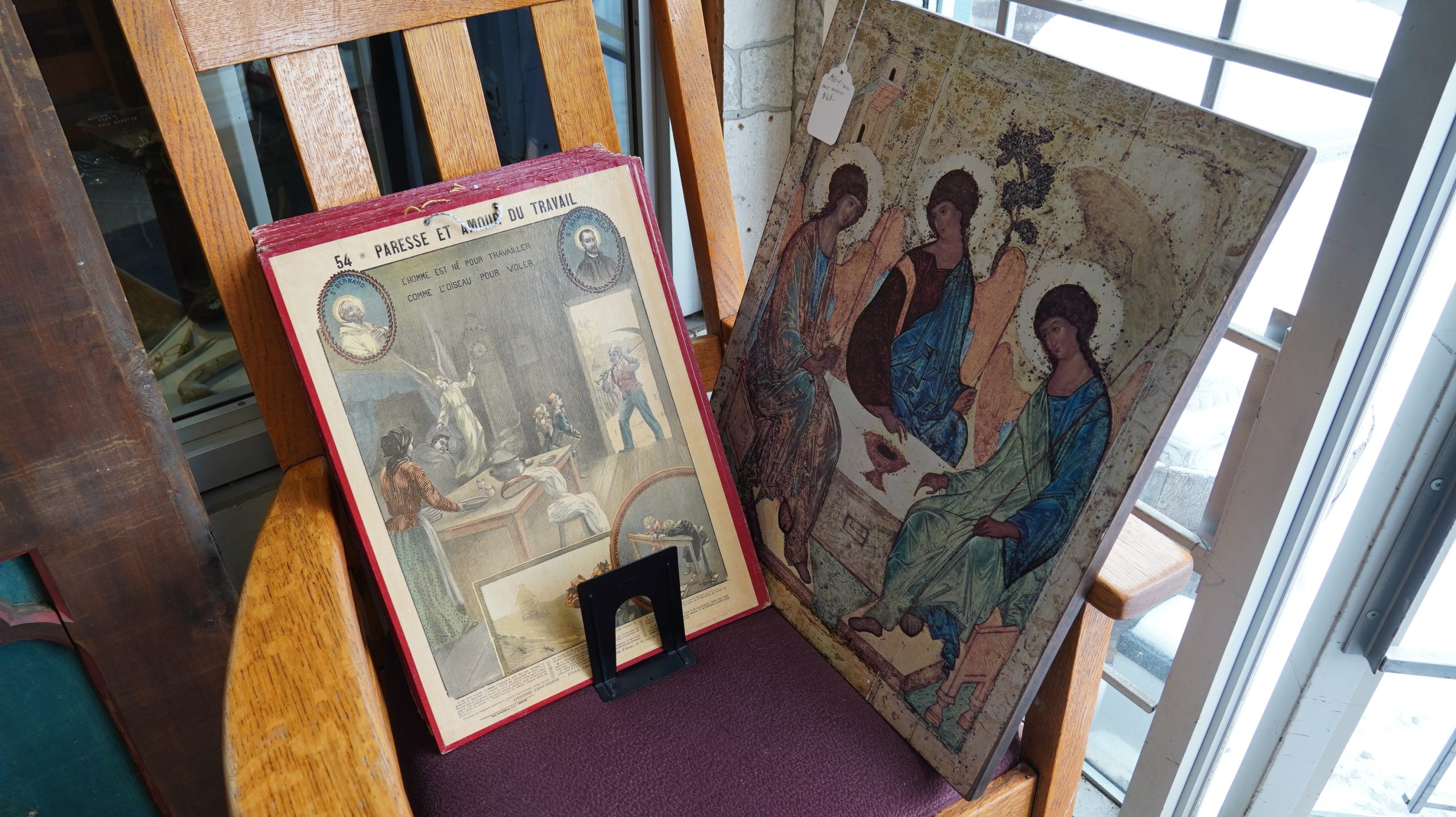 Icons, books, paintings and other artwork were temporarily for sale at the Rocky Mountain Antique Mall. 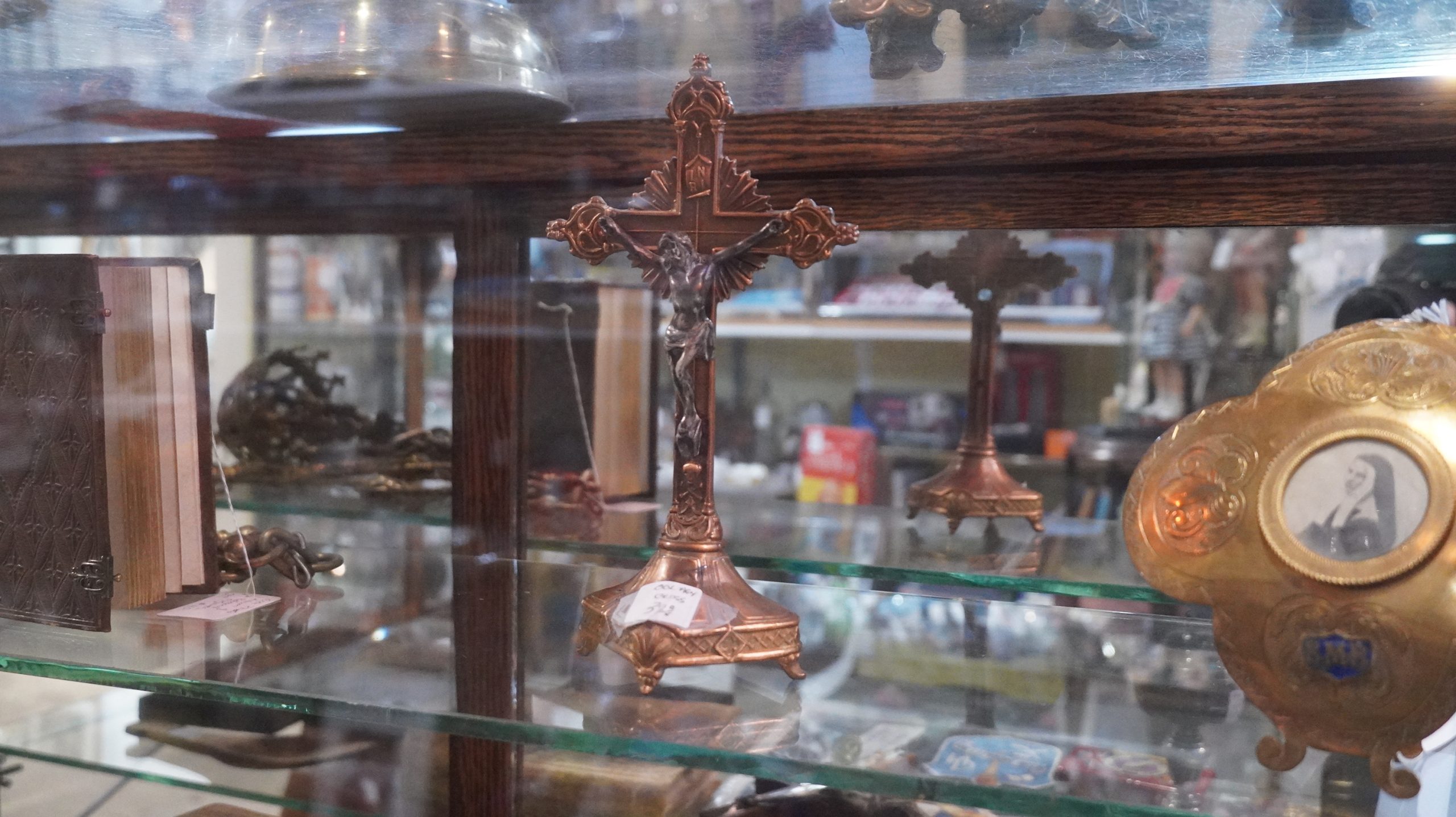 A variety of crosses, liturgical items, books, and other religious materials found their way to sale and were fortunately recovered. 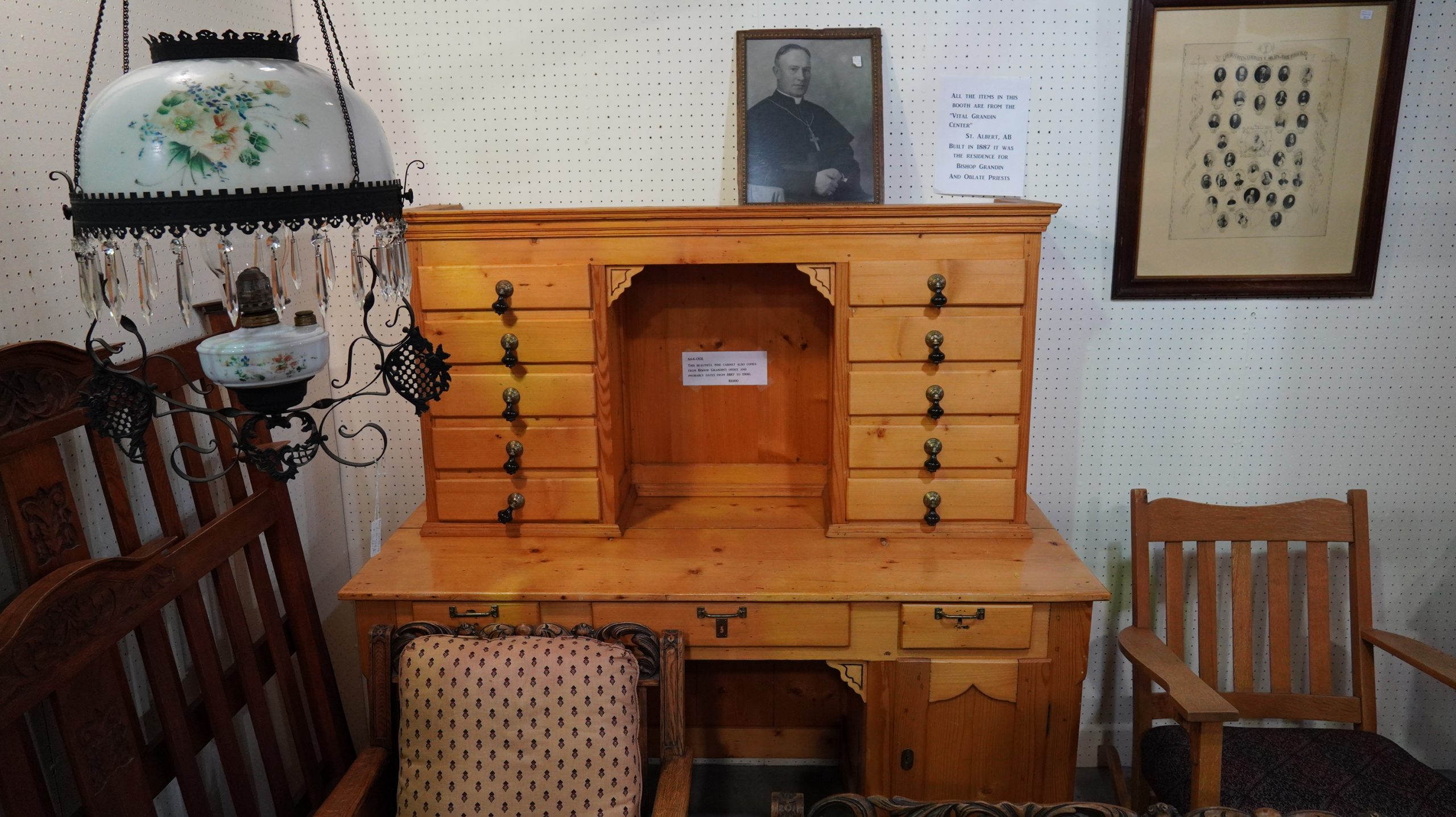 Furniture from Oblate offices were among the many historical items for sale. 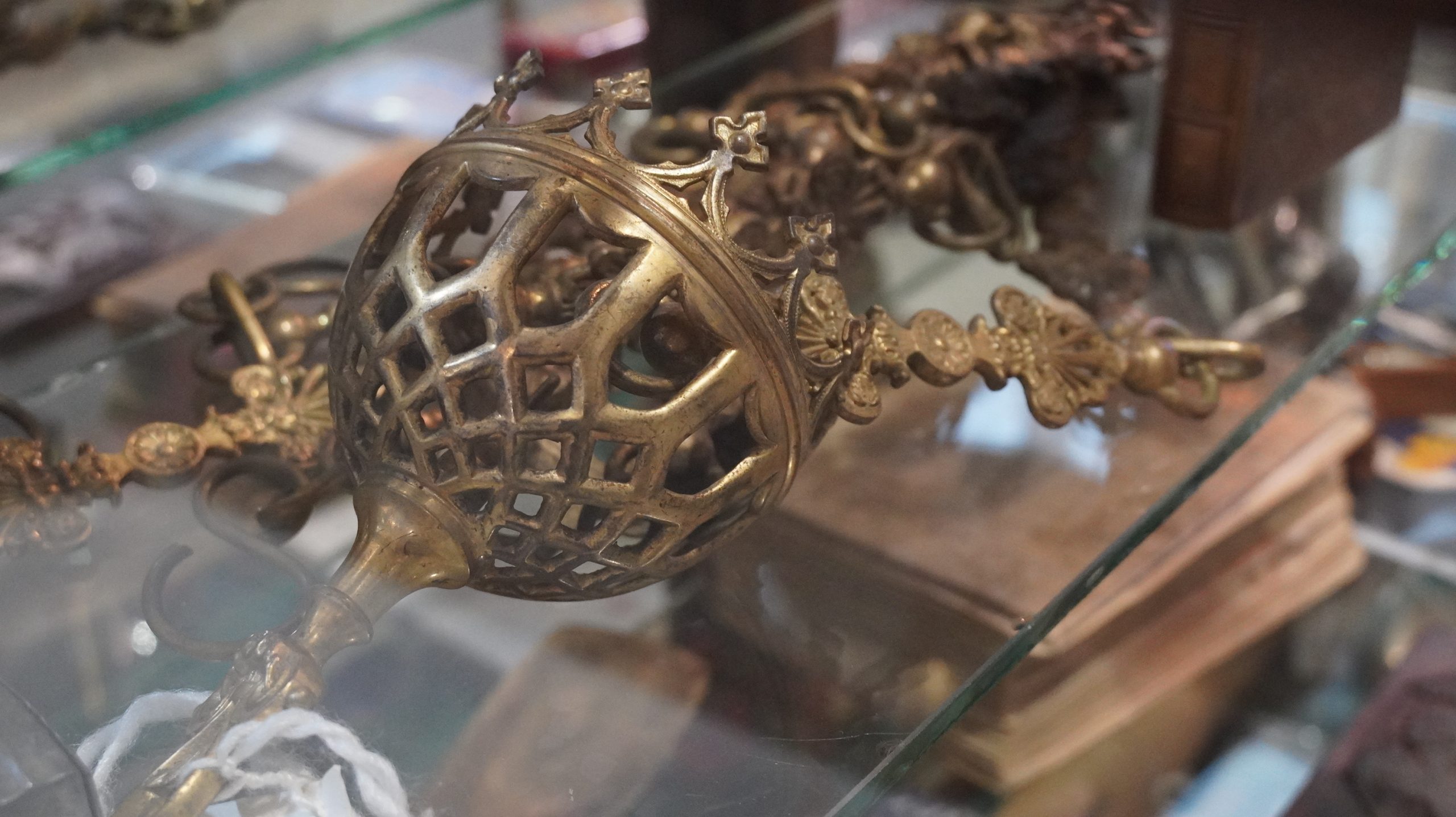 Religious and liturgical items came from Oblate parishes that had closed over the last century.