Canada is about to spend billions of dollars on more prisons for all the wrong reasons, says the community chair of justice for the Church Council on Justice and Corrections (CCJC).

“Prisons are a terrible return on investment,” Lorraine Berzins said at an Oct. 20 forum on the criminal justice system.

Berzins said restorative justice achieves a higher level of satisfaction for both offenders and victims and leads to far less recidivism than do prisons. But, she said, “it’s underused and underfunded.”

The forum, sponsored by the Manitoba Interfaith Council (MIC) at the Canadian Mennonite University, was held in advance of Restorative Justice Week, Nov. 14-21.

Correctional Service Canada defines restorative justice as a non-adversarial, non-retributive approach to justice. It emphasizes healing in victims, meaningful accountability of offenders and the involvement of citizens in creating healthier, safer communities.

The CCJC is a national faith-based coalition of 11 founding churches, incorporated in 1972.

Berzins worked in federal penitentiaries for 14 years before joining the CCJC. She was the first female classification officer at a medium-security detention centre in Campbellford, Ont.

In 1970, at age 26, she was taken hostage by a prisoner who demanded a car and escaped with her. The car broke down on a country road and an eight-hour standoff with police ensued. The life-changing experience gave her insights into the vulnerability and fears of both offenders and victims.

Berzins described popular thinking about the justice system as “binary”: “It’s about crime and time, someone is good or bad, punishment is tough or lenient, someone is a victim or an offender.

“But what it really is about is human behaviour, real life with real stories. It’s much more complex than those binary contradictions.

“There’s a big human story but we put it into a numbers game. We take it all and reduce it to, ‘Did he get enough time or did he walk?’ We’re locked in a mindset of crime plus time equals justice.”

Berzins said she doesn’t advocate the elimination of the criminal justice system but its focus must shift to the needs of the people in the system. Restorative justice, she said, is most applicable in cases involving non-violent crimes, the mentally ill, female offenders and young offenders.

“The inefficiency of the justice system creates social problems for cities and municipalities,” Berzins said.

“If you are going to have more people in prison how can cities support them when they re-integrate? What kind of people do we want to be, how do we want to live with one another?”

At the forum the MIC circulated a petition supporting a letter to Prime Minister Stephen Harper from Bishop Gary Gordon of Whitehorse, expressing concern that the prime minister and the Government of Canada “in this time of financial cuts to important services, are prepared to significantly increase investment in the building of new prisons.”

Gordon, a prison chaplain for 22 years, said “new federal laws will ensure that more Canadians are sent to prison for longer periods, a strategy that has been repeatedly proven neither to reduce crime nor to assist victims.”

Cardinal Pell, describing prison, says he knew ‘the Lord was with me’ 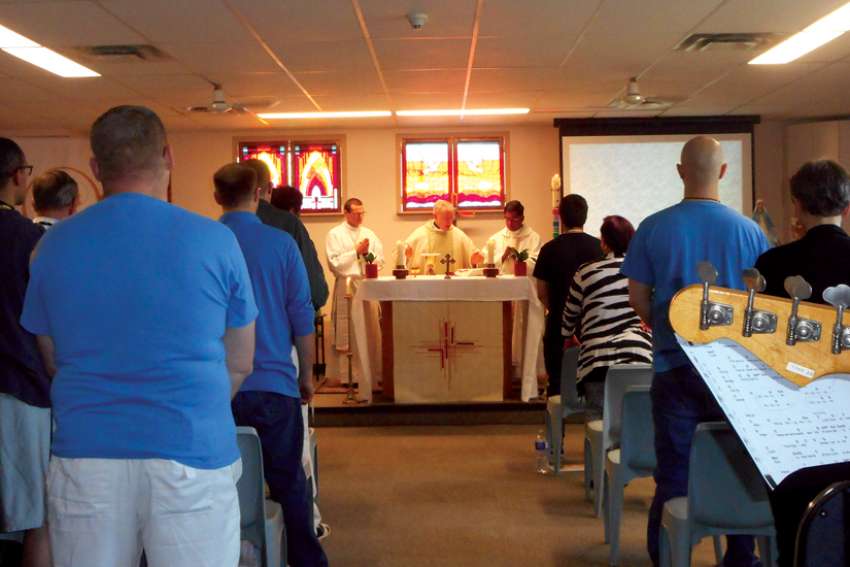