Skip to content
Chief Tony Alexis of the Alexis Nakota Sioux Nation asked for special prayers for witnesses testifying at the Missing and Murdered Indigenous Women and Girls Inquiry, "that the ones who are coming to do testimonies will have healing in their hearts and spirits."Lincoln Ho, Grandin Media

As the smell of burning sweetgrass and the sound of sacred cultural song and dance flooded Edmonton’s St. Joseph’s Basilica, Merv Kootenay said he truly felt a part of the Catholic Church.

He was one of more than 700 people – many from local First Nations or from Latin America – who celebrated the Feast of Our Lady of Guadalupe on Dec. 12 at the Basilica.

The feast day commemorates the apparitions of a brown-skinned Virgin Mary to Juan Diego Cuauhtlatoatzin, an Aztec convert to Christianity, just outside Mexico City in 1531. Diego became the first person from the Americas to be declared a Roman Catholic saint. 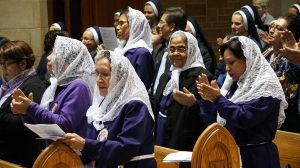 Our Lady of Guadalupe is the patron saint of Mexico and the Americas. In Canada, her feast day is also a National Day of Prayer in Solidarity with Indigenous Peoples.

“She appeared to an Aboriginal person, an Indigenous person, and (St. Juan Diego) represents us as Aboriginal people,” Kootenay said. “The message that she came to give him is intended for all of us: To know God, to know Jesus, to know what He expects of us, how to live, that He’s not forgotten us, that He’s for everybody, including us.”

The Feast of Our Lady of Guadalupe brought together cultures participating in the Mass while wearing traditional clothing.

The celebration featured choirs from the Maskwacis, a Cree community 100 km south of Edmonton, and Our Lady of Guadalupe Spanish Parish.

Felicia Agwo cried tears of joy as she joined devotees dancing and singing to shouts of “Viva La Guadalupana!” at the statue of Our Lady of Guadalupe, placed in the front aisle of the Basilica.

“It’s emotional, tears of love. She came to unite us to her son, to lead us to her son Jesus Christ, for us to see the meaning of love and caring and sharing and not hating one another,” said Agwo, a member of Assumption Parish. “Seeing everybody in the eyes of the Lord, no matter the colour of the skin, no matter what race. For us to see that God is the one that created all of us.”

“I think it’s beautiful when we can break down barriers and all come together in prayer,” said Gary Gagnon, coordinator of the Archdiocese of Edmonton’s Office of Aboriginal Relations.

Chief Tony Alexis of the Alexis Nakota Sioux Nation asked for special prayers for witnesses testifying at the Missing and Murdered Indigenous Women and Girls Inquiry. It is estimated that at least 1,000 Indigenous women and girls have disappeared or been murdered over the last 30 to 40 years in Canada.

“(Pray) for the people who are doing the Missing and Murdered Indigenous Women and Girls Inquiry, that the ones who are coming to do testimonies will have healing in their hearts and spirits,” Chief Alexis said.

After Mass, Archbishop Richard Smith said the intercultural celebration of Our Lady of Guadalupe reflected “the universal Church in microcosm, and it was a real sense of joy.”

Drummer Merv Kootenay, centre, says "the Church is always there to stand with us, to pray for us."

“Our Lady, when she drew close to St. Juan Diego, she came as one of his people, vested in that way, with the colour of her skin in that way, addressing him in his mother tongue. It just shows when Our Lady draws near, she draws very close, and she becomes one of us in that sense. So she’s our mother and we know her maternal closeness to us and her maternal love is very real, very powerful.”

For his part, Merv Kootenay said he believes the Catholic Church will always stand with Indigenous people.

“The Church represents first and foremost our faith, love, prayer — that no matter what difficulties we may go through as individuals or even as groups, the Church is always there to stand with us, to pray for us,” Kootenay said. “So I think we can find comfort and peace knowing that we’re not alone in this struggle, in this difficulty we sometimes encounter.”