Skip to content
Auxiliary Bishop Gregory Bittman anoints the altar at St. Stephen's Church with sacred chrism, the blessed oil used also for Confirmations and the Ordinations of priests and bishops.

Parishioners are celebrating the grand opening and blessing of their new $3.2-million church building − after seven years of fundraising in incremental steps from bottle refunds to gift-card sales and lunches.

“It was fantabulous!” Marian Sage, a parishioner for 51 years, said after the Jan. 6th dedication Mass.

Thalia Hibbs, a parishioner and Lacombe city councillor, noted that St. Stephen’s has been an integral part of the central Alberta community for a long time. Its very first Catholic church was built back in 1903.

“You don’t dedicate a church every day, so it’s a very special occasion to have so many special visitors with us today,” she said.

The new 13,672-square-foot building replaces the parish’s six-decade-old church, which was torn down in February 2016 due to age, hail damage to its roof two years ago, and high repair costs.

Since then, the 450 families of the parish have been gathered for Mass at Father Lacombe Catholic School.

They raised more than $1.2 million for the new building through two fundraising campaigns as well as bottle refunds, sales of Sobeys gift cards and Mundare sausage, Ukrainian and Filipino lunch events, and monthly donations to the new church fund. The remainder of the capital costs will be financed through a mortgage.

“It was a lot of work, and the co-operation from the parishioners was amazing. It was so challenging and so, so inspiring,” said Rev. Shimit Abraham, the pastor at St. Stephen’s.

“People just stepped up,” said Tom DeForge, chairman of the parish council, noting that hail damage to the old building two years ago may have been a blessing in disguise. “It helped move the decision forward to build, and it certainly expedited the whole process and got people involved.”

The new building is 1,600 square feet bigger than the old one, blending a modern, open concept style with Catholic imagery.

Some features of the old building have also found a home in the new one, such as the Stations of the Cross, the baptismal font, the tabernacle, and the statues of St. Stephen and the Virgin Mary.

The building features a large nave, equipped with a brand new sound system, that can seat more than 300 people. The church hall serves as an overflow area and can seat 200. The new building also has a central gathering area, office space and meeting rooms.

It was completed in just 10 months, despite bad weather and a tight time frame.

“Overall, honestly the Holy Spirit was with us all the way,” DeForge said.

Bishop Gregory Bittman, who presided at the Mass of Dedication, agreed.

“It’s amazing how fast it went from talking with the parish community,” said Bishop Bittman. “I think God really blessed the people and their work here.”

During the dedication ceremony, Bishop Bittman anointed the altar with sacred chrism, the blessed oil used also for Confirmations and the ordinations of priests and bishops. The walls of the church nave (seating area) were then anointed at 12 different places, evoking the memory of the 12 Apostles.

DeForge said St. Stephen’s parishioners are happy to have a new home, and they are also grateful to Father Lacombe Catholic School for providing a temporary location to celebrate Mass.

As a token of gratitude, and a nod to the parish’s history, the new hall is named after Father Albert Lacombe, the Oblate missionary who played a major role in building the Catholic Church in Alberta. 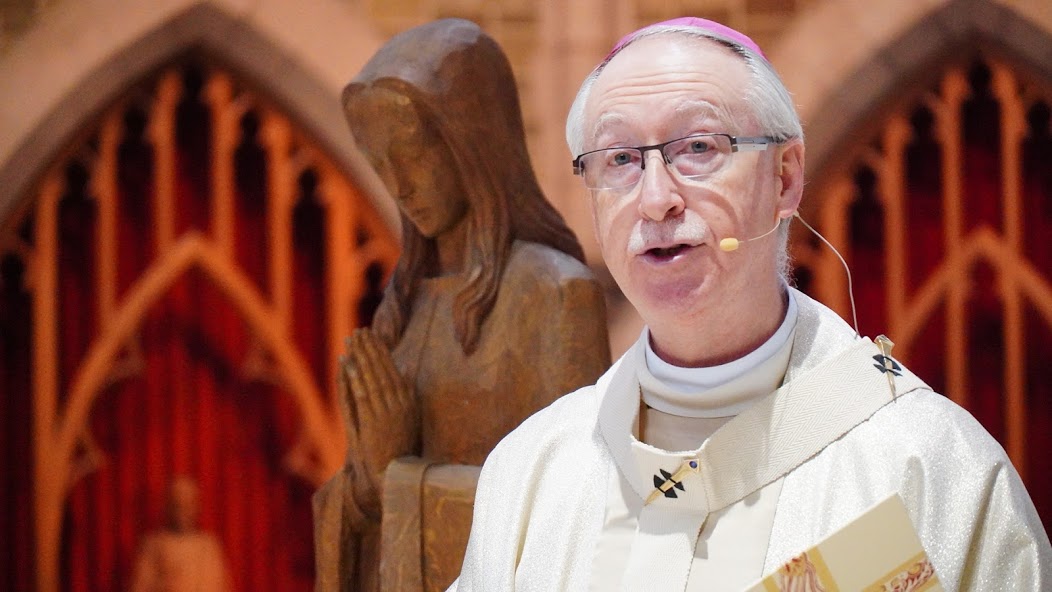