Skip to content
A small majority (51 per cent) of voters in a new poll say Andrew Scheer’s Catholic faith negatively impacts their opinion of him as a possible prime minister.Andre Forget, Special to Grandin Media

Those who think federal Conservative leader Andrew Scheer’s Catholic faith played a role in his failure to become prime minister after the Oct. 21 federal election have the results of a new poll to help back up that belief.

While most Canadians say a candidate’s religious beliefs should not be an issue during a federal election campaign, at the same time a small majority (51 per cent) of those polled after the election by the Angus Reid Institute say that Scheer’s Catholic faith negatively impacts their opinion of him as a possible prime minister.

The poll, conducted by Angus Reid in association with Cardus, a Christian think tank, found that while 55 per cent of Canadians say a political leader’s faith should be off-limits to the media, “more than half of those who saw, heard, or read about Scheer’s faith say it left them with a negative opinion of him.” 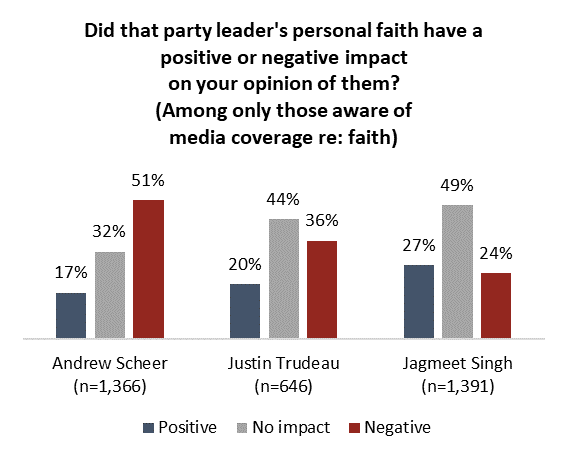 And in the two provinces that have the largest number of Catholics within their population, Quebec and Ontario, the Conservative vote in the 2019 federal election declined from what it was in the 2015 election.

The Conservative vote in Ontario declined by 1.8 per cent, while it held relatively steady in Quebec dropping by only 0.7 per cent even though the party’s seat total in Quebec went down because of the strong showing of the Bloc Quebecois.

“There’s clear evidence that hot-button social issues were a factor in how Canadians voted in the 2019 federal election,” said Ray Pennings, executive vice-president of Cardus. “However, they were a bigger factor in Quebec than in other parts of the country because Bloc Quebecois voters took the hardest line on those issues.”

A clear and substantial majority of the 1,400 Canadians polled for the Angus Reid survey said that a party leader’s personal views on abortion and same-sex relationships does impact how they vote.

According to the survey, seven out of 10 Canadians indicated that a political party leader’s personal views on abortion and same-sex marriage is a factor in how they vote, although that result does not indicate whether it would be a positive or negative reason to vote for or against a candidate.

While Scheer was often confronted on the election campaign trail about his personal beliefs as a Catholic, Prime Minister Justin Trudeau – who is also Catholic – did not come under the same scrutiny, which goes to one of the main points made in an analysis of the Angus Reid poll results.

In the Angus Reid introduction to the survey’s results, it says that the results “suggest that it is not necessarily a leader’s faith that provokes negative or positive reactions, but how the leader approaches and handles the issue on the campaign trail.”

While Scheer continually said during the Oct. 21 campaign that if he were to be prime minister he would not reopen the debate about abortion rights in Canada and the legality of same-sex marriage, when he was asked directly about what his personal beliefs are as a faithful Catholic he often refrained from giving a direct answer.

Even though Trudeau is also Catholic, he has been clear throughout his time in politics that he supports a women’s right to choice when it comes to abortion and is an advocate for gay rights.

The Angus Reid survey report also points out that there have been other successful Catholic or Christian prime ministers including Jean Chretien, Paul Martin and Stephen Harper who successfully divorced their personal beliefs from how they governed.

“Interestingly, while this issue appears to have hindered Andrew Scheer in the minds of some voters, former prime ministers Jean Chretien, a Roman Catholic, and Stephen Harper, an Evangelical Christian, were both successful as prime ministers while holding personal views at odds with Canada’s policy on abortion rights,” the Angus Reid survey analysis said.

Snowboarding, Baptism, and Getting Faith WRONG