Sister Michelle Langlois, FCJ, is a teacher and chaplain at St. Thomas More Junior High School in west Edmonton. Growing up in Winnipeg, she didn’t expect to be called to consecrated life.

“I had no intention of becoming a religious sister,” she recalls.

“It wasn’t on my radar at all. My faith was in the background. It was there, but it wasn’t the intimate relationship that I experience today.”

After finishing her university studies, Langlois began teaching at a Catholic school in Calgary. While going through an experience of loss, she started seeking to know Jesus in a deeper way.

“I turned to prayer quite a bit,” she explains.

“There was a particular day when I was praying, and I had this intense experience of profound peace in my heart. In that moment, I knew that that was Jesus.”

“I had never had such an intense or personal experience of Jesus before. I realized that Jesus wanted to have a personal relationship with me. Once that happened, I had to find out more.”

The sense of needing to learn more eventually led to the awareness that she was being called to religious life. At first, she was reluctant to explore the possibility.

“I thought, ‘No, I don’t want to do that. That’s too extreme! There must be another way.’ But this sense of call was not going away.”

The chaplain at her school directed her to the Christian Life Centre, a retreat centre run by the Faithful Companions of Jesus (FCJ) sisters in Calgary. The formation she received from the sisters there helped enable her to answer the call. She professed her first vows as a Faithful Companion of Jesus in 2016.

Something she teaches all her students is the Spiritual Examen, a way of prayer taught by St. Ignatius of Loyola which FCJs practise daily. 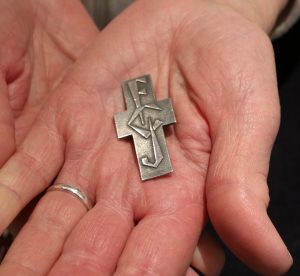 Fidelity to daily practice of the Examen enables the FCJs to discern God’s will for their lives on an ongoing basis. Confidence that they are doing God’s will strengthens them to persevere, even when God gives them extremely challenging missions.

In 1882, when Bishop Vital Grandin asked the FCJ sisters to come from Liverpool, England, to Canada, he didn’t sugarcoat his request. He wrote to them, describing his diocese as “a vast and barren field which demands many sacrifices for those who work here.”

The prospect of ministry in a “vast and barren” pioneer territory did not deter the sisters, once they discerned that God had important work for them to do in Edmonton. In 1888, a small group of Faithful Companions of Jesus sisters arrived, and, a month later, opened Edmonton’s first Catholic school, St. Joachim.

In the 130 years that have passed since then, the sisters’ lives of sacrifice and faithfulness have impacted countless Albertans through their apostolate of Catholic education, as well as through other ministries in which they serve.

As she carries this legacy into the future, Sister Michelle, like the faithful women who came before her, continues to share the rich heritage of the Ignatian spiritual tradition with the Archdiocese of Edmonton. In every generation since 1882, FCJ sisters have taught us how to hear to the call of Jesus in our lives, and to respond generously to that call.