Skip to content
At 91, Father Frank Stempfle is retiring after 66 years of ministry. He is believed to be the longest serving priest in Canada.Lincoln Ho, Grandin Media

When Frank Stempfle was born prematurely in a rural Alberta farmhouse on a winter day in 1926, he weighed just 2 ½ pounds. His father placed him in a shoebox near the oven to keep him warm, and the neighbours didn’t think he’d live.

But against the odds, Frank not only survived; he grew into a healthy young man with a love for sports and the outdoors, a fierce competitive streak, and a self-deprecating sense of humour. He also went on to become what is believed to be the longest-serving parish priest in Canada.

Priests in the Archdiocese of Edmonton are expected to serve in active ministry to age 75, as long their health and personal circumstances allow. But that was way too early for Father Frank. At 91, after 66 years of serving as a pastor in the archdiocese, he has decided to retire on Sept. 30. The date will be a bittersweet one, because it also means the closure of St. Patrick Parish in central Edmonton, where he has served two terms as pastor, 1970-77 and 1986 to present.

The parish has been slated to close for some time, but Archbishop Richard Smith agreed that it could remain open as long as Father Frank would serve as pastor. So he’s making plans to move to an apartment where he’ll be able enjoy visits with friends and family, and he might get in a few more games of golf, but beyond that, he’s not sure what retirement will hold.

“I don’t know quite what to expect, since my whole life has been with the church beside me and serving people as a priest,” he said. “And of course they were of service to me, by being so kind and good to me. That’s why I stayed, because … of their support and their love. So it wasn’t a hardship; it was a joy and a privilege to be here.”

It’s clear that the feelings are mutual. Last year, his parishioners arranged for the street in front of the church to be named Father Frank Stempfle Way.

“Even though I’ve long admired the man for his commitment, his gentleness, his love for the people, it was all confirmed on the Sunday when I visited the parish to announce his retirement,” Archbishop Smith recalled. “The love of the people at that parish for Father Frank was palpable.

“We were coming in the entrance procession, for example, and I don’t know how many little children were reaching out their hands for a high-five, and here was this priest in his 90s giving them the high-five back. The grins of sheer delight on the faces of the children told me a great deal about how people of all ages really have a genuine love for this priest and for the commitment that he’s made to them over the years.” 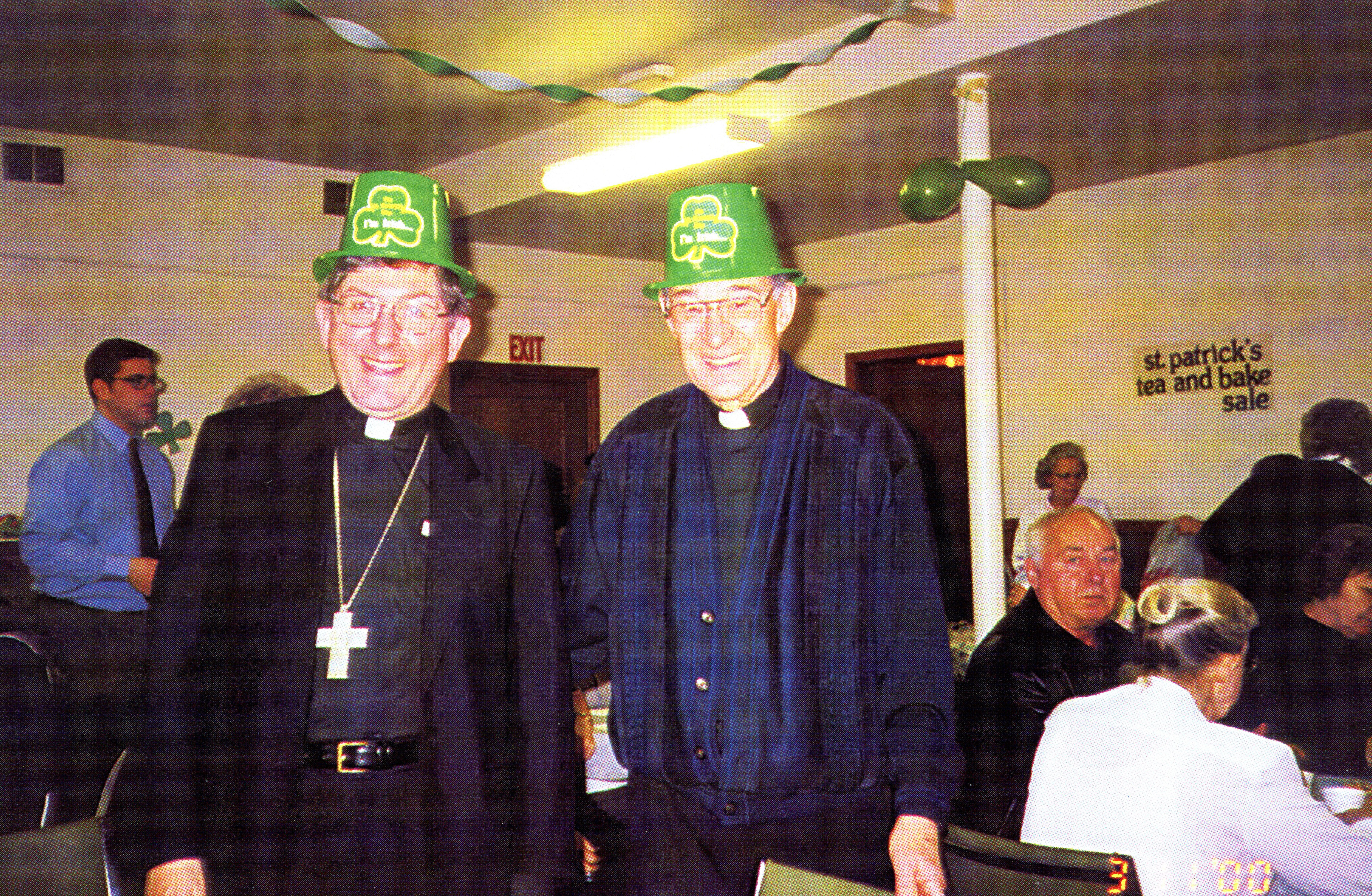 Cardinal Thomas Collins, then the archbishop of Edmonton, celebrates the 50th anniversary of St. Patrick’s Church with Father Frank Stempfle. 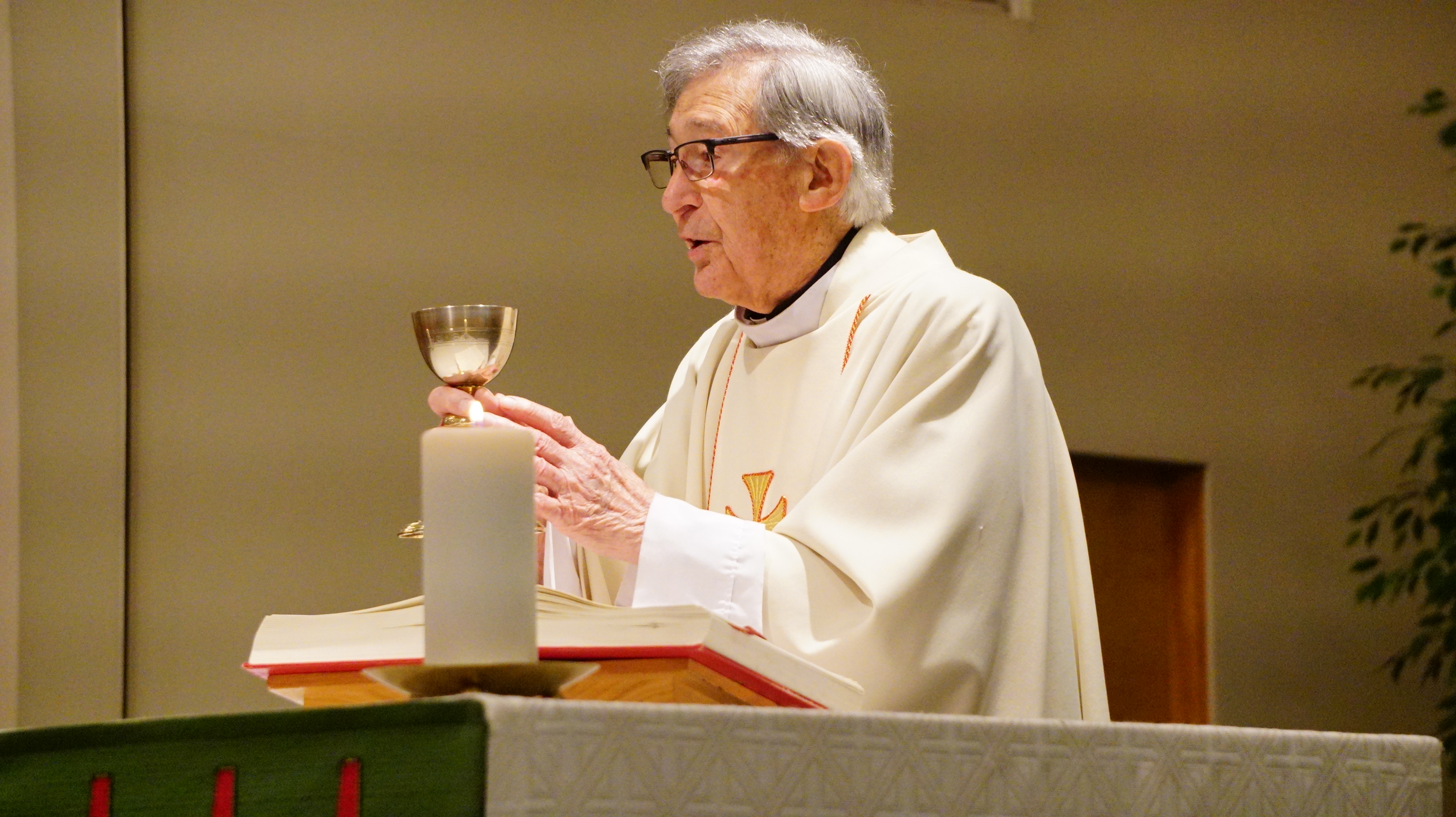 Father Frank Stempfle celebrates one of his final Masses at St. Patrick’s Church 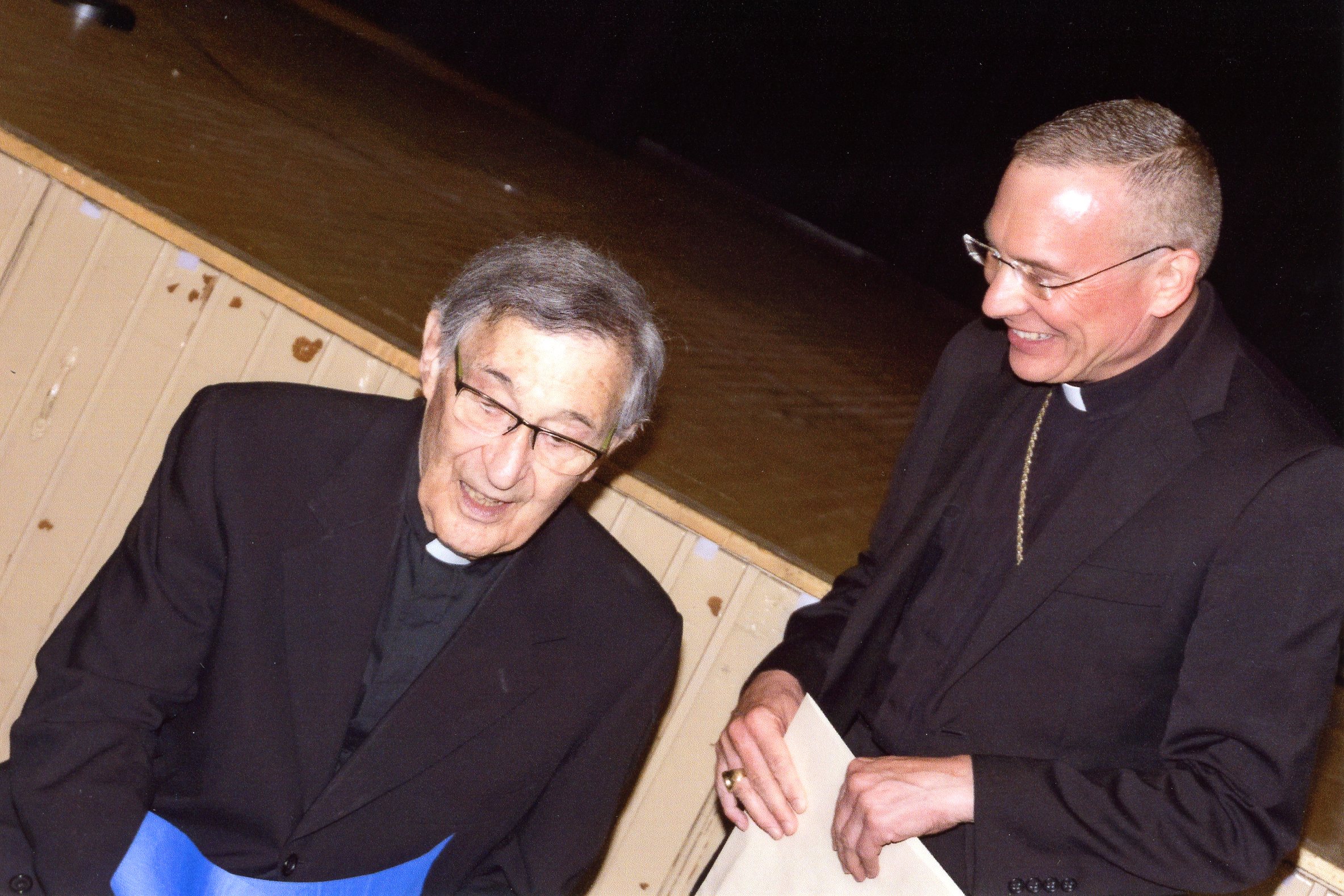 Father Frank Stempfle shares a laugh with Bishop Gregory Bittman, then the auxiliary of Edmonton. 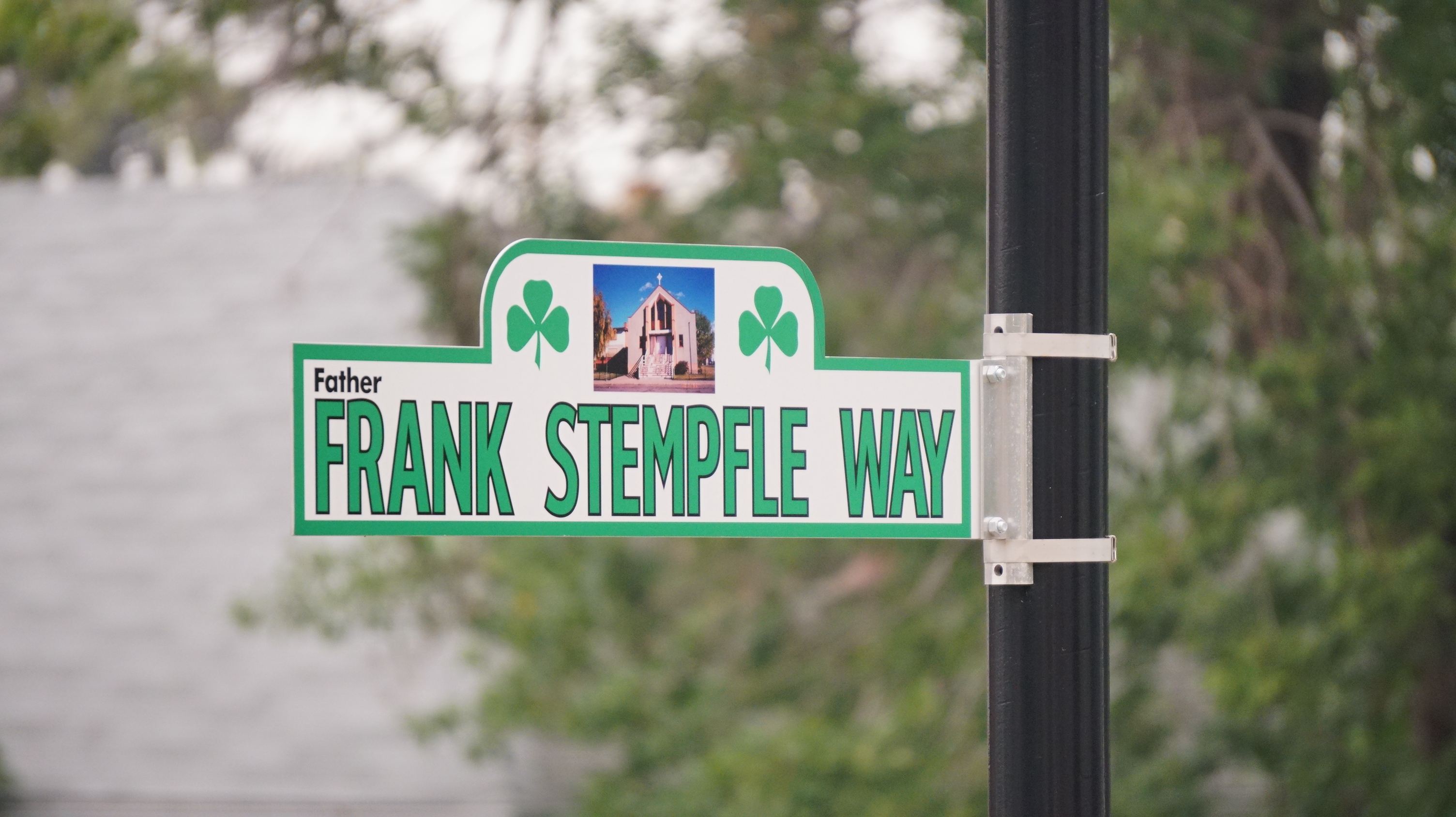 The street near St. Patrick’s Church was named after Father Frank Stempfle. 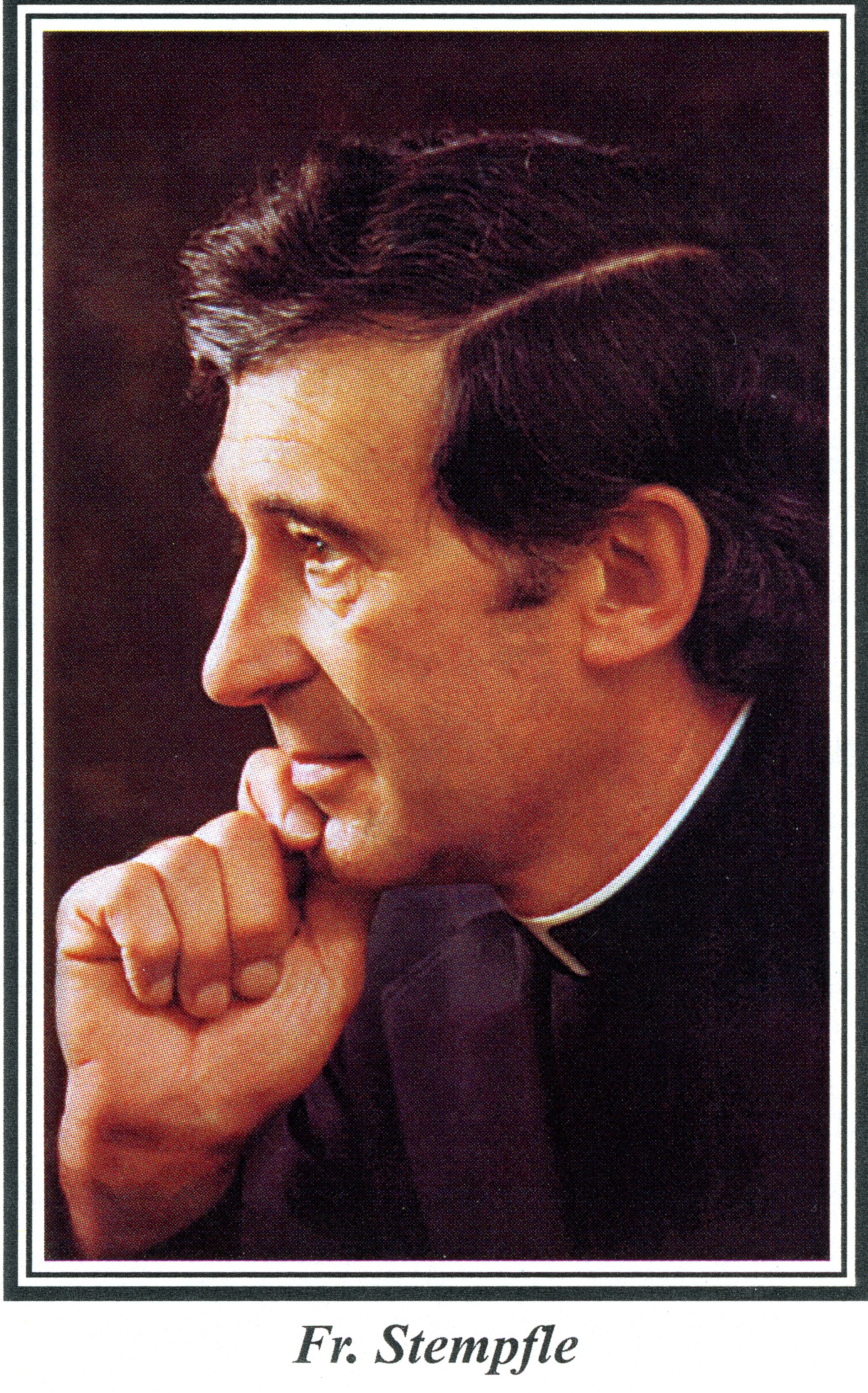 Father Frank Stempfle is seen on the 50th anniversary of St. Patrick’s Church. 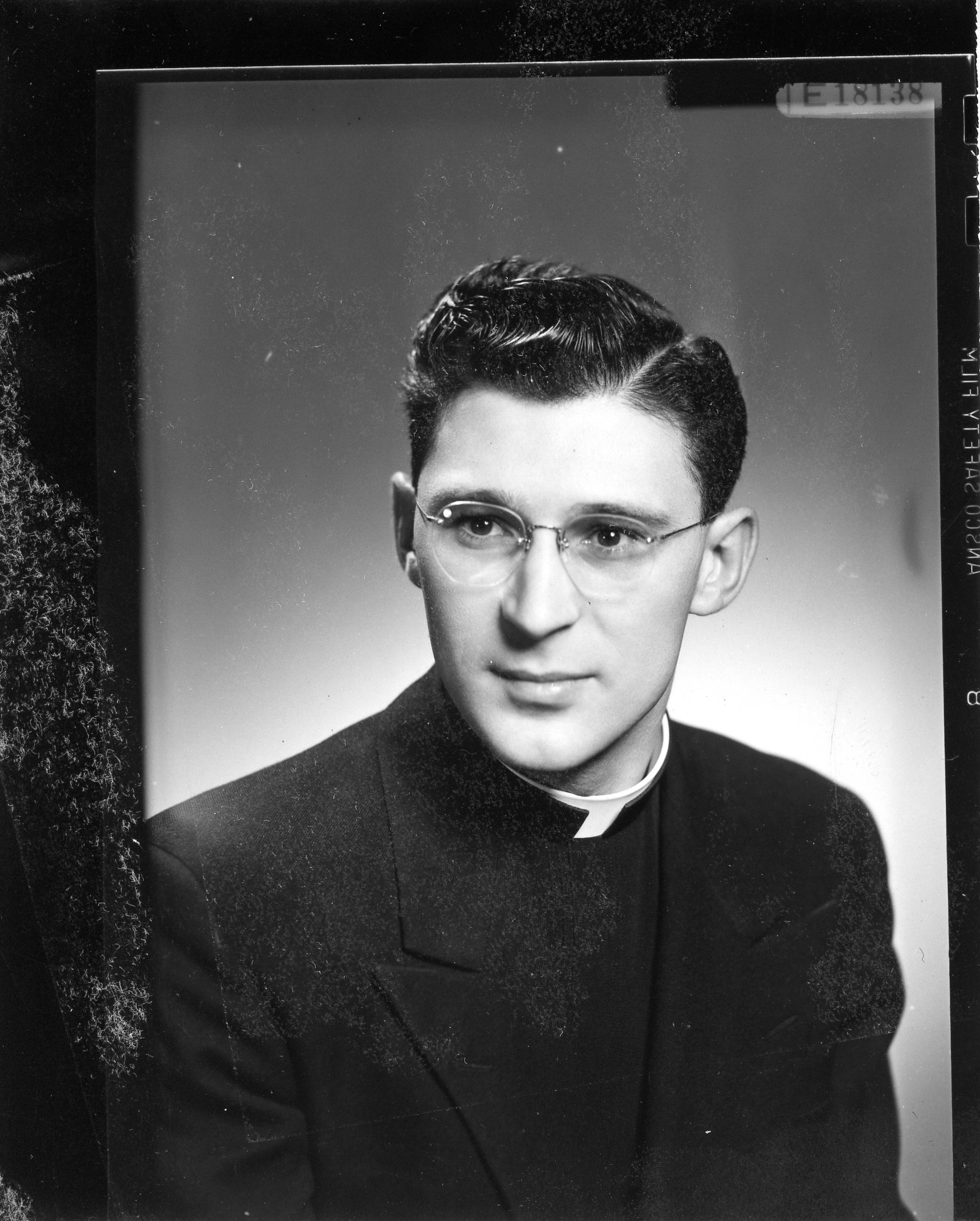 Father Frank Stempfle is seen as a young priest. 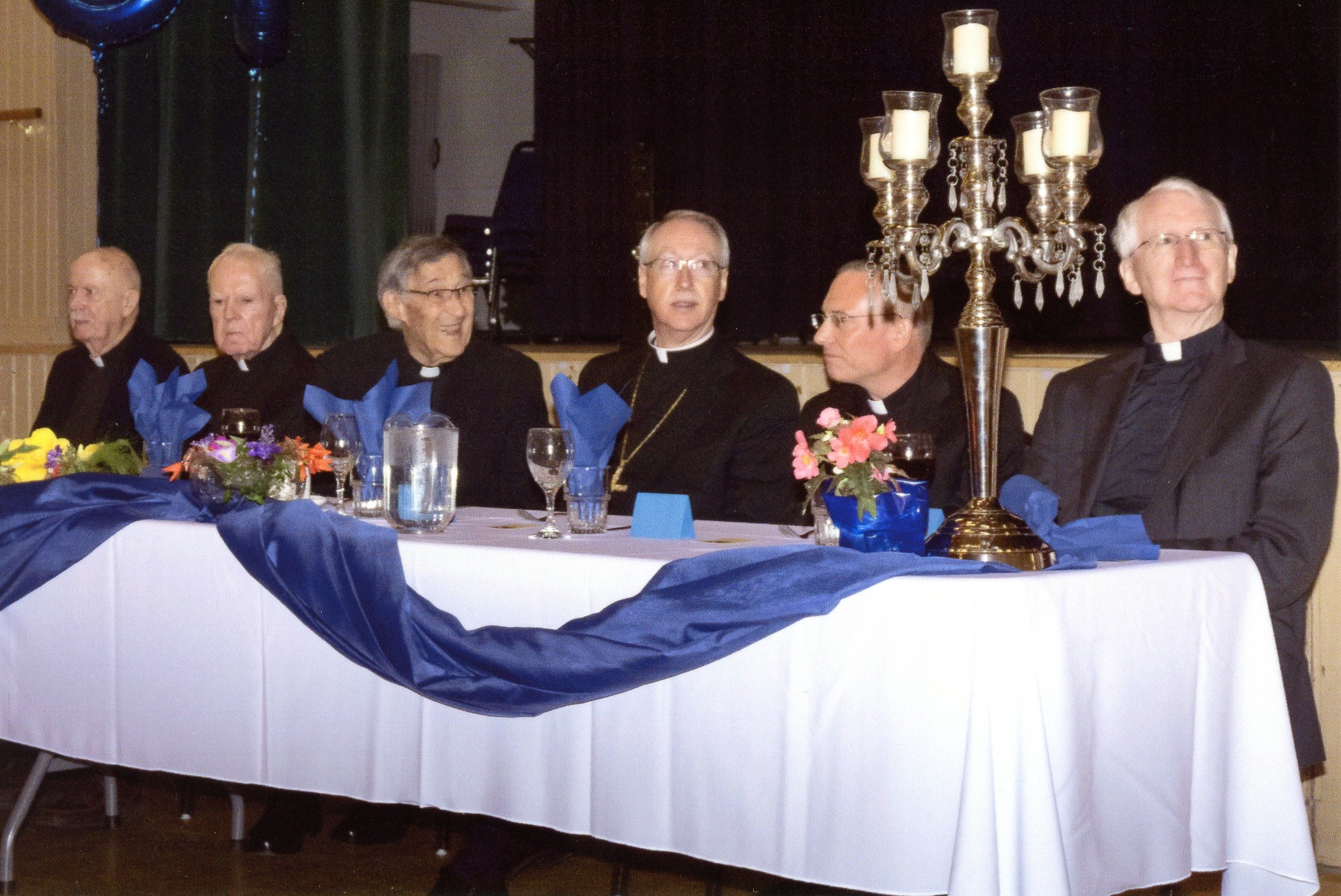 Teresa Kellendonk saw examples of Father Frank’s commitment when she was coordinating on-call visits of priests to hospital patients.

“He never, ever said no to a hospital visit, no matter what time of day or night,” said Kellendonk, the head of pastoral and parish services for the Archdiocese of Edmonton. “I called him once when he was playing pool with Father (Patrick) Baska, and he finished the game and beat him, but then he came to the hospital.

“He really is a model of compassionately accompanying someone who is dying,” she said. “A beautiful presence at the bedside.”

With typical humility, Father Frank admits that those visits to administer the sacrament of Anointing of the Sick have been one of the harder parts of his ministry.

“I need to sort of brace myself to be in their presence and minister to them on those occasions where people are seriously sick and dying. It’s not easy,” he said. “I simply try to do my best for them, that’s all. I always pray that I might have the grace, the wisdom, to know what to say and what to do under those circumstances.”

Father Mike McCaffery, a longtime friend, said Father Frank has always came through for him in an emergency.

“If I ever get called to fill in at a parish at the last minute, I always call Frank to borrow his homily, because he’s always got a good one,” he said. “And I’ve followed Frank’s advice myself: Keep it short. After eight minutes, even God doesn’t hear anything!”

Father Mike has played golf with Father Frank for some 50 years, and their rivalry is legendary: “Whenever he beat me, he’d announce it at Mass on Sunday.”

Although he’s slowed down a tiny bit, Father Frank still likes to hit the links. At the Edmonton Country Club, where he’s a member, a plaque on the wall attests to the fact that at age 87, he shot a round less than his age. Archbishop Smith, who is more than 30 years younger, says it’s still humbling to play with Father Frank.

“Through the game of golf, he’s helping me on my own spiritual journey and spiritual growth, because he continues to beat me at the game, anytime I play with him,” the Archbishop said. “That’s a great antidote to pride, you know!

“Sometimes I wonder if he purposefully flubs some of his shots so I wouldn’t get the mistaken impression that maybe he was spending more time on the golf course than in the parish.”

It’s hard to get Father Frank to brag about his golf game. He simply says that sports have always been a big part of his life.

“It helped me stay out of trouble!” he said with a laugh. “I always loved sports, and it was good for me, physically, mentally and emotionally. I was competitive – competitiveness was something that was inside me.”

Frank Stempfle grew up in the Rosenheim area, about 300 km southeast of Edmonton, a son of German immigrant farmers. He had an older brother, but two infants born after him did not survive.

“Both my mom and dad had a beautiful strong faith and that was passed along to us,” he said. Thoughts of a vocation, however, came only as he approached adulthood.

“I didn’t even think of the priesthood, or that I would be even capable of becoming a priest,” he recalled. “Then, when doing my Grade 12 at St Anthony’s College in Edmonton, I started thinking, and thought I’d at least give it a try. Part of the reason I entered the seminary was because of the deep faith of my parents, the great example of my parish priest, Father Ralph Malone, and the Franciscan priests at St. Anthony’s.”

Father Frank Stempfle says he didn't even think of the priesthood at first.Lincoln Ho, Grandin Media

At 18, he entered St. Joseph Seminary, and at 25 was ordained at St. Norbert’s Church in Rosenheim, which is now a Canadian historical site. While most newly ordained priests today get their first posting as an associate pastor, Father Frank assisted at Heisler for just a few months before being named pastor at Winfield and its three mission parishes southwest of Edmonton. He went on to serve as pastor at Consort, Hardisty and Galahad, where he enjoyed boating on the area lakes and teaching catechism to young people in the summer.

Some of his most enjoyable years came with his assignment in 1964 to Wainwright, southeast of Edmonton. He became a chaplain to the local military base, learned to fly an airplane (“It was a Piper Cub two-seater, and I had a barrel of fun with it!”), took up water skiing and, oh yes, oversaw the building of the Blessed Sacrament Parish church.

“We had a great mix of hard work in the parish and on the military base, along with a lot of fun things.”

In 1970 he began a seven-year term at St. Patrick’s, a parish in inner-city Edmonton where he faced two particular tragedies. In 1976 the parish caretaker, Leo Bilodeau, was murdered during a break-in and robbery at the rectory. Less than a year later, an arsonist set fire to the church, causing considerable damage to the stained glass windows and other parts of the building. Through it all, he said, the parishioners remained faithful and determined to rebuild.

In 1977, Father Frank was posted to Assumption Parish in south Edmonton, only to return to St. Patrick’s in 1986. It has been his home ever since. He says he is sad to be leaving the parish, but just felt “it was time.”

“I felt that I didn’t quite have the energy anymore to do the work, and I thought that I should retire before I was unable to do the job properly.”

Father Frank is looking forward to spending time with family ̶ including 17 great-great nieces and nephews ̶ and friends, and not having to worry about preparing a homily. But it will feel strange not to have a “home church.”

“I won’t have an altar to go to,” he said. “If I want to say Mass in a church, I’ll have to look around and find someone who will let me in to say Mass.”

Given his popularity with his brother priests, that likely won’t be a problem.

7 thoughts on “From the farmhouse to God’s house”