The black cover dropped and unveiled the mural. Ingrained in its tiles was the 160-year legacy of Catholic education in Alberta, and the Grey Nun who set it all in motion.

The mural honouring Sister Marie Alphonse — the province’s first educator — features 1,400 tiles with images of textbooks, rulers, and rosary beads. Six hundred of the tiles were painted by professional artists, students and staff at Greater St. Albert Catholic Schools, as well as by community members.

Entitled The Humble Seamstress, the mural at Sr. Alphonse Academy is a nod to Sister Alphonse who learned Cree so she could communicate with indigenous people, as well as to her skill at making clothes. An additional mural, The Tree of Life, was also commissioned for the kindergarten to Grade 9 school that opened last year.

“Sister Alphonse would be so happy if she could see this,” said Sister Jeanine Coulombe, local leader of the Sisters of Charity (also known as the ‘Grey Nuns’), at the Sept. 19 mural unveiling. “She’d probably say her work was all worthwhile.”

Her first class in 1863 was a group of seven orphans — the first Catholic classroom in Alberta. From those humble beginnings, Catholic education in Alberta has grown to today’s more than 180,000 students in 24 school divisions.

“Catholic education is a very precious appreciation of ours, and it seems to be very firm and strong now,” said Sister Coulombe, 80, who taught on First Nations in southern Alberta early in her career.

“We speak to people all the time who were taught by the Grey Nuns. They tell us how they knew sister after sister. So we have left a legacy. It’s beautiful and heartwarming.”

David Keohane has been a part of that legacy for the past 38 years. He’s been a teacher, principal and superintendent in Leduc, East Central and Greater St. Albert Catholic schools. For him, Sister Alphonse reflects the vital role Catholic education played in forming the province.

“In many ways, Sister Alphonse tells the story way back then of what we’re still doing today,” Keohane said. “The fact that our legacy begins with a young nun who helped form the St. Albert community…as Catholic educators that makes such a beautiful statement.”

“Our call to teach and care for others originates in the example of Jesus Christ. That mandate was seen in the life of Sister Alphonse and it still speaks to us today.”

“Our education should touch people at a very visceral level. It creates an emotional bond,” he said. “We’ve been able to survive and thrive because we don’t need permission to state that we have a loving relationship with God, and he left us the example of Jesus Christ by which we can form our lives and make the world a better place. We’re really blessed to have this educational model in Alberta. We are empowered to be who we are.”

Catholic education came to Edmonton in 1888 with the opening of St. Joachim School. It had 23 students taught by two Faithful Companions of Jesus sisters. Today, there are 43,330 students in 95 Catholic schools across the city.

In the 1960s, priests and nuns were among the school’s faculty, but as more schools opened they took a less prominent role.

When she retired in 1981, Sister Annata Brockman was the final member of a religious order to serve as principal in Edmonton Catholic Schools. Her legacy is honoured to this day at her namesake school.

The way faith is taught and expressed has also changed.

In the past, classroom prayers consisted of reciting the Our Father and the Hail Mary. Today, Monsignor Fee Otterson students are encouraged to explore their personal faith by writing their own prayers and sharing them.

“It really contributes to the richness of our faith,” Whalen said. “We’ve had students read their prayers and talk about how God has helped them through their struggles. Or a student will ask the class to pray for their grandfather who passed away. It absolutely floors me when that happens. It can be very personal and moving. Things like that just show how fortunate we are.”

Grade 9 student Kyla Bondoc says her faith has deepened through the school choir and volunteer work with disadvantaged youth in inner-city Edmonton.

“Just in things like choir, I can express my faith through singing and sharing that gift,” the 14-year-old said. “Even for students that weren’t raised Catholic, the opportunity to learn about religion can be so beneficial. It especially is in understanding how we treat others and treat ourselves, because our love of God is so rooted in treating others with that same love He has.”

Alberta’s Catholic schools also welcome students of other faiths. Keohane said that diversity has played a key role in sustaining the schools, with larger school districts and the ability to serve more students. While there is a diversity of faiths, Keohane says the school’s Catholic identity is still as important now.

“We tell our Christian story, that’s who we are and that’s why we exist. But we’re also very open to all people who want to benefit from a faith-based mandate of education,” he said.

“When I started it was more so just intended to educate Catholic families. But we’ve come to recognize more and more that Catholic education is not just this separate function outside of the world, but a part of it. So we welcome all who want to grow in their faith.” 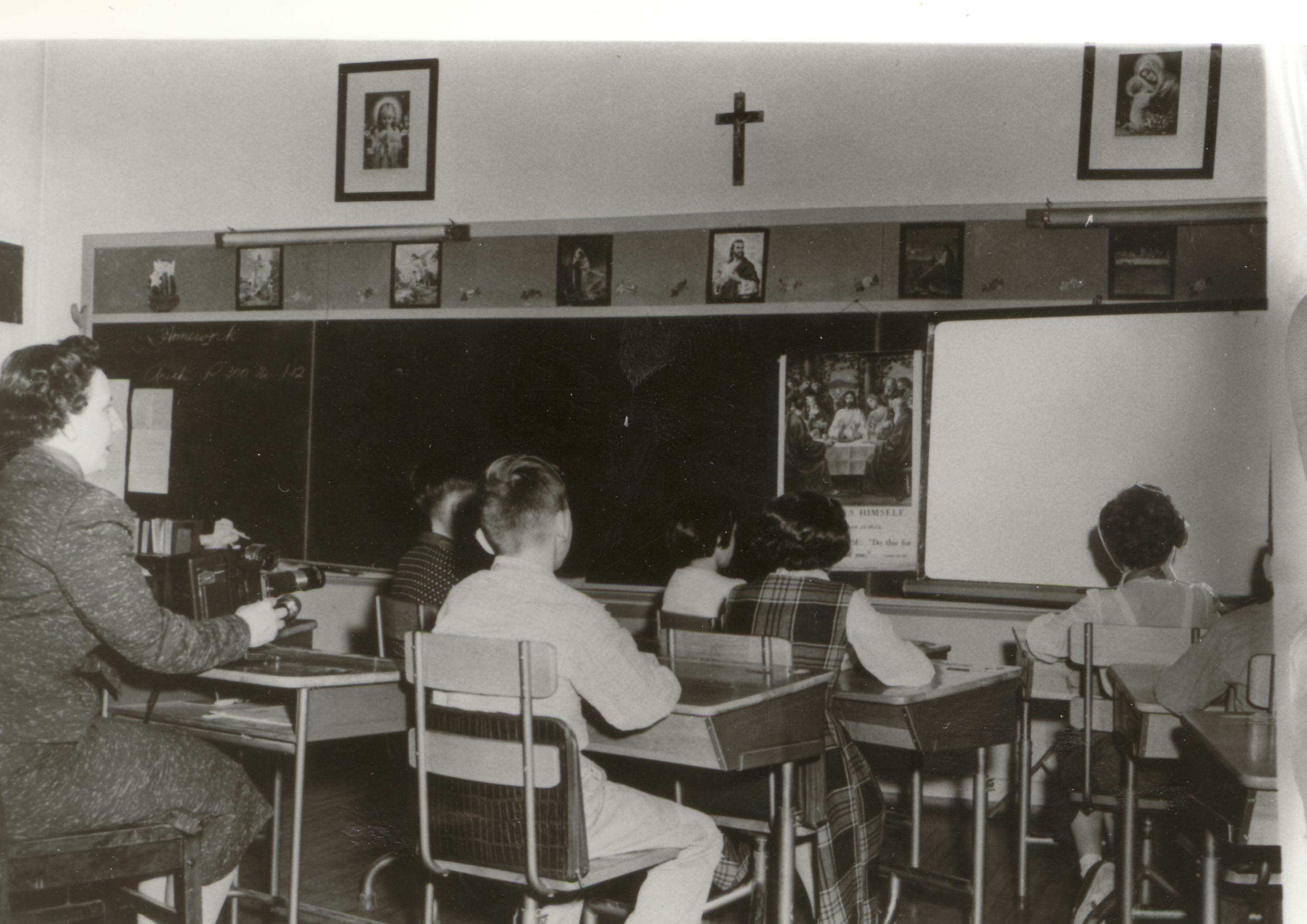 Students at Grandin School in the 1950s. 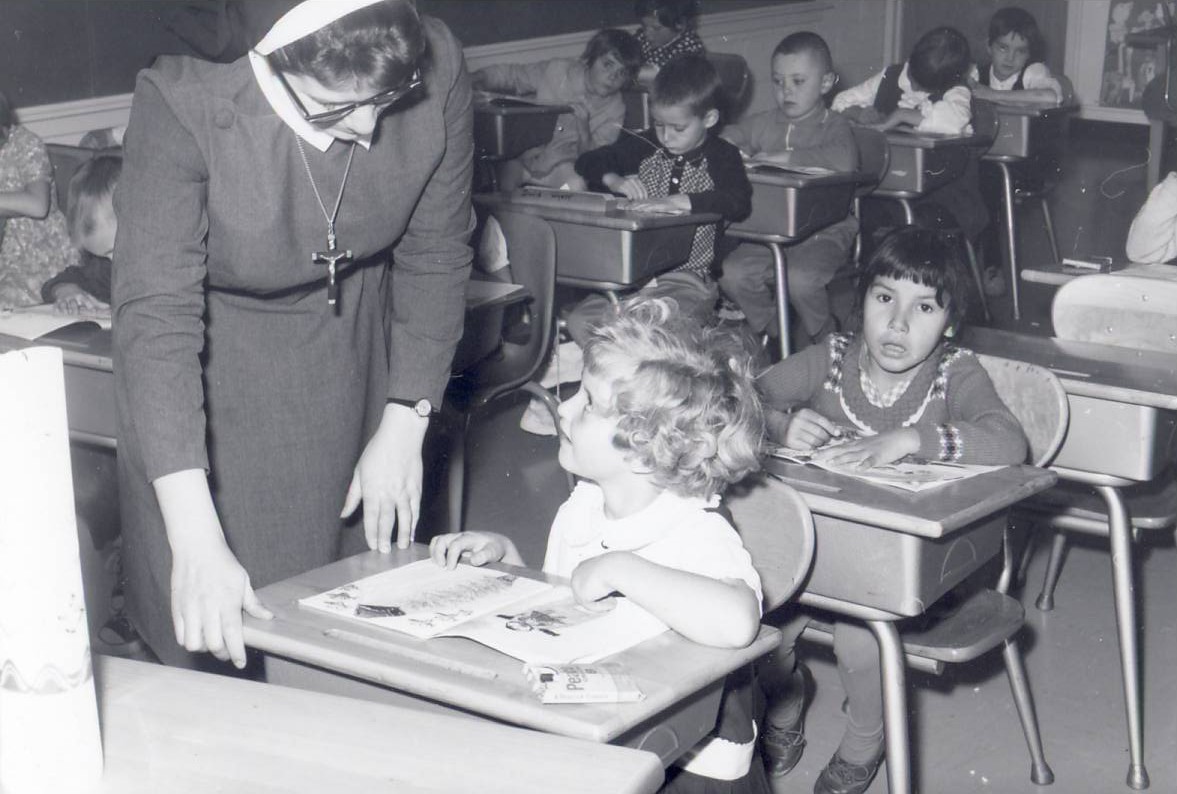 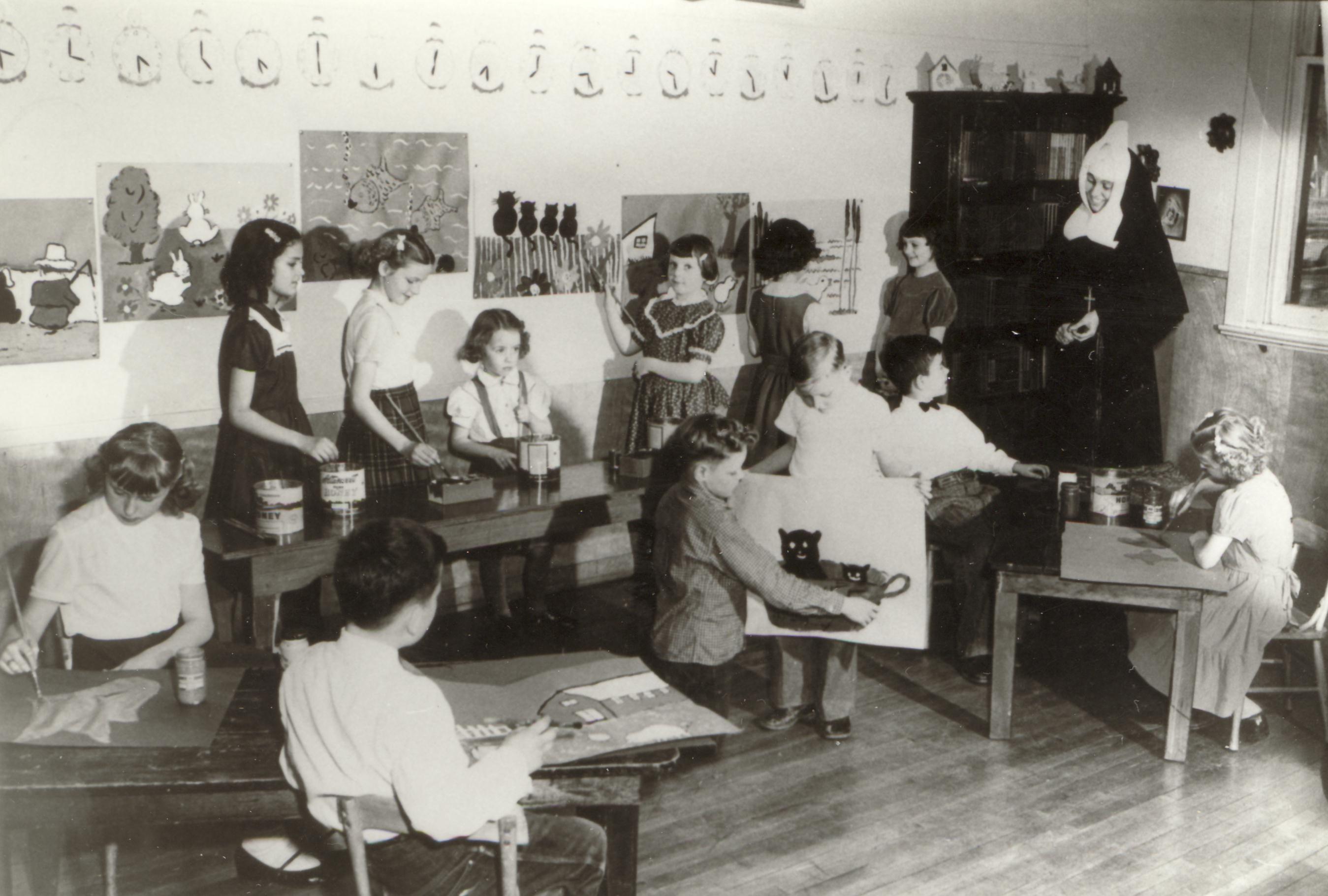 Sister of Providence Mary Cosmas with students at Little Flower School, 1960s. This was the last one room school in Edmonton. 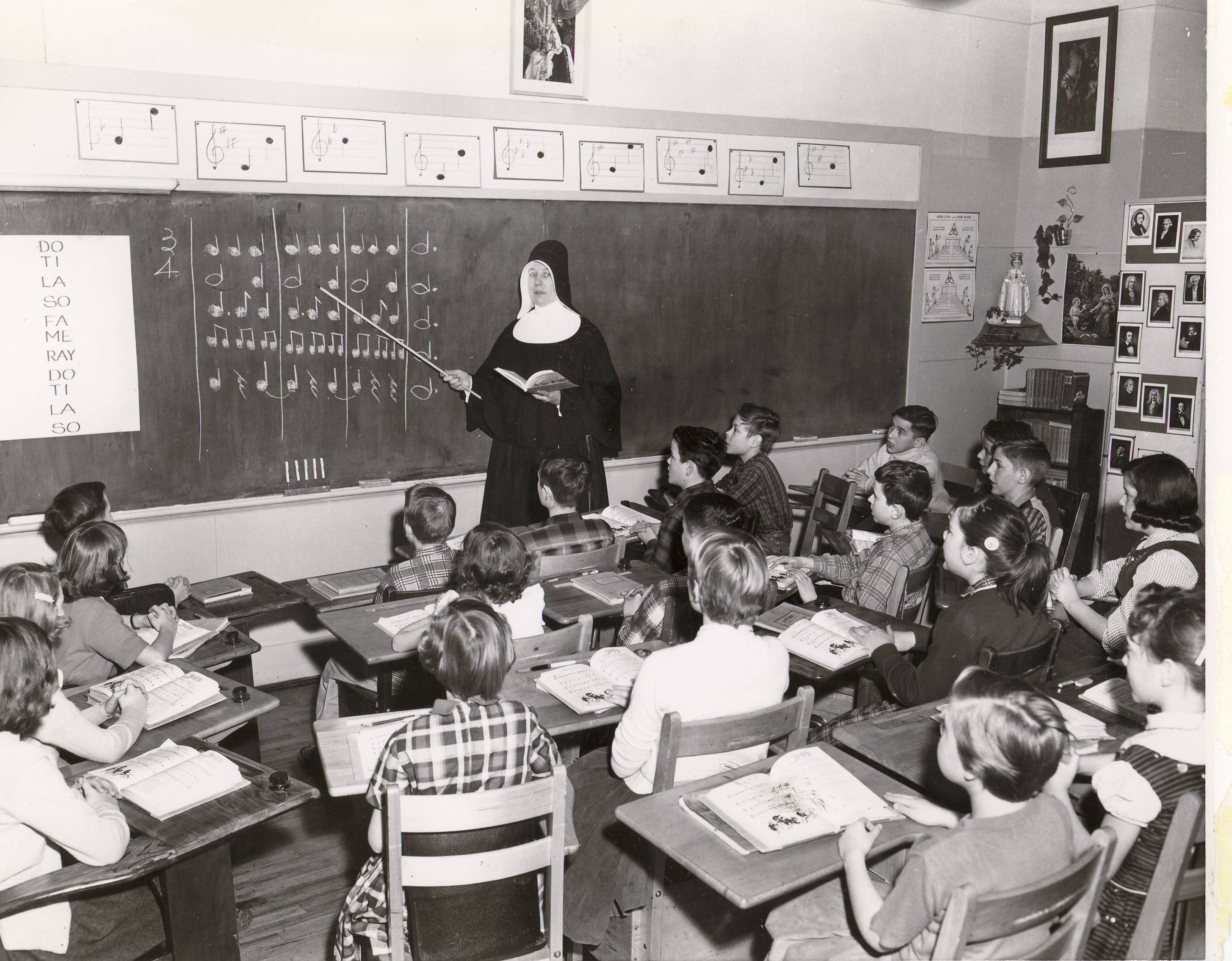 Sister of Charity nun with students at St Vincent School in Edmonton, 1960s. 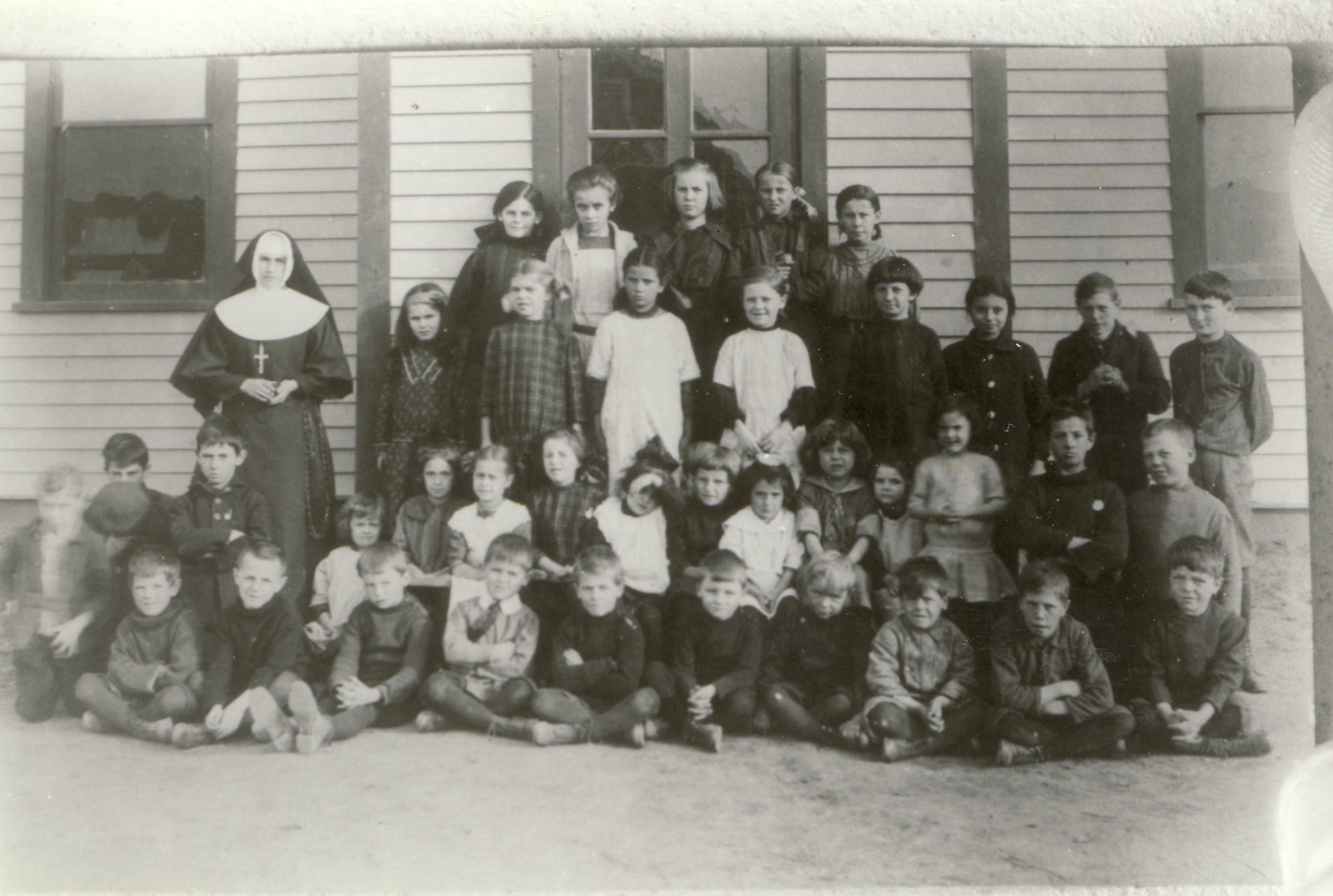 Sister Victory and her students at North Edmonton Separate School in 1914. 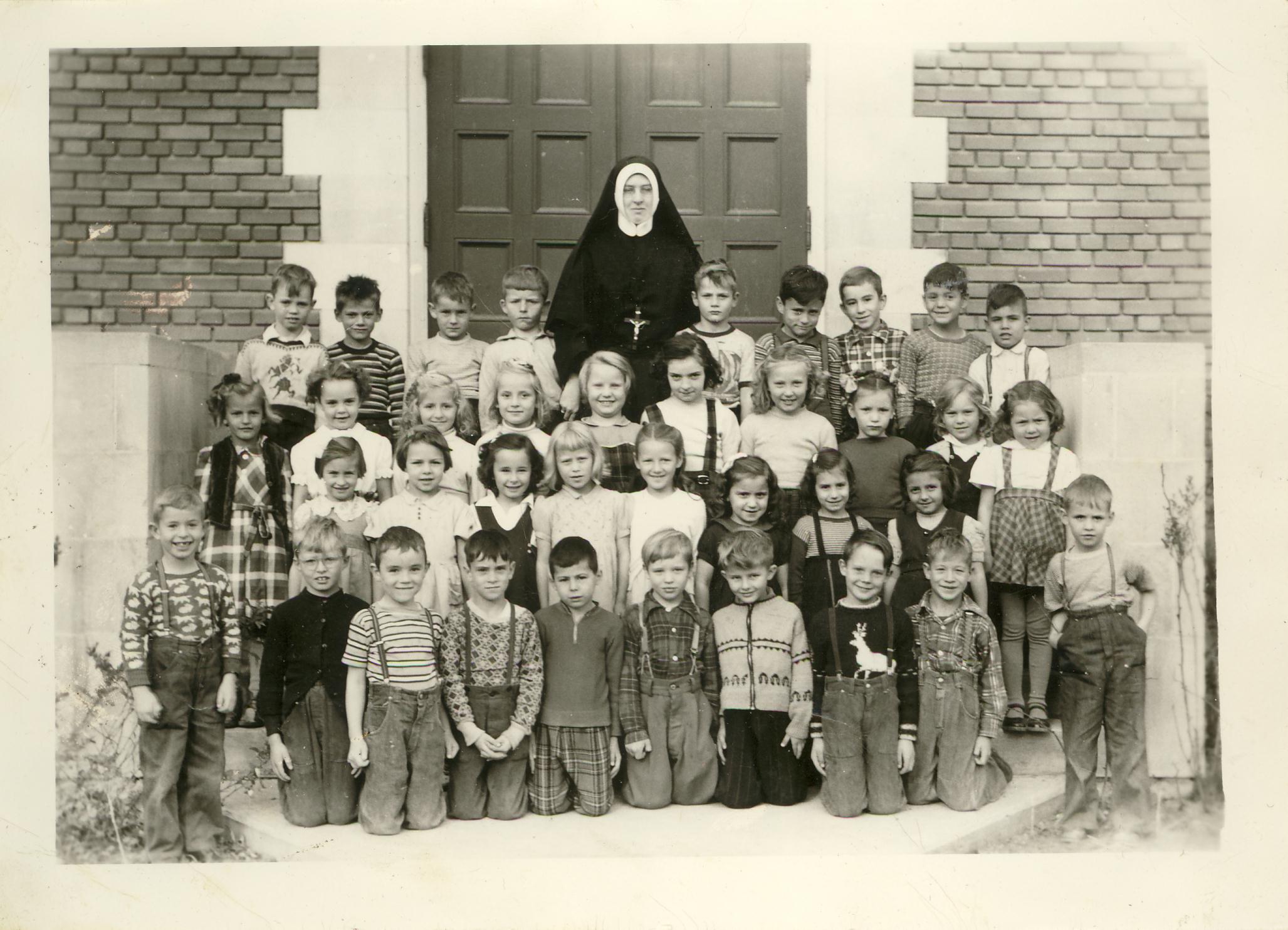 Ursuline sister with her students at St. Edmund School in the 1950s.

Alberta is one of only of three provinces that still has publicly-funded Catholic school divisions. In recent years, critics have called for an end to the public funding of Catholic schools. An organized campaign called Together for Students aims to amalgamate Alberta’s schools into a single monolith.

“There was a time when that conversation of only needing one school system would never come up. Now it’s something a lot of people are questioning,” Whalen said.

“It’s a major challenge but at the same time it has made us stronger. We know we have to stay true to what we believe in and never take it for granted.”

Keohane says voices against Catholic education have definitely increased, but it ultimately means Catholic educators today must be more resolute than ever in holding to their mission.

“People will rush to the judgment that as the world becomes more secularized, Catholic education is just not relevant anymore. But I would argue we’re needed more than ever,” he said.

“We recognize we’re not for every family, but we offer them a choice. We provide that opportunity for families who want to bring faith into their lives and into their community.”

That opportunity to have a faith-based education is owed to the work of a few determined nuns and missionary priests 160 years ago. The Catholic schools across Alberta are just one example of the permanent legacy the Church has created in the province.

For Sister Coulome and Sister Marie Rose Hurtubise, 86, the mural of Sister Marie Alphonse shows the legacy of the Grey Nuns will not soon be forgotten. Now retired from active ministry, the sisters are confident in the future of Catholic education.

“As Grey Nuns we live for the glory of God, and now coming to spend my final days in St. Albert, it’s like we know where we came from and we know where we’re going,” said Hurtubise. “It’s the beginning and the end.”