Skip to content
The Archdiocese currently operates two camps under its Office of Youth Evangelization: Our Lady of Victory Camp at Gull Lake, northwest of Red Deer; and Camp Encounter at Lac La Nonne, northwest of Edmonton.

Summer camp is a place where games are played, skills learned, and friendships forged, all against the backdrop of a natural outdoor setting. For hundreds of young people in the Archdiocese of Edmonton, a week at camp is also an opportunity to grow in their Catholic faith and in their appreciation of God’s creation. 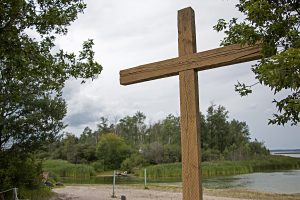 But how effective is the camp experience as a ministry of the Church? How might it be improved? Those are the kinds of questions the Archdiocese is asking as it embarks on a review of youth camps ministry, beginning with a call to stakeholders for their input. In a letter dated Jan. 25, Archbishop Richard Smith announced that its two youth camps will not operate after the 2018 camping season, while consultations take place and the results are analyzed.

The Archdiocese currently operates two camps under its Office of Youth Evangelization: Our Lady of Victory Camp at Gull Lake, northwest of Red Deer, established in 1946; and Camp Encounter at Lac La Nonne, about 110 kilometres northwest of Edmonton, established in 1980. In 2016, the most recent year for which figures are available, they attracted nearly 700 campers.

But there are problems. The camps continue to record budget deficits, and their facilities are in need of repair.

“Both (camps) have played important roles in the Church’s ministry to our precious young people,” Archbishop Smith wrote in his letter to parishes, schools, parents and other stakeholders.

“A recent assessment has revealed that facilities at the camps have so deteriorated over the years that the need for upgrades has become urgent. It is incumbent upon us to ensure that any investment of resources by the Archdiocese in response to this needs be done carefully, deliberately, and responsibly.”

“Therefore, we are beginning an extensive consultation of stakeholders associated with our camps ministry. The summer camping season for 2018 will continue as usual. However, we shall not operate the camps after October 5, 2018, or in 2019 while the consultations take place.”

Lisa Macquarrie, coordinator of the Youth Evangelization office, is encouraging anyone who is connected to the camps or interested in youth ministry to participate in the first stage of stakeholder consultations, a short online survey that can be found at  https://caedm.ca/CampsSurvey.

The survey will remain open to the end of February.

“I’m excited to see the results of the surveys, and I hope lots of people will take the time to engage in them, because it really does help us in planning everything from what we need in facilities to what we need to offer in programming,” Macquarrie said. “I’m especially eager to hear from people who either are not aware that we have camps in the diocese or who have been using other camps because they meet a unique need.”

In the meantime, the full summer camping schedule will go ahead this year, and online registration is open at www.olvc.ab.ca and campencounter.com.

A couple of new features are also planned. Camp Encounter is adding a seventh week this summer because of heavy demand last year.

“We opened registrations only a week ago, and we already have registrations flooding in; I think people learned from last year at Camp Encounter, to act quickly!” Macquarrie said. “We’re hoping that extra week will accommodate the people who may not have gotten an opportunity to come last year.”

At Our Lady of Victory Camp, there will still be six weeks of summer programming, but this year it will include one week as a family camp. Families will be able to stay either in serviced cabins or come with their own recreational vehicles and use all the camp facilities. In addition to summer camping, both facilities offer programming in the spring and fall for school and other groups who come for a day or two.

Macquarrie is passionate when she talks about the camps, and no wonder. She started going as a nine-year-old herself and has attended in different roles ever since then. She was appointed camp director in  2001, and took overall responsibility when she was appointed to the youth office in 2015.

“I met my husband there, and really great friends that I’ve had the privilege of working with as staff members there. It’s very much a ministry that’s had a huge impact on my life.”

According to the archdiocesan Finance Office, spending on the camps in 2016 totalled almost $567,000. After accounting for revenue from camp registrations, facility rentals and $95,509 in donations, the camps recorded net expenses of $101,053. 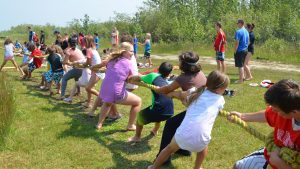 They currently employ five year-round staff, and another 30 seasonal workers, including cooks, first aid attendants, and camp counsellors. About 150 volunteers provide additional support in roles such as dishwashers, junior counsellors, nurses, and kitchen helpers. Several priests from the Archdiocese attend camp as well, providing mass, adoration, reconciliation and friendship with the campers.

Archbishop Smith said he hopes to develop a clear vision of the camps ministry before making any financial decisions, and he looks forward to hearing from stakeholders.

“I am grateful to all who support the ministry of our camps in any way,” his letter states. “Let us pray together for the light of the Holy Spirit to guide our discernment.”

Sheedy: St. Joseph is a guide to being an everyday saint