Blessed John Henry Newman has such an emotional and spiritual link to the students and staff at Newman Theological College that it’s only fitting that the college has a tangible link as well.

Strands of Newman’s hair are now encased in a reliquary, a special container that will be permanently housed in the college chapel.

The relic of Blessed John Henry Newman includes strands of his hair and was donated by the Birhimgham Oratory in England.Lincoln Ho, Grandin Media

The relic was first donated to Newman Theological College in 2011 by the Birmingham Oratory, a religious community in England founded by the 19th-century cardinal, theologian and soon-to-be saint.

“It’s very unique to have a relic of your school’s namesake,” alumnus Darryl Tymchuk said after a Mass and open house held on Newman’s feast day, Oct. 9.

“It gives a more personal connection to Cardinal Newman and shows after these 50 years, the college’s connection to Newman has definitely deepened.”

Edmonton Archbishop Richard Smith carried the relic to the chapel in a solemn procession, followed by a choir and a procession of priests, seminarians and laypeople.

The event honoured the college’s 50th anniversary and the upcoming canonization of Newman at the Vatican on Oct. 13. A variety of other events will be held over the coming year, including lectures and conferences related to Newman’s work.

“Who Newman was really describes us as a college,” said Tymchuk, a pastoral assistant at St. Albert Parish, who graduated with a Master of Divinity degree last year.

“He was a man formed by theology. He saw theology as this well that never runs dry. It’s something that continues to develop, so we study and know it more and more. I left here knowing my degree was only a start to getting into theology and the mystical love of God.”

In his homily, Archbishop Smith reflected on the risks Newman faced in joining the Catholic Church at a time when Catholics could not participate in government or attend certain universities in England. He said Newman is an example of unwavering devotion to which all Christians can look.

“God appoints all men and women to a particular service that is not given nor exercised by any other,” said Smith. “Cardinal Newman’s example invites us all to open our hearts to Christ and allow him to speak to us and transform us.” 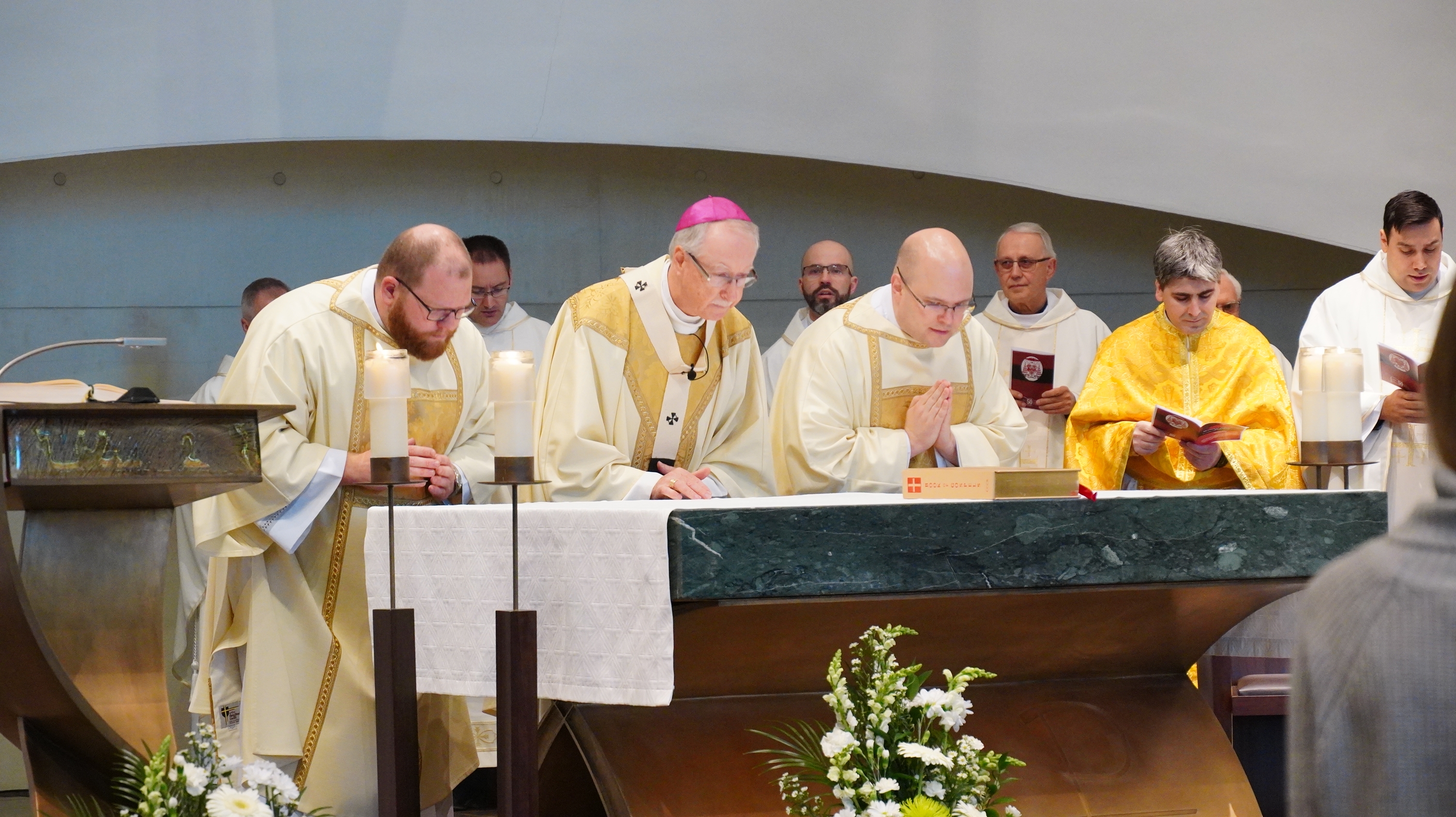 A Mass was celebrated in honour of John Henry Newman’s feast day at the St. Joseph Seminary on Oct. 9 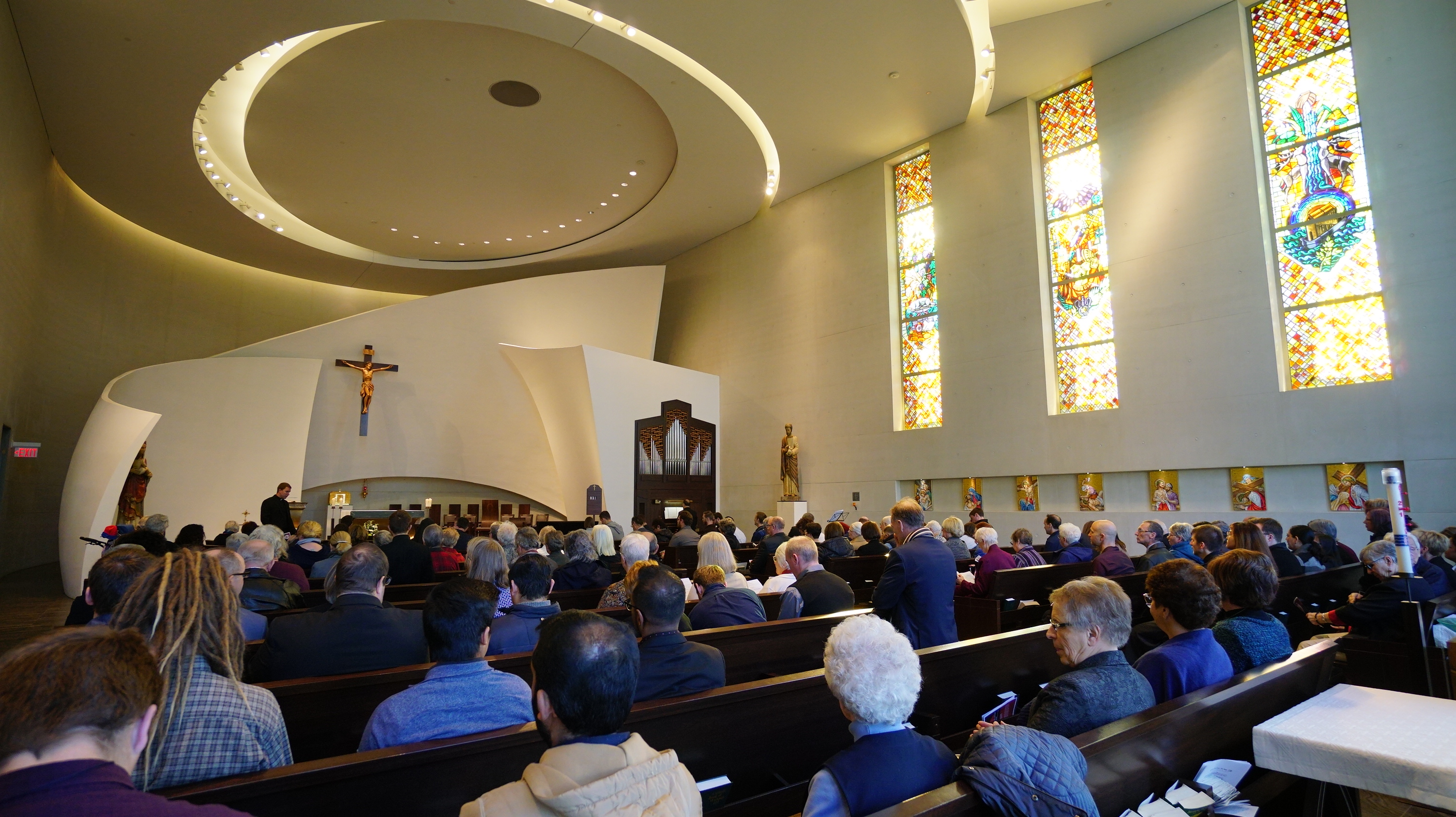 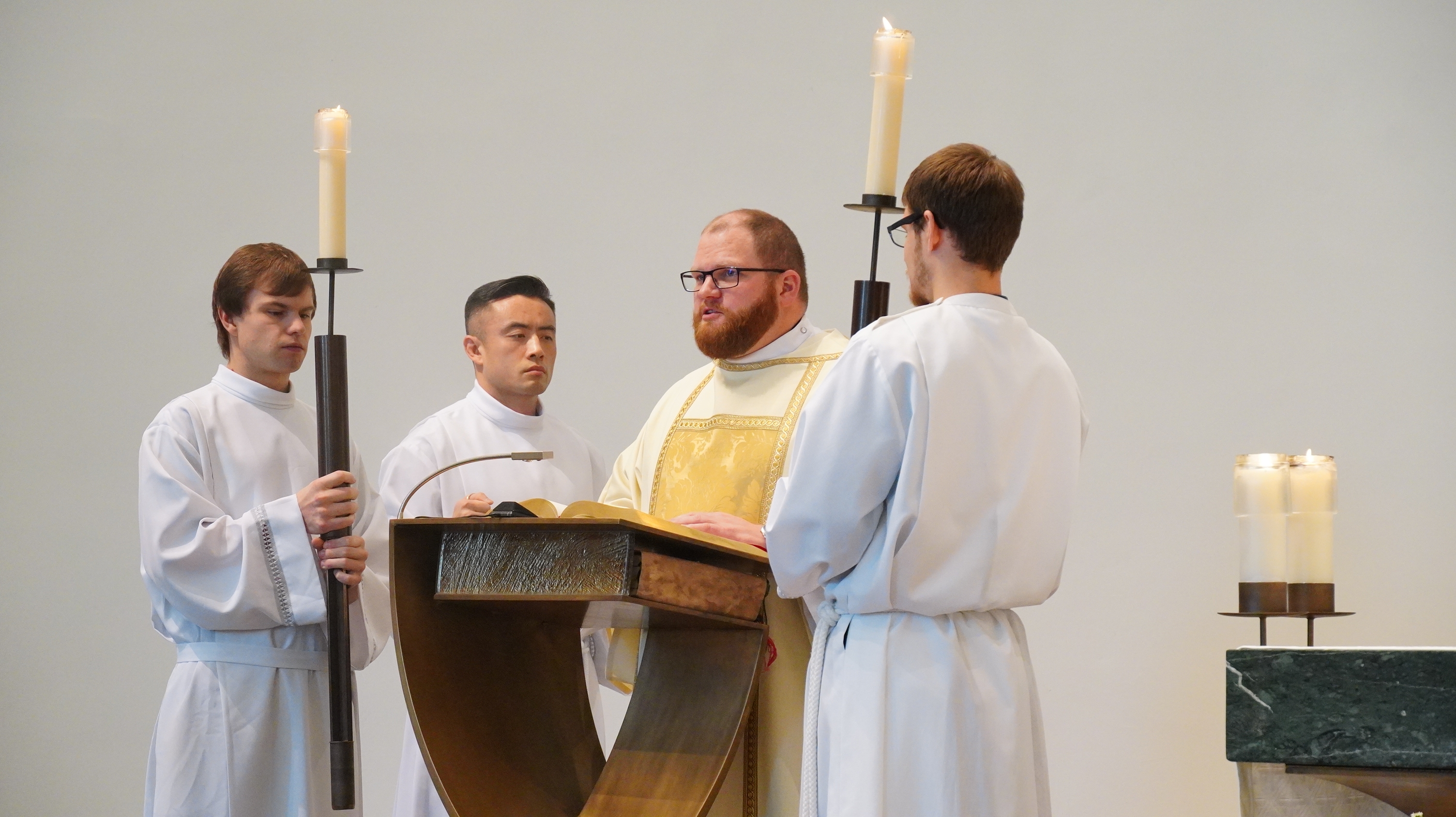 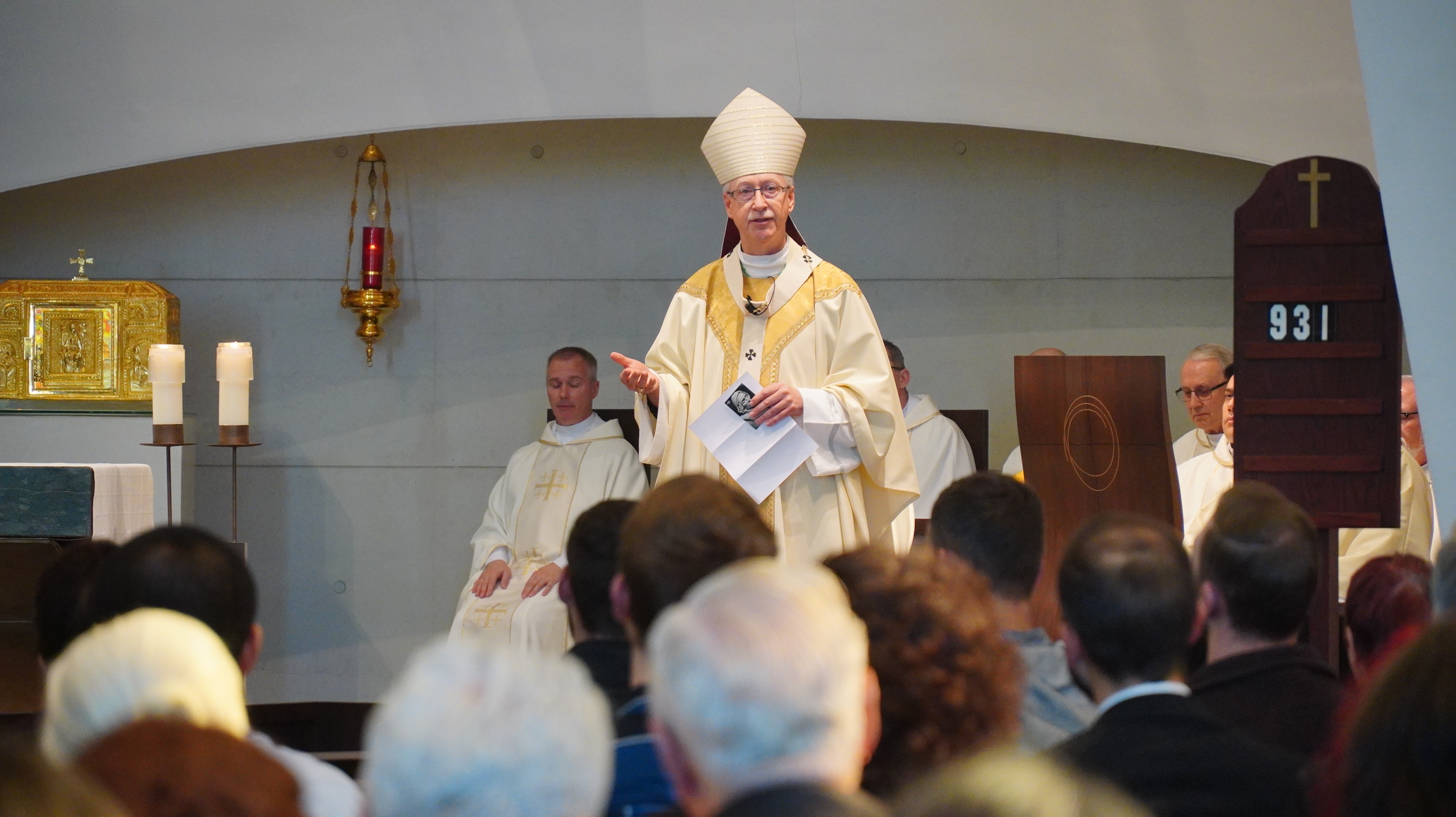 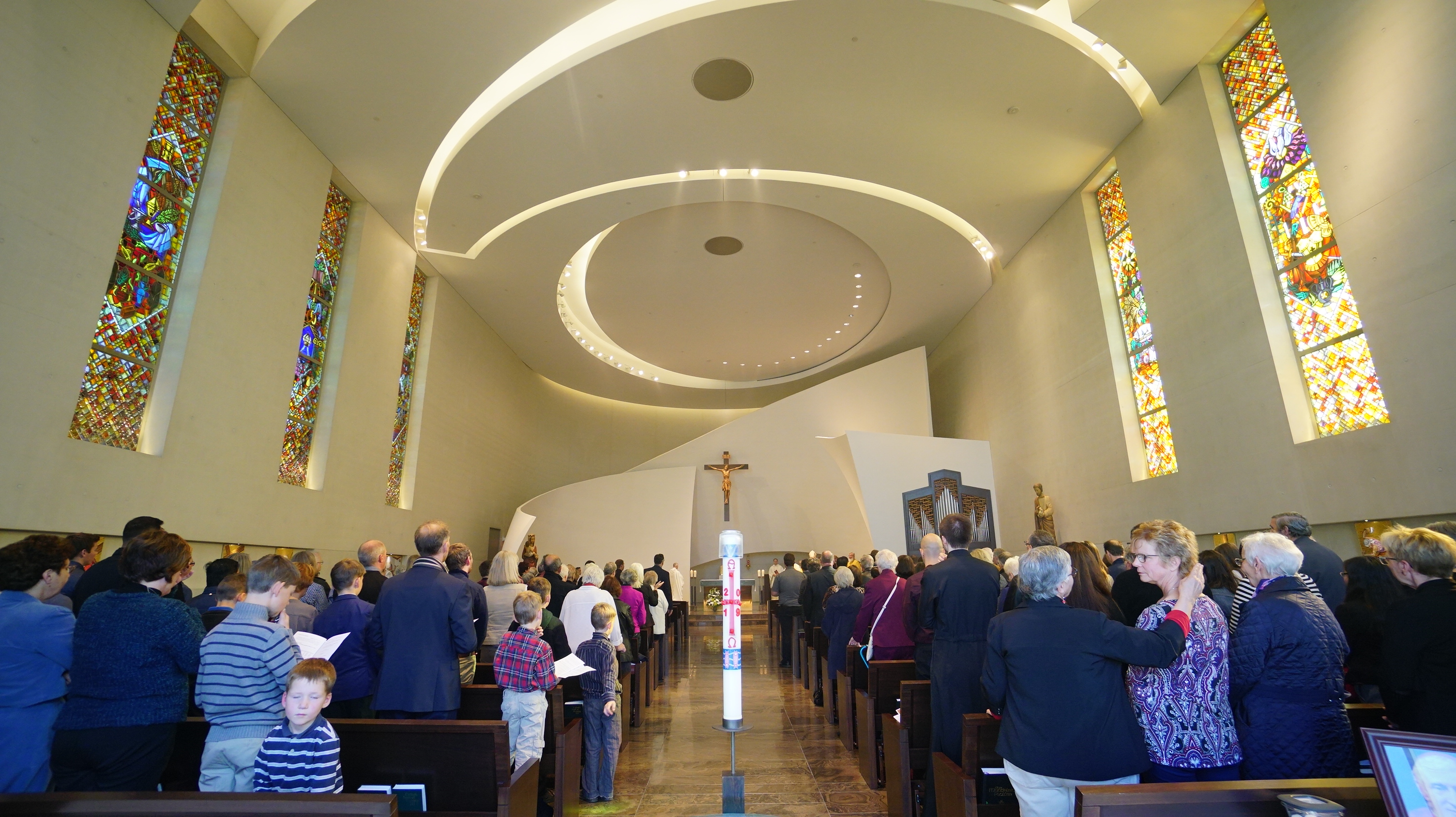 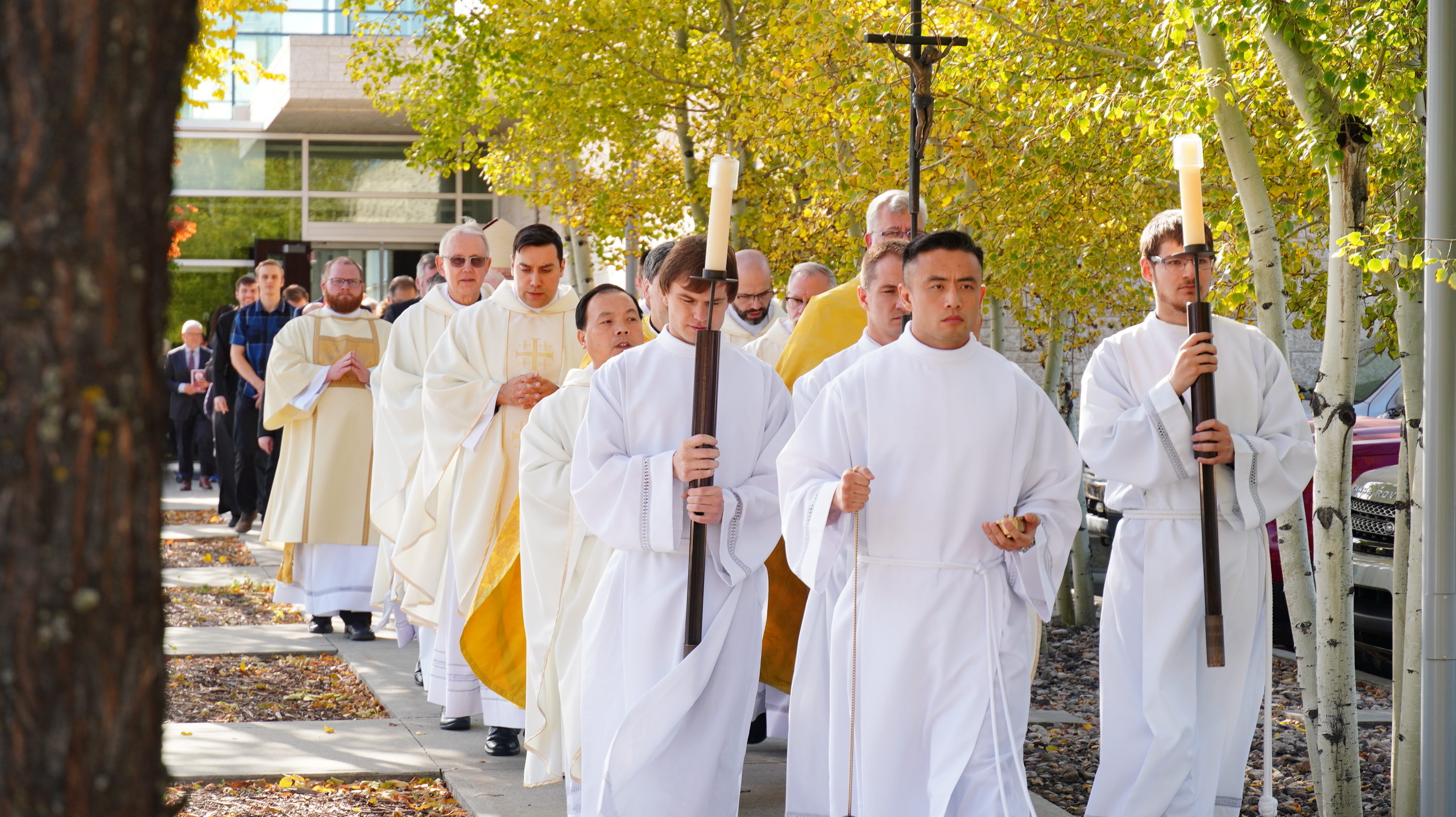 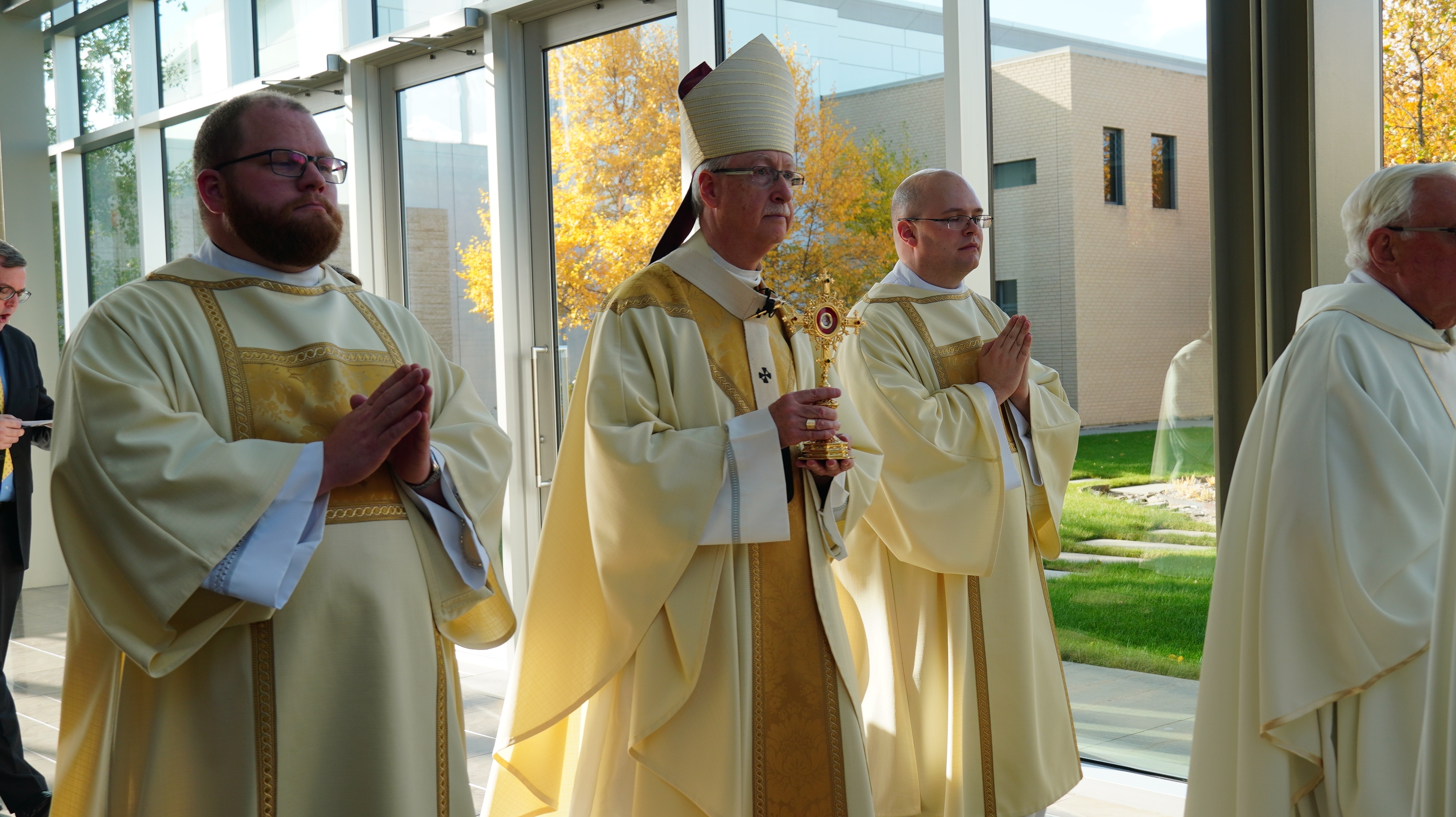 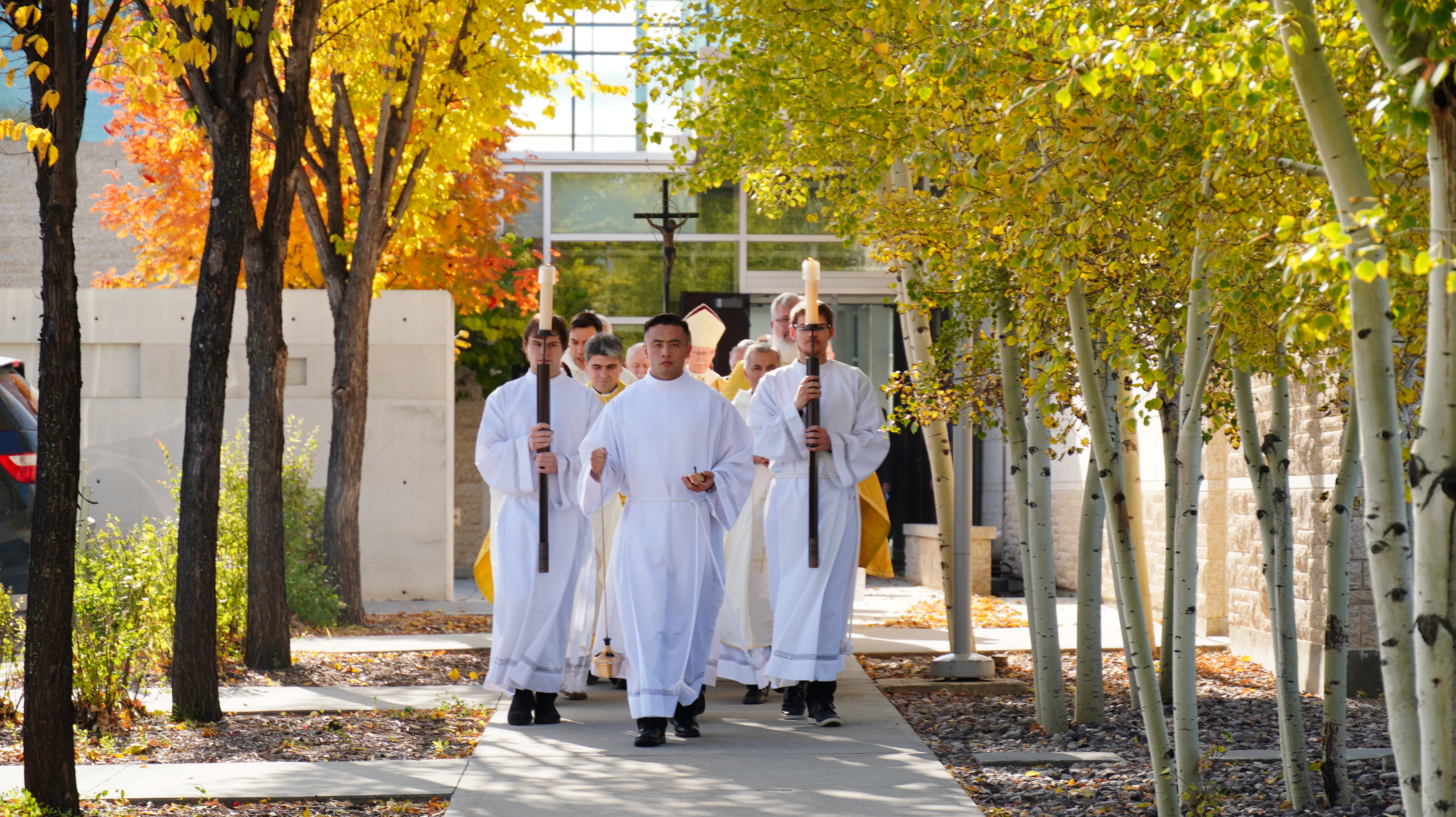 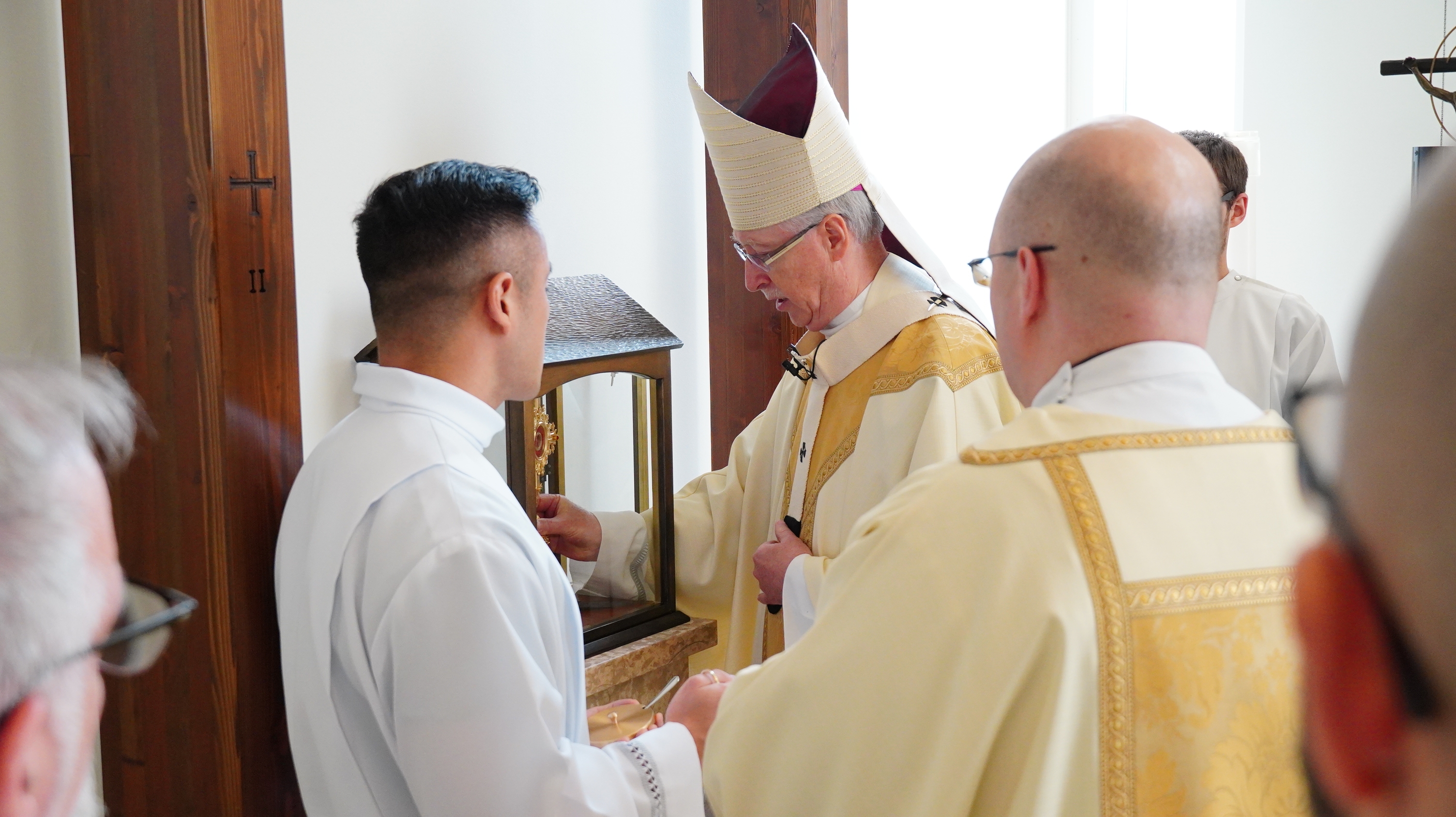 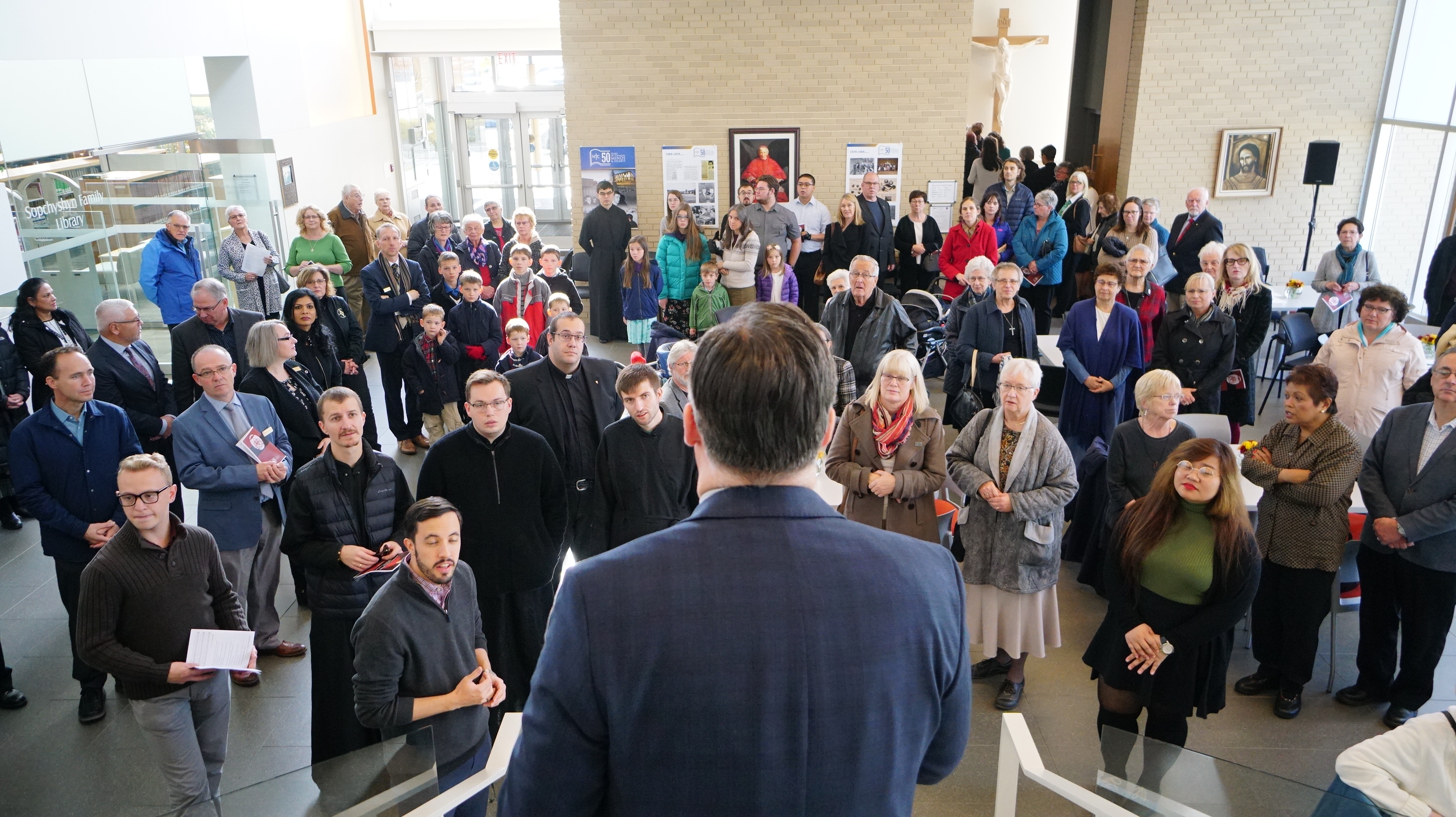 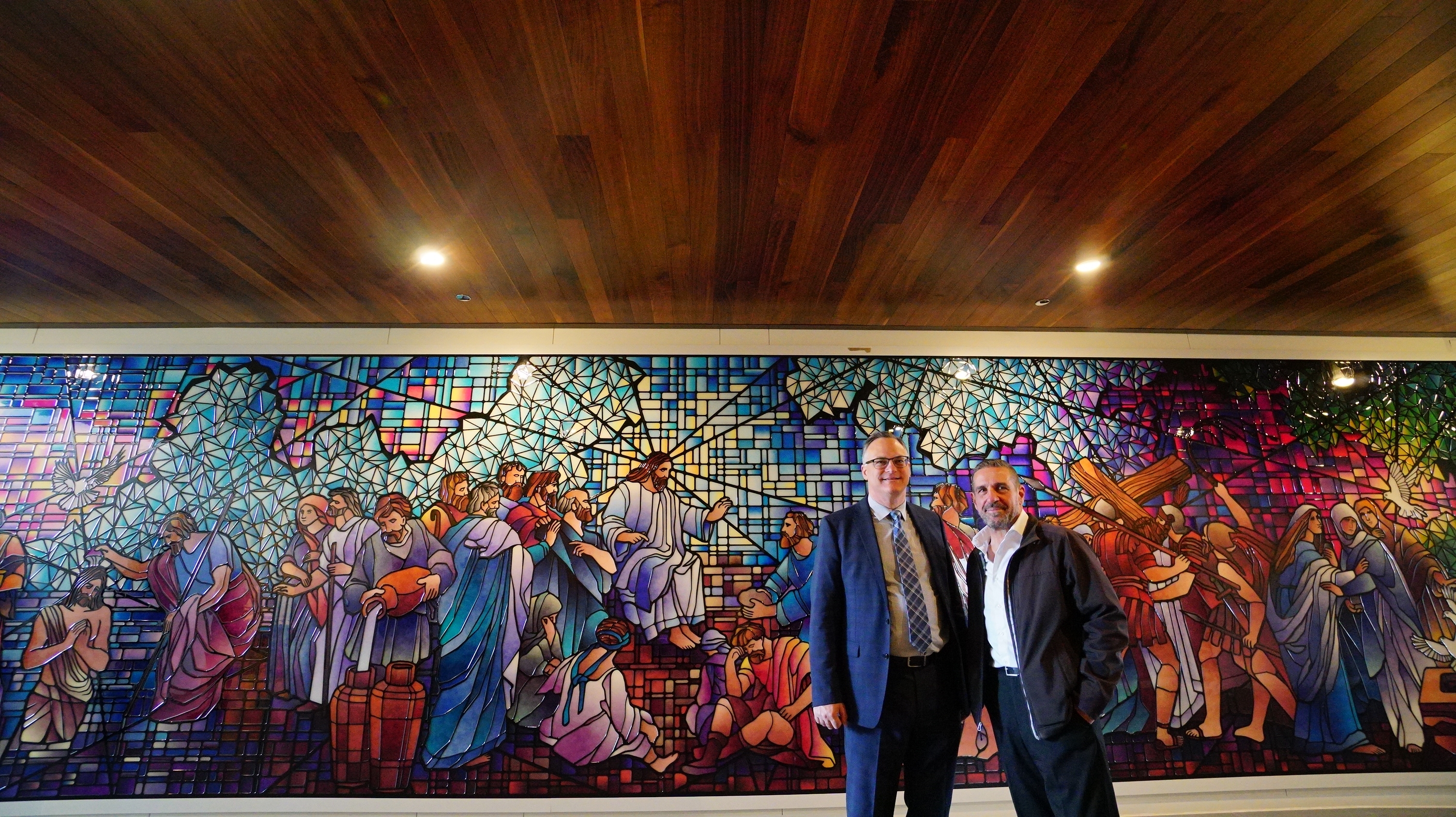 Newman Theological College President Jason West and art designer Bruno Enderlin were both pleased to present the new artwork on display at the college. 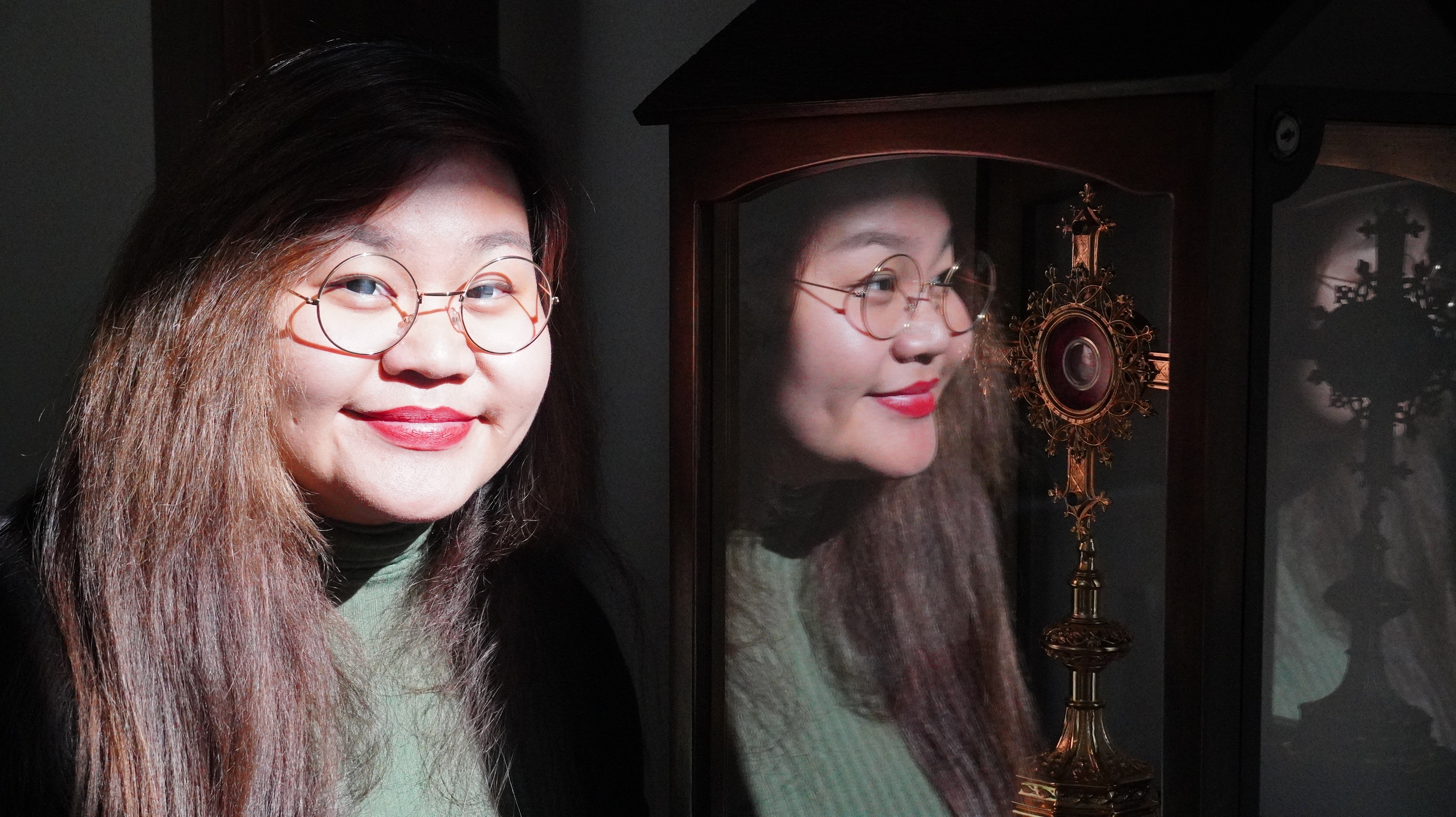 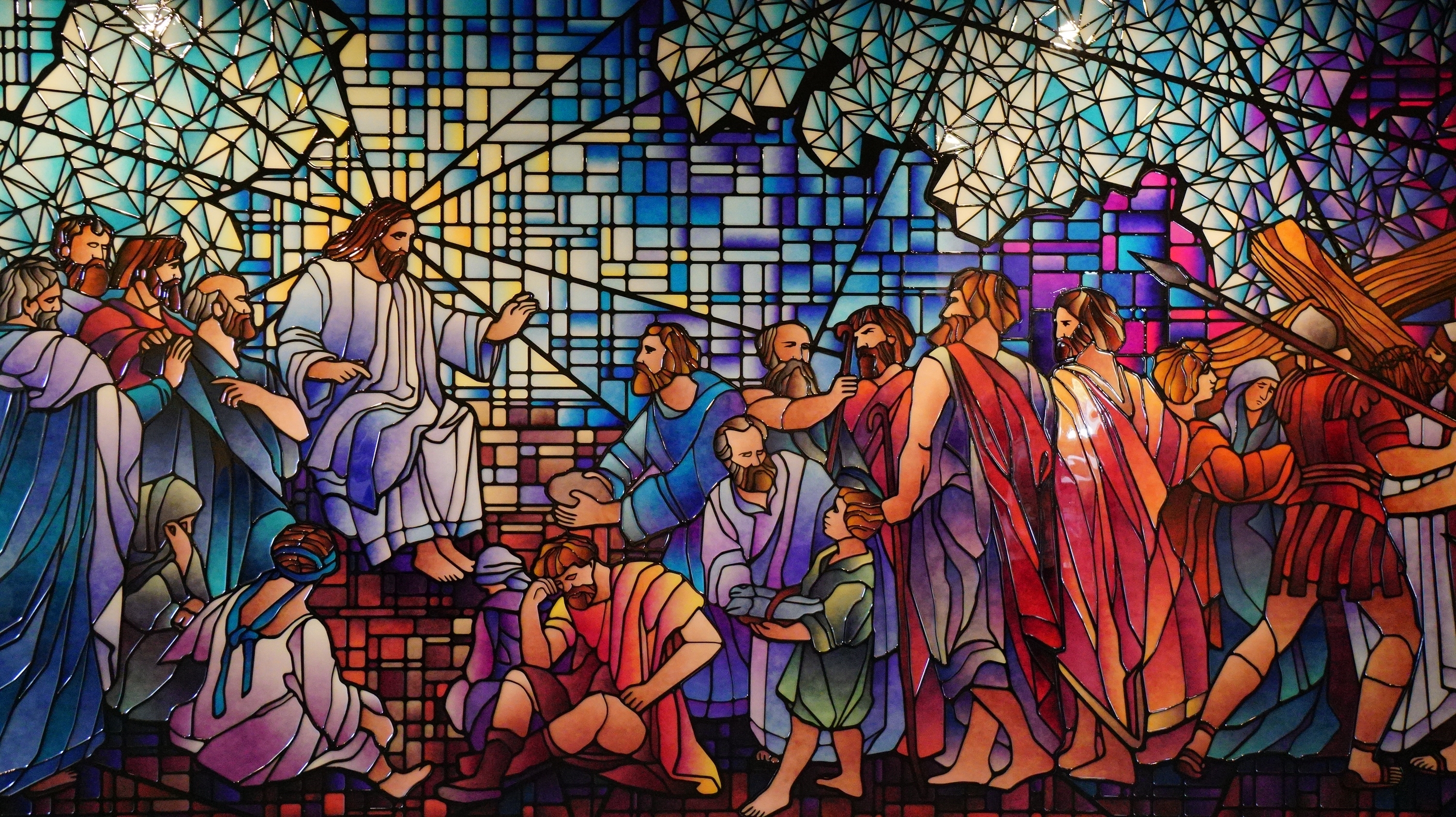 The new art piece unveiled at Newman Theological College shows a variety of events from life of Jesus Christ. 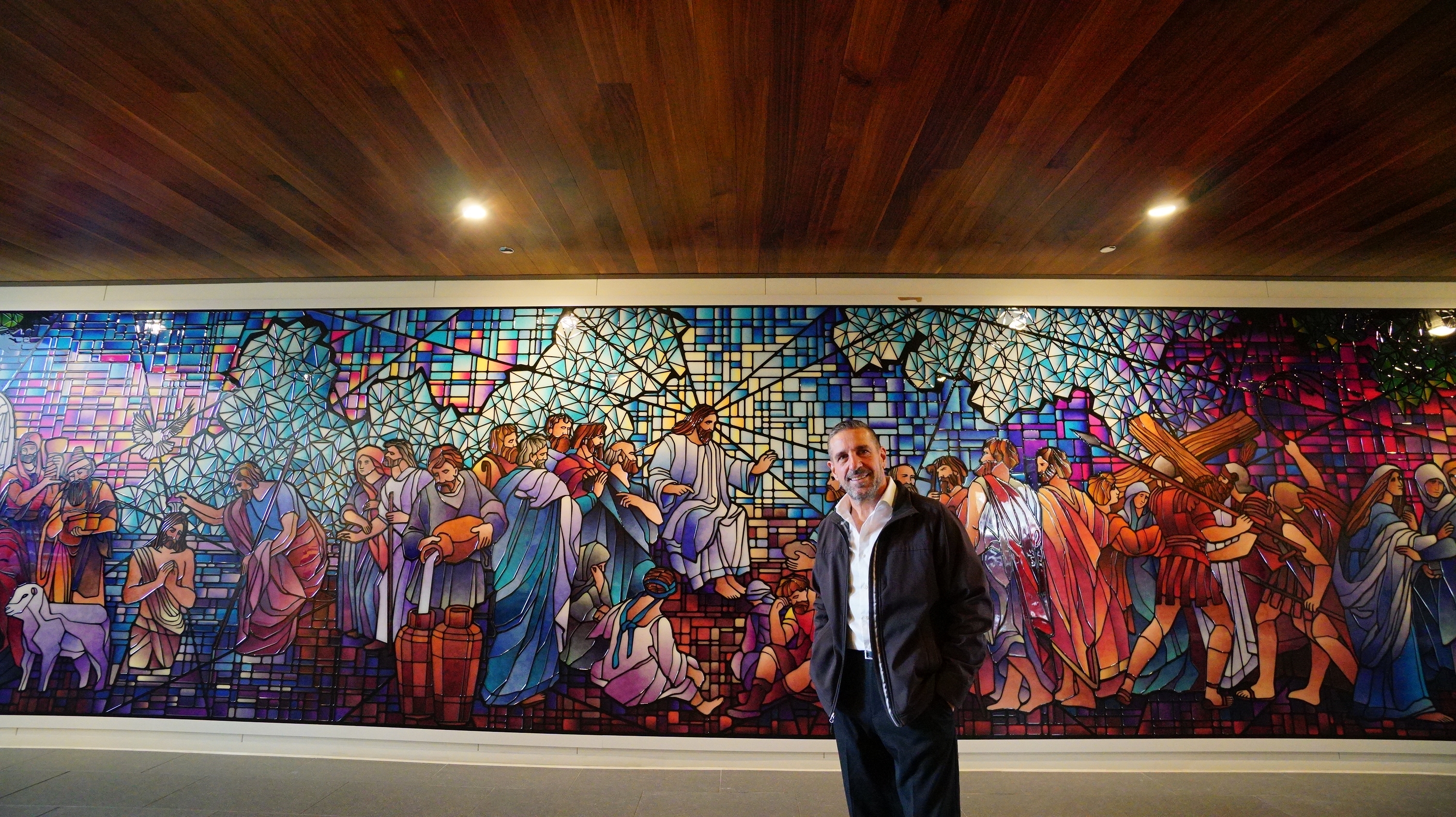 That message resonated with Jamela Camat, a first-year student at Newman Theological College.

“It felt like the Archbishop was speaking to every individual in his homily,” said Camat, who is studying for a Master of Theological Studies degree. “Learning to conform ourselves to God’s will can be difficult, but it also brings that serenity that we are all striving towards.

“Having that relic definitely brings to mind that we are all potential saints. It’s not this faraway goal that only the very few holy can achieve. Anyone can strive to conform themselves to Christ and live in that holy manner as well.”

Along with the relic, a new mural was unveiled in the main hallway of the college. The 12-metre by 3-metre artwork shows Christ’s life from the Nativity through his public ministry and his Crucifixion.

Designer Bruno Enderlin spent over six months working on the mural, created in a stained glass style with cut pieces of metal that are painted with resin. He found the work so inspiring he hopes to produce more religious art in the future.

“I feel like I’ve gained a lot spirituality by doing it, like I know why I’ve been given this talent,” said Enderlin. “I’ve not really done this kind of work as much, but now that I started I am hooked. I want to do religious art from here on out.”

Newman’s feast day will likely become an even bigger event for the college in years to come.

“Certainly on the eve of his canonization, this is a more powerful and exciting moment for the college,” said Jason West, college president. “We usually have a Mass on Newman’s feast day, but it was typically more low-key. When he becomes a saint, his feast day really becomes a celebration for the whole Church. I suspect we will be making this a new tradition after today and highlight his feast day more prominently in the future.”

Priests get creative as they find new ways to reach faithful 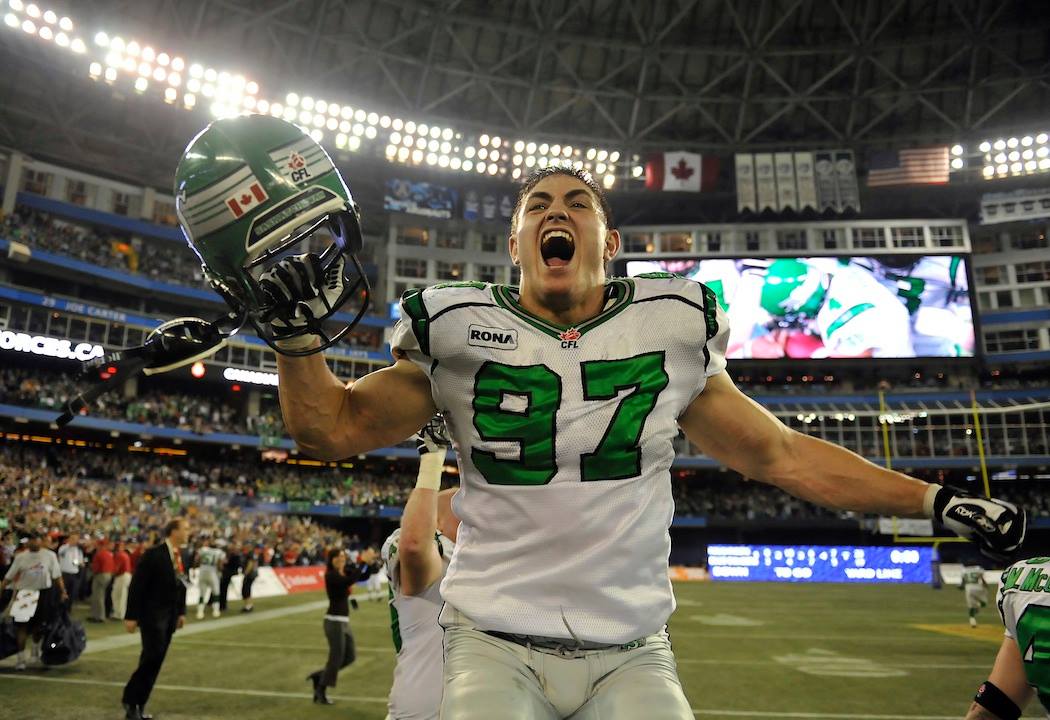 Faith guides CFL legend John Chick on and off the field