Skip to content
Candles are set up as part of a Humboldt bus crash memorial at St. Albert Catholic High School. Two of the victims are school alumni.Lincoln Ho, Grandin Media

The signs of mourning are everywhere for the lives lost in the Humboldt Broncos bus crash.

Students and staff at St. Albert Catholic High School wore sports jerseys and gathered at a small memorial with a photo depicting three young Broncos players. Two of them — Logan Hunter and Stephen Wack — were school alumni who died in the crash. 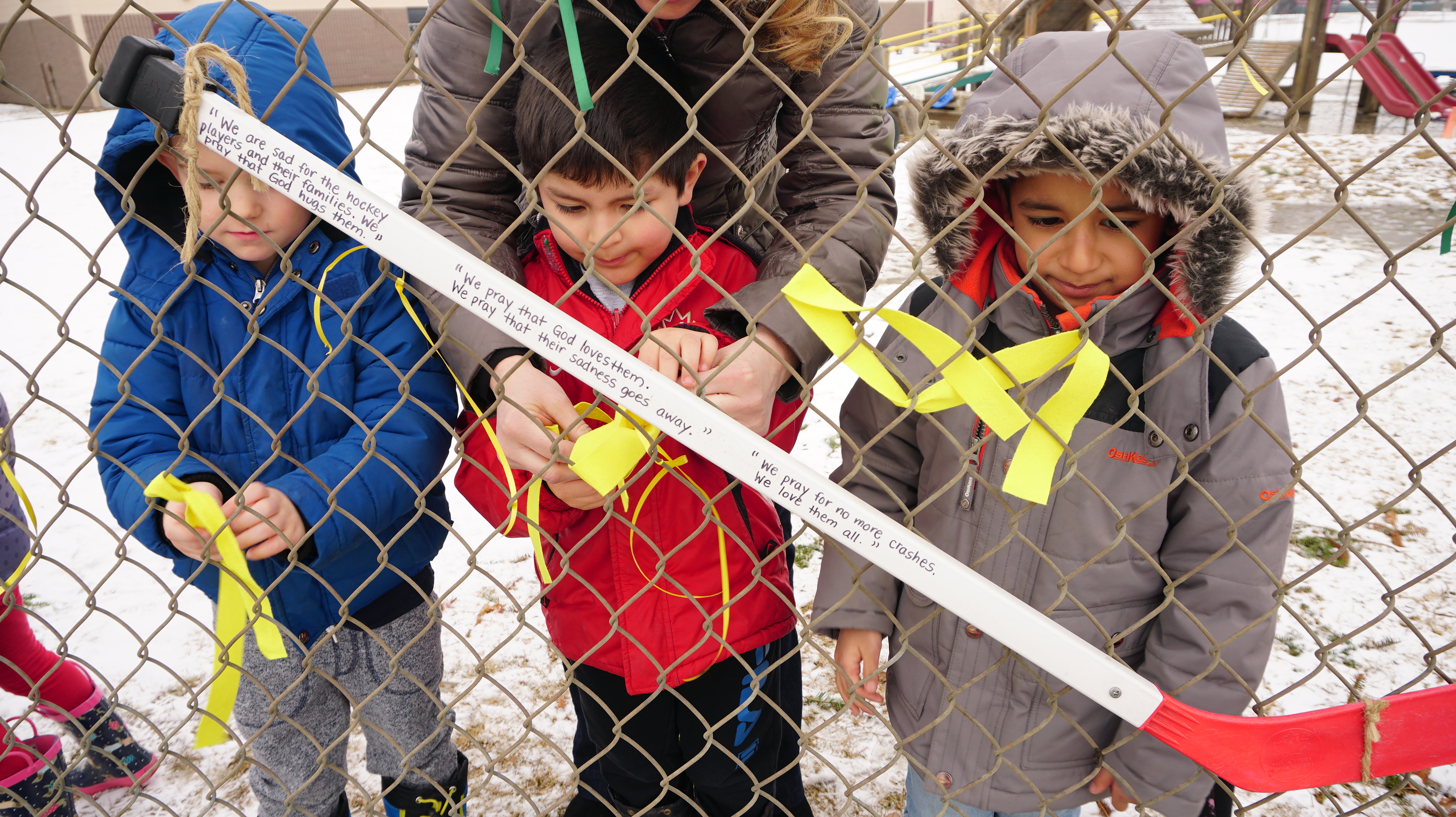 Students aged 3-4 from the 100 Voices class at St. Monica’s Catholic Elementary School tie yellow ribbons by a fence with a hockey stick written with their prayers. 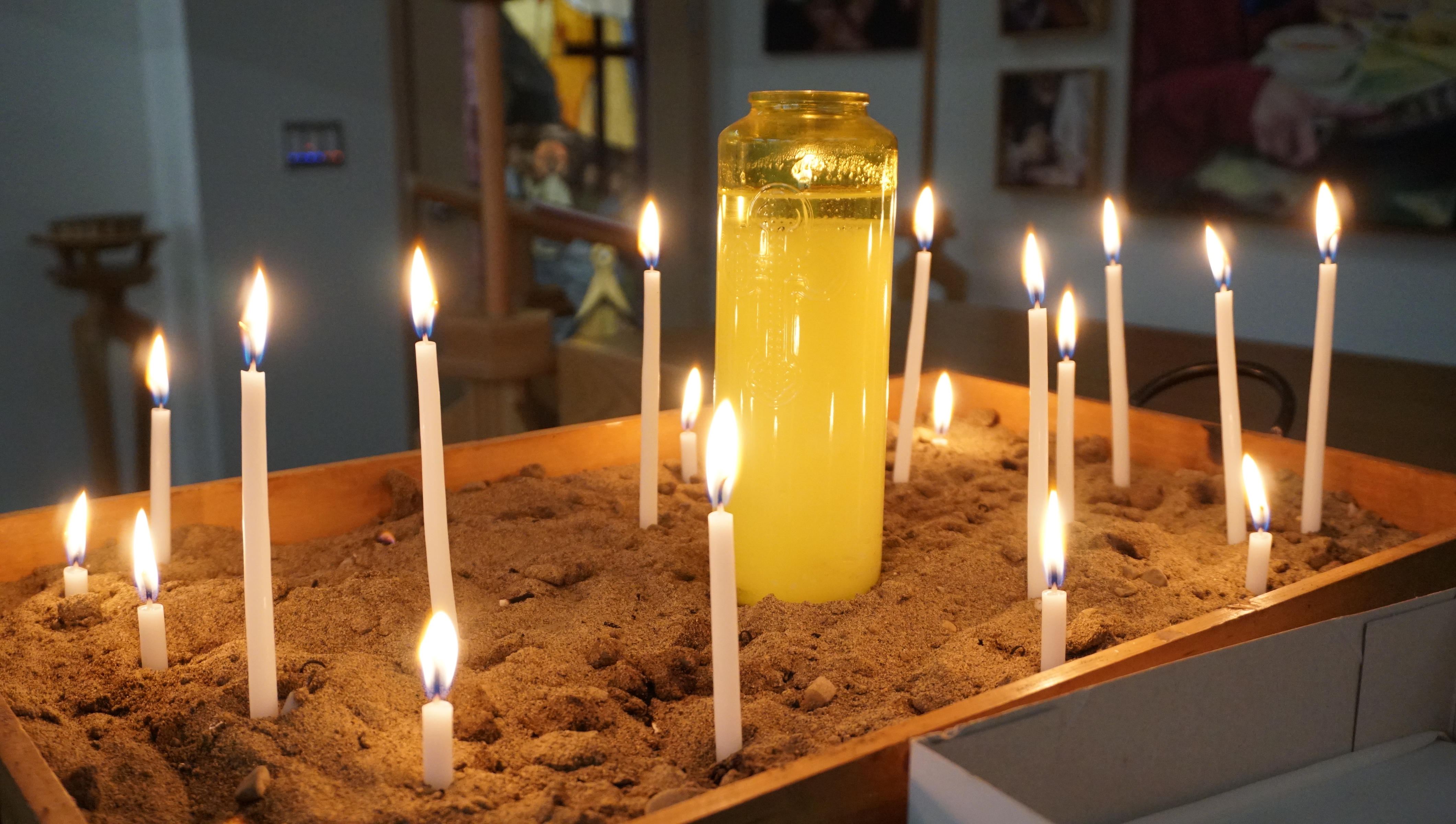 Candles set up in the chapel at St. Albert Catholic High School 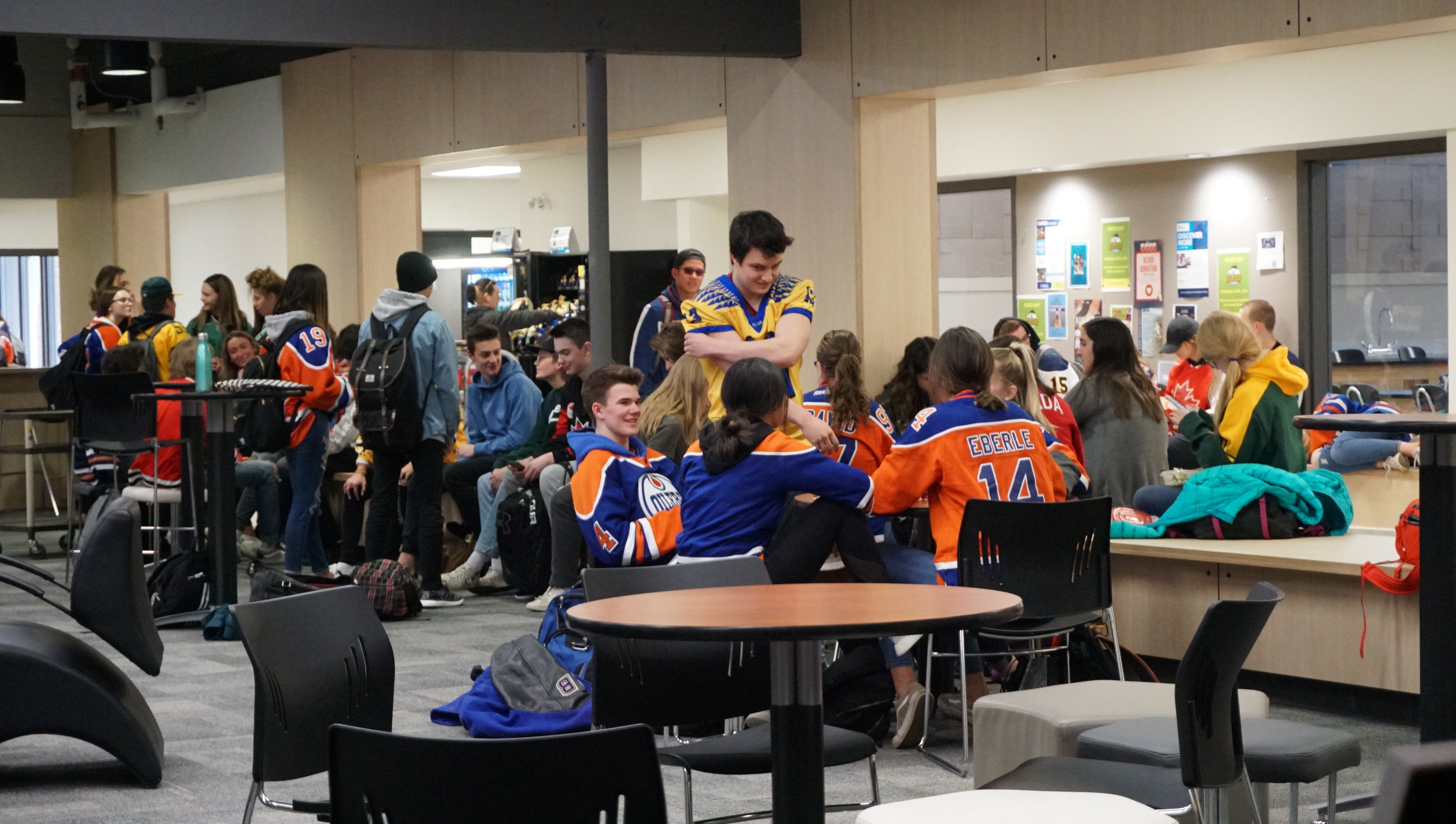 Students at lunch wearing jerseys in memory of the Broncos crash victims. 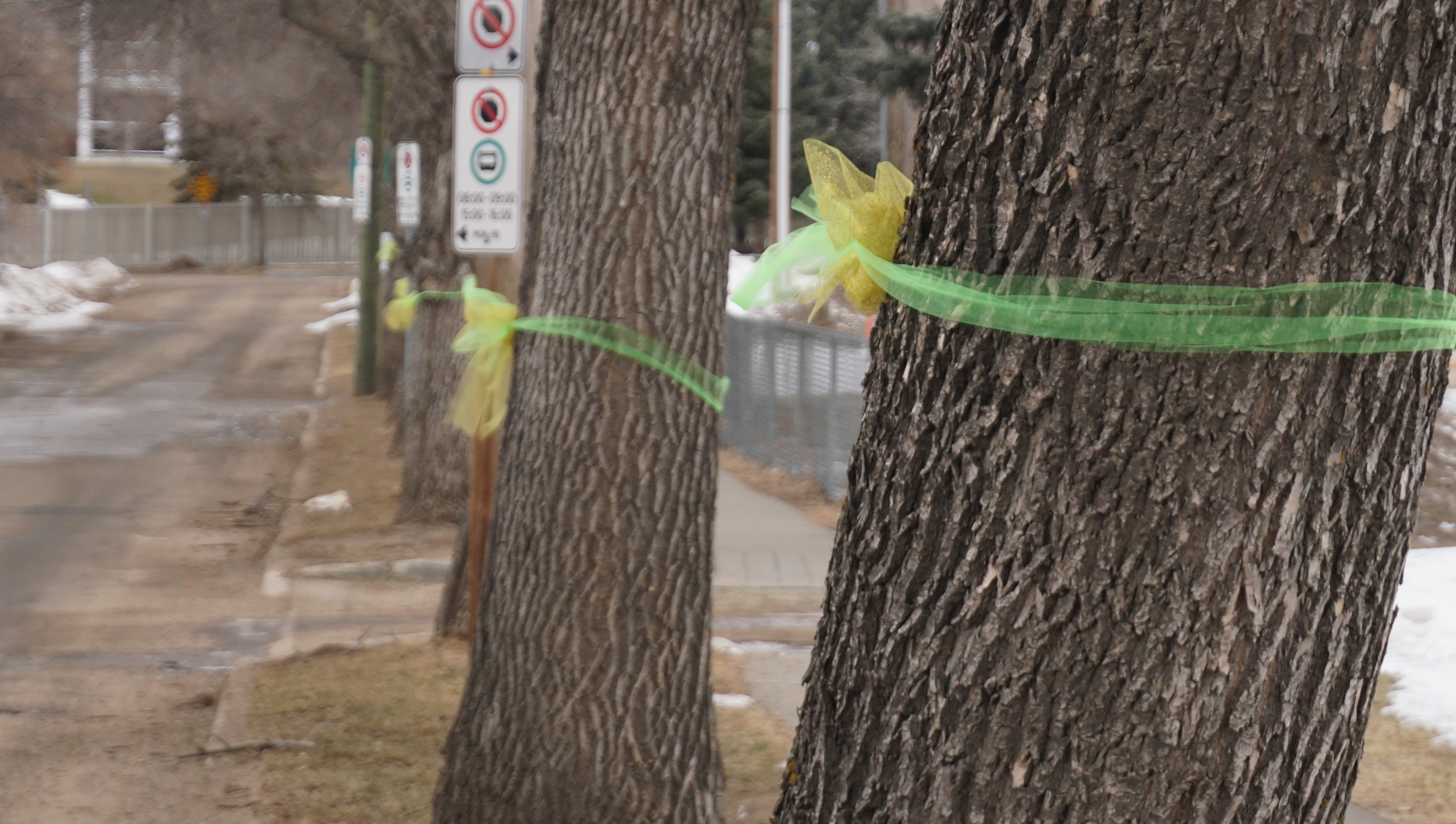 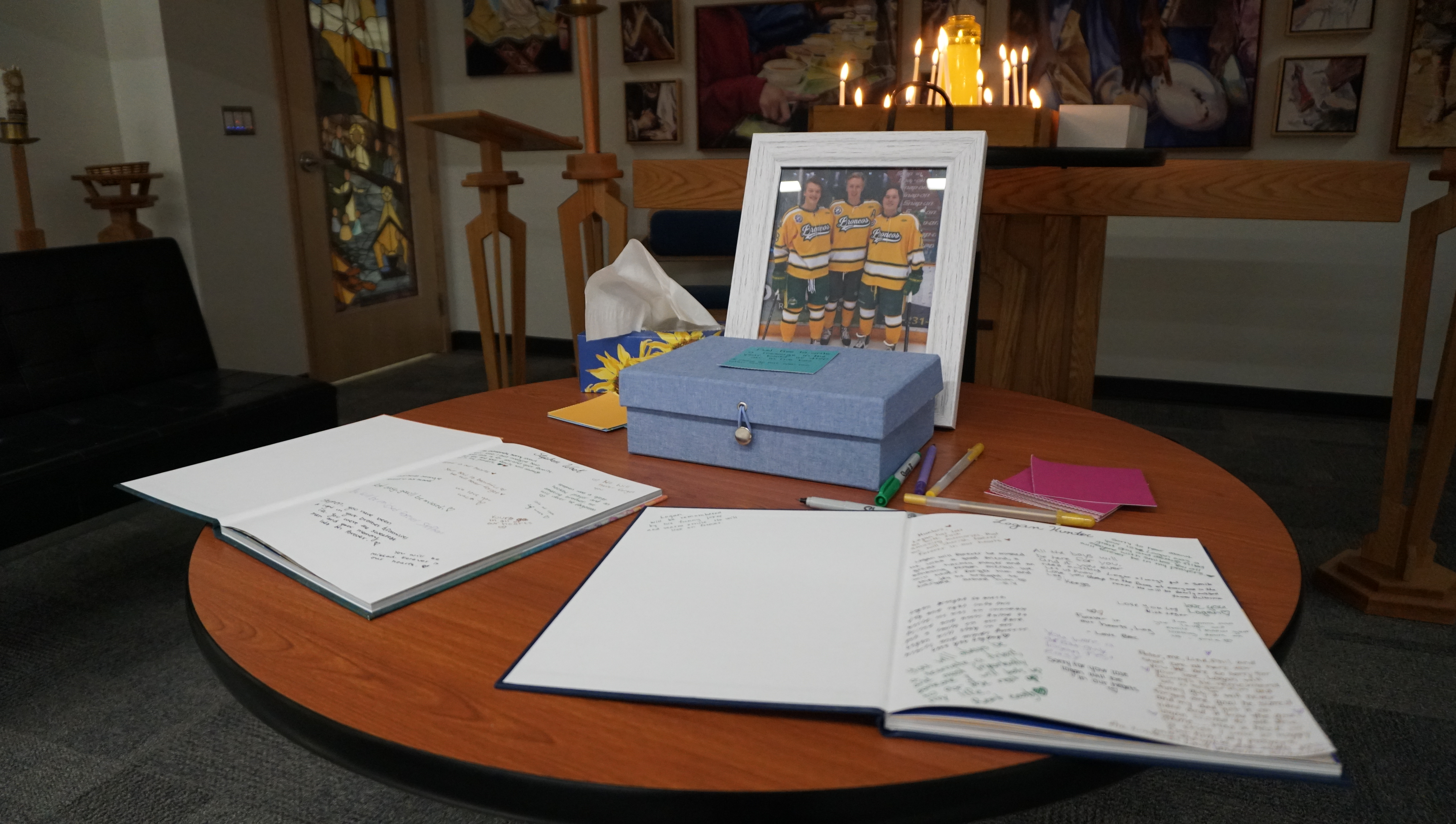 Photo of crash victims from St. Albert Catholic High School, with a box of prayers, and a yearbook signed by students for the families. 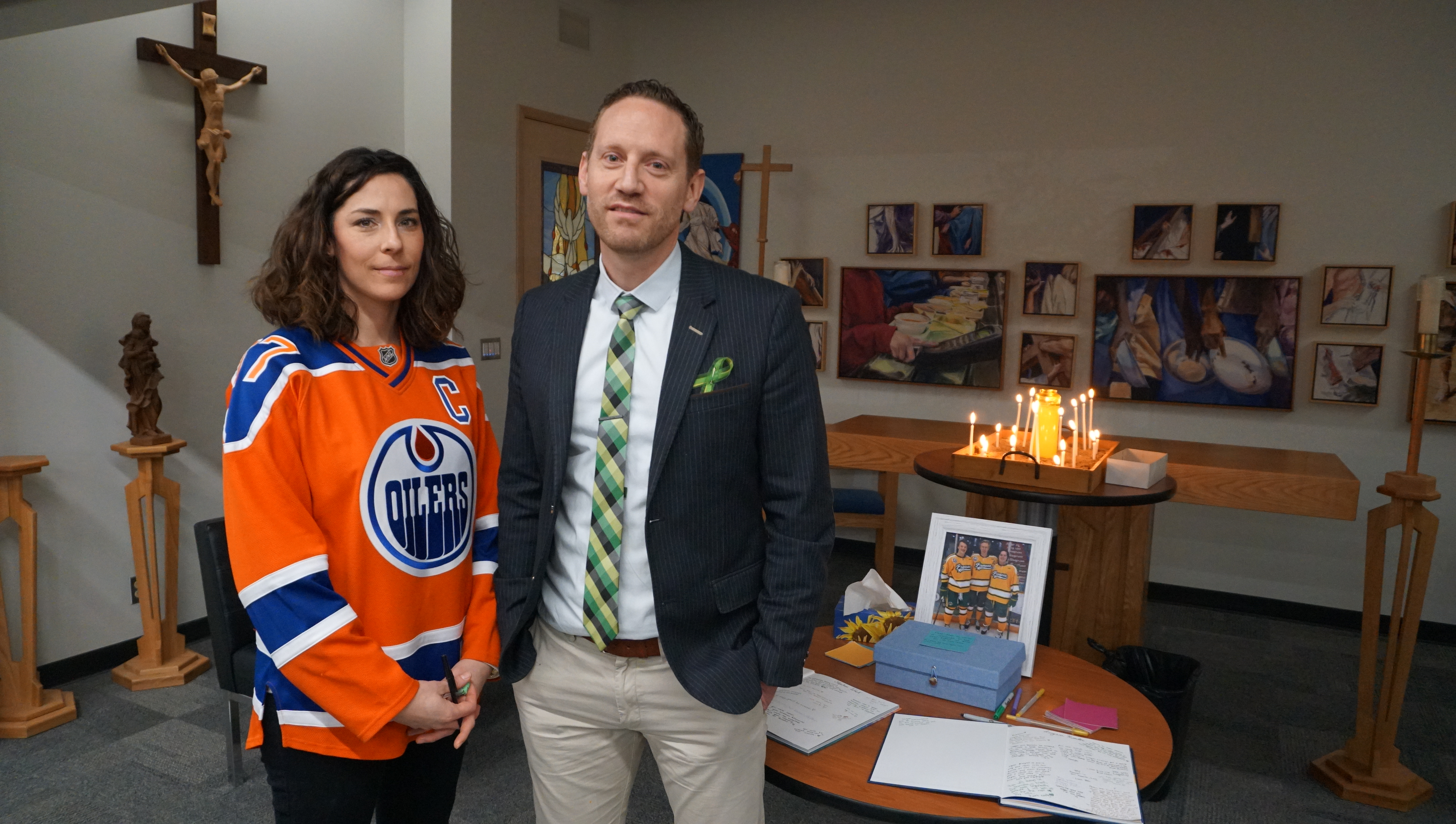 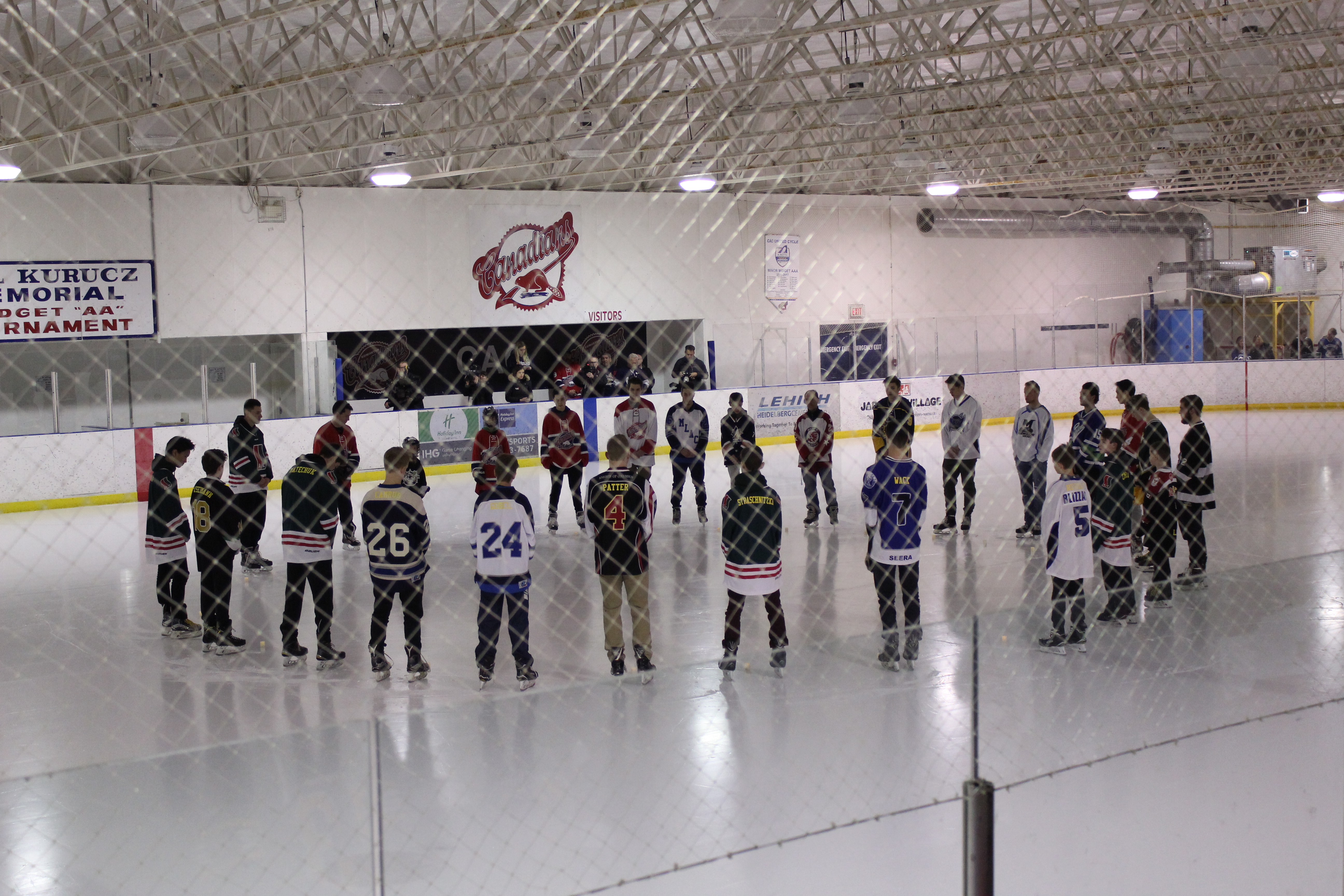 Twenty-nine kids representing each victim in the crash. 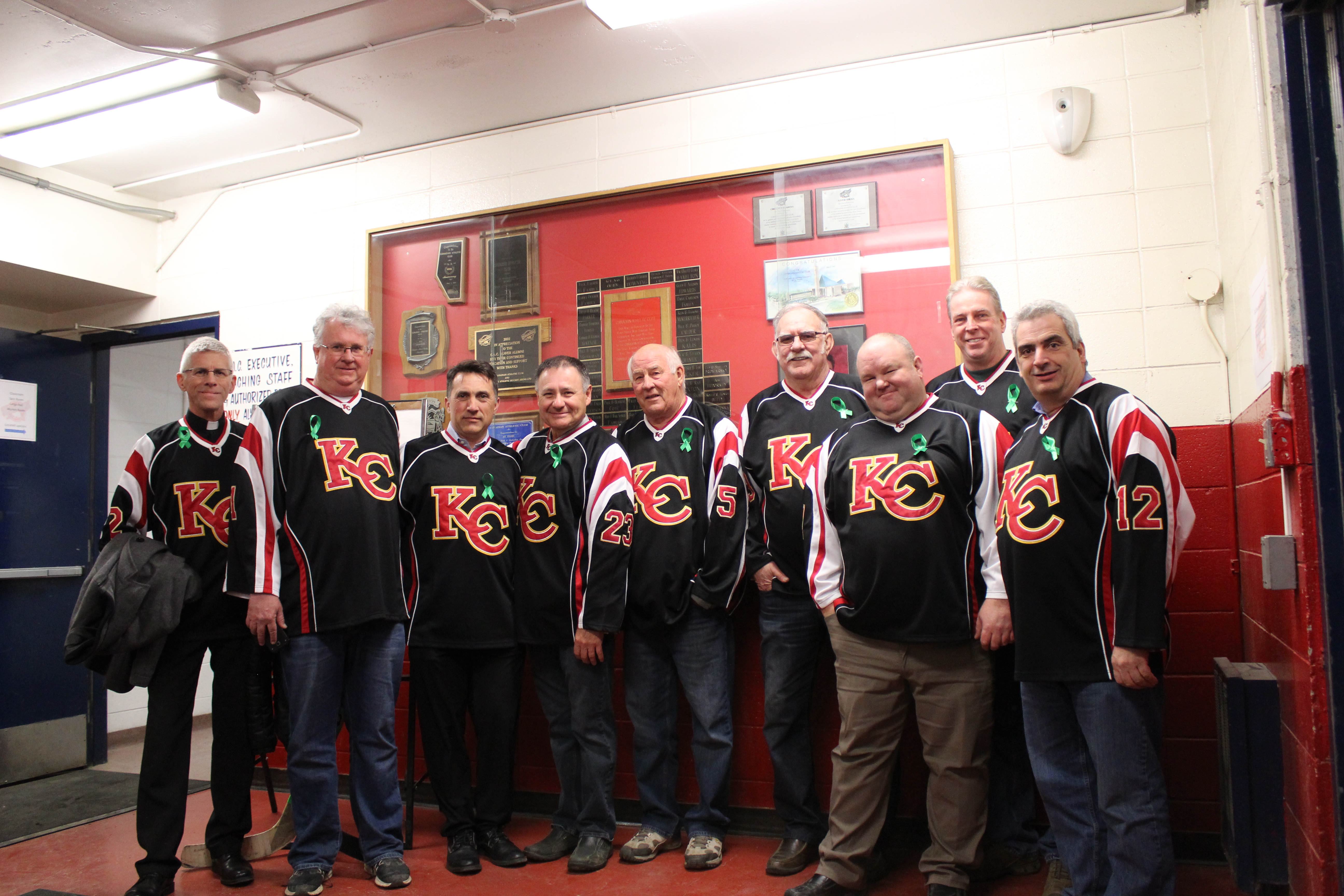 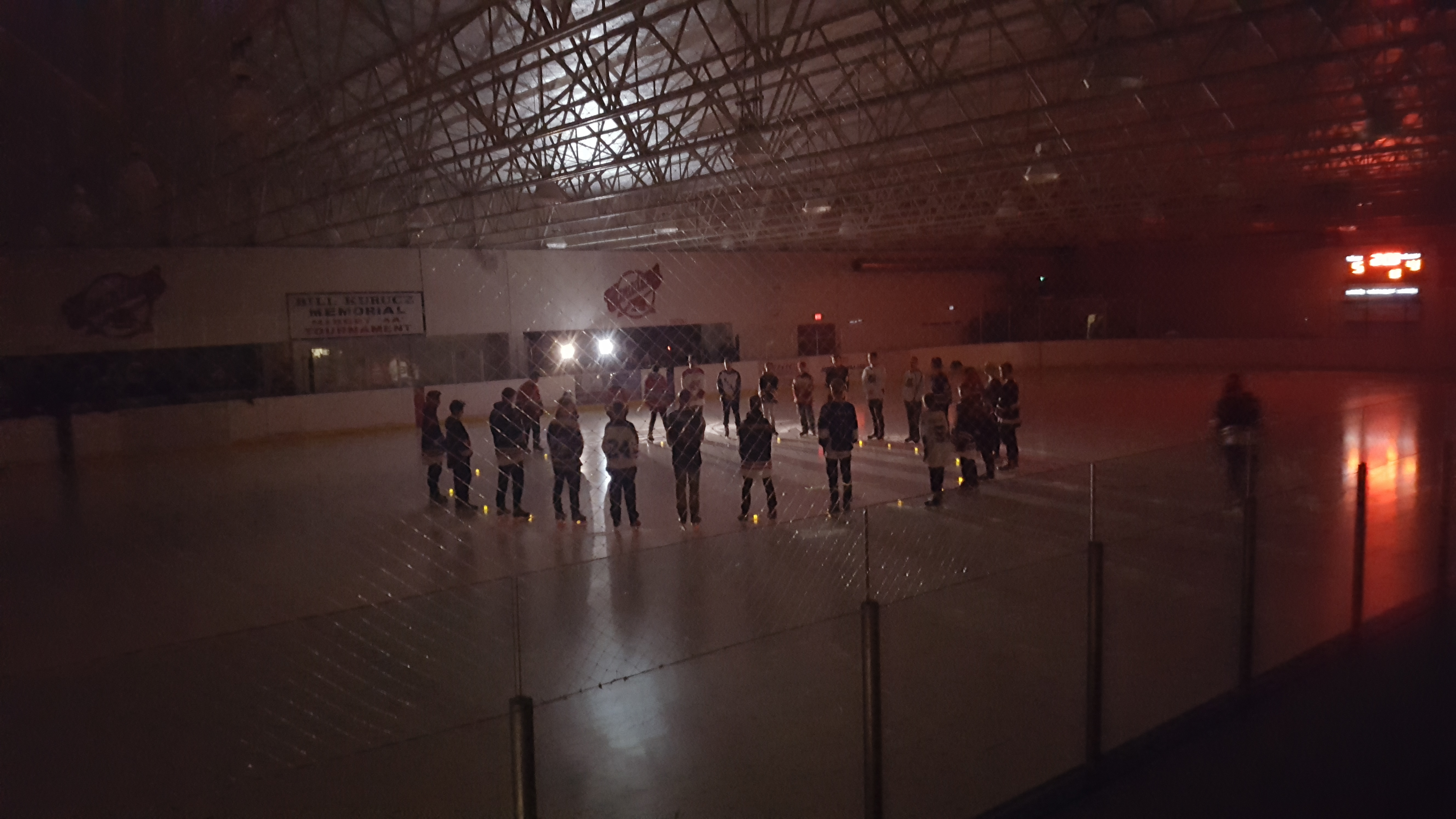 A moment of silence as the lights are turned off.

Over at the Canadian Athletics Club arena in Edmonton, dozens of young hockey players set aside competition to unite in grief at a vigil for the Broncos team. Twenty-nine electric candles — one for each Broncos team member involved in the crash — were placed in a circle at centre ice.

These were some of the ways the Catholic community rallied for the Broncos.
The team bus collided with a transport truck April 6, leaving 16 dead, 13 injured, and a nation changed forever. A GoFundMe page for the victims has raised more than $10 million. A public memorial for the four Broncos players from the Edmonton area is planned for April 17 at Rogers Place

But in private, and in local communities, the grieving continues.

“You think you’re doing OK, and then you open your phone and it’s all there again, so I think it’s really, really hard,” said Kacey Jost, who graduated from St. Albert Catholic High School with Logan Hunter.

“As teenagers we feel so at a loss for why this would happen for people,” Jost said. “We feel that we are unbeatable. We are kids, we have the whole world ahead of us. Even right now we don’t understand it completely.”

Students signed yearbooks from the graduating year of each Broncos player, which will be sent to their families. And school staff are helping them cope with their grief.

“We have a God with very big shoulders, and he can hear our anger as much as he can be with us in our joys,” said Colin Loiselle, a religious education consultant for the Greater St. Albert Catholic School district, who prayed with the students.

For some, the constant flood of stories about the crash has kept their wounds from healing.

“This has been so traumatic. I just hope everybody finds peace, because this is something you never imagine to happen,” said Jost.

In the larger hockey family, young players and parents are also mourning.

“No one should have that experience. I have a lot of friends on my team, and I would be heartbroken if something were to happen to all of us,” said Cam March, 11, who attended the April 12th arena vigil with his dad and brother.

Cam’s dad, Chris, said it’s important for parents to be honest with kids about the tragedy.

“It’s important for them to know that the community needs support. It’s through that support that the hockey community gets through things like this.”

The organizers of the vigil, Hockey Canada and the Canadian Athletics Club, plan to forward donations and jerseys to the Humboldt families.

For Bruce Fitzpatrick, president of the Knights of Columbus Hockey Club, the Humboldt tragedy hits close to home.

“Our kids in our club would have competed against these kids over the years,” said Fitzpatrick, who attended the vigil with his Knights of Columbus council. “You’re not supposed to have your children pass before you; that’s not the natural progression of things.”

Deacon Joseph Leuwer, a Knight and a former hockey player, said the Knights came to bring a faith perspective to the memorial, which he described as a natural response to tragedy.

“We as a community pray for those that are suffering anywhere in the world. It’s a natural way for us to try to extend our arms around this community,” said Leuwer, noting that suffering is an inescapable part of life.

“I think of it as the way of the Cross,” said Leuwer, drawing a parallel with the Catholic devotional that marks Jesus’ last hours before his crucifixion.

“Our faith is central to our way of seeing the world. We all find ourselves or someone that we love at a ‘Station of the Cross,’ figuratively speaking. It is part of the life experience, and so we need to respond to that.” 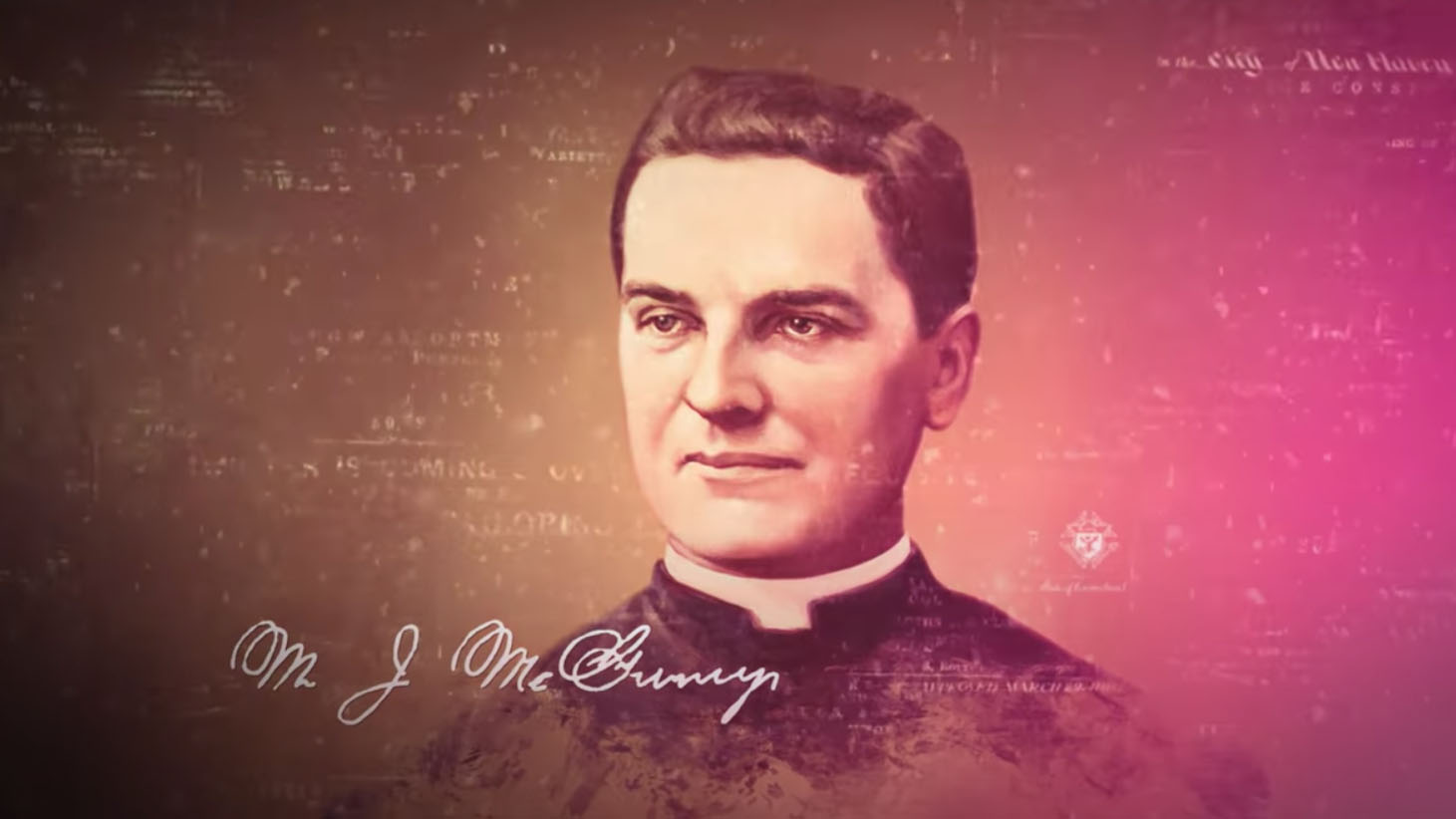