Skip to content
Participants joined together in a solidarity walk to end the Social Justice Institute conference on “Welcoming Refugees and Migrants,” held at Newman Theological College on May 4. Kyle Greenham, Grandin Media

Nora Alsaka Amini can still recall the horrors of her final months in Syria.

Speaking at a workshop at Newman Theological College, Amini restrained her emotions as she related memories of stepping over dead bodies after a night of air strikes and bombings. At that time she was pregnant with her second child, making the sight of corpses in the streets even more traumatic.

Today, she has made a new life for herself in Edmonton. Since successfully applying for refugee status and arriving in November 2016, Amini and her husband, Fadi Orfali, have purchased a home, and Amini is studying to be a dental assistant.

But one barrier remains in the way of her full integration with Canadian society — the thought of her parents still living in Syria.

“I am hit with a very difficult depression having left my parents,” said Amini, who hopes they will someday find a way to come to Canada. “My sponsors here in Canada have given me everything. I feel like I’ll never need anything else — except for my parents.”

The challenges of integration were a main theme during the Social Justice Institute on “Welcoming Refugees and Migrants,” held at Newman on May 4.

Winnie Yeung, the day’s keynote speaker, came face to face with that issue when she met student Abu Bakr al Rebeeah. By encouraging Abu Bakr to tell his story — facing the violence of Syria’s civil war as a 12-year-old boy and then coming to Edmonton as a refugee — the pair wrote the now best-selling book Homes: A Refugee Story.

Originally from Basra, Iraq, Abu Bakr’s family moved to Homs, Syria, shortly before the civil war in Syria began in 2011. When rebel groups like ISIL brought the violent conflict to Homs, the family applied for asylum in Canada. They successfully moved to Edmonton in 2015.

But Abu Bakr found it challenging to adapt to life at his new school, Highlands Junior High. Because of the experiences of war and violence he had lived through, he worried that he would not be recognized as a normal kid by his other classmates.

Yeung says offering a way for Abu Bakr to retell his experience gave him the permission to feel accepted in his new Canadian home.

“Refugees losing their own community and wanting to be a part of this community — we need to recognize how difficult that process can be,” Yeung said. “The best gift we can give is to listen unimpeded. By creating a safe and accepting space for them to tell their stories, maybe it will help ease that difficulty.”

Abu Bakr says the main message he hopes to send through Homes is how much he has in common with his fellow Canadians.

Winnie Yeung, the day’s keynote speaker, encouraged Abu Bakr to tell his story of facing the violence of Syria’s civil war as a 12-year-old, then coming to Edmonton as a refugee. The pair wrote the now best-selling book Homes: A Refugee Story.

“I hope people come to see how similar we are as persons,” he said. “They don’t know much about back home; all they think about is the war and the violence that is happening over there. When I first came to Canada, I got questions like ‘Do you guys even have schools in Syria?’

“But people there are still happy; it’s not all about violence. We went through wars, massacres, but still we had happy days back in Syria and Iraq.”

Yeung agrees that this was a common concern Abu Bakr brought up during the writing of Homes.

“He lost a part of his identity because of his refugee status, when he just wanted people to see that he’s just like them and he can play and joke around with the other students,” Yeung said. “He is not defined by his trauma, and the more people understand that, the more they can see refugees for who they really are.

“I’m happy to honour Abu Bakr’s wish to tell this story and reveal that he’s just a regular kid.”

Now, Abu Bakr has not only fully settled into Edmonton; the success of Homes has brought him onto various television programs and publications across the world. When he tells his cousins back home about that, they find it hard to believe.

“I never imagined the book would go as far as it did,” he said. “I feel like I’ve done something for everyone back home. I’ve helped people understand what’s really going on there.”

The Social Justice Institute focused largely on ways faith communities can play an active role in welcoming and integrating refugees and migrants. While not everyone can write a best-selling book like Yeung and Abu Bakr did, speakers also detailed ways that everyday churchgoers can play a part.

“It’s a very urgent topic in society today, and the Church has always been integrally involved in the entire history of refugee settlement to Canada,” said organizer Bob McKeon. “A lot of today’s conversation is about digging deep into our faith traditions, and how we play a part in the Church’s commitment to being charitable.”

Donna Entz of the Mennonite Centre for Newcomers (EMCN) has worked with a variety of refugees and migrant groups in Edmonton. Many refugees who come from deeply religious societies find Canada is a place where faith is often kept out of the public sphere, she says, and isolation is a common result.

“One thing we find is that they don’t feel safe in secular Canada,” she said. “When they come to our society, it can be a struggle to find any overlap. There’s language barriers, religious barriers, ethnic and racial barriers. I’ve taught English to a lot of immigrants, and I’ve found that once people realize you’re a person of faith and they can talk to you openly about their faith — suddenly they are much more at ease.

According to Entz, many second and third-generation immigrants become isolated from their communities and their families, often due to the declining role religious faith plays in their lives in comparison with those of their parents. Particularly with Somalian communities, this isolation can end in the person joining a gang as a way of finding that sense of belonging.

Bringing these people back to the faith of their parents can be the key in ending that isolation, she said.

“Somalian men are some of the most isolated men I’ve worked with in Edmonton. But I’ve seen that encouraging them to attend a mosque and build connections there has been really helpful.”

Yeung agrees. “For so many refugees, religion is central to their lives. Church can be the centrepiece for helping these people find their roots, especially in that beginning transition.”

Faith has also been a source of solace for Abu Bakr. Because of what he witnessed during a particularly harrowing moment at a mosque in Homs, the power of the Muslim faith is something that has been permanently ingrained in him.

“Once in Friday prayers, a shooting happened inside the mosque. We had no idea from where it started and I was really freaked out,” he told Grandin Media.

“I started looking around; I just wanted to run away. For me it was a very big deal … But the other people didn’t even move; they just kept on praying. I can never forget this moment.”

“The focus on their beliefs showed me personally how important religion and the faith is — that these people have a faith so strong that even a shooting cannot move them from their prayers.”

The Canadian government responded to the Syrian refugee crisis by resettling 25,035 Syrians between 2015 and 2016, according to Statistics Canada. 9,505 refugees came under private sponsorships during that period.

Ernie Oginsky is a member of St. Charles Parish in Edmonton, which sponsored a Syrian Christian family in November 2016. He understands first-hand the role faith can play in helping refugees integrate and feel welcome.

Although they come from an Orthodox background, members of the sponsored family regularly attend the Catholic Mass at St. Charles. They had to adjust to the differences in liturgy, but the Mass has been a comfort for them. It has helped them ensure they continue their strong Christian belief and practice.

“They definitely find St. Charles different, but they are adapting and getting accustomed to the Mass,” said Oginsky, who keeps in weekly contact with the family.

“I think they will find encouragement when I tell them some of the stories we heard today, that there are many refugees in this city who have successfully integrated.” 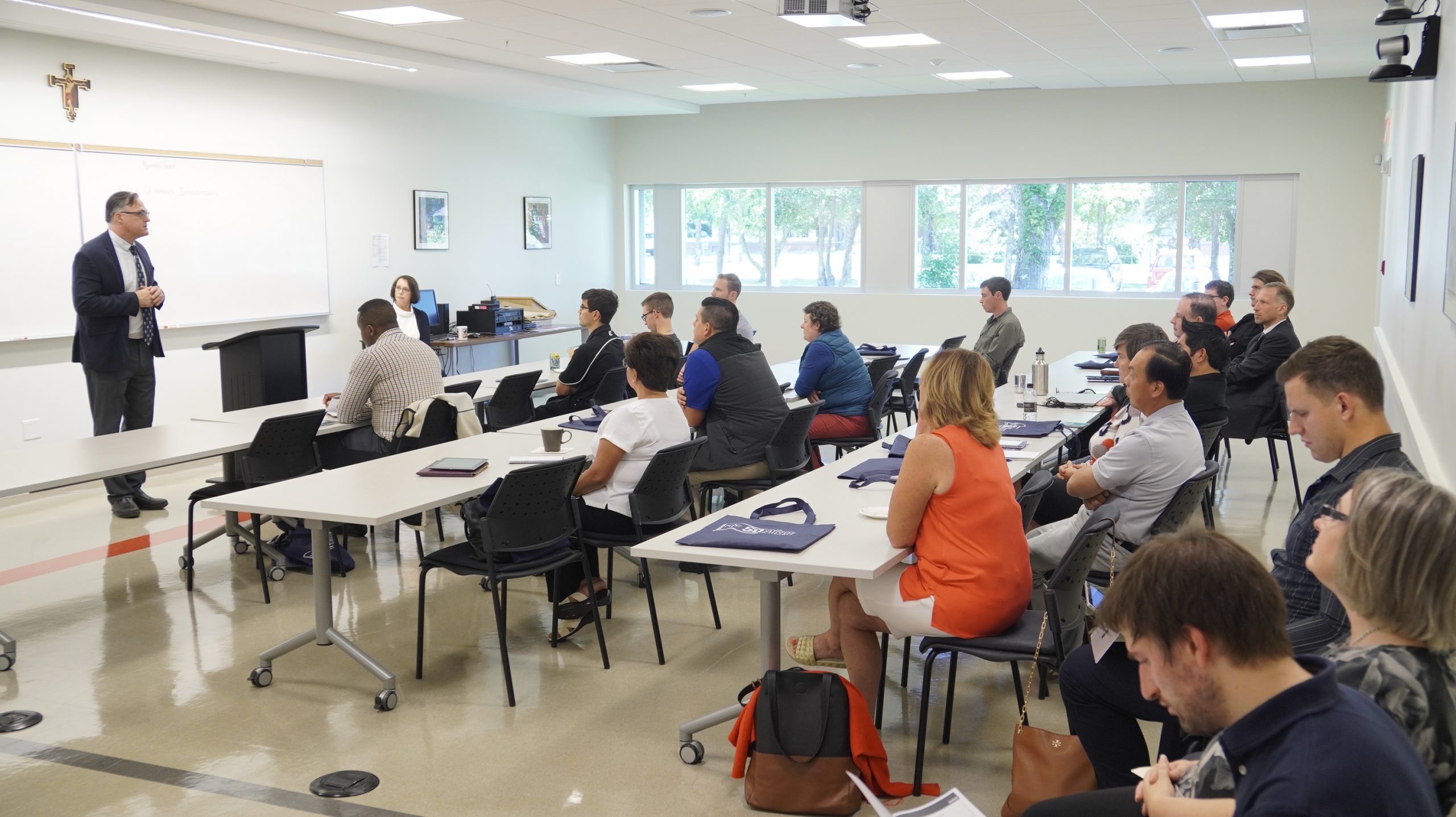 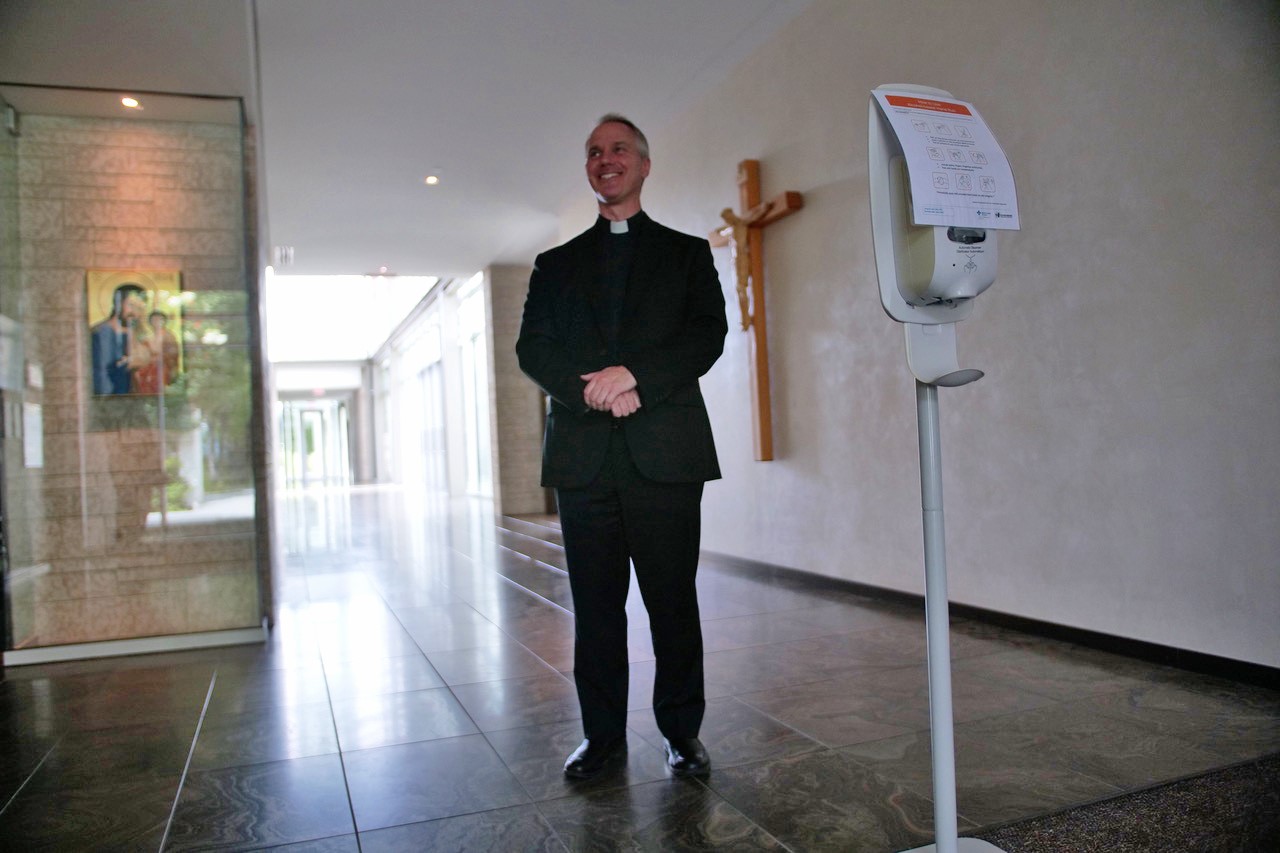 Seminarians return this fall to live in a community bubble