The photos tell the story of the Al-Khatyar family.

There are older ones of brothers Mark, now six, and nine-year-old Majd, on a tricycle they rode on the streets of Mosul, Iraq, their hometown north of the capital, Baghdad. Others show them beaming with their parents, Khalid Al-Khatyar and Noran Baba-Alloos. Another shows Khalid in the successful pharmacy he owned for years.

Then there are more disturbing photos. The ones that show the trashed and burned out shell of a building that used to be their home. It was destroyed in attack by supporters of the ISIS, the Islamic State of Iraq and Syria, after the terrorist group took over their city and homeland. 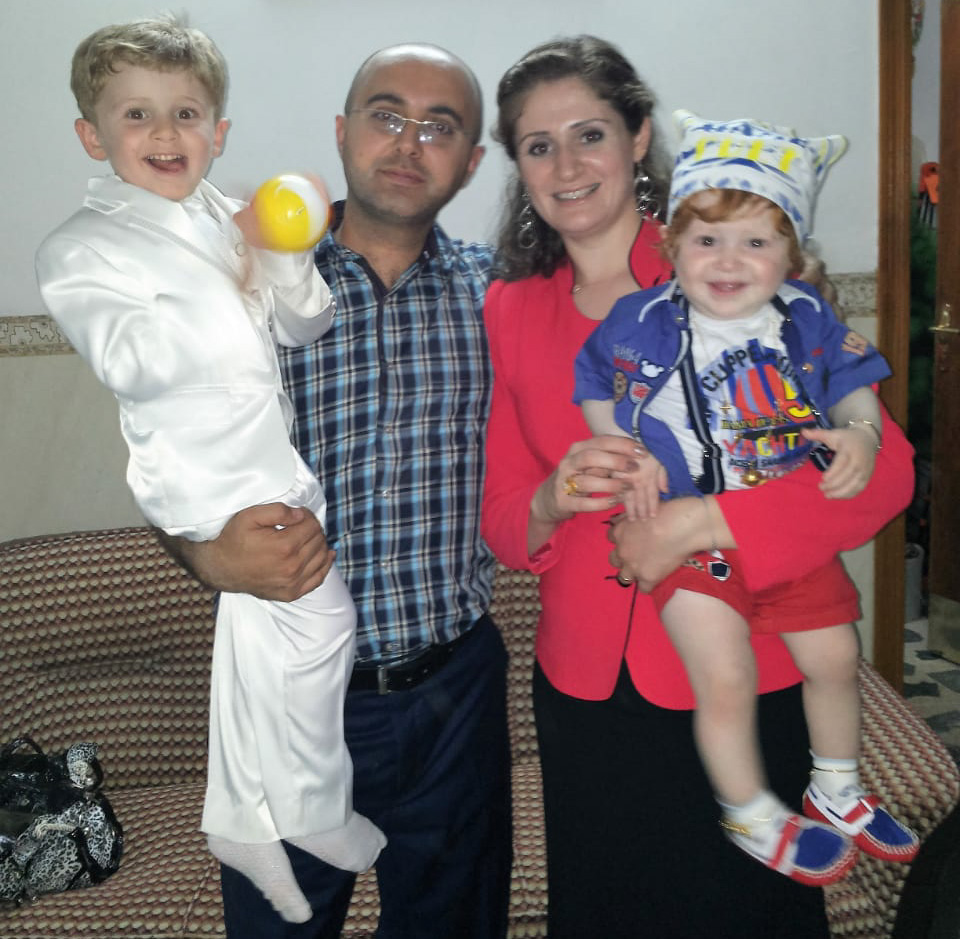 The al-Khatyars are seen in this family photo prior to the ISIS attack. 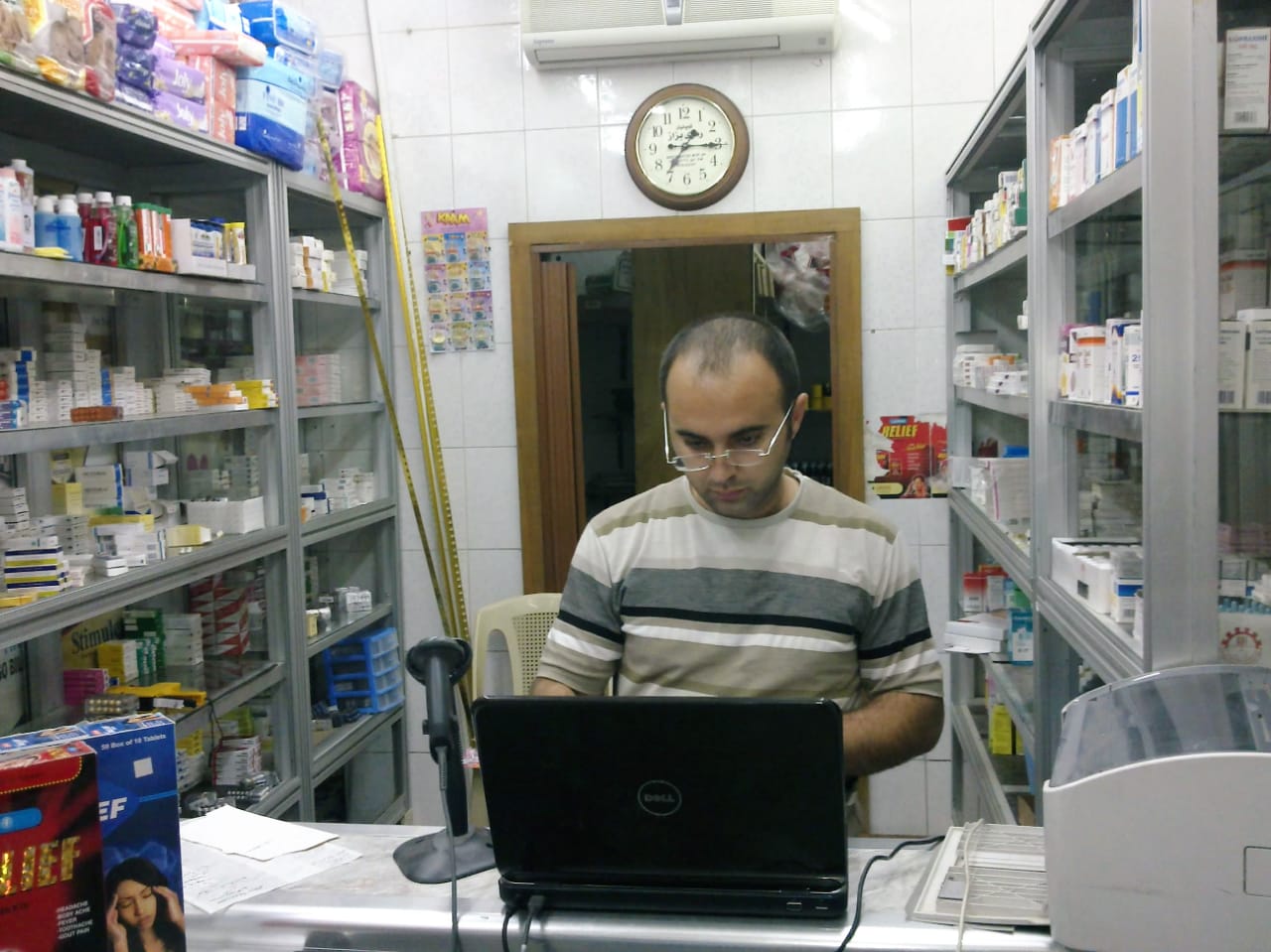 Khalid Al-Khatyar ran a successful pharmacy in Mosul prior to the ISIS attack. 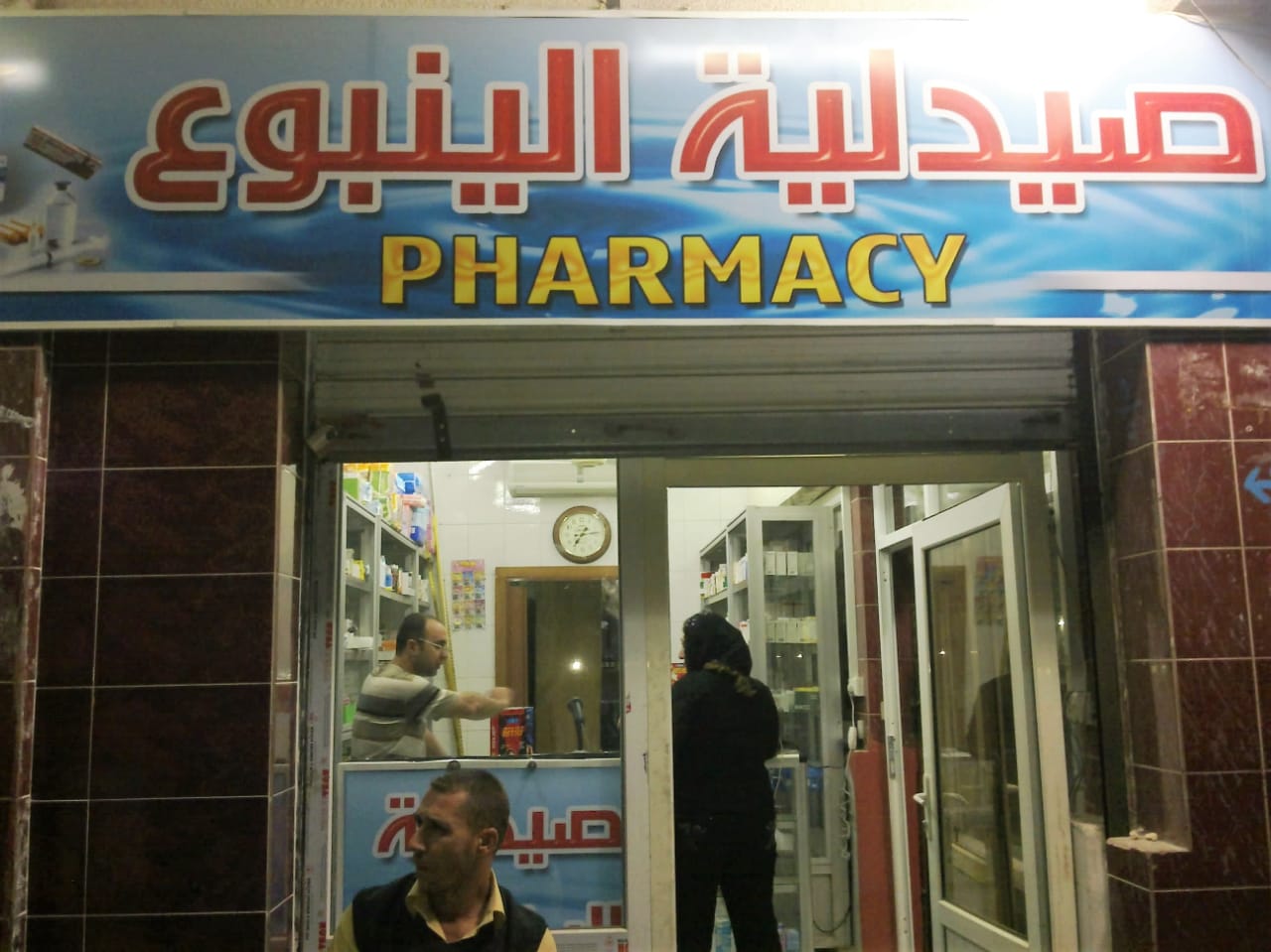 The al-Khatyars’ pharmacy is seen in their hometown of Mosul. 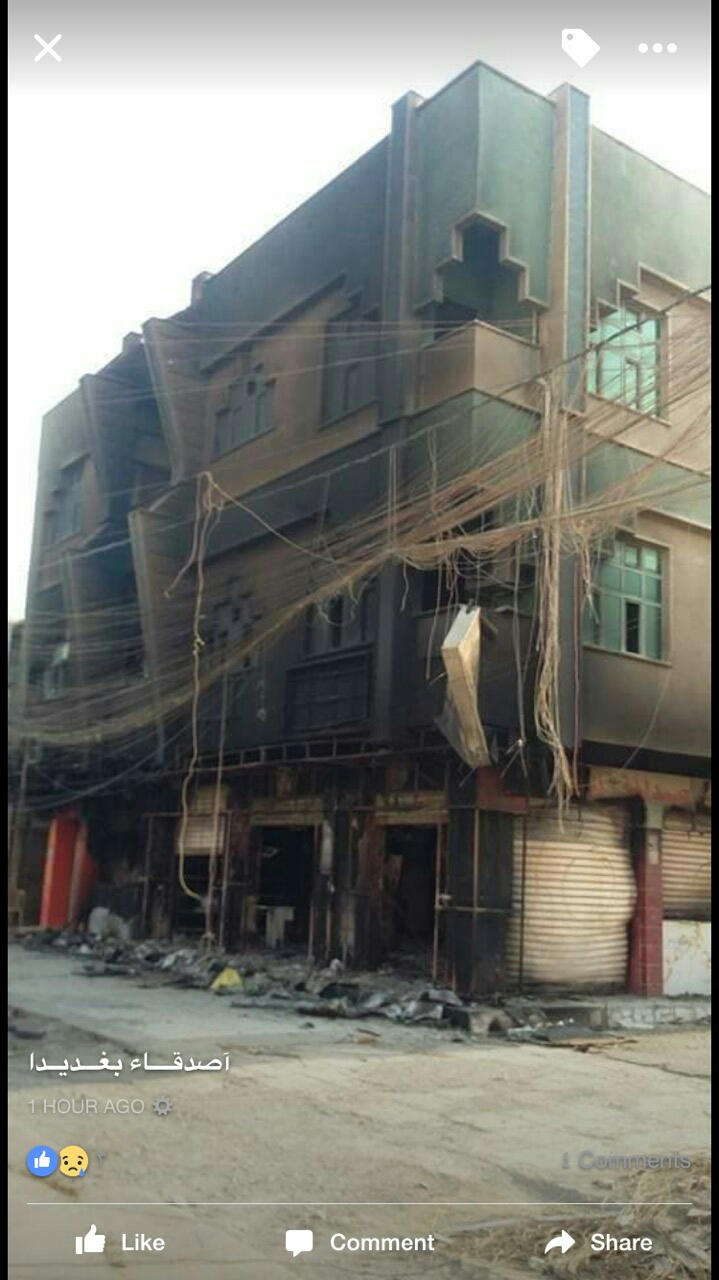 The Al-Khatyars’ burned-out building is seen after an ISIS attack. 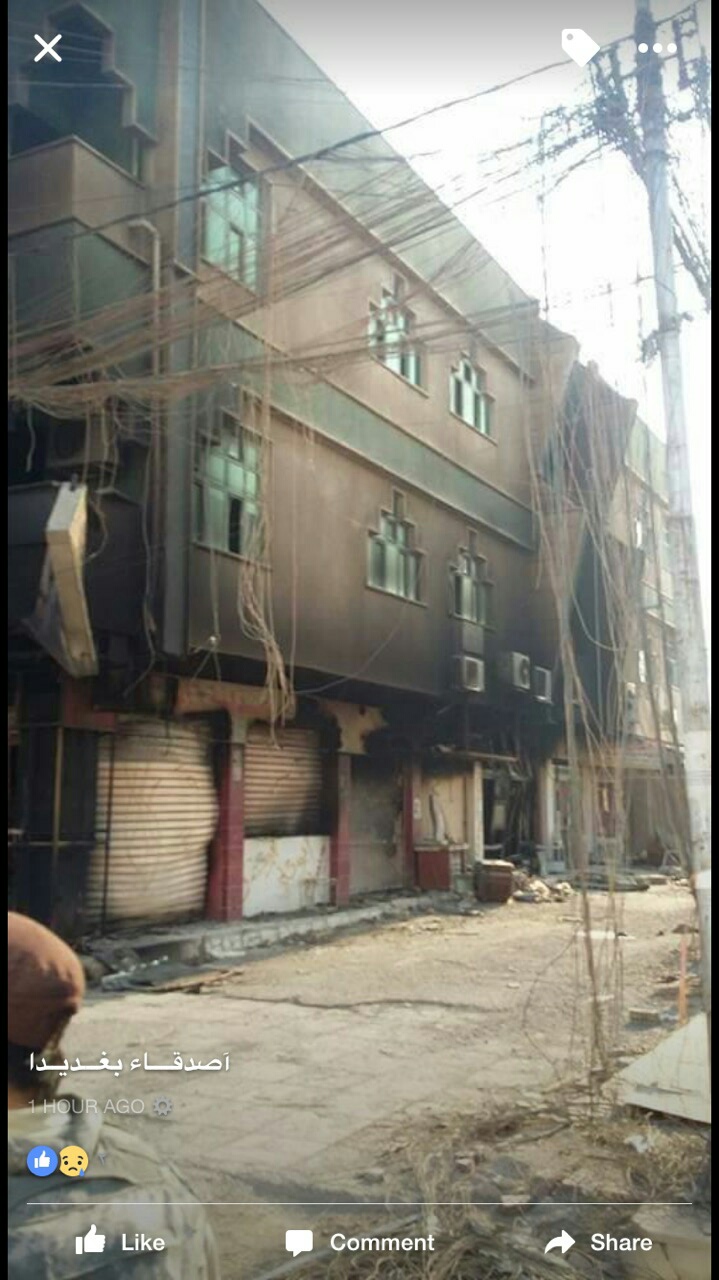 An ISIS attack burned out the Al-Khatyars’ building, destroying their family home. 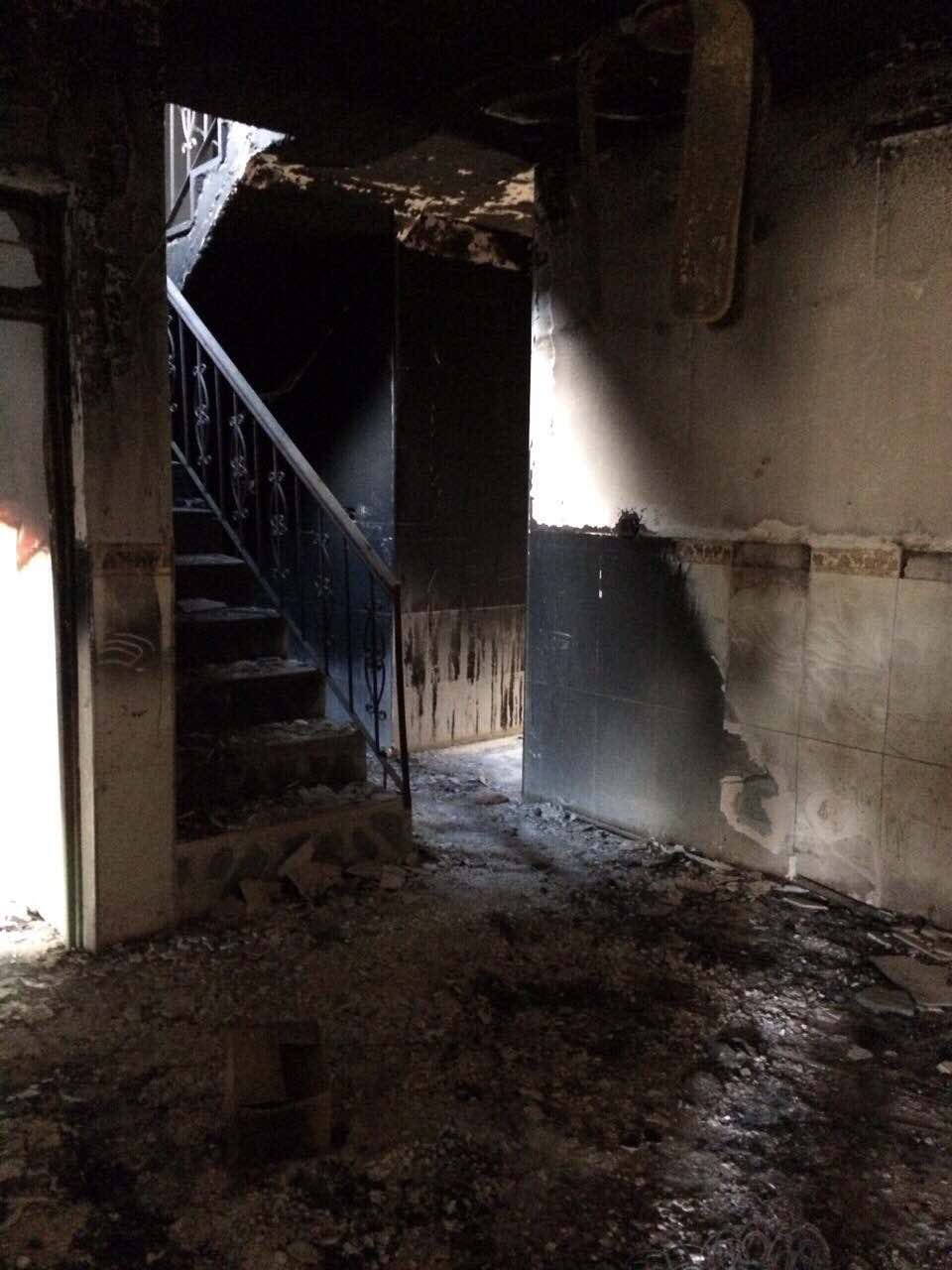 The Al-Khatyars’ home in Mosul was destroyed by ISIS. 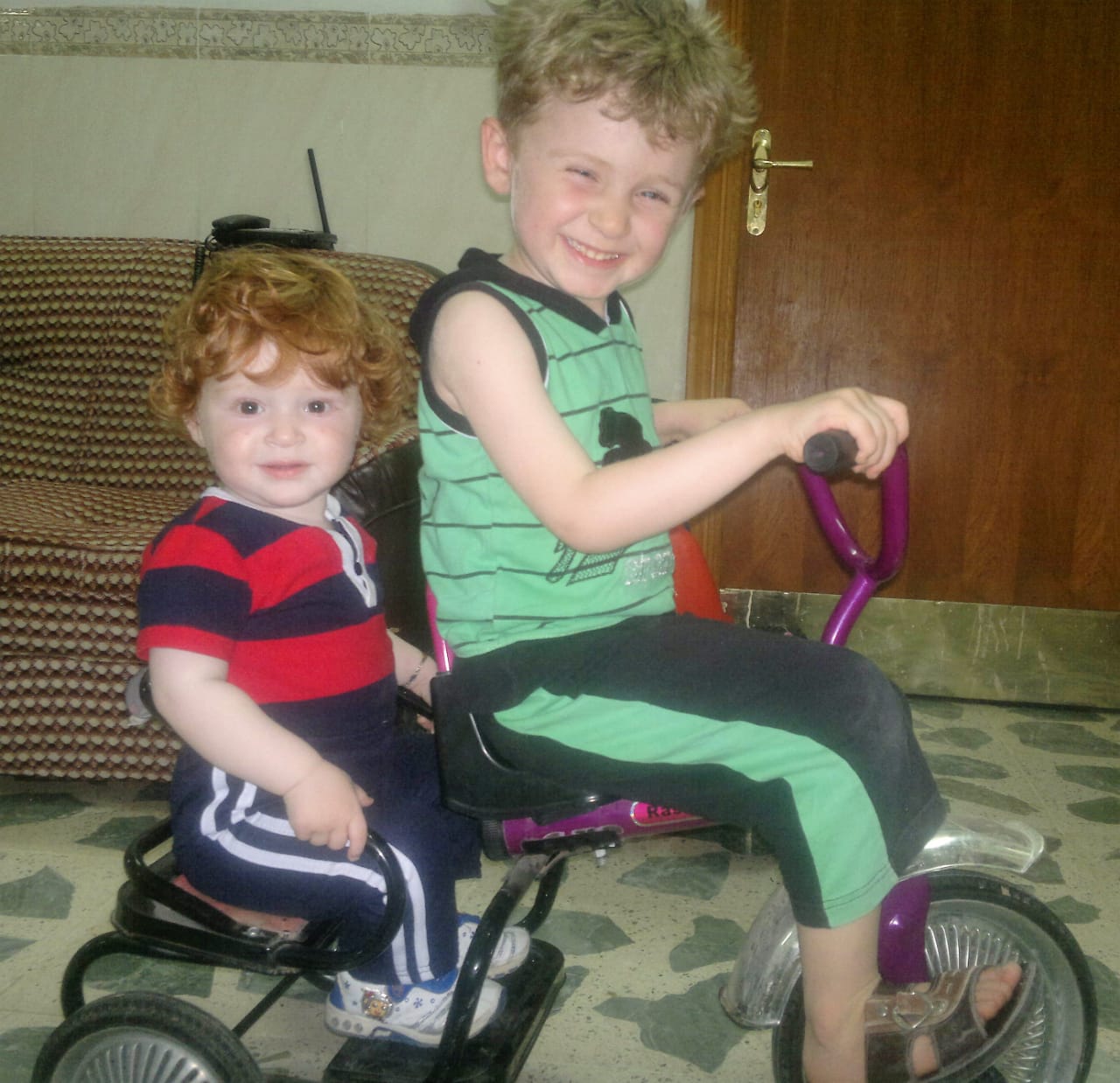 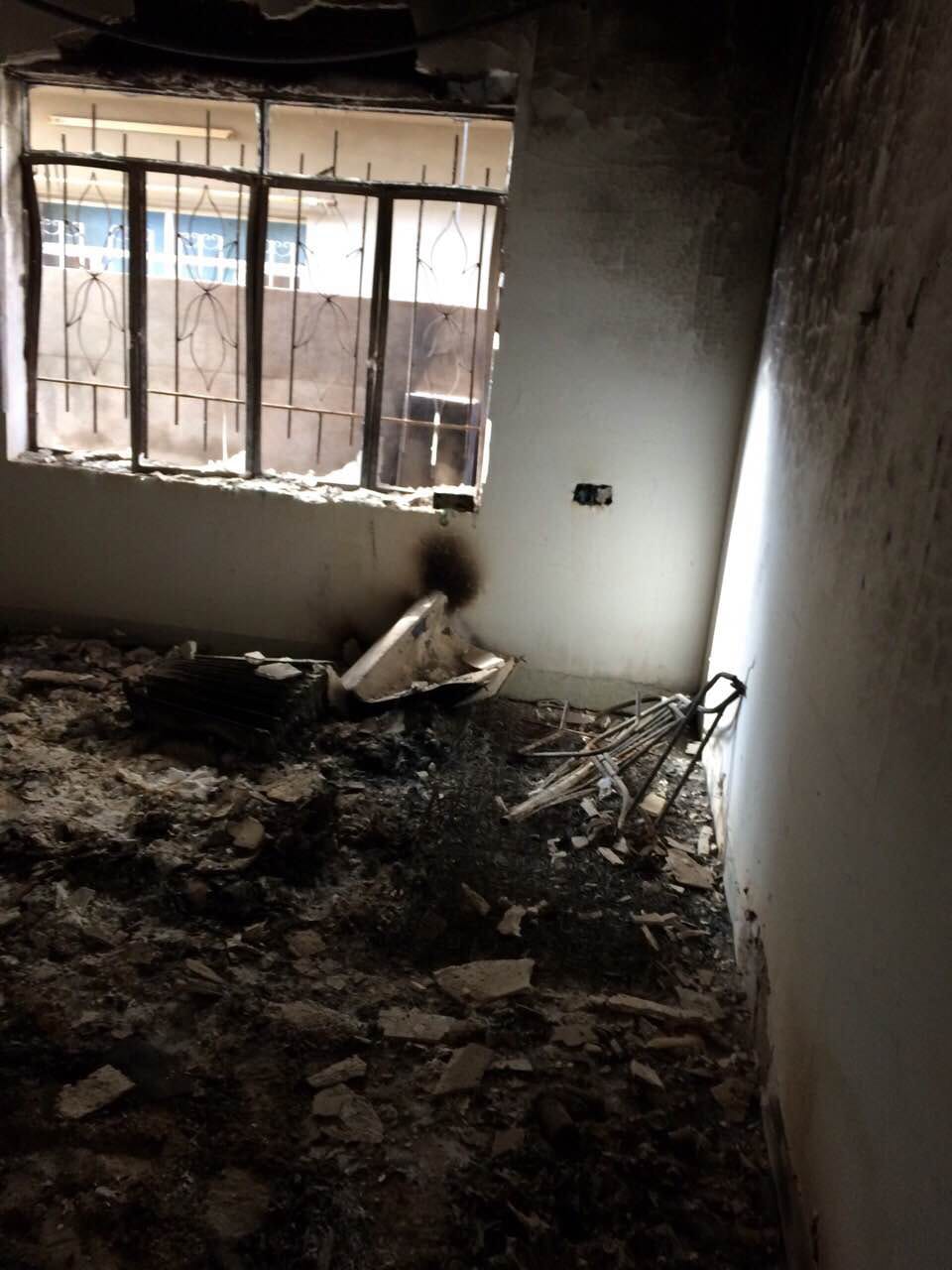 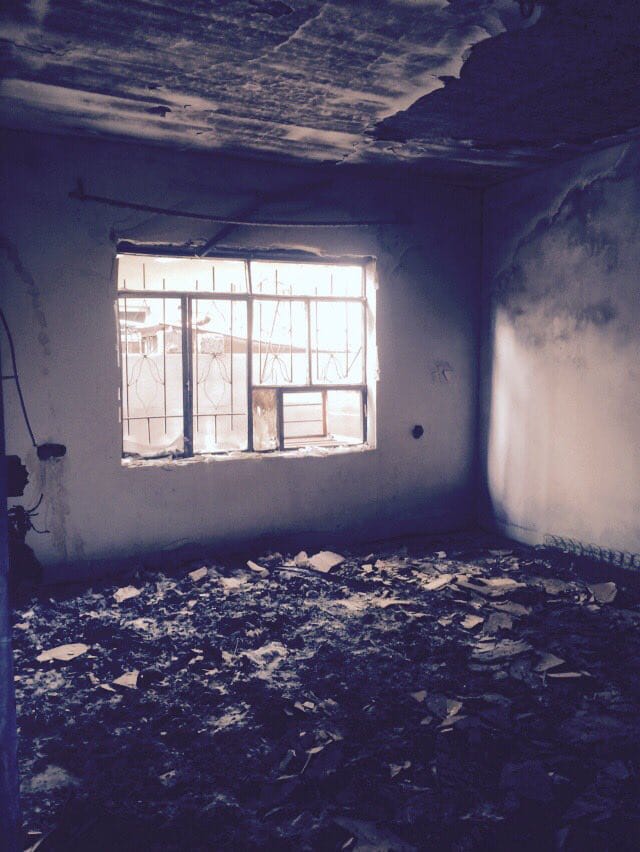 Only walls are left of the Al-Khatyars’ family home after being destroyed by ISIS.

Noran still remembers when their first saw the photos of their home – and the impact on her son Majd.

“He saw the picture and said, ‘Mom, why do they this? What happened to my toys and my room?’

Up until this moment, he remembered everything – more than me,” Noran said tearfully. “I’m very sorry for him because he remembers … Sometimes I don’t have any answer for him.”

“When I tried to made him feel better, I felt worse. My kids make me remember.”

It has been a harrowing – at times life-threatening – journey to Canada for the Al-Khatyars, a Christian family who fled Iraq with their lives and just their clothes on their back.

They have now made their home in Edmonton with the help of St. Thomas More Parish, and dozens of volunteers who helped them settle.

Throughout their ordeal, Noran said they were sustained by their strong faith when they had little else.

“If we don’t have faith, we can’t do anything,” Noran said. “We have a great trust in our God, because I know that if God was not with us in these hard years, maybe we would have been killed.

“We believe that God was with my family from the first moment. He took our hand and helped us with every step.”

When the family arrived, it was -26 C outside and they had been travelling for 25 hours straight from their temporary home in Lebanon. But it didn’t matter.

“I feel peace for the first time after many years,” Noran said.

However, their arrival in Canada was bittersweet, because Khalid and Mayayadah’s aging parents are still living by themselves in Beirut, waiting for their visas to be approved. How long that will take is uncertain.

Before the ISIS attacks, the Al-Khatyars lived what they considered a normal life, even in a country that weathered the rise and fall of dictator Saddam Hussein. Khalid ran a successful business. Noran took care of their boys. And Mayayadah was a first-year pharmacy student at the University of Mosul.

The al-Khatyars are seen in this family photo prior to the ISIS attack.Supplied

They were among the 12 per cent of Mosul residents who were Christian. However, with the American invasion and retreat, ISIS filled a power vacuum, and many Christians left.

Soon, the Al-Khatyars started feeling the pressure too. Non-Christians wanted them to leave because of their privilege and their faith. The Christians had more education and owned more of the businesses in Mosul.

It started with kidnapping for ransom, then it became increasingly more brazen.

In 2008, the demands that Khalid pay tribute to ISIS began. In a letter he provided to immigration authorities, Khalid said a threatening letter was left in his garage, vowing that his family would be killed.

“I was always in danger,” Khalid explained.

Noran said she never knew if her husband would make it home after work.

On June 10, 2014, when ISIS entered Mosul, fighters went door to door, burning houses and looting homes. The Al-Khatyars packed up their extended family of seven and fled Mosul, heading north to Qaraqosh. Soon they learned that ISIS was closing in.

With barely two hours’ notice, they fled again, escaping what they say would have been certain death.

They were forced to leave their house, business and possessions, from the biggest to the most sentimental – including Khalid and Noran’s wedding video.

“They stole our house, my husband’s pharmacy, and burned it. Everything ended in one moment. Everything you built. Your future,” Noran said, crying. “We lost everything. We thought: We’re leaving Iraq for the future of our kids. We don’t want them to live what we lived.”

New reports and governments claim ISIS is defeated, but that’s not true, said Al Allos, a member of St. Thomas More’s refugee sponsorship committee who is helping the Al-Khatyars. He himself emigrated from Iraq in 2005.

“ISIS is still there because it’s an ideology. How can you defeat an ideology before educating the whole country again?” asks Allos.

The Al-Khatyars tried to find refuge in Jordan as other Christians had, but they couldn’t obtain a visa. Instead, they lived for four years in Beirut, where life was not easy. The cost of living was high and Khalid could barely find work as a cashier.

Sleeping on the floor, Noran was faced with answering Majd’s questions. Why is his dad not working? Why are we living in this house? What happened to our old house? The toys? The life?

Noran would pray with her boys that God would lead them a new home in a safe country.

The remains of a tricycle are seen in the al-Khatyars' home.Supplied

The family initially applied for asylum in Australia, where Noran’s relatives live, but they were refused entry three times because they were a family of seven – including Khalid’s parents.

They applied to Canada, where a family friend in St. Albert brought the family’s plight to the attention of St. Thomas More Parish. The committee there had experience settling refugees. A couple of years ago they settled six families at once.

Volunteers found a house for the Al-Khatyars to rent and furnished it.

“It was like one of those reality TV shows,” said committee chairman Eric Green. “We all came at 10 o’clock in the morning and three hours later, poof! It was a like a show home. Everything donated from the parishioners of St. Thomas More.”

Young Majd was particularly pleased with the new home.

“The first day at this house, after we came from the airport … he said, ‘Mom, I have a new room? This is my room?’ It was so amazing,” Noran said.

“I’m happy for my kids. We can start again. I was very happy. It was amazing.”

Under the sponsorship program, the federal government loaned the Al-Khatyars the $12,000 cost of their trip. Once they are settled, they have to start repaying it over eight years. And the sponsorship committee only looks after their basic needs for a year.

“They had a life much like our lives before the war came to them. And that’s all gone,” said Heather-Jane Au, a committee member. “They have to start from square one again … It’s a really hard process from what I’ve seen. Our role as a committee isn’t to do everything for them. It’s to help them get themselves on their own feet.”

The Al-Khatyars, as other families, will have to find work, child care, groceries and life in a new country, but by all accounts they are well on their way.

Already, Khalid has obtained his driver’s licence and has dropped off job resumes. He hopes to be accredited and return to work as a pharmacist, which he hasn’t been able to do for four years. And Mayayadah wants to continue her university studies.

Majd and Mark attend Archbishop Joseph MacNeil Junior High School, where they are in kindergarten and Grade 3 respectively.

Like other boys their age, they like watching Power Rangers on TV. Majd wants to be a veterinarian and Mark wants to be a pharmacist like his father. Mark has a dream that many of us take for granted: Having a car to drive to and from work like his dad.

Through a translator, Majd said his teacher paired him up with another student originally from Mosul. He helped him with his English in school and in the playground where they romp with others in the snow. “So good!” Majd said in English.

Asked if they miss Iraq, Khalid is unequivocal. “No,” he laughs. “Nothing. Not when you do everything, you work well, and you’ve lost everything in one minute.”

Noran adds that the government didn’t offer help or protection.

“Iraq? I try to forget everything.”

Now, the most recent photos in the Al-Khatyars’ album are of Majd and Mark beaming again. The family is a part of St. Thomas More Parish, and they attended a recent Knights of Columbus pasta dinner and dance.

“Oh my goodness, Mark danced the whole night away!” Au said. “I think the family is the key thing. The kids are happy and doing well in school. That really helps, even when there are down moments and memories and, I’m sure, flashbacks.”

“They are so strong in their faith. You hear stories of many people, even with struggles in Canada, who lose faith when they suffer. That’s not what this family has said. They said ‘God is with me to get through this,’ and I think it just helps all of our faith to hear that and see that and feel that.”

In the streets and stores of Edmonton, the Al-Khatyars are greeted often with “Welcome to Canada.” It’s a far cry from the 6 p.m. curfews, threats, and fear in Iraq.

“You are scared. This is not a normal life that anyone would want,” Noran said. “I want to say to the Canadian people: ‘You have a great country. Freedom is important to life, so enjoy and protect your country.”

In spite of their ordeal, Noran said her family is stronger because of what they endured and, watching as Majd and Mark eagerly show off their new bedroom, toys and books, the hardships were worthwhile.

“My family really wants to thank the whole St Thomas More community. From the first moment we arrived in Canada, they have been there. They are helping us with everything. Really the community makes me feel like they are my family. With them we are not alone, we have a family here in Canada,” she said tearfully.

“We suffered everything, all these years, for this moment when you see your kids happy. At this point everything is finished for me, seeing my kids happy and they can start their new life, that’s all.”