There are many days when working as a chaplain is a glorious experience.

Over the next month this becomes particularly obvious as I’ll have the privilege of attending graduations and Grade 8 farewells for students I’ve been blessed to journey with over last few years. These moments give us all – parents, school staff, and friends – the opportunity to celebrate what students have achieved so far, what they’ve overcome, and the incredible hope that each one of them represents to us.

To get to this point, there are also some harder days.  One that sticks out to me was the day a junior high student shared with me a lack of hope for her own future. It all started with a quote from one of my favorite movies: The Truman Show.

In 1998, Jim Carrey starred as Truman Burbank, the “star” of the most ambitious reality show ever conceived.  The trouble was that he didn’t know it.  Although Truman was a man who had lived his whole life on TV – surrounded by actors – he believed that all of it was real.  When it’s suggested that the producers of the show are being cruel to Truman by misleading him, the producer of the show, Christof, states: “All of us are brought into a reality we believe is true, but we grow up to find out that it’s not.”

This is a pretty grim statement, but it’s one that tends to spark conversation. So as a part of my work in the schools, I show this scene to students and ask what they think of Christof’s statement. Many of my students find it to be accurate, citing children’s tales of the tooth fairy and the Easter Bunny.  It was in the midst of one such discussion that a junior high student told me that she used to believe that someday we live ‘happily ever after’ – but she doesn’t believe that anymore – and a number of her classmates agreed.

It’s a comment I’ve never forgotten.  It seems to fly in the face of all the hope I’ll see at graduations and farewells over the next month.  In the weeks that followed this particular discussion, I found myself wondering why her outlook was so bleak – largely because this is so different from my perspective on life.

When I grew up, I embraced stories, TV shows, and movies that centered on hope.  Chief among these would probably have to be Star Trek, which presented Gene Roddenberry’s vision of a future where humanity has – completely by our own efforts – eradicated poverty and war from the face of the earth.  While the crew of the Enterprise often dealt with crises and conflict, these were generally resolved within an hour or two.  It’s a tremendously optimistic view of the future.

As I grew older, I found other stories that reinforced this sense of hope: not just action movies and hero stories, but I also discovered J.R.R. Tolkien and C.S. Lewis, whose stories of Narnia and Middle Earth were imbued with that same sense of confident expectation.

While some of the stories we share with children today are still filled with hope (think about almost anything produced by Disney, or the all the hero movies filling our theatres), there also seems to be a growing number of novels and movies aimed at teenagers and young adults which the future in dystopian terms.  From The Hunger Games to the Legend trilogy, Divergent, Ready Player One, and Maze Runner – there’s a number of stories written for young people which present the future as being tremendously bleak. Even the wildly popular video game Fortnite is set in a world where 98 per cent of the world’s population has disappeared and the survivors are left to fend for themselves against various challenges.

But it’s not like this is anything new.  There are also many older stories which present an equally undesirable future to the ones mentioned above, which says nothing of the moments in history where people have often felt as though their own future was without hope.

What I’m finding is different today is that many of our own young people don’t know the stories of our faith. The Bible is filled with people who find, in the midst of darkness and fear, life with a certainty that God is with them and will at some point in the future set things aright.  In my work with young people, I cite examples from Scripture whenever I get the chance… but I find that quite often I need to do more than just set the scene. I also need to present even the most common Bible stories as if they’re being heard for the first time.

And so it was fitting that last September, Archbishop Richard Smith challenged us all to dust off our Bibles and to start reading again.  It was an invitation to rediscover what it means to be a disciple of Jesus who hears the Word and lives it out.  As disciples, we are meant to live each day – not only graduation day – with the certainty that God created us, loves us and died for us, and remains with us always. This is the greatest of hopes – a hope both for now and for the future

– Mike Landry is the chaplain for Evergreen Catholic Schools, west of Edmonton. Follow him at thirdplaceproject.com. 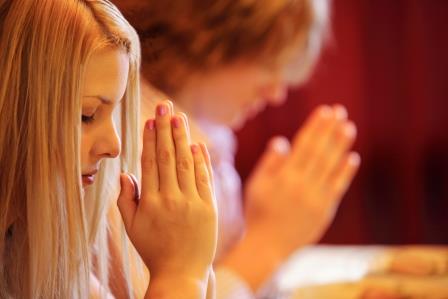