Skip to content
Rev. Don Stein’s upcoming trip to Tuktoyaktuk N.W.T. will be part of a farewell trip to see the people of the Arctic Ocean hamlet one last time.Photos supplied

At 85, most priests would be content to mark six decades of priesthood with quiet retirement. But not Rev. Don Stein.

Father Stein has been a beloved pastor in the Edmonton Archdiocese for six decades. It’s a ministry he has loved, and his parishioners have loved him back. Decades later, they still remember him both in Edmonton and Tuktoyaktuk, N.W.T., where he has celebrated Holy Week Masses for years.

This year, Stein’s trip to “Tuk” will be part of a farewell trip to see the people of the Arctic Ocean hamlet one last time. He is among four priests from the Archdiocese who will be celebrating Holy Week in various communities in the northern Diocese of Mackenzie-Fort Smith.

As any pastor would, Stein will meet with the parish community after Mass. He may trade stories of hunting and fishing. He’ll listen to the children tell their own stories. And he may share a traditional Inuvialuit meal of dried meat and muktuk, Beluga whale blubber.

“He’s like a grandfather to all of us. He shared some of his own life with the people here,” said Sister Fay Trombley, a nationally renowned educator and pastoral leader who first brought him to Tuk after he officially “retired.”

Father Don Stein is planning to celebrate Holy Week in Tuktoyaktuk, N.W.T., where he has celebrated Holy Week masses for years. Photo supplied

“Father Don is such a blessing for us. He helped to raise consciousness of the centrality of Holy Week, which the people had a hard time to grasp prior to his coming.”

“Holy Week is so important,” Stein explained. “You have the whole mystery of our faith. They’re trying to keep the church alive, but this will be my last trip. I’m just doing it for my 60th anniversary … It’s almost a miracle,” he laughed. “My whole vocation is God sending me here, there and everywhere. Sixty years went by very quickly.”

Donald Stein was born on June 4, 1934, in the Calder neighbourhood of northwest Edmonton, where he lived with his older brother Benny, now a retired Edmonton firefighter, his dad Ben and mother Marie-Anne, a strong Catholic. He also had a sister who died in infancy.

With the outbreak of the Second World War, Stein’s father was called overseas. His mother was sick and his older brother took care of her. Donald, along with orphans and kids from broken homes, was boarded at the former Franciscan Sisters of the Atonement Home in Edmonton.

“They certainly treated us well,” Stein recalled. “Sister Claire Marie was really like a mother to us. When we say ‘the Atonement Home,’ she really made it a ‘home’ for us. Sister had us accompany her to do shopping from warehouses. She’d teach us to be gentlemen, to walk on the streetside of the sidewalk. It was very homey, very personal.”

After the war, the family struggled. Stein’s father returned with a drinking problem and left the family two years later. “My mother, being a woman of faith, survived to raise us two boys, now in our teenage years, alone,” Father Stein wrote in a reflection. “Our faith in God’s providence pulled us through.”

Stein attended Sacred Heart, St. Edmund, St. Alphonsus and later St. Joseph’s Boys High School. He is helping to organize a reunion this year of 50 alumni of St. Joseph’s school for boys and St. Mary’s school for girls. A special reunion Mass is planned for May 16 at St. Joseph’s Basilica.

As a young man, Stein attended St. Mary’s Redemptorist College minor seminary in Brockville, Ont. but his grades didn’t make the cut. His former principal helped him out.

Stein considered becoming a chef, because he liked cooking. But the call to the priesthood was loud.

“A priest, his work and what he does, was admired,” Father Stein recalled. “Being in the Atonement Home, we went to Mass every day, but it was really my grandparents who were very devout Catholics — my mother’s side of the family. When I was a kid, my grandmother would read me stories from the missions. Archbishop (John Hugh) MacDonald said your vocation comes from your grandparents. And they were instrumental in cultivating my vocation.”

Rev. Don SteinArchives of the Archdiocese of Edmonton

Stein was ordained on June 4, 1960, his 26th birthday. Afterwards, Father Stein was assigned to St. Francis Xavier Parish in Camrose. He returned last fall for the opening of the new church.

Throughout his career, Stein was assigned to both urban and rural parishes, including St. Patrick’s, Assumption, and St. Theresa’s in Edmonton, Sacred Heart in Gibbons, St. Anthony’s in Lloydminster, and Our Lady of Perpetual Help in Sherwood Park.

“I was back and forth like a yo-yo,” Stein recalled. “I liked them all. I was from the city and I knew how to handle people, but you become personally involved with people more so than in the city.

St. Clare Parish in Redwater was a highlight. “I’m a city boy and all of a sudden I’m out combining with the farmers,” Stein laughed. “They talked to me a lot.”

Over six decades, Father Stein made such an impression that he was often sought out by former parishioners. In early February, he enjoyed dinner with a former altar boy at St. Patrick’s Parish. “You have contact with people. You’re not physically married, but spiritually you’re married to a lot of people.”

Father Stein’s last parish was Sacred Heart in Red Deer and he helped celebrate its 100th anniversary before he retired in 2008. It was then that he answered a call from Sister Trombley, a former professor at Newman Theological College, to come up North.

“She said, about being up there, the hardest part is Holy Week, because they have no priests,” Father Stein recalled. “So I volunteered.

“I knew I had to organize and adapt to the situation,” he said. “You had ups and downs. For Holy Thursday, you could have 12 people and then Good Friday, you’d have 25 or something. You bring the message to their level. In other words, you’re speaking ordinary language. You’re not giving a highfalutin’ sermon.” 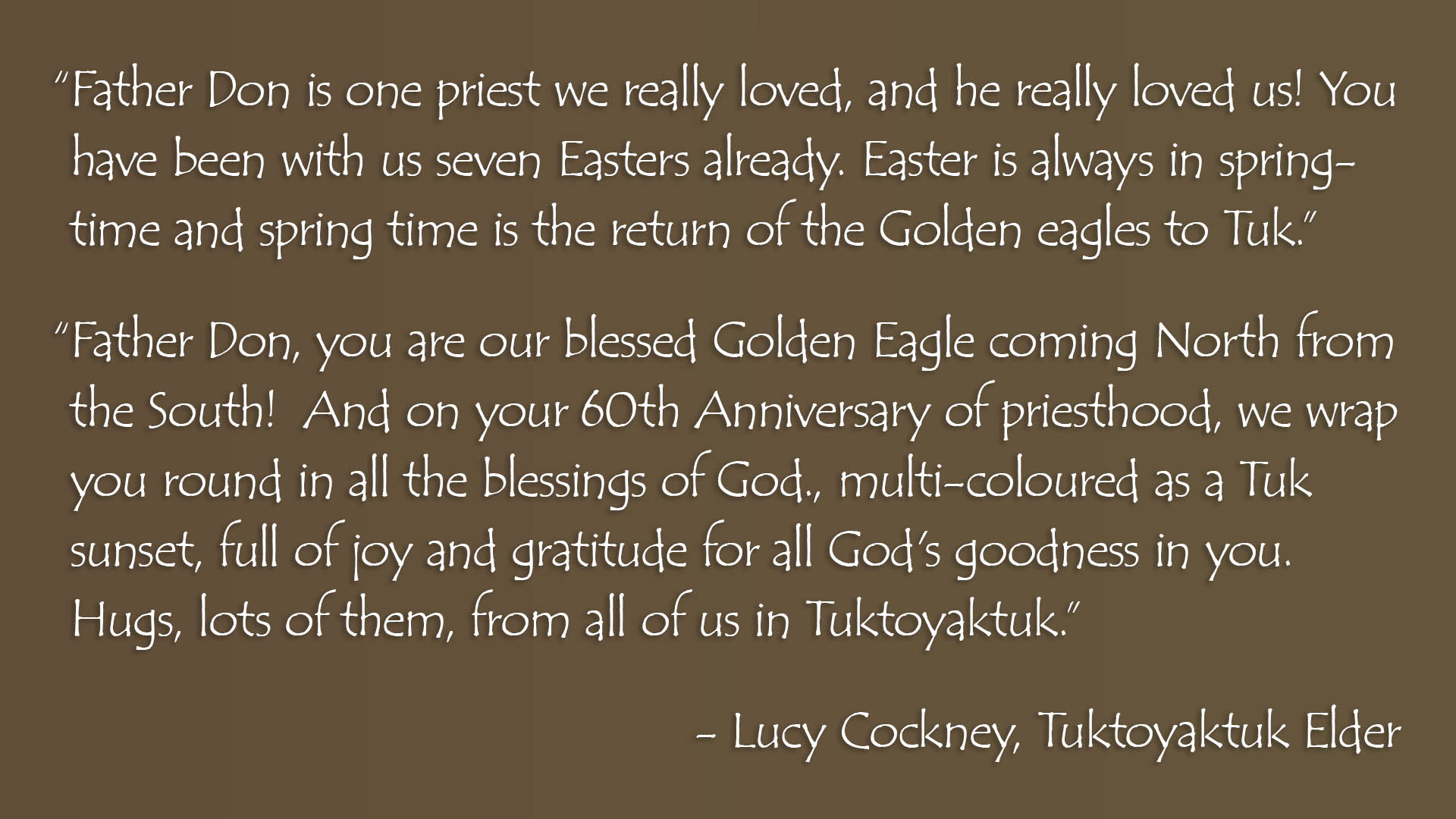 The Diocese of McKenzie-Fort Smith is twinned with the Edmonton Archdiocese and still in the need of priests. Some parishes may only see a priest a handful of times per year. In their absence, church services in Tuktoyaktuk are led by lay pastoral leaders Jean Gruben, Dorothy Loreen and Lucy Cockney. Sister Trombley will preach.

“They held together the faith and the church in Tuktoyaktuk in the absence of priests,” Stein said.

As in past years, Father Stein will stay at Sister Trombley’s house. The people of Tuktoyaktuk are excited to show him their new church building. For years, services were at her house or at the school gym.

“The people have a deep faith,” Sister Trombley explained. “It’s not based on memorizing the Ten Commandments or knowing a lot of theological specifics or catechetics, but it’s really a relationship with Jesus Christ, and it’s very visible in funerals and in church gatherings. People have a profound relationship and simple faith that is really a blessing to anyone who has a chance to be sharing it with them.”

In addition to Father Stein, four other priests are celebrating 60th anniversaries this year: Fathers Archibald MacKenzie and Rene Belanger of Edmonton; Father Stanislaw Blaszkowski, who has retired to Poland, and Father Don MacDonald, a professor and former president of Newman Theological College.

For his part, Father Stein said this will be his last trip to the North, but the people of Tuktoyaktuk know better.

“We don’t believe that!” Sister Trombley said. “We say Father Don has a spirit that is eternal. His spirit is always here with us and we smile every time we remember him and share stories and just know what a blessing he has been to us.”

Asked about plans for his 70th anniversary as a priest in June 2030, Father Stein demurred.

“I pray every day that the Lord will give me another day. I hope I make it to my 60th anniversary as a priest!”

His advice to aspiring priests? Be yourself. “It’s a great job to have to just be you. Just be you. That’s important.”