Skip to content
Over 1,400 participated in the annual Alberta March for Life May 10 through the streets of Downtown Edmonton to the Alberta Legislature.Lincoln Ho/Grandin Media

For Olivia Vogelzang, not even unrelenting rain and sharp wind would keep her and her classmates from taking to the streets of downtown Edmonton for this year’s 11th annual Alberta March for Life.

“It’s something we have to fight against. The March for Life is fighting for children’s lives,” said the 16-year old student from the Covenant Canadian Reformed School near Barrhead. “You see so many things in the media today for rights and (social) action, and there’s nothing for these unborn babies.”

Vogelzang was among the more than 1,400 in the May 10 rally and march from the Alberta legislature grounds. It coincided with similar events throughout Canada, including the National March for Life in Ottawa, which had to be rerouted this year due to counter protests.

There were 12,948 abortions in Alberta in 2016 and more than 97,000 nationwide, according to the Canadian Institute for Health Information. There is no legal right to abortion in Canada. Instead, there is a legal vacuum that hasn’t been filled by Parliament since the Morgentaler decision three decades ago.

Pro-life advocates say the March for Life has become increasingly more relevant as Alberta lawmakers consider a bill that would require buffer zones around abortion clinics.

Bill 9, the Protecting Choice for Women Accessing Health Care Act, would keep protesters up to 150 metres away from the province’s two abortion clinics in Edmonton and Calgary.

Story continues below the photo carousel. 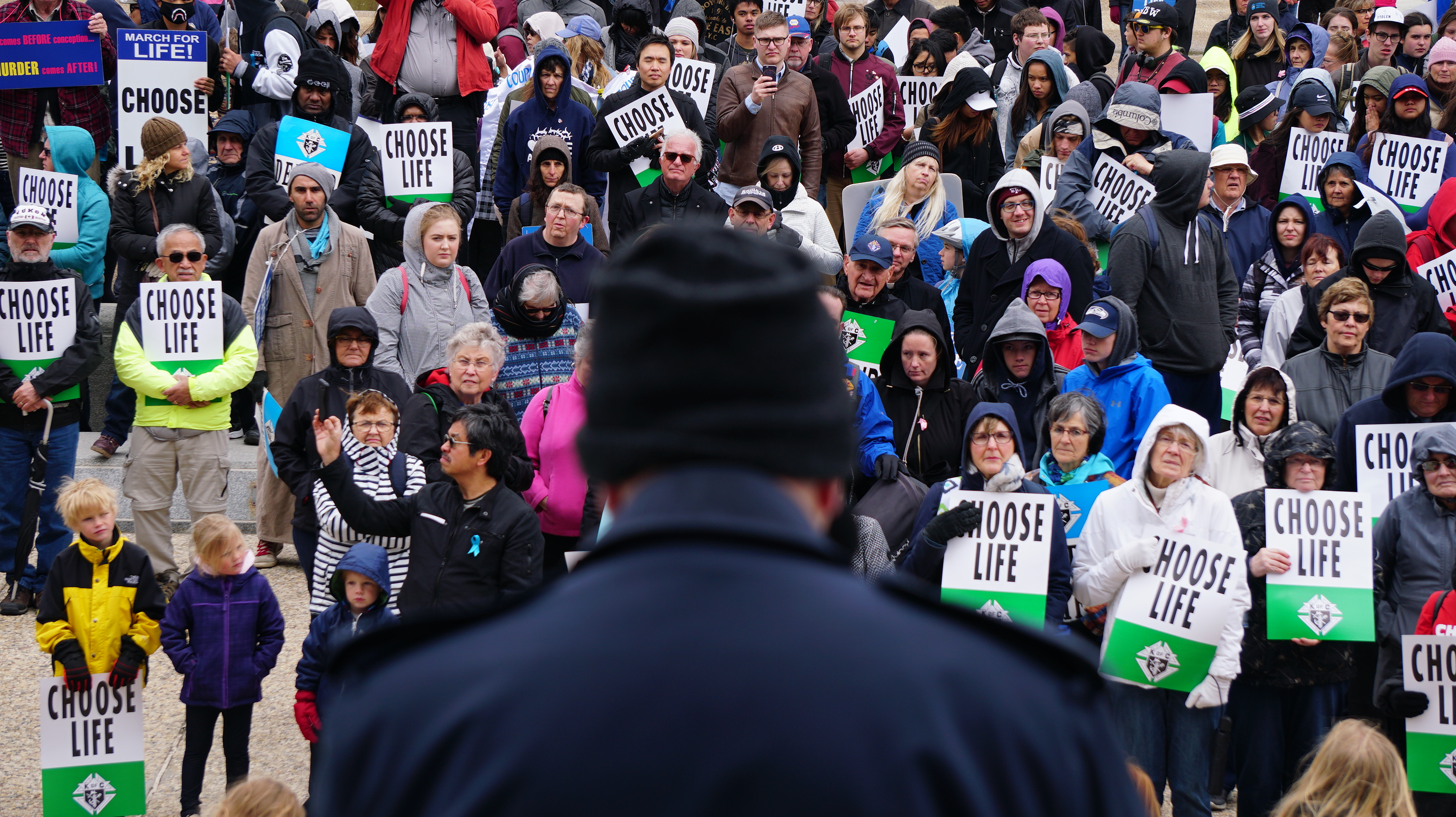 Archbishop Gérard Pettipas (Grouard-McLennan) addressed the Alberta March For Life with 4 points on half truths misrepresented by the pro choice movement. 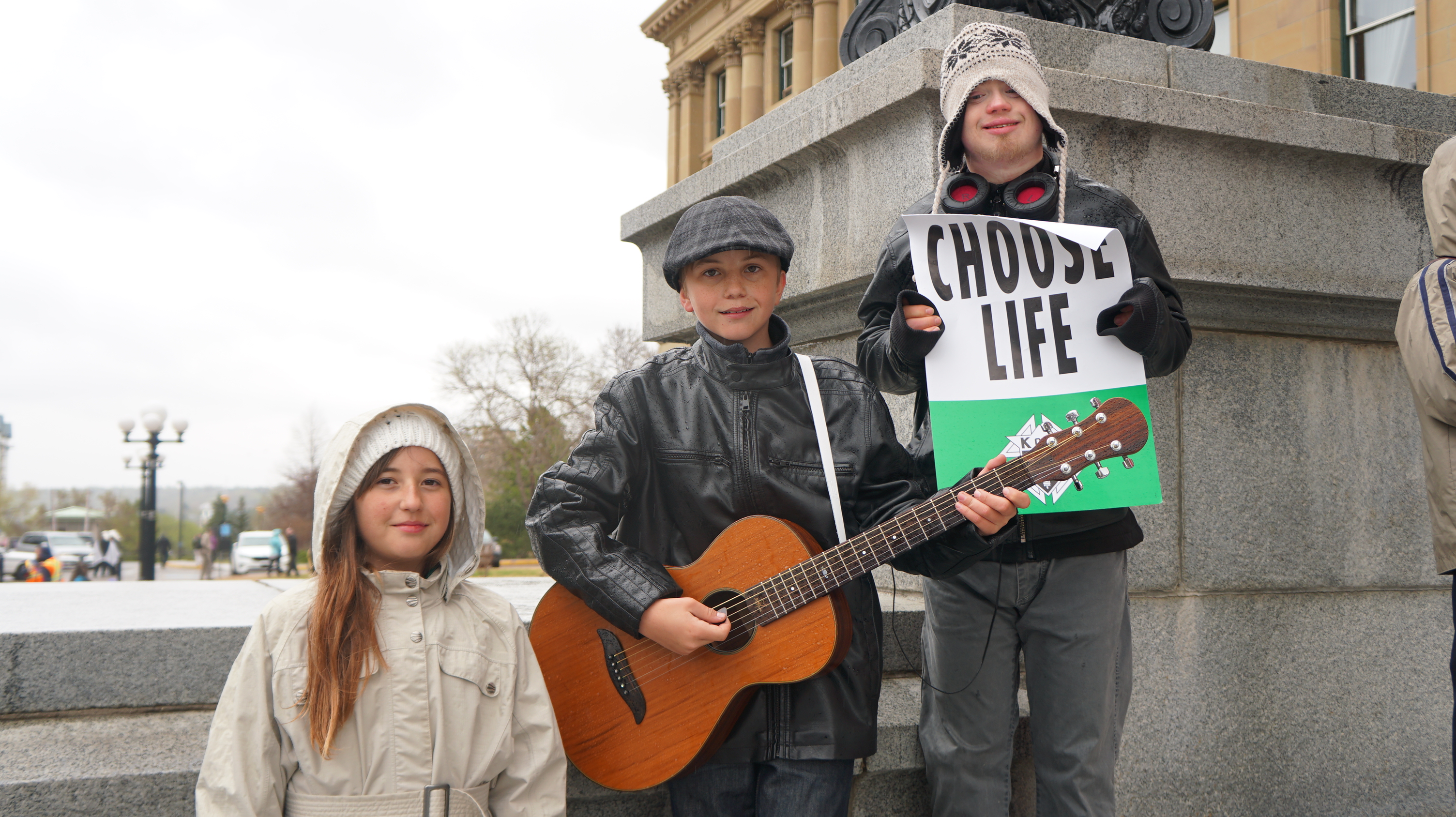 New this year was a musical performance by Tayla Cherry, Braiden Cherry, and Hank Round. Hank Round is a paralympian from Calgary with Down syndrome. They sang a song in which a video is banned in France as it portrays Down syndrome persons smiling. The French court ruled in 2016 that showing happy children with Down syndrome may be upsetting for women who have aborted babies due to the condition. 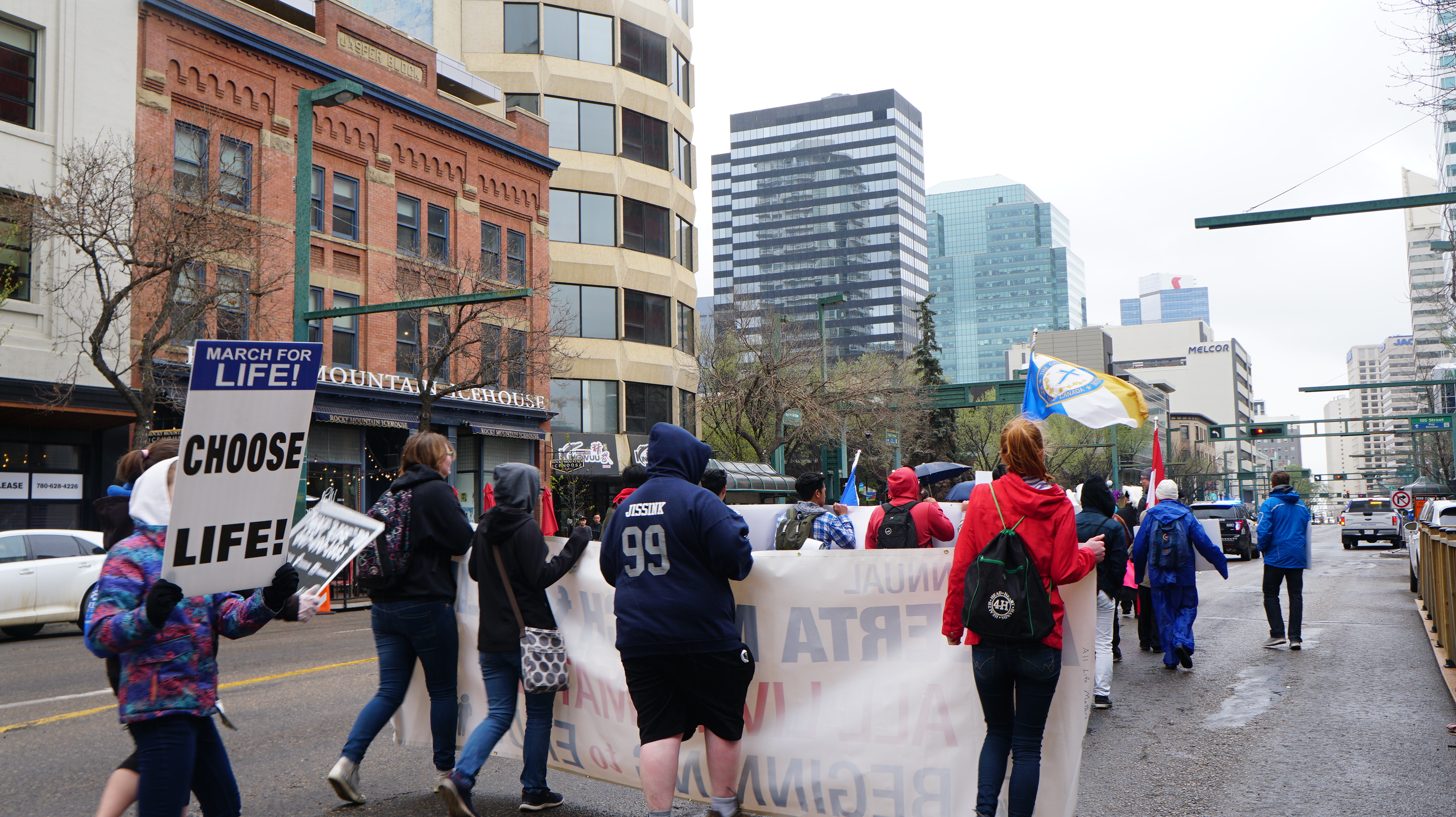 Participants in the Alberta March for Life walked down Jasper Avenue. The route was different this year, starting and ending back at the Alberta Legislature, due to Valley Line LRT construction preparation at Churchill Square. 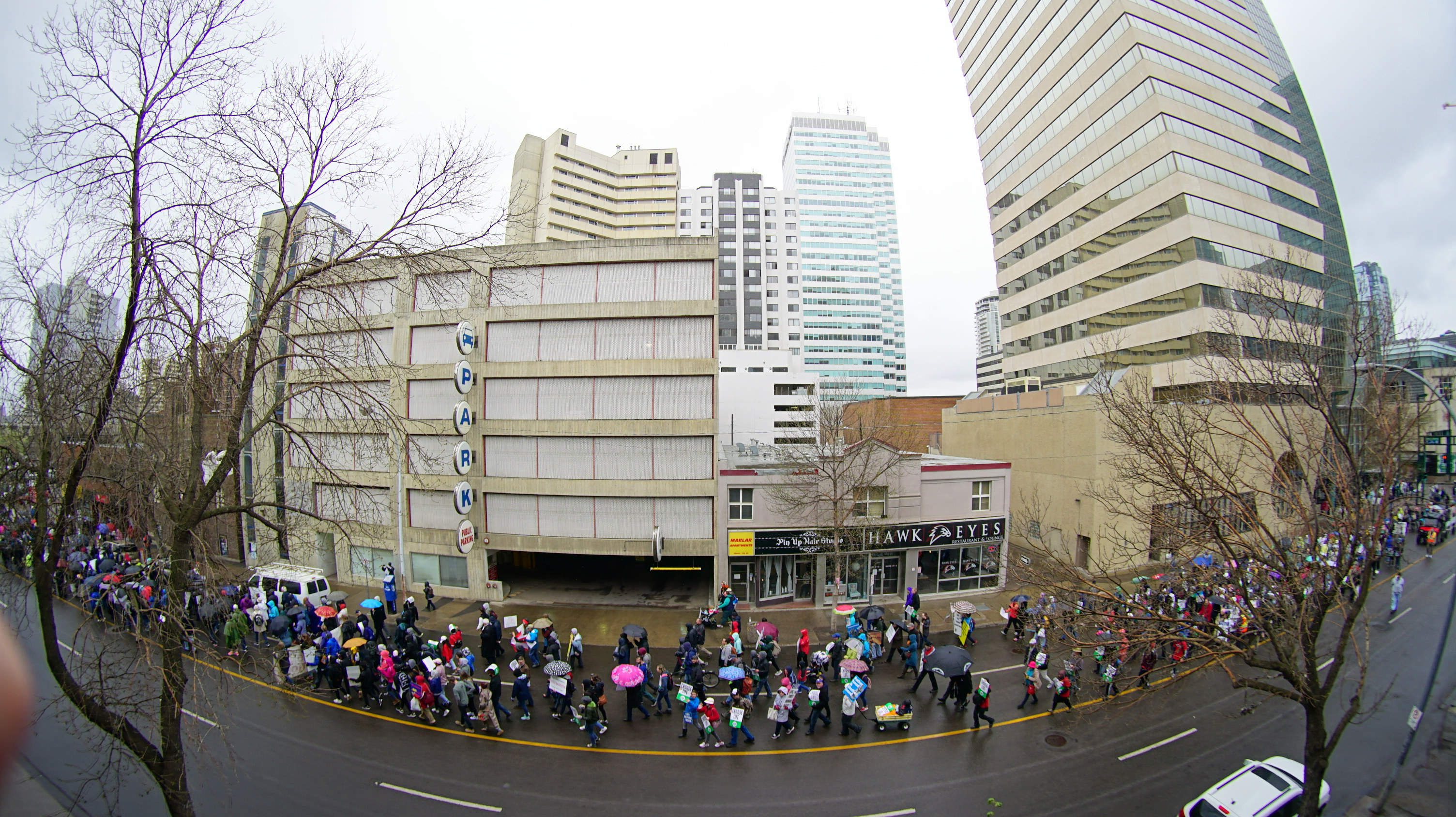 The line of people marching along the Alberta March for Life route extended at least 5 city blocks, according to the event marshall. The distance is equivalent to half a kilometre. 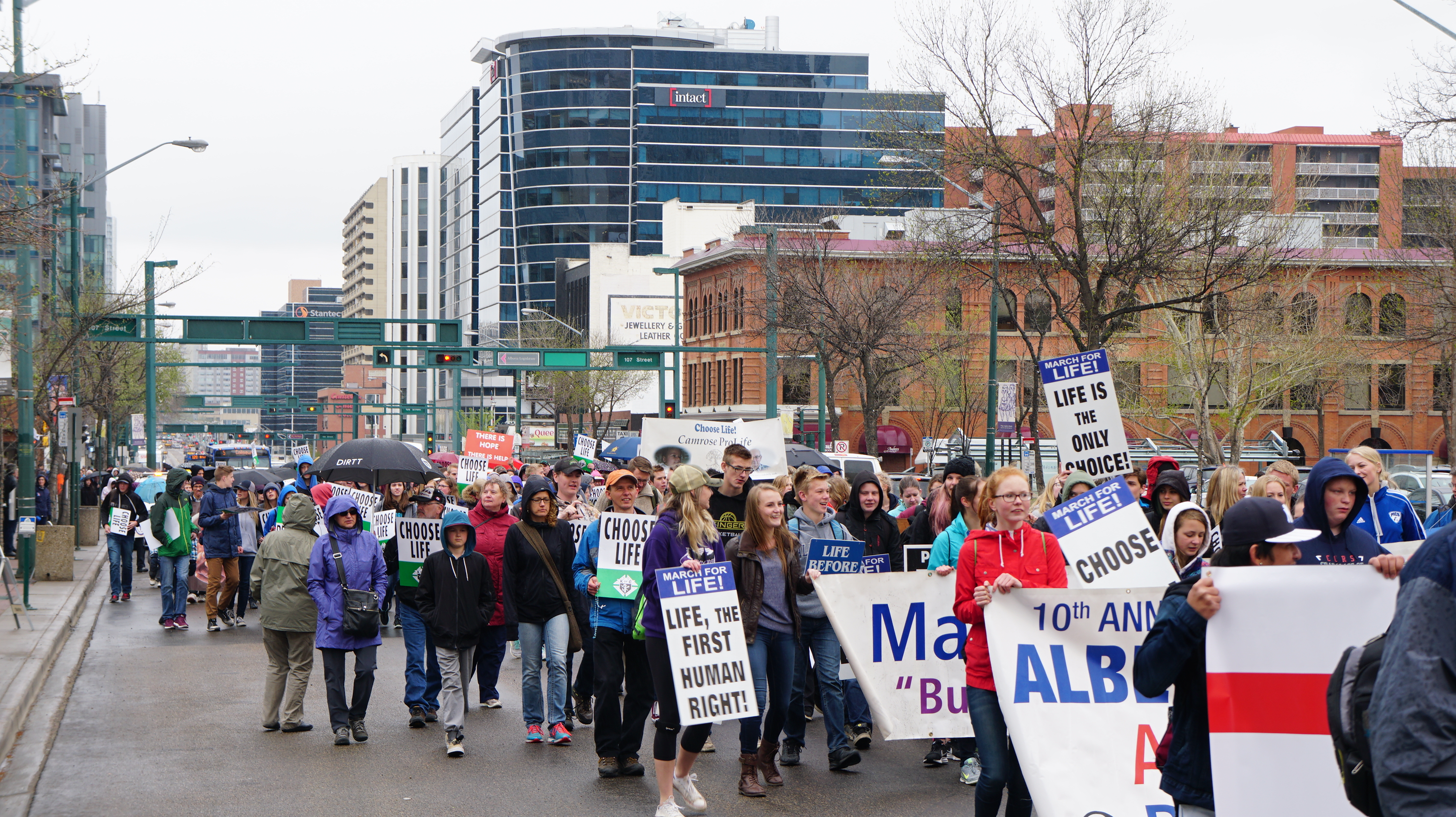 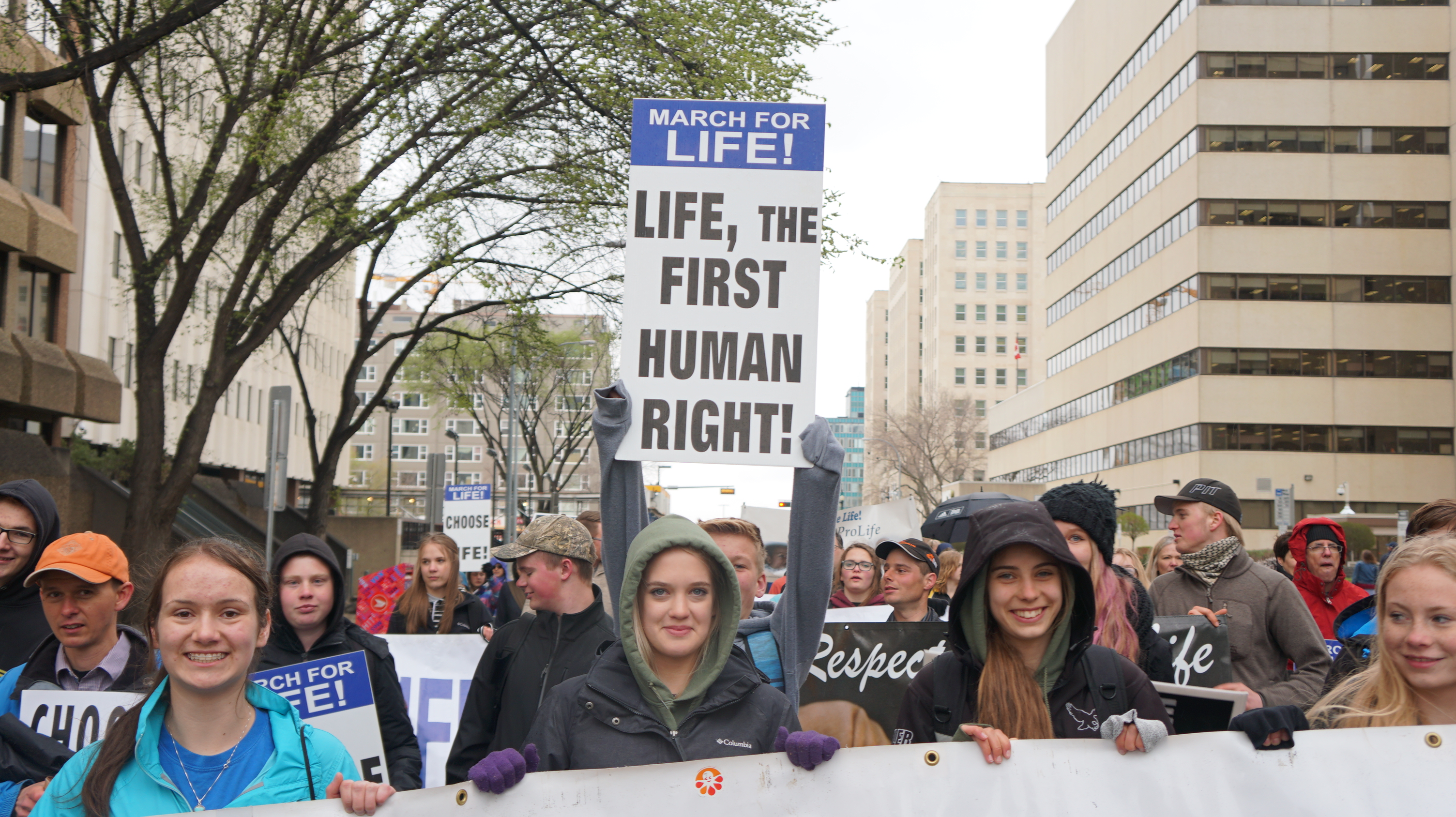 High school students volunteered to carry banners in the Alberta March for Life. One student noted that they had to earn their privilege to attend to skip the afternoon classes, and it was by choice. 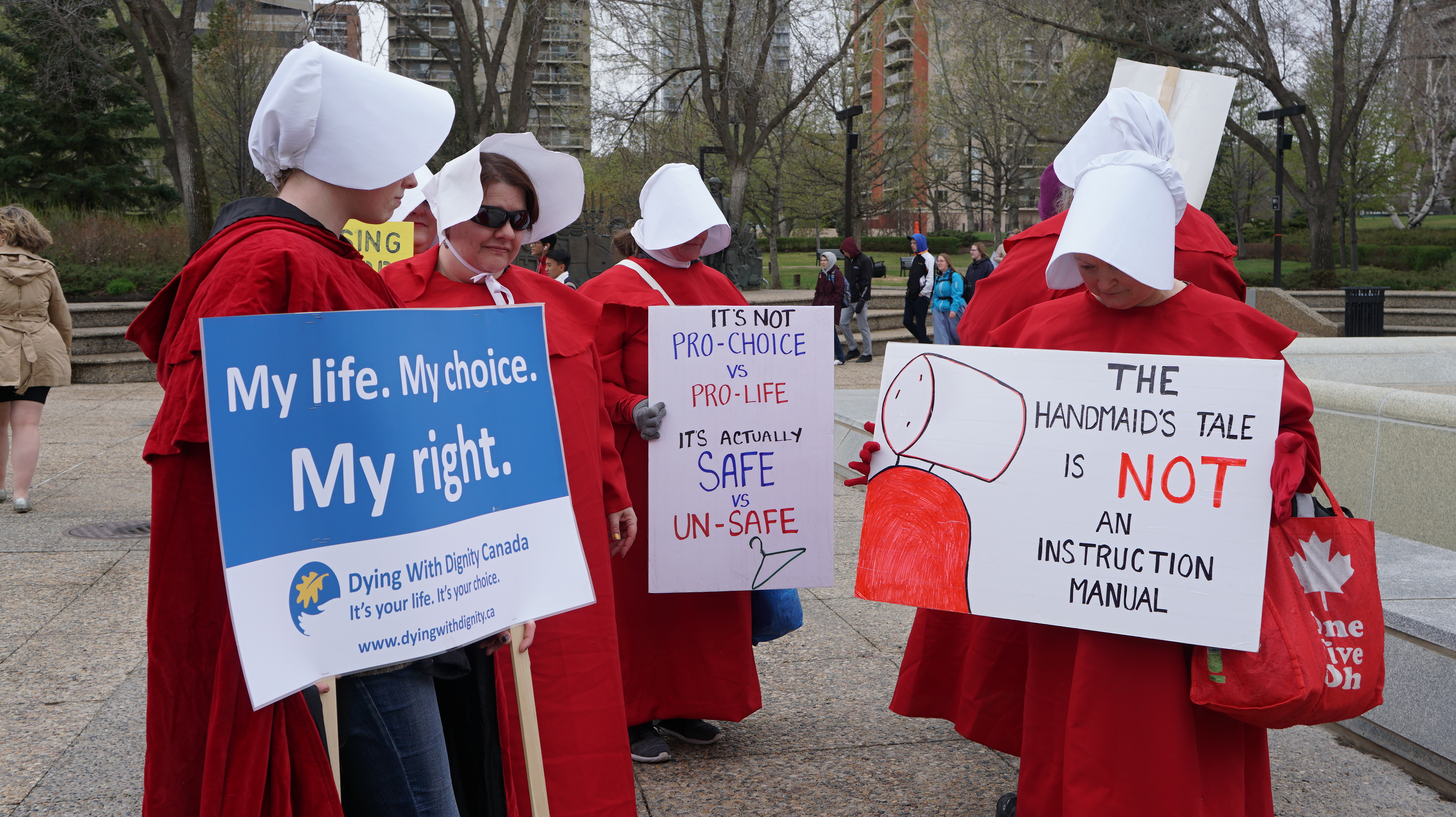 Pro-choice protesters dressed in a costume from a Handmaid’s Tale came in silent protest. They declined to show their faces for photos, as well as interviews from the media. 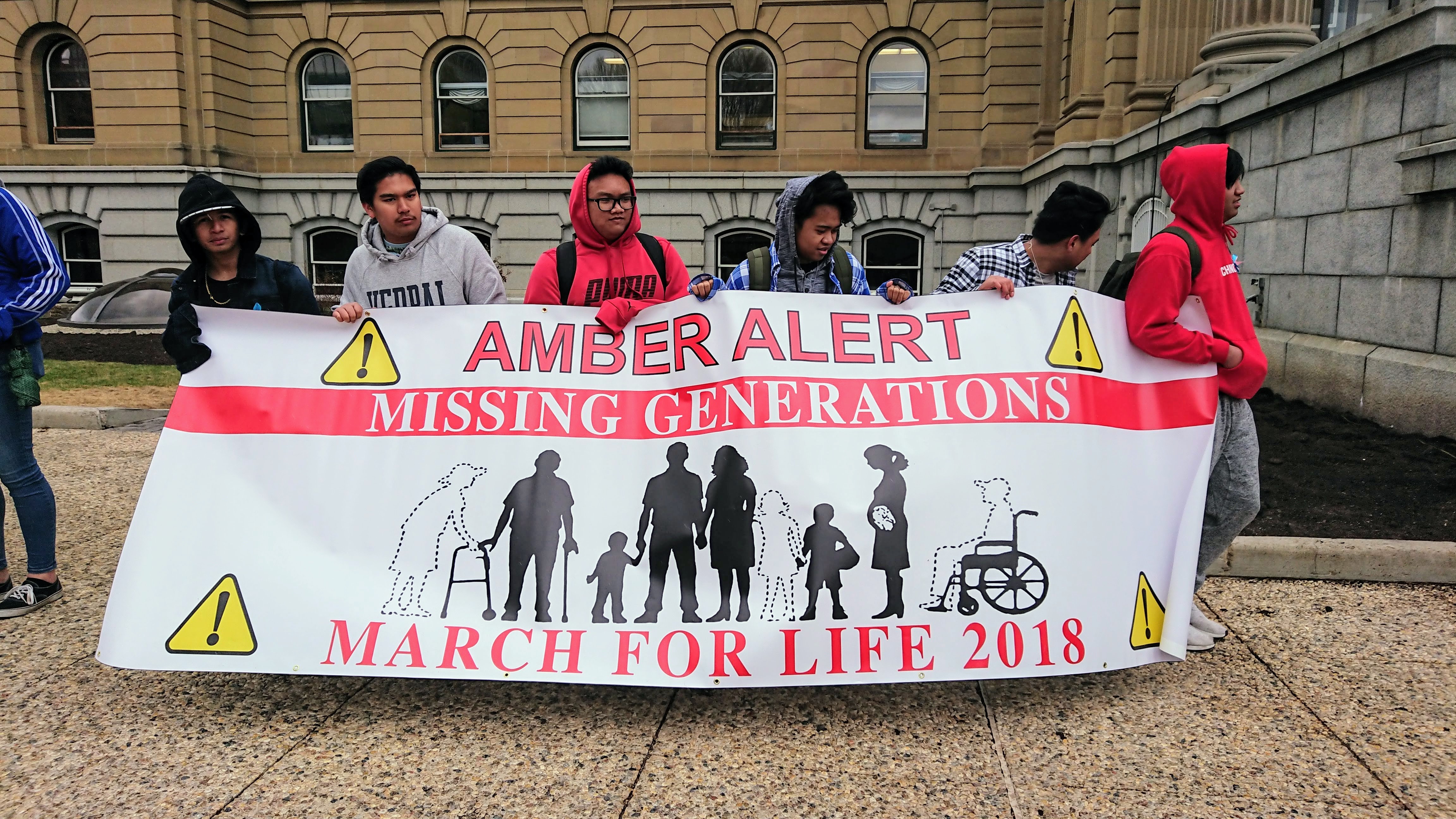 The March for Life is no longer only about abortion. Since the legalization of assisted suicide in Canada, the cause now includes those with disabilities and elderly who may consider euthanasia and assisted suicide. 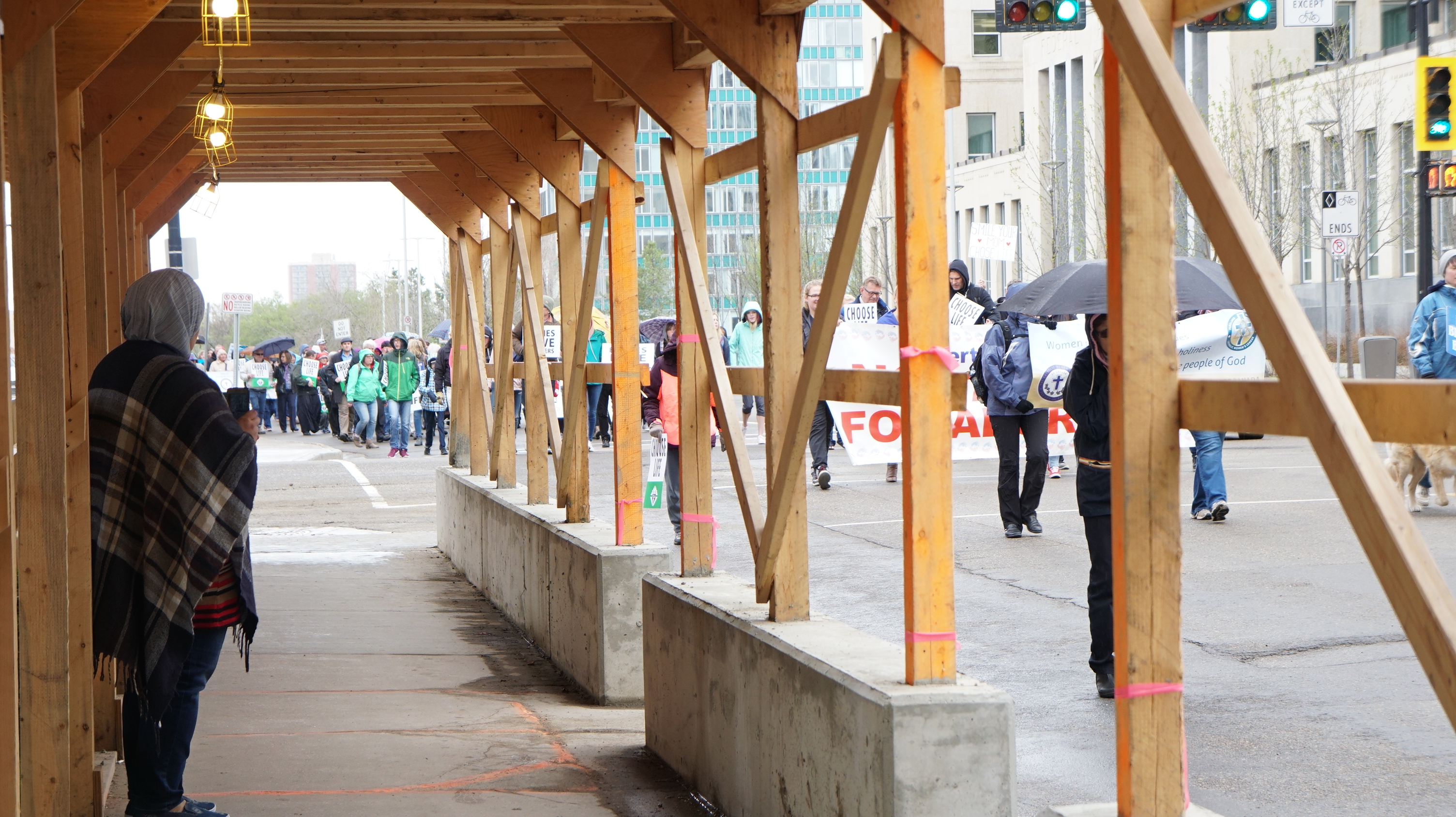 A woman records the Alberta March for Life using her smartphone. Many passersby downtown stood and watched or shared images using their phones. 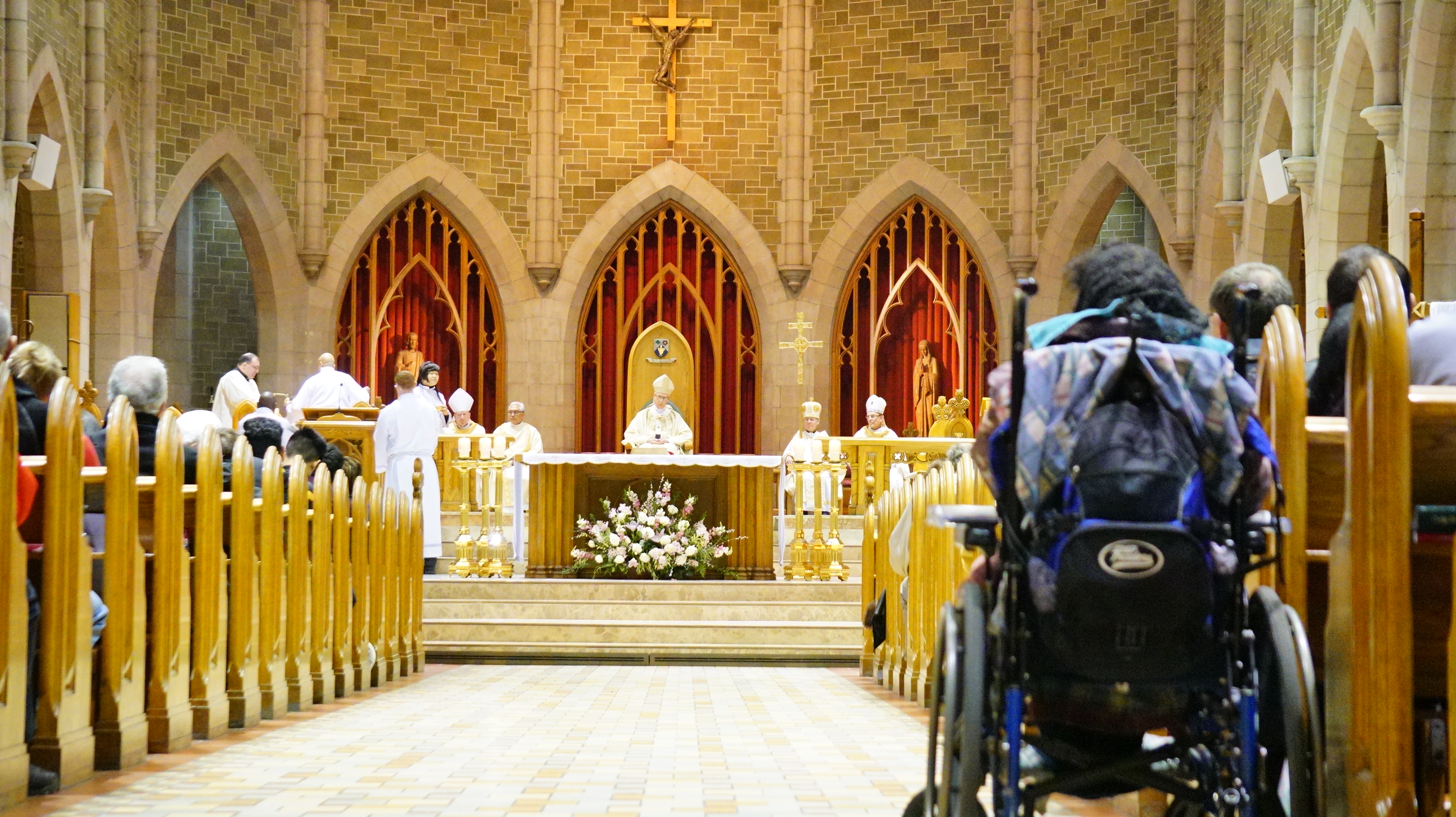 In his homily during the Mass for Life, Archbishop Smith said he shared grief with those with disabilities, as they are now burdened to consider assisted suicide. 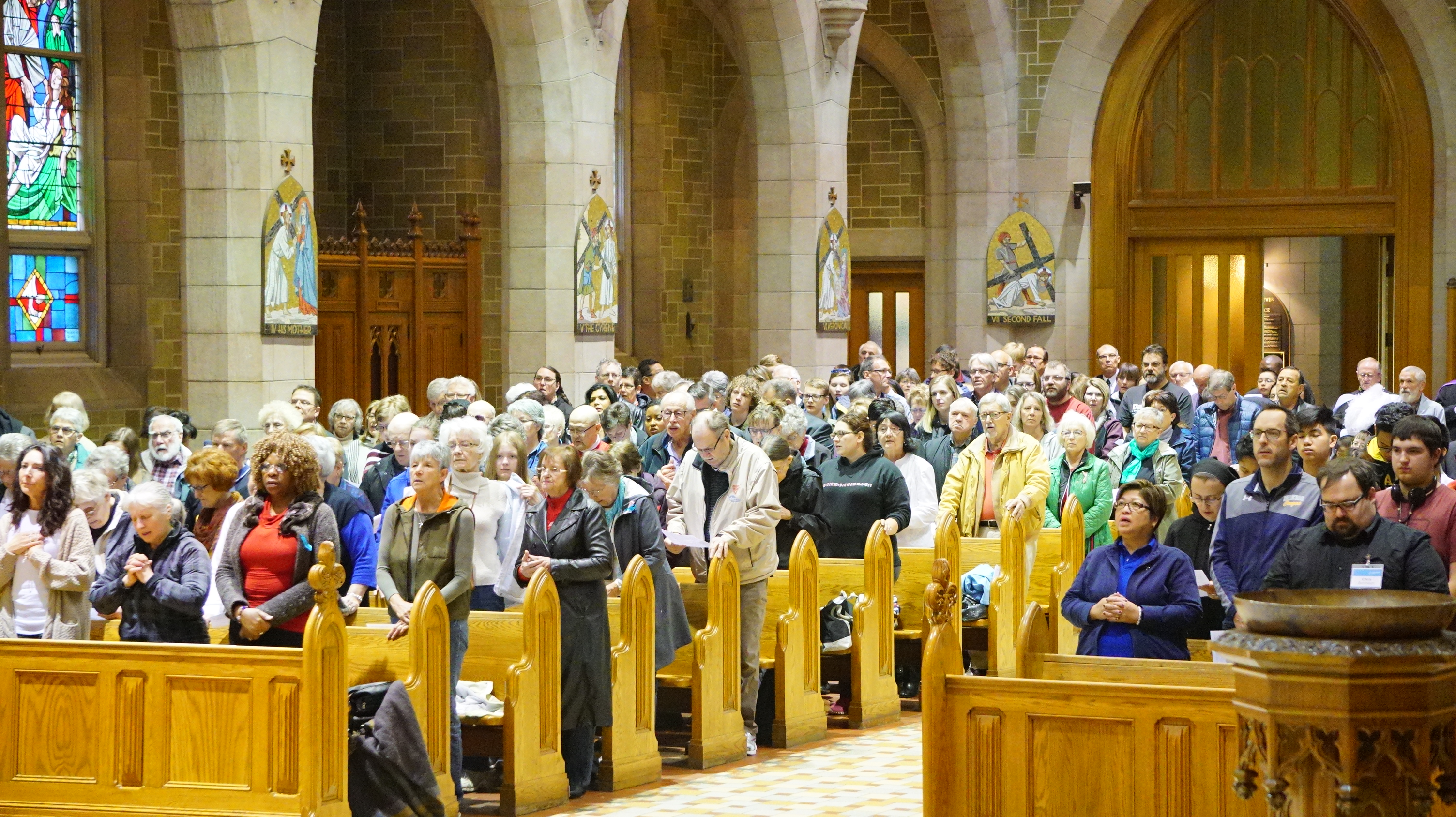 Hundreds gathered in the morning at St Joseph’s Basilica for the Mass of Life, proceeding the Alberta March for Life. 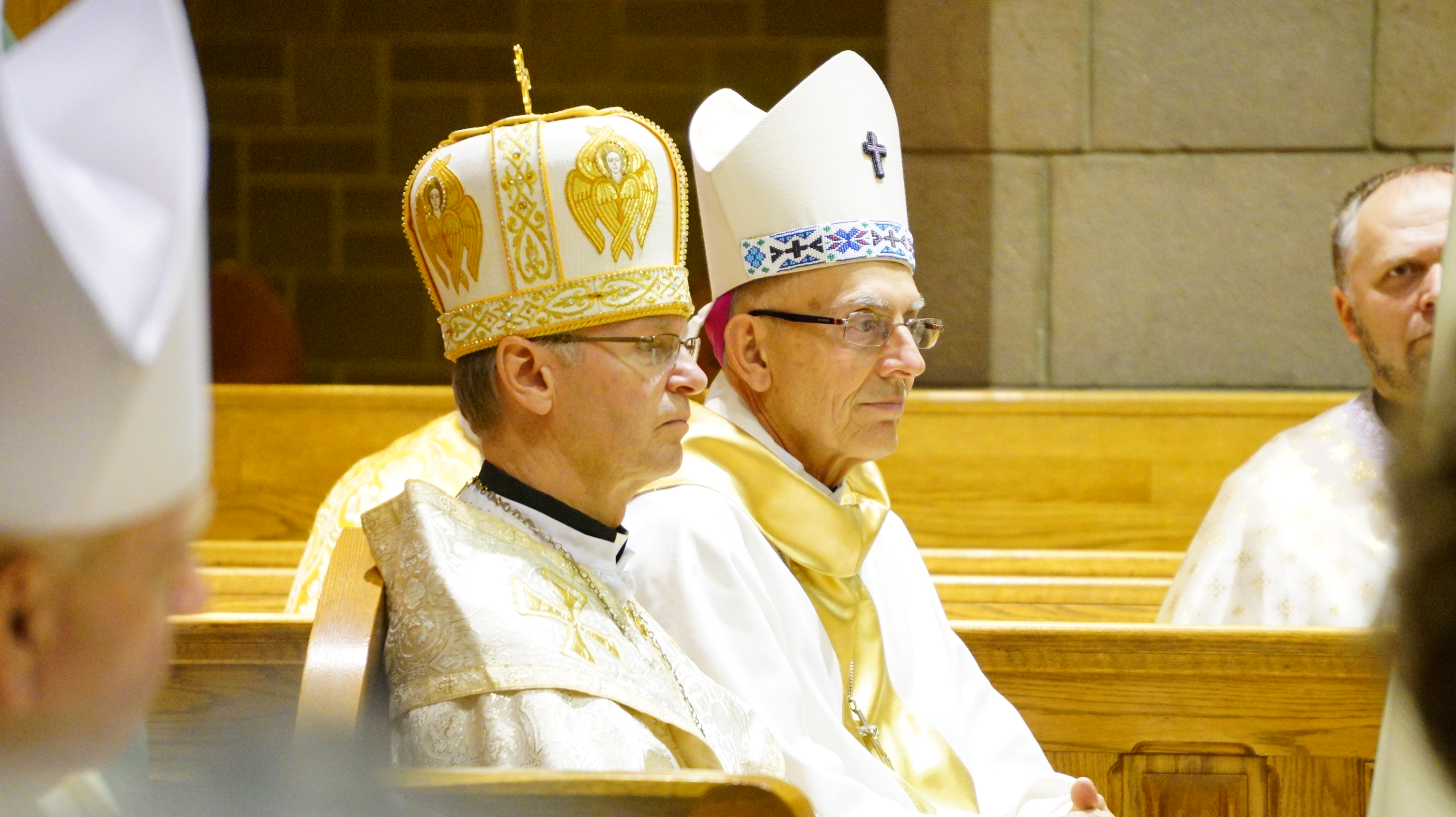 The original version of Bill 9 proposed a 50-metre protester-free zone. As of May 10, the bill had passed second reading in the legislature.

“If we can be trusted to exercise our rights and freedoms responsibly anywhere else in this city, why should it change just because we’re 50 metres away from an abortion clinic?” asked Amberlee Nicol, a member of the National Campus Life Network.

“I’m very disappointed that the government tries to dictate to us where we can have freedom of speech,” added Edgar Blais, suggesting “it’s just a matter of time” before the demonstration itself is threatened.

While pro-lifers from across Alberta marched through the rain-soaked streets, a smattering of pro-choice protesters walked through the crowd – including a group dressed as handmaids from Margaret Atwood’s dystopian novel about women’s oppression.

March for Life participants say they are undaunted.

“People think, ‘Oh, it’s just a thing of cells,’ but it actually is a human being,” said Tristin Van Leuwen.

“If you don’t think that, well, we do and we stick up for our rights.”

The parental rights of men must also be respected, said Blaine Breukelman.

“Even if they’re not married, it’s not like the woman conceived the child on their own. They both had a part in it, and both are family to this child,” he said.

“I wouldn’t necessarily say it’s a woman’s issue. It’s not only your body,” added Andrea Mul, a Grade 12 student from the Covenant Canadian Reformed School.

Edmonton Archbishop Richard Smith said he understands women who feel alone and grieve during their pregnancy, as well as women who regret having had an abortion.

“Yet, in the midst of it all, this grief does not turn to despair in our own lives, because we live the promise of Jesus himself, that this — even these terrible situations — can be for God an instrument for good,” said Smith during Mass before the start of the march.

*Correction Notice: An earlier version of this story quoted an organizer who estimated that 2,500 people attended the March. We’ve corrected this article with an updated number.

Video of Archbishop Smith’s homily at the Mass for Life.