Skip to content
The new Francis Xavier church has been both a blessing and a challenge, says Keith Elliott, vice-chairman of the building committee.Andrew Ehrkamp, Grandin Media

If you build it, they will come.

It’s a cliché, but it’s true whether it applies to a mythical baseball field or the new $17-million church at St. Francis Xavier Parish in Camrose. The new building has been attracting new families — and reinvigorating veteran parishioners — since it opened in May.

More than 100 people attend each Mass, including at least 35 to 40 children, and the numbers keep growing. A change in the Saturday evening Mass time to an hour earlier has encouraged even more.

The monthly Knights of Columbus breakfast easily serves 400 people, which was unheard of in the past. The parish hall was packed for a recent movie night featuring a film on St. Ignatius Loyola, a founder of the Jesuits along with St. Francis Xavier. There’s renewed interest in parish council membership, and the parish has launched a new catechesis program called Mary’s Lamb for Grades 4 through 6.

That enthusiasm is grounded in the new church building, a product of two decades of effort and fundraising. St. Francis Xavier is the newest church in the Edmonton Archdiocese after St. Stephen’s in Lacombe, which was dedicated in January 2018.

“We see a boom of people. Some of them maybe years ago they drifted away but they are coming back,” said Rev. Joby Augustin, the pastor at St. FX. “People come to me and say ‘Father, can I do this, Father can I do that?’ They are telling me ‘Father, we’ll do it. We can do it.’ ”

“It’s that whole notion of ‘Living in the Word,’ and if we are doing that properly, we are attracting people,” she said. “What are we doing so that people feel welcomed and feel accepted and feel loved? I don’t want to say the building is everything, but it’s a great way to start.”

The journey to this point was a long one. The idea of moving to a new church — and the fundraising for it — began 20 years ago. St. Francis Xavier Parish had outgrown its 1,207-square-metre building. Built in 1963, it was showing its age. It had poor bathroom and parking facilities. No handicapped access. The boiler needed repair and pews were cordoned off because the roof leaked.

“I remember going in on one Saturday to set up the altar for the Sunday and it was raining. Literally it was like a waterfall coming down in the sacristy,” Sommer recalled. “It was an amazing amount of water coming down.”

And there wasn’t enough room, she said. “In fact, there were times when one group would have postpone their meeting because the space was being used by another group,” Sommer said. “In terms of fellowship and being able to serve and gather as parish, there was no space.”

It reached a point where renovations were too expensive and a new building was needed. A 2002 fundraising drive raised an estimated $800,000, but plans were shelved with a change in pastors. Then, in 2009, the drive to build a new church went into high gear but not without challenges.

“We started looking for land in various places and couldn’t find anything,” said Keith Elliott, vice-chairman of the St. Francis Xavier building committee. “Everything that was offered to us was eventually sold out from under us.”

Land in Camrose was too expensive to buy or develop, but one parishioner, Orest Filewich, offered his land off 50th Street, and it was secured 10 years ago. Elliott called it “a steal” at $1.1 million.

Then came challenges with rezoning, Elliott recalled. A neighbour said that the proposed steeple of the new church cast a shadow on his house — even if it was only on a single day, according to computer modelling. “The day that it would cast a shadow was Dec. 23. And I just started to laugh. In Alberta, who is standing outside looking for shadows on Dec. 23?”

Other neighbours simply didn’t want a church. “The real sad story [was that] the guy that owned that [neighbour’s] land used to bring his mother to church all the time,” Elliott said.

Nevertheless, Camrose city council approved the rezoning in 2012 with some unlikely help from an engineering firm hired by opponents of the new church.

They told the councillors, “Here’s what we’re going to tell you, you should do,” Elliott recalled with a laugh. “Nobody tells city council in a rural area ‘This is what you’re going to do.’ I almost stood up and said ‘Hallelujah!’ That was the end of it. We won.”

The cost of the building is an estimated $17.5 million. St. Francis Xavier Parish raised $6 million through equity in the old church, previous money raised, as well as ongoing bequests and the donations. The remainder will be financed. It’s a large amount of debt, but Elliott said it’s worth it.

“We’ll pay off the debt,” he said. “The beauty of it is, we’re enjoying the building while we’re doing it.”

Construction started in April 2017. The parish received the keys to the new church in May. At more than 3000 square metres, the new building includes a nave that can seat 650 and a parish hall that can seat 360. In fact, the Saturday evening Mass time was changed to accommodate wedding parties.

The new church includes building materials that honour its namesake, St. Francis Xavier, including ruby red granite from India, where St. Francis was a missionary, and an altar of white marble from Namibia, the southwest African country Xavier passed through on his voyage from Spain to India.

The spire stretches 34 metres to the base of a 226-kilogram stainless steel cross. Inside, the baptismal font, located at the entry to the nave, is a nod to St. Francis Xavier, who baptized 30,000 people before he died in 1552 on his way to missionary work in China.

The spire has 19 blue, red, white and yellow stained glass windows, symbolizing baptism, death, resurrection, rebirth and the new life baptism creates. They will be lit at night from the inside.

Three stained glass windows on the wall behind the sanctuary depict more of the life of St. Francis Xavier and the Jesuit order he co-founded. The seven-metre centre window depicts St. Francis Xavier holding a cross. Below and on each side of him are images of people from India, Japan, Indonesia, and St. Kateri Tekakwitha, the first Indigenous saint of Canada, who was evangelized by the Jesuits.

And the church has meeting rooms — lots of them — unlike the old building.

“It’s hard to keep enthusiasm going when you say ‘You can’t have a meeting tonight to do that because we don’t have room for you to have your meeting’ or ‘We can’t have children’s liturgy because it really is a fire trap upstairs.’ That turns people off,” Elliott said. “Now we’re here, we can say ‘What do you want to do?’”

At just over 18,000, the population of Camrose and the Catholic community has been growing steadily with a growing number of immigrants, young families with children and seniors moving in from rural areas. The St. Francis Xavier congregation has also grown, bolstered by refugees and immigrants. The parish has sponsored 18 refugees and applied bring 20 more to Camrose.

St. Francis Xavier has 1,200 registered families. The mission parishes of St. Peter and Paul in Hay Lakes, St. Stanislaus in Round Hill, St. Thomas in Duhamel, and St. Joseph in Bawlf are also under the care of St. FX.

“We want to really address the needs of young families and bring more of those folks into our building and support what they are wanting for their children,” Sommer said. “We have this way of being in community and being able to live our faith that we did not have the opportunity to do before.”

Elliott said critics now see the need for the new building, with a new pastor, and a new perspective.

“It’s a change in attitude,” he said. “Father Joby has come in and brought a fresh spirit and people have taken to that. Not only are we in a new building but we have a new priest, and he’s young. It’s the leadership at the top that says ‘Hey, we can all do this together.’ ”

A spirit of hospitality is reflected in simple things — like nametags, ushers who are welcoming, providing meeting rooms and facilities, and saying ‘yes’ to new programs focused on community — that can be applied in any parish, whether they have a new building or not.

“Every church can do the same thing,” Augustin said. “It’s reaching out to the people and giving them a sense that church is not just for Mass alone. It’s a kind of family.”

Parishioners conduct tours of the new building while explaining the connection to St. Francis Xavier. The new building will get people in the door, but then the work starts in earnest, Sommer said.

“We want to have a parish where our parishioners are involved beyond just attending Mass. That’s what we want. Initially some may come because it’s a novelty and a new building, but we want to keep them.”

She explained that’s done by asking “How are we living the Word? Are we learning the Word and then are we living it? It’s one thing to speak about it but, feet on the ground, what are doing? How are we living our lives so that is attractive to people, so they say ‘I want what you have. I want that for my kids.’”

“I hope we don’t lose our sense of awe of what we’ve got happening here. People are excited to come in and want to be involved…it’s just going to get better, I think,” Sommer added. “The excitement is the potential for what we can do in this building, how we can grow as a parish.” 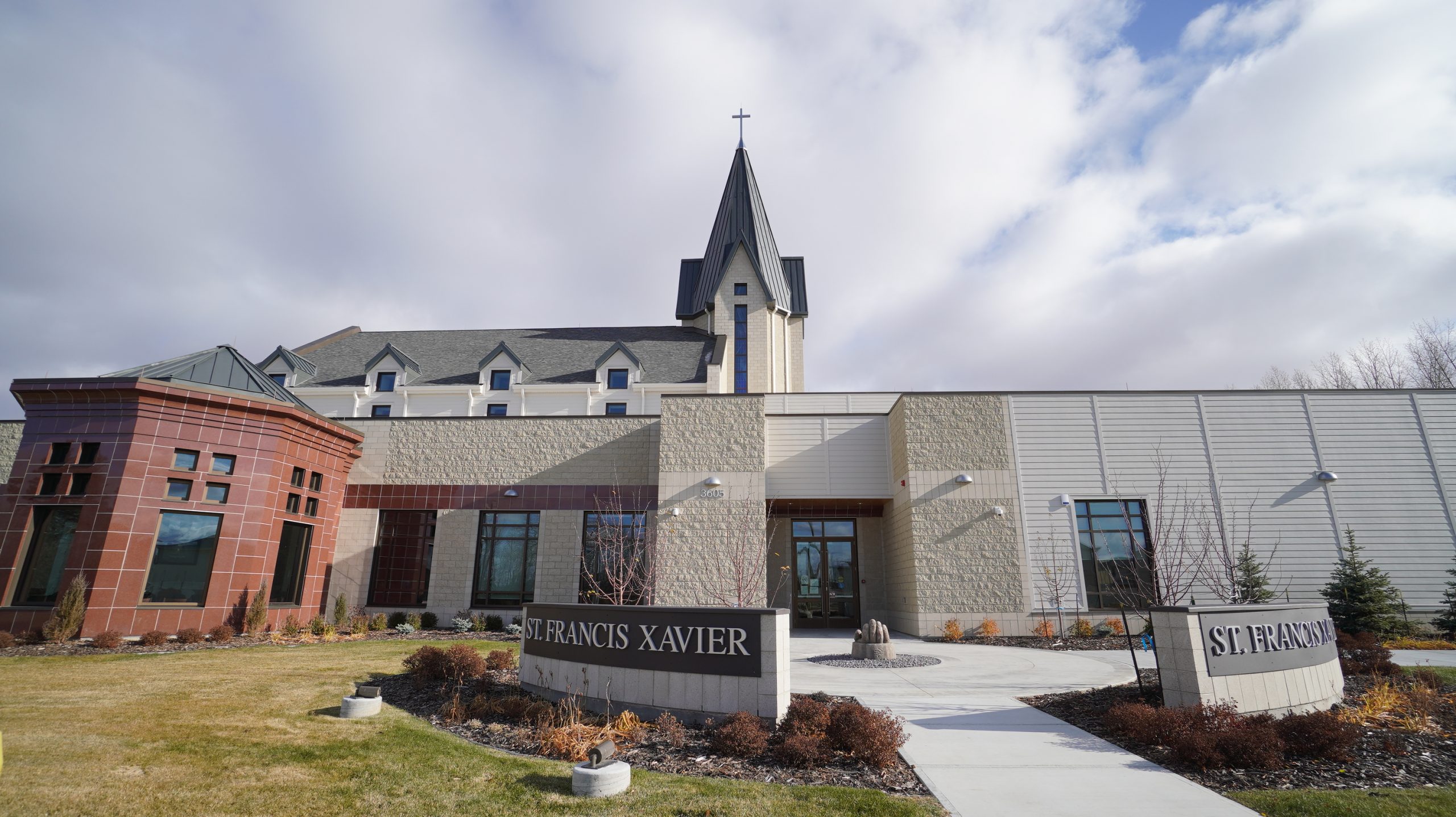