Skip to content
Newman Theological College (NTC) convocated 34 new graduates on October 16, 2017. NTC's mission is to offer academic preparation for the priesthood, as well as theological studies for lay people, at all stages in life.
Brother Benjamin Ripley receives the Joseph N. MacNeil Outstanding Achievement Award for academic excellence and commitment to Newman Theological College. Ripley served as vice-president of spiritual life for the Newman Students’ Association during his last two years of study.

Brother Benjamin Ripley is a Franciscan friar planning a career as a chaplain.

Beth Pecson is a Catholic teacher hoping to be a stronger role model to her students.

Both are among this year’s 34 graduates of Newman Theological College, and they illustrate well its mission to offer academic preparation for the priesthood, as well as theological studies for lay people, at all stages in life.

“We want to make sure that it’s not a secret,” said college president Jason West, “that it becomes better known and that there’s more opportunities for people to encounter the college in different ways at stages that are suitable for where they’re at, both in their faith journey and also in the practical time that they have available for deepening their understanding of faith.”

The number of Newman graduates has doubled over last year, including a large group of teachers from Edmonton Catholic and other school districts in Alberta. Another nine teachers from Saskatchewan Catholic schools will be graduating from Newman in May 2018.

Beth Pecson hopes her students at Monsignor Fee Otterson Elementary and Junior High School will take a lesson from her efforts to obtain a master of religious education degree and enrich her current role as a music teacher and chaplain.

“I would like for them to see that learning doesn’t end,” she said, as students from her school’s junior high glee club performed at the Oct. 14th Convocation Mass for Newman graduates.

“It’s lifelong, especially if you’re trying to learn about your faith,” said Pecson, who has been teaching for more than 24 years. “It’s a neverending journey, and it doesn’t matter where we are; there’s always room for growth and there’s room for excellence in that pursuit.”

Pecson received the 2017 Emmaus Award, given to the student who comes to recognize Jesus more clearly while fostering community in their learning environment.

“The one core idea that stood out to me the most, just looking through that salvation history, is how merciful and loving our God is,” she said. “Newman is such a gift to our Catholic community.”

Other grads, such as Brother Benjamin Ripley, are just kicking off their careers.

Ripley is completing a placement as a student chaplain at St. Joseph’s Auxiliary Hospital, a long-term care facility in south Edmonton. He hopes to use his master of divinity degree from Newman to become a hospital chaplain.

“What’s been given to me is very valuable and very rewarding, to be able to take what I’ve learned here and to apply it wherever I end up in the Church and in my order,” he said. “What’s given to you is a solid grounding in our faith. Whatever you do with your degree, you’re richer for it.”

Ripley received the Joseph N. MacNeil Outstanding Achievement Award for academic excellence and commitment to the college. He served as vice-president of spiritual life for the Newman students’ association during his last two years of study.

Ripley said he enjoyed the mixture of clergy and laity in his classes at Newman.

“I think we need that dynamic within the Church,” he said. “For me, it gives a perspective of how the laity wants to serve the Church and how they want to be a part of it. They provide a different view of what Church is and what it should be.”

A wife and mother of four, Pecson relied on the moral support of her classmates — many of whom were also teachers, holding full-time jobs and raising families.

She’s also grateful for the support of the Otterson school administration, especially principal Marie Whelan, during her years of study at Newman.

“I truly stand in awe of her commitment to Catholic education,” Whelan said.

“I wanted to be able to support that as a principal, give her that opportunity to explore and to go out and deepen her faith at Newman, because I have such a high regard for her as an educational leader.”

West said enrolment has been climbing steadily due to new programs, including one for the formation of permanent deacons, greater interest in online programs, and strong enrolment from the seminary and school districts. 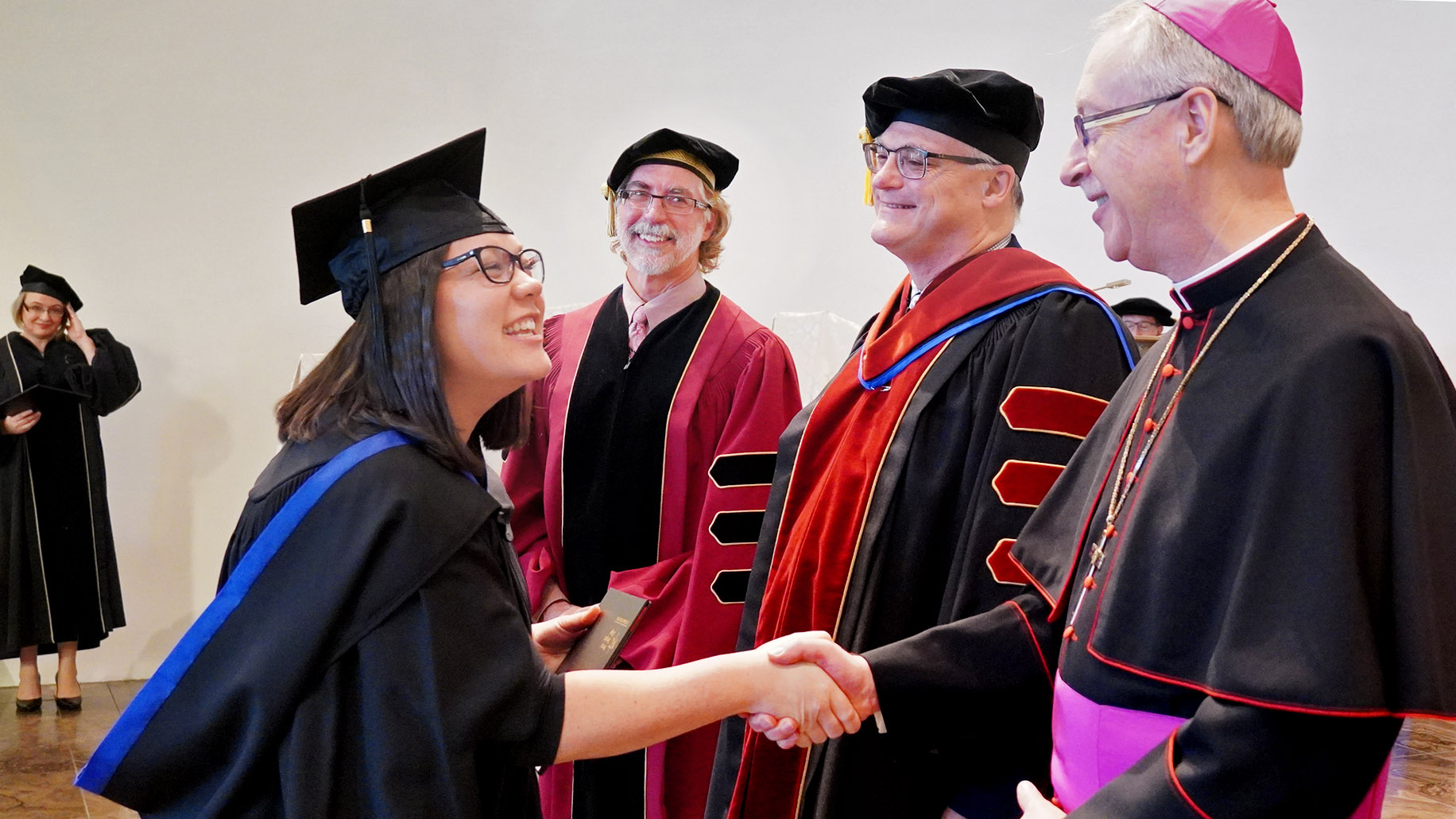