This year’s No Room in the Inn campaign hopes to raise money to support two Catholic Social Services women’s shelters in Edmonton — at a time when domestic violence incidents are on the rise.

No Room in the Inn is an annual Christmas season ecumenical appeal by the Edmonton and District Council of Churches, based on the biblical story of Mary and Joseph on the night Christ was born.

Over 20 years No Room in the Inn has raised more than $1 million to help those who lack adequate and safe housing. 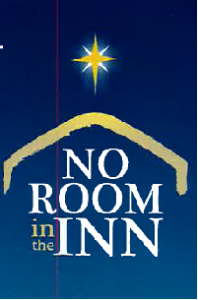 At St. Katharine Drexel Place, a third-stage shelter, No Room in the Inn funds will be used to increase outdoor privacy to protect the safety of client families. At the LaSalle second-stage women’s shelter, the money will be used for a playground outdoors and a play area indoors.

That opportunity for kids is integral to their healing.

“Think about the idea of a child growing up vulnerable, living in an abusive household, perhaps physically abused, perhaps psychologically abused, scared, who comes into the shelter. Kids are often unable to speak. They’re not able to articulate what happened,” said Eoin Murray, the director of development for Catholic Social Services.

“They tend to be young kids. Play becomes the way in which they can re-emerge into the world. The earlier that you intervene in a child’s life to give them happy, positive, constructive experiences, the better they are able to deal with the trauma.”

The No Room at the Inn funds help, but CSS will still need to raise a total of $80,000 from other sources. The timeline for the build is for work to begin in the summer of 2021.

Domestic violence shelters were chosen as this year’s recipients, in part, because of the increase in incidents due to the isolation and social factors brought on by the COVID-19 pandemic, said Julien Hammond, the chairman of the No Room in the Inn campaign committee.

Community groups warned of a worsening ‘shadow pandemic’ of domestic violence amid COVID-19.

Edmonton police report domestic violence-related calls have risen 16 per cent this year. According to EPS, there were 8,087 of domestic-violence related crimes in the city between Jan. 1 and Nov. 15, including assaults, family disputes, breaches of court orders, and break-and-enters.

“The driving force is often that they have a home but they’re not safe in their home,” Murray said.

“It means they are forced out onto the streets; or living in a car; or staying at a friend’s house or apartment; living on the couch; and so the kind of homelessness that women and kids experience is quite different from what you would see as you walk through downtown Edmonton.”

Twelve women and 14 children are living at the La Salle Shelter and Drexel Place is home to 16 women and 15 children. CSS says demand has increased since COVID-19 began, currently the agency is housing overflow from La Salle in unfunded apartments.

The location of the LaSalle and Drexel Place shelters is not made public to protect the resident families.

COVID-19 has introduced quite a number of challenges, so this year the campaign is online. Donations can be made at www.canadahelps.org/en/dn/m/55480. It’s a first for the No Room at the Inn campaign, and organizers hope for community support.

Although it’s a Christmas campaign, donations will be accepted until April 30.

Lots of charities, including CSS’s own Sign of Hope campaign, are competing for funds from a shrinking total amid the COVID pandemic. In some cases, donors are becoming clients, while others are increasing their charitable giving to meet the growing need.

“In COVID, we’re all in the same storm but not in the same boat,” Murray said. “Those people who are in a financial position to give, what we’re seeing is that they’re giving a little bit more.”

“What we’re talking about is a young, vulnerable woman carrying a child, homeless, uncertain about where she would be able to go to give birth and where it would be safe for her and her family. Thankfully in a relatively good and happy and healthy relationship although for anyone at that moment in their life it’s a confusing time, and it’s probably particularly confusing when you’re traveling from one end of a place to another, from the northern area of Israel down into Bethlehem,” Murray said.

Last year’s campaign raised more than $45,000 for upgrades to the Seniors’ Safe Home in Edmonton.

Michele Graham, director of the Seniors’ Safe Home, said the funds will replace bathtubs with showers for residents. Without No Room in the Inn, Seniors’ Safe Home would be unable to do those renovations, since they aren’t covered by any provincial funding.

Past No Room at the Inn campaign recipients include Hope Mission, L’Arche Association of Edmonton, Wings of Providence — a shelter for women — and in 2018, Youth Empowerment and Support Services.

No Room in the Inn was started by the Edmonton District Council of Churches. Participants include both Roman and Ukrainian Catholics, Anglicans, United, Lutheran, and Quaker congregations.

The Archdiocese of Edmonton was one of the founders of the No Room at the Inn Campaign in 1999, when the initial meeting of the Edmonton and District Council of Churches was held in its assembly hall.

Sheedy: St. Joseph is a guide to being an everyday saint