Skip to content
A new Statistics Canada report shows that more than one in every 100 deaths in Canada is administered by a doctor,iStock

More than one in every 100 deaths in Canada is administered by a doctor, according to the latest national statistics on euthanasia and assisted suicide.

But the actual number is likely higher when factoring in parts of the country that currently do not report medically-induced deaths.

The latest statistics are contained in the Fourth Interim Report on Medical Assistance in Dying in Canada, published by Health Canada. It will be the last one to deliver incomplete numbers that omit Quebec and offer no reasons why patients are seeking medically-administered death.

In the 10-month reporting period between Jan. 1 and Oct. 31, 2018, there were 2,614 medically-administered deaths in Canada, excluding Quebec, the Northwest Territories, Yukon and Nunavut.

Since euthanasia was legalized on Dec. 10, 2015 the total national number stands at 6,749, again excluding Quebec and the territories.

The report concludes that “Canada’s percentage of medically-assisted deaths (as a proportion of total deaths) increased only slightly since the last reporting period.”

While Health Canada may find no cause for alarm, Canadian Catholic Bioethics Institute executive director Moira McQueen is concerned.

“That’s one in every 100. And if it’s higher than that — which everybody thinks it is because of the non-reporting parts (of the country including Quebec, the Yukon, the Northwest Territories and Nunavut) — you’re maybe talking about one in 50,” McQueen said.

“That’s actually quite a lot.”

McQueen is worried by the relatively young age of people requesting medical deaths. The statistics indicate a drop in the median age from 73 to 72.

“Why do some patients go this way, especially in their early to mid-70s?” she wonders.

While requested deaths for most age groups remain around one per cent, nearly two per cent of deaths in the age group 65-70 were medically induced, according to the report.

There are other significant divergences between patients who choose euthanasia and the rest of the population. Only 44 per cent of patients choosing a medical death die in a hospital, compared to 60 per cent of the general population, according to Statistics Canada.

While only about 30 per cent of Canadians die at home (according to the Canadian Hospice Palliative Care Association), 42 per cent of induced deaths occur in people’s homes.

A disproportionate number of euthanasia requests seem to be coming from Canada’s shrinking small-town and rural population.

While more than 82 per cent of Canadians live in cities of 100,000 people or more, only 56 per cent of requested deaths are in big cities.

At this point the figures fail to indicate if people are choosing euthanasia because they want to die at home, or whether that option becomes more appealing in parts of the country where palliative care is harder to come by, said McQueen.

“Good palliative care is available,” said McQueen. “And the point is that there needs to be more available in places where it’s not.”

When the next report comes out in the spring of 2020, McQueen looks forward to more complete reporting about the reasons people are choosing to die by lethal injection.

“The statistics don’t reveal what I am calling the existential questions. They really don’t,” she said. “That’s a problem.” 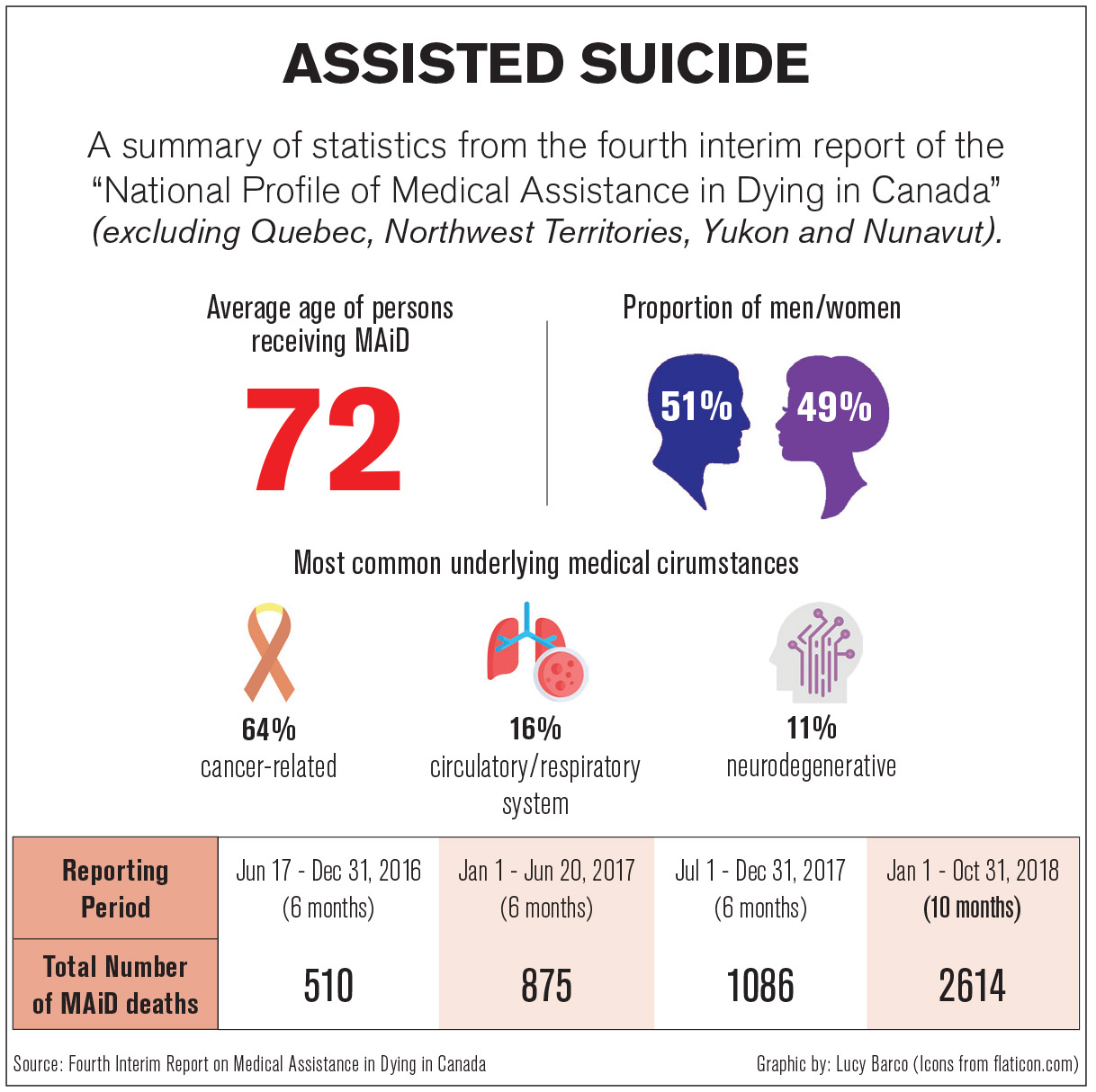 Rolheiser: It is healthy to love your life