A much smaller group of pilgrims than usual is heading off to World Youth Day from Edmonton next week. But the anticipation is huge.

“I am nervous and excited,” said Ann-Maria Au, who will be attending her first World Youth Day (WYD) in Panama. “Excited because this is my first time going on a pilgrimage and backpacking but also eagerly waiting to see what the Lord has in store for me during this trip,” said Au. “Nervous because I am an introvert  ̶  so being with people 24/7 and being surrounded by crowds isn’t an ideal situation for an introvert.”

Au is part of a group of 25 pilgrims going to Panama with the Archdiocese of Edmonton group, from St. Joseph’s Basilica and Holy Rosary Polish parishes in Edmonton, and Holy Trinity Parish in Spruce Grove.

They will join at least 1,300 Canadians in Panama City as WYD celebrations begin Jan. 22. More than 200,000 pilgrims from 155 countries had completed or were in the process of registering for the event as of Jan. 10.

The Central American country is ready to welcome thousands of young Catholics to World Youth Day, an international gathering of young adults that began with Pope St. John Paul II in 1986.

Alberta has a particularly small contingent this year, mostly due to the change in timing to January rather than the summer break. Previously, 250-300 pilgrims have attended from the Archdiocese of Edmonton alone.

World Youth Day at Home (WYDAH) is open to ages 18-35. It features speaker Colm Leyne from the Diocese of Saskatoon. The day will also include video highlights from Panama, an evening Mass with Reconciliation before, a dinner, and a social.

For those who are unable to travel to Panama, the Archdiocese is offering an alternative celebration of faith, World Youth Day at Home, on Jan. 26 at St. Theresa Parish in south Edmonton.

No pilgrims are attending with the Alberta dioceses of Calgary, Grouard-McLennan, or St. Paul.

Two priests and two religious sisters will be joining the young professionals and students in the Edmonton contingent.

“We are all coming from different backgrounds and parts of our lives but this will really allow us to really be with God’s people and walk with each other just like how the apostles did,” said Au, whose group will be led by Father Roger Niedzielski, an associate pastor of Edmonton’s St. Joseph’s Basilica.

Niedzielski attended WYD in Kraków for the first time in 2016, as a deacon. He was ordained a priest in 2017.

“It was both amazing and also a little scary with just so many thousands of people, but wonderful at the end of it,” said Niedzielski. “So much so that it convinced me to go again.”

Niedzielski relished the experience of encountering so many young Catholics from different walks of life and different countries.

“Walking down the street and hearing so many different languages being spoken  ̶  but they’re all sort of connected to the fact that they’re praising Christ or coming here to encounter the Lord and deepen their faith, deepen their encounter, discern what their calling is in life,” said Niedzielski. “It’s a powerful moment of the universal Church to know that we’re not alone in our little corner of the world.”

The atmosphere can’t be matched by anything outside WYD, said Simon Bamburak, World Youth Day coordinator for the Archdiocese.

“I think the biggest reason to attend is to see that there are other young people out there around the world with the same religion, same beliefs, searching for the same thing. The power of that, the atmosphere, you can’t replicate it that anywhere else,” said Bamburak, who will be attending his fifth WYD this year.

The traditional 15- to 35-km walk to the site, in temperatures expected to range between 30 and 45 degrees Celsius, will be the biggest challenge, said Au.

“This walk has daunted me so much that I actually trained over the summer by walking at least 15 km with weights in my backpack,” said Au.

A couple months ago, she faced a setback when she injured her hip. Her therapist has helped her try to get back in shape as much as possible for the walk to the vigil site.

“I know there will be times I want to complain or give up, especially with a 44-litre backpack on me and overbearing heat that I’m not used to,” said Au. “But I really hope that God gives me the grace and diligence to keep going. I do have a plan to pray for people’s intentions throughout this walk so it motivates me to keep going.”

The vigil Mass is Bamburak’s favourite memory of past WYDs.

“You walk 15 km and to get there you have to scavenge for food, stay up, sing, pray together, go to Confession. It’s just an amazing experience,” he said.

A send-off Mass with Archbishop Richard Smith is scheduled in the chapel of the Archdiocese’s Pastoral & Administration Offices, at 8421 – 101 Avenue, at 4 p.m. on Jan. 12.

World Youth Day at Home (WYDAH) is open to young adults ages 18-35 and will feature speaker Colm Leyne, a young adult ministry leader from the Diocese of Saskatoon. The day will also include video highlights from World Youth Day attendees from Panama, an evening Mass with an opportunity for Reconciliation before, a dinner, and a social.

The alternative celebration of the young people’s Catholic faith is also meant to point to the “daily pilgrimage” of the whole Church, said coordinator Twyla Lapointe, who is also the young adult coordinator at St. Theresa’s.

“I was hoping to find a way to fill some of that gap for this particular WYD this year,” said Lapointe.

“We are still on the pilgrim way right here at home,” said Lapointe. “The world is your ship and not your home,” she added, quoting St. Therese of Lisieux.

“We belong with the saints in heaven but our journey here on earth is an incredible opportunity that God gives us to go through the steps like prayer and devotion to the sacraments on a daily basis and also the witness of our daily lives: other people knowing and understanding that you’re on a journey, being a witness to our faith.”

Organizers are hoping for 100 or more people to attend. Registrations were just over 30 as of Jan. 10.

Both World Youth Day and WYDAH are opportunities to connect with other Catholics at a time when the Church is under attack, said Lapointe, who has felt pressure from the clergy sex abuse crises, challenges to the legitimacy of Catholic schools, and Church teachings on sexuality.

“It’s a wonderful opportunity to connect and remember our unity, that we’re not alone or isolated, because sometimes it can feel that way when the Church is under attack,” said Lapointe. 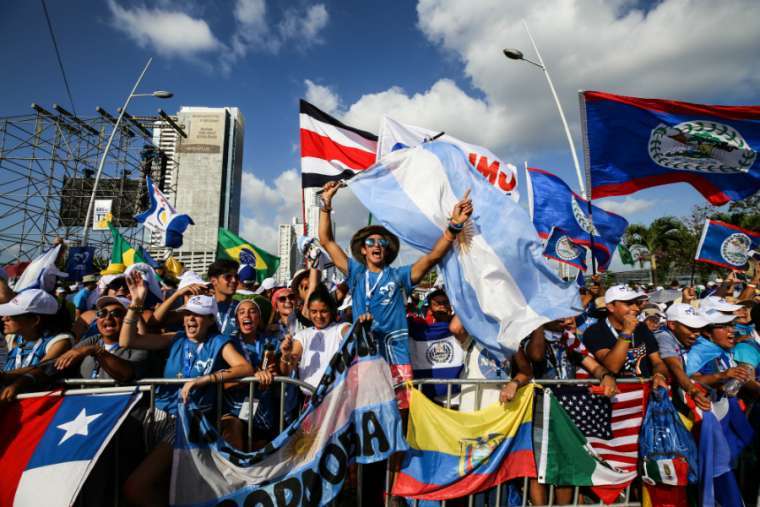