The braintrust behind the pro-life movie Unplanned say they are ecstatic with attendance figures from the 49 Canadian screens that showed the movie during its one-week run in Canadian theatres.

“That’s a tremendous draw and was actually the second highest per-screen average for any film, anywhere in North America,” Chuck Konzelman, writer and director of Unplanned, told Canadian Catholic News in an e-mail.

Konzelman believes even more people would have seen the film had some multiplexes not underestimated the demand.

“The average would have been higher if some of the multiplexes, which weren’t sure how much demand there would be, hadn’t booked us into their smallest auditoriums,” he said.

“Many of the shows on Friday and Saturday night were 100-per-cent sold out and potential audience members got turned away.”

“It’s overwhelming to be a part of this international movement,” said B.J. McKelvie of Cinedicom, the Canadian distributor of the movie, who is also a pastor in Fredericton, N.B.

“Against all odds we successfully brought Unplanned to the people of Canada.”

The film tells the story of Abby Johnson, a former Planned Parenthood clinic director in Texas who had a change of heart after witnessing an abortion via an ultrasound. She is now a strong proponent of life through a ministry called And Then There Were None, which helps help abortion clinic workers transition out of the industry. She has plans to bring a chapter to Canada.

Since its release in the United States in March, Unplanned has taken in more than $18 million at the box office. But it had trouble getting released in Canada because producers could not find a Canadian distributor until McKelvie stepped up.

Protests greeted the showings at a number of locations across the country, and two independent theatre companies cancelled showings after managers and owners received death threats, according to McKelvie.

Cineplex Odeon and Landmark Cinemas, the two largest theatre operators in Canada, stood firm in showing the film. Cineplex president and CEO Ellis Jacob said his company showed the film in 14 of its 1,700 auditoriums to stand up for freedom of expression.

“In this instance many of us have had to set aside our own personal beliefs and opinions and remember that living in a country that censors content, opinions and points of view because they are different from our own is not a country that any of us would want to live in,” said Jacob in a statement. 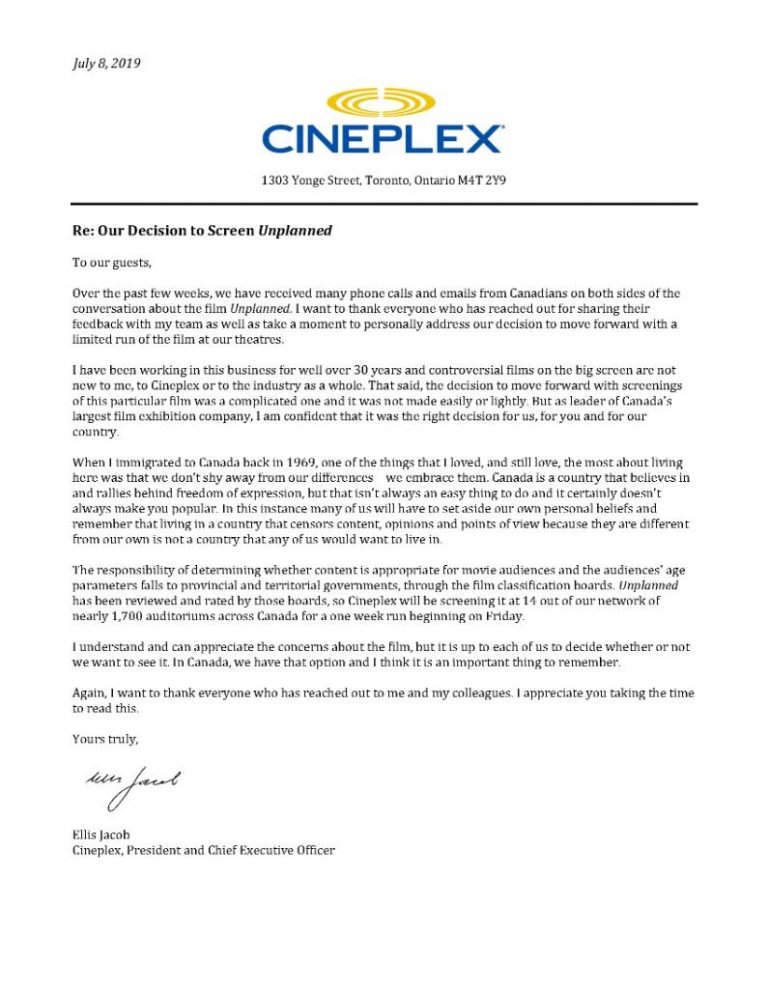 The Abortion Rights Coalition of Canada released a statement in late June calling the film “a dangerous piece of anti-abortion propaganda” and claimed it might incite violence against abortion providers.

Federal Liberals have waded into the controversy and attempted to turn it into an election issue. Melanie Joly, Minister of Tourism, Official Languages and La Francophonie, called out Vince Guzzo, owner of Quebec-based theatre chain Cinema Guzzo, for showing Unplanned and linked it to Opposition Leader Andrew Scheer and the federal Conservatives, saying they are “showing their real colours again.”

Guzzo is a Conservative fundraiser. Prime Minister Justin Trudeau’s chief of staff, Katie Telford, also condemned the film via Twitter, saying “this is happening, at least in part,” with the support of “federal Conservative politicians.”

A small group of protesters demonstrated against the screening of Unplanned outside the South Common Cineplex on Opening Day July 12.Lincoln Ho, Grandin Media

Konzelman said these claims and others that the film deliberately courted controversy were simply untrue, and the numbers show there is an audience for this kind of message.

“Despite being vilified by the mainstream press — and Canada was particularly rough on this count — there were audiences in both the U.S. and Canada eager to see this film,” he said.

Though the coverage was tough, the controversy did help create a buzz around the film.

“It helped to create a level of awareness among people at large that we couldn’t have achieved with our modest advertising budget,” he said.

Unplanned continues its run until July 25 at two independent theatres, in Steinbach, Man., and Clarenville, NL. McKelvie said the film is being made available to groups interested in screening Unplanned as a fundraiser. Receipts would be split 50-50 he said.

The producers have also started a GoFundMe page to raise $2 million (U.S.) to fund foreign distribution. As of July 23 it had raised just over $40,000.