Skip to content
St. John Paul II walks alone through the autumn woods of Elk Island National Park while praying the rosary during his visit to Alberta in 1984.ARCAE/L'Osservatore Romano

It’s arguably one of the most famous photos ever taken: St. John Paul II, dressed in his white papal cassock, walking alone through the autumn woods of Elk Island National Park as he prayed the rosary.

But it almost didn’t happen. The pope’s visit to Alberta in 1984 was supposed to include a trip to the Rocky Mountains, but high winds nixed the helicopter flight.

The Holy Father, an avid outdoorsman, was obviously unhappy about that, recalled his host, the late Edmonton Archbishop Joseph MacNeil.

As an alternative, MacNeil suggested a walk at Elk Island National Park west of Edmonton, and the pope readily agreed. Since the trip was unplanned, it was just Archbishop MacNeil, the pope and his secretary who drove there in a limousine, accompanied by a couple of police officers on motorcycles.

As they strolled along a path, the two bishops had a frank conversation covering a wide range of topics, from the tracks left by the park’s bison to ways of avoiding photographers.

At one point, Pope John Paul II sat on a park bench with his breviary. Later, he took that rosary walk through the woods, and the moment was captured for the world by Vatican photographer Arturo Mari.

The power of the image lies not in a portrayal of one of the most famous figures in history, as the leader of roughly 1.2 billion Catholics around the world, but of a priest who could completely focus on an individual in person one minute and on God the next.

Thirty-five years later, the memories of John Paul II’s visit to Edmonton are still fresh. Sister Roma De Robertis, a former writer with the Western Catholic Reporter, was pressed into service to cover one of the biggest assignments of her journalism career.

“Overall it was joyous, exciting, (a time of) gratitude and one of unity  ̶  people of different walks of life and generations coming together,” she remembers. “I wanted to do a good job, but then it went so much deeper than that. I received this as a great gift for the rest of my life too. And I believe other people too, whatever their motivations for coming out, I felt there was a great spirit of unity.”

For 12 days, Pope John Paul II toured Canada, starting in Quebec and stopping in Toronto, St. John’s, Moncton, Halifax, Midland, Ont., Winnipeg, St. Boniface, Man., Edmonton, Vancouver and Yellowknife. He returned to Rome on Sept. 20. He would be back twice more — a five-hour stop in Fort Simpson, N.W.T. in 1987, and World Youth Day in 2002.

“We began to see this as a spiritual journey,” Archbishop MacNeil said in a 2014 interview before John Paul II’s canonization. “It’s just not like tourists. He’s coming to teach us. He’s coming to demonstrate in his own life, his own faith and his love for people. He showed that in many ways.”

Newspapers, TV and radio were full of stories on the upcoming papal visit. He was the first non-Italian pope in four centuries. He was recognized for his key role in battling communism in his native Poland and beyond. He had significantly improved interfaith relations, and upheld Church teachings on life issues, the ordination of women and a celibate priesthood while still supporting the reforms of the Second Vatican Council.

Pope John Paul II arrived in Edmonton on Sunday, Sept. 16, 1984, and led Evening Prayer at St. Joseph’s Cathedral. The next day, hundreds of thousands gathered at the nearby CFB Namao for Mass outdoors – a memory etched in the minds of those who attended.

“He’s a world figure who seldom comes close to visiting Edmonton. I think John Paul was a great international figure for peace and justice,” Rev. Mike McCaffery recalled. “The whole idea of having a pope from Poland, rather than having an Italian pope, was a great thing for the Church.”

Father McCaffery had more than memories to sustain him after the pope’s visit. At the time, McCaffery was the pastor of St. John Bosco Parish, whose congregation met at St. Elizabeth Seton School while their new northeast Edmonton church was under construction. The church contractor also built the altar, lectern and chair for the papal Mass. Once the church was completed, the altar and chair Pope John Paul II used at the outdoor Mass were donated to St. John Bosco.

“It was quite an honour, so I used to say every Sunday that I was sitting in the papal chair! It was a great honour to know the Pope sat in this very chair, preached from the same lectern and celebrated the Eucharist from the same altar,” McCaffery said.

McCaffery, now 84, served as a radio commentator during the papal visit, explaining the visit’s significance and sharing his own impressions. For a hometown priest, the Holy Father’s visit made a lifetime impact.

“The memory of having a pope present in the city of Edmonton, where I was raised, and the cathedral where I was ordained and also having the chair, the altar and the pulpit, there’s certainly an attachment there. It’s an event that you never forget,” McCaffery said.

De Robertis was pressed into service for the Western Catholic Reporter’s papal coverage just a few months before she was to join the Sisters of Charity of the Immaculate Conception.

“It was exciting and daunting at the same time,” De Robertis said. “This was very huge.”

With the permission of her order, she wrote an essay on Pope John Paul II’s life for the newspaper. Then she was called back into service as a freelance reporter for the actual visit  ̶  while recovering from surgery. “I was hobbling on the fields of Namao with an orthopedic boot on my foot!”

At the Mass site, Pope John Paul II was first introduced to a group of people with physical and mental challenges.

“He went among them, to talk to them, and they could see that he was at home with them,” Archbishop MacNeil recalled. “There were many ways that he kind of demonstrated being at home, being comfortable with his people. So they see a pope now as someone not way, way off in Rome; the pope was someone we saw, we were next to.

“The effect on people, it’s hard to measure that honestly. For them, the pope can’t be any longer just a distant person,” MacNeil said. “For a lot of people, they still remember that experience as one of the most powerful experiences of their lives because they saw the pope in the flesh.”

At one point, the Archbishop invited the pope to meet reporters and shake hands.

“When he reached out to one young woman to shake her hand, and she was so rattled, she had a microphone in her hand and she put the microphone in his hand!” MacNeil recalled. “People were so happy and amazed and awestruck that he would do that.”

What struck De Robertis most was the lasting impression Pope John Paul II left on so many people  – Catholic or not – including reporters and photographers lined up against a fence as they covered the outdoor Mass.

“Pope John Paul II had an immense appeal, an energy and charisma. There was something about him,” De Robertis said. “Now he had been in drama in Poland and you could kind of see it. But I’m not implying phoniness, I’m implying he really had a gift for connecting with people.”

De Robertis recalled one photographer kept calling “Over here, Holy Father!” trying to get a photo.

“The pope deviated off the red carpet and came over and shook each of our hands,” De Robertis said.

Archbishop MacNeil later whispered into the pope’s ear, “and the pope definitely looked back at me.” De Robertis would later find out that MacNeil had told him she was entering a religious community.

Later, back on the media bus, De Robertis recalled that even jaded journalists were still on a high.

“I remember that they were very excited when the pope shook their hand. There was a lot of energy on the media bus, a lot of excitement,” De Robertis said. “I heard them singing the pope’s praises. I heard one mainstream media reporter say that they considered the pope one of the best world leaders of the day.”

And Pope John Paul II used his position as the spiritual leader of the world’s Catholics to make a difference. That was evidenced, De Robertis said, in his homily at the outdoor Mass. A strong social justice advocate herself, she listened intently as Pope John Paul II focused on how the southern hemisphere would judge the north for inequality and imperialism.

“It became nationally and internationally known as such. How the poor South would judge the rich North because of all the terrible and major inequalities created by unbridled capitalism. He talked about weaponry and peace and freedom and human rights.” 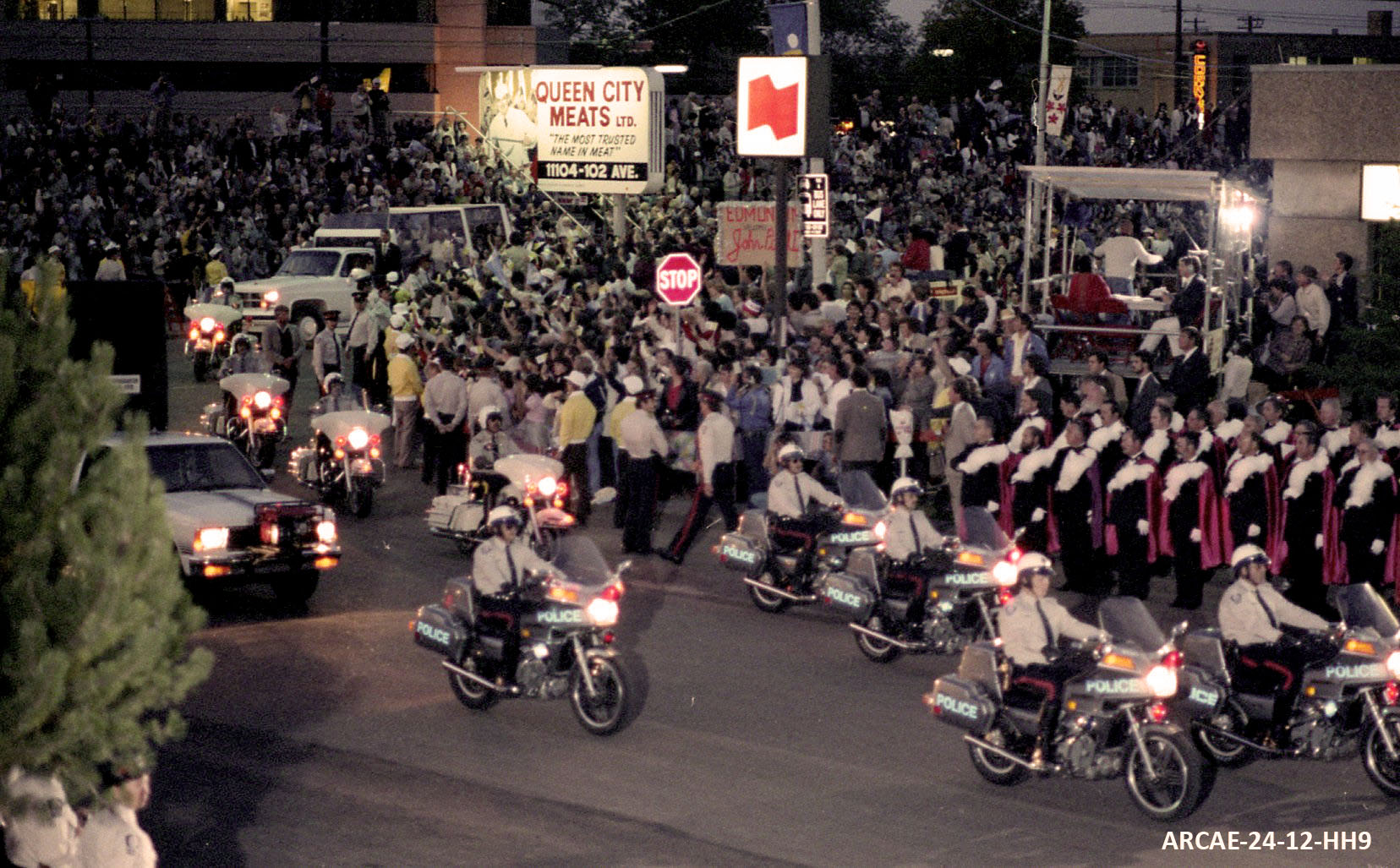 oPope John Paul II’s motorcade travels through the city of Edmonton during his 1984 visit. 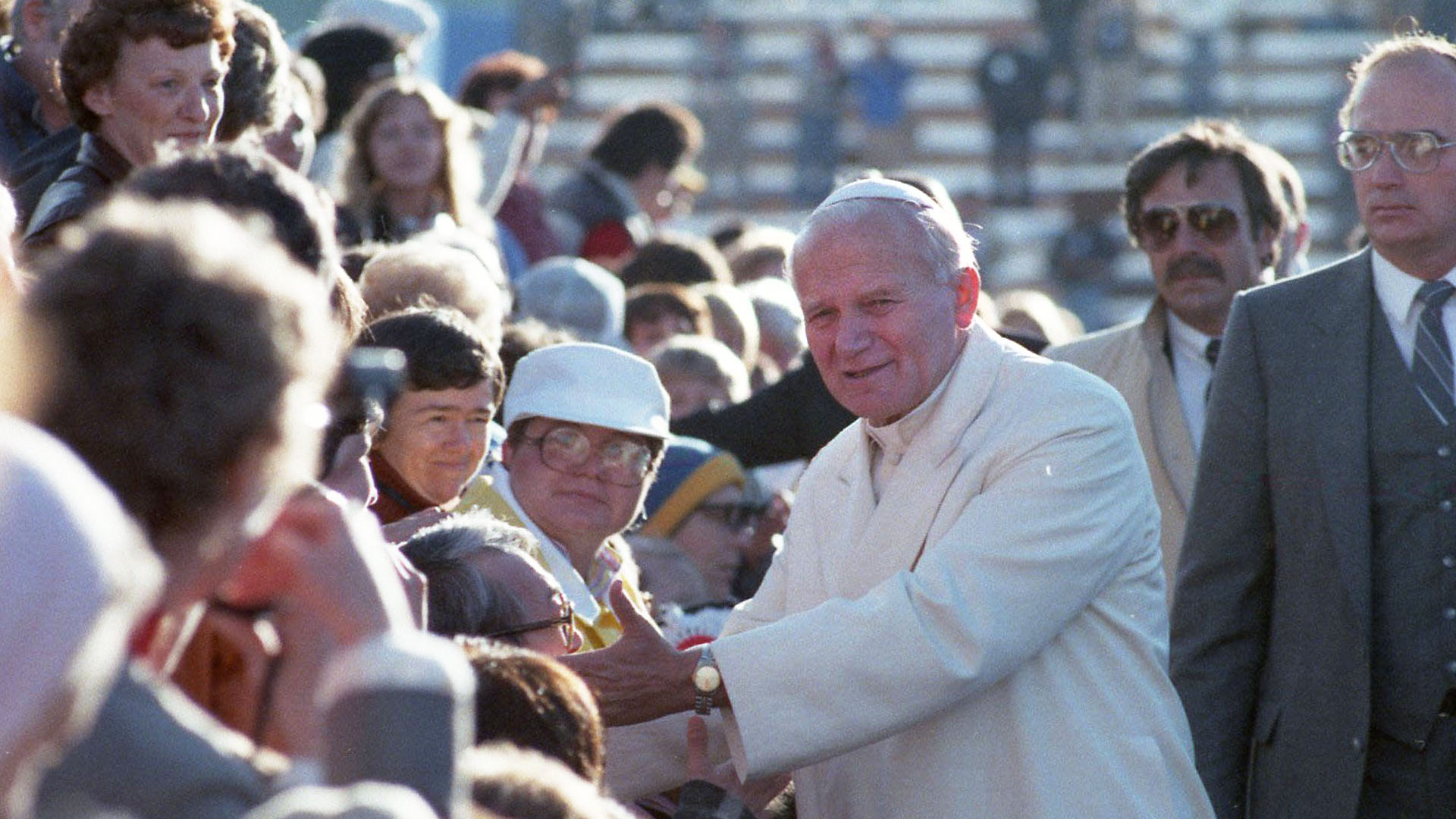 People were both surprised and very excited when the pope engaged with the crowds and shook their hands. 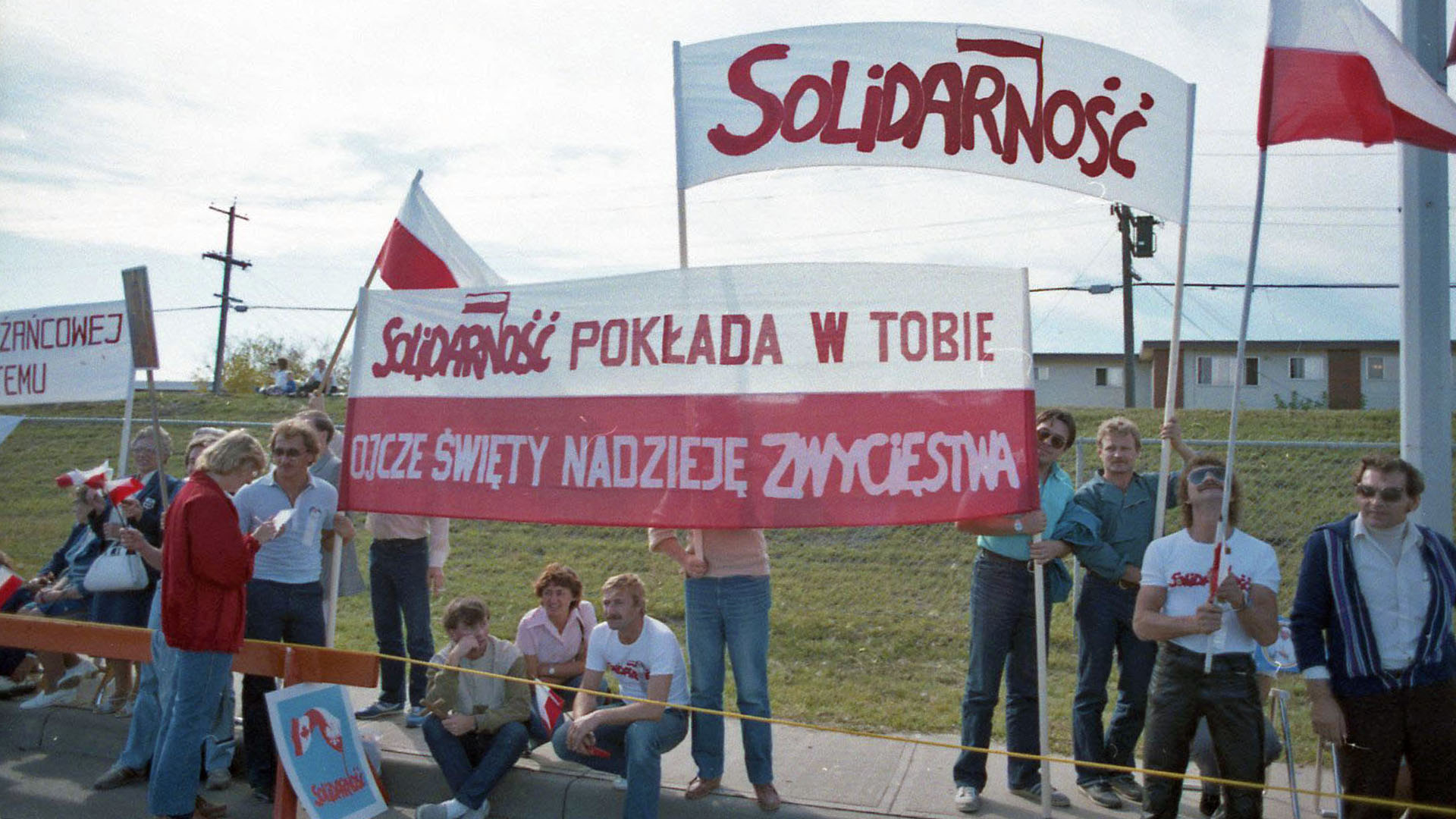 A group of Polish Catholics greet the Pope with Solidarity banners. 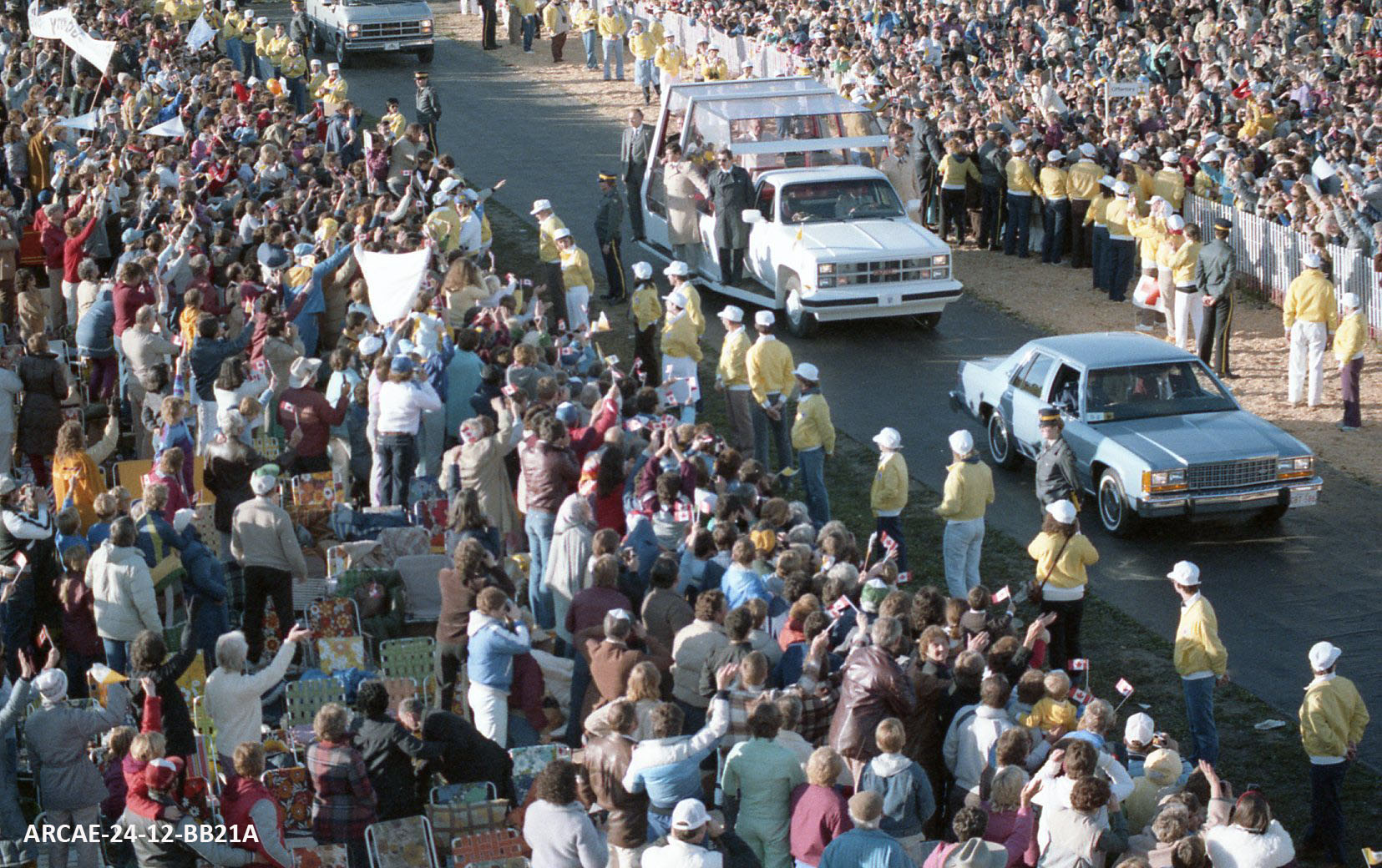 Tens of thousands lined the route wherever the Pope traveled. 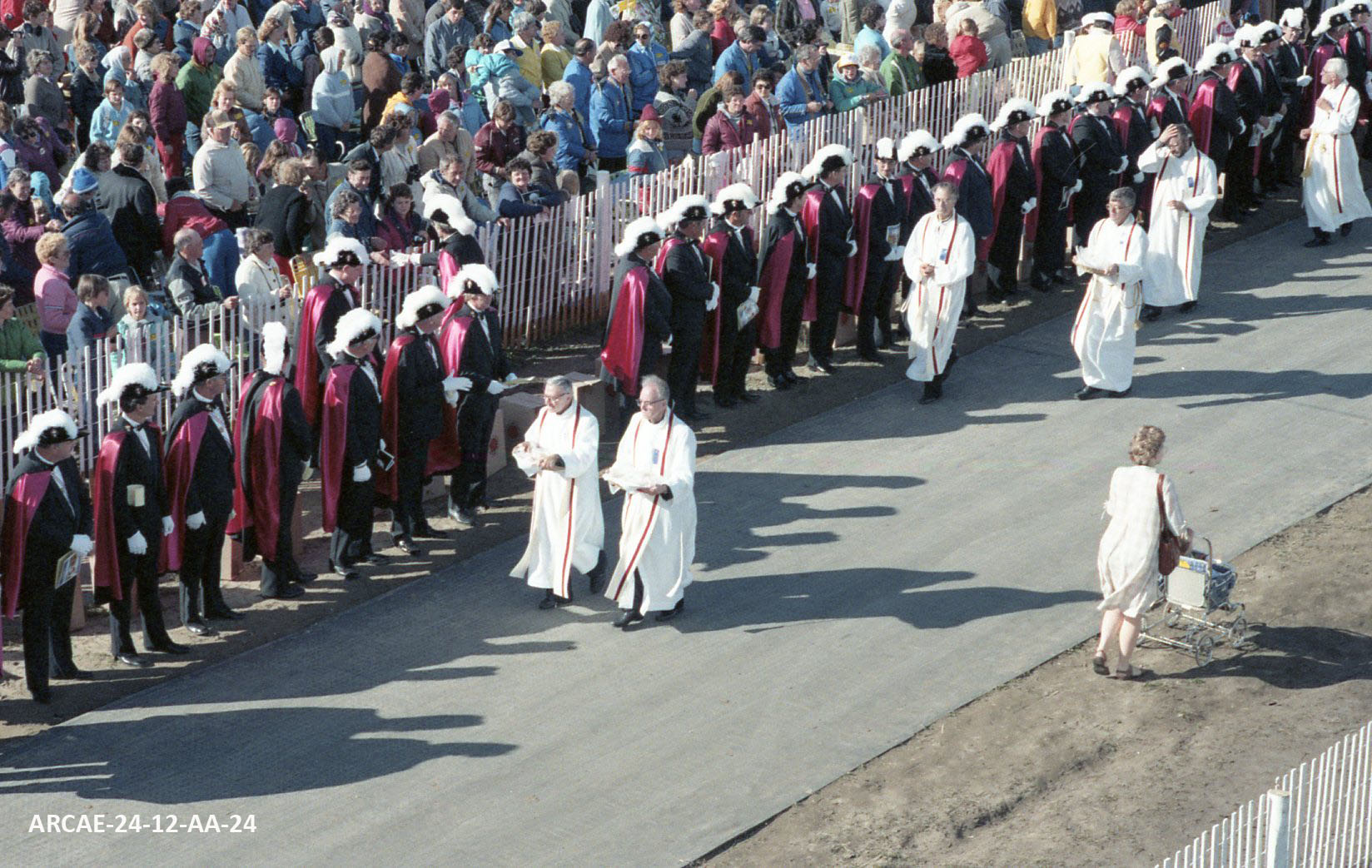 While in Edmonton, Pope John Paul II stayed at the now-closed Grey Nuns Regional Centre, so was seen travelling through downtown. 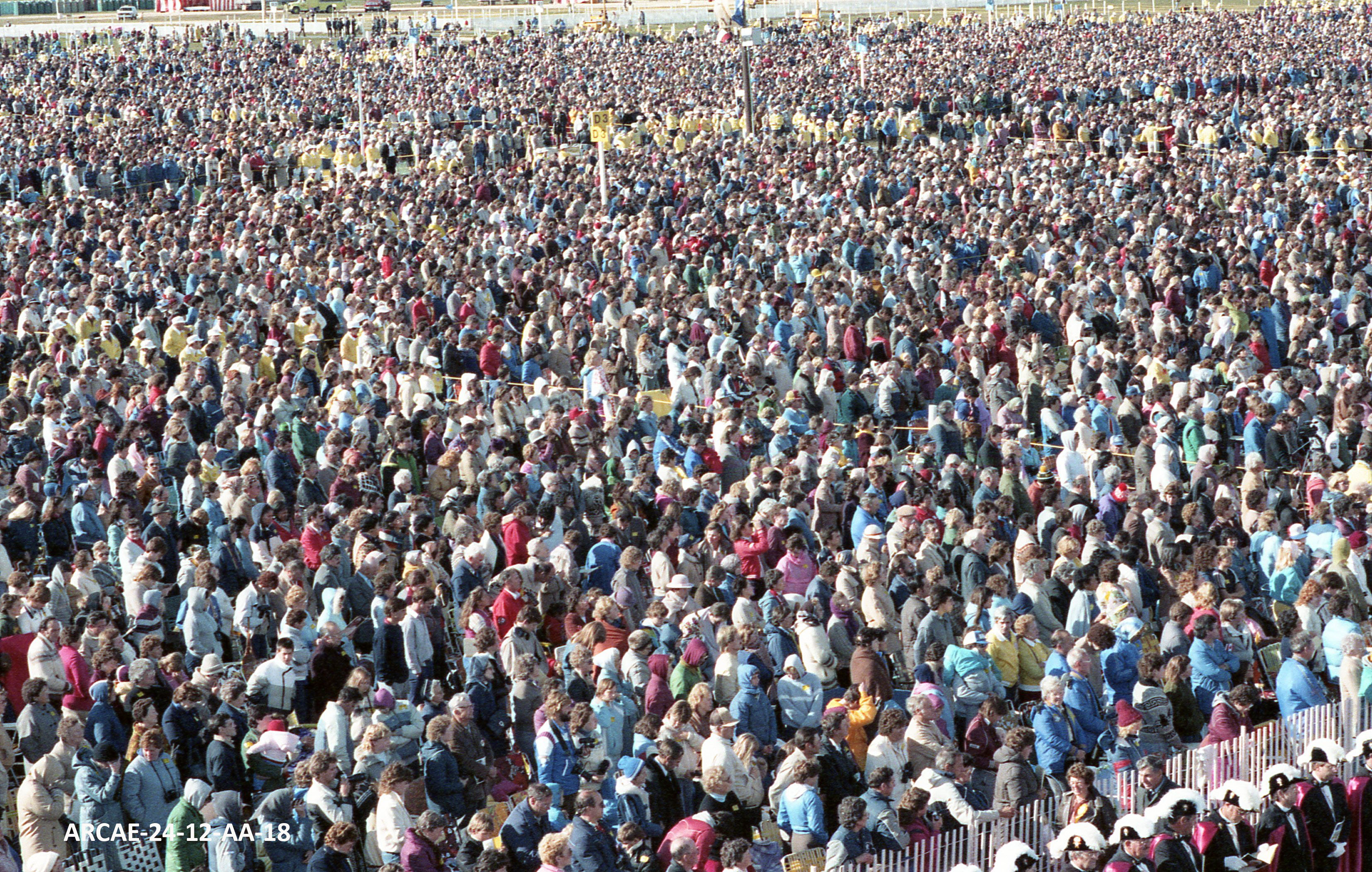 On Monday, September 17, 1984, hundreds of thousands gathered at the nearby CFB Namao for Mass outdoors. 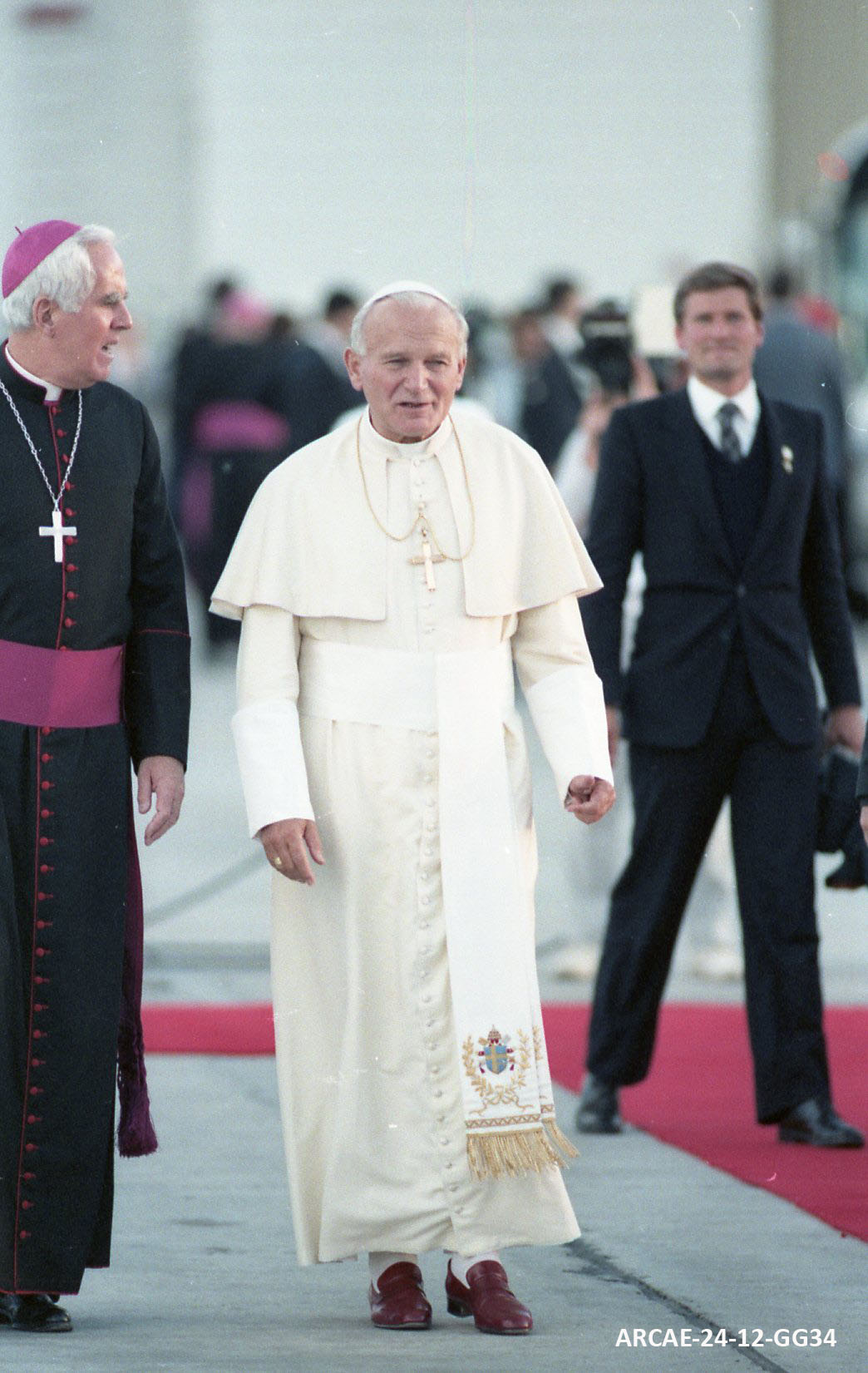 Pope John Paul II at the airport at CFB Namao during his 1984 visit. 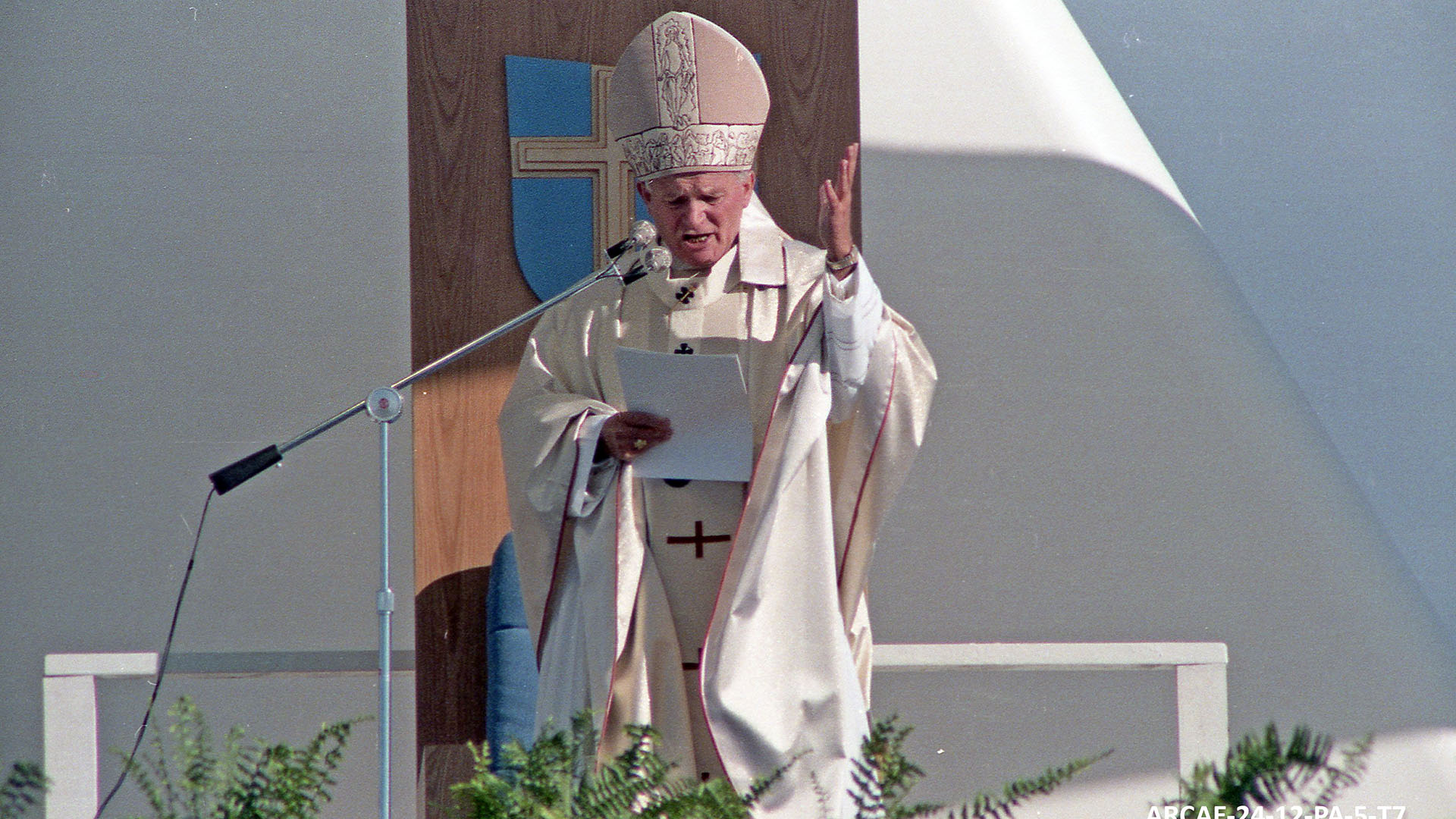 Pope John Paul II’s homily focused on how the exploited southern hemisphere would judge the north for inequality and imperialism. 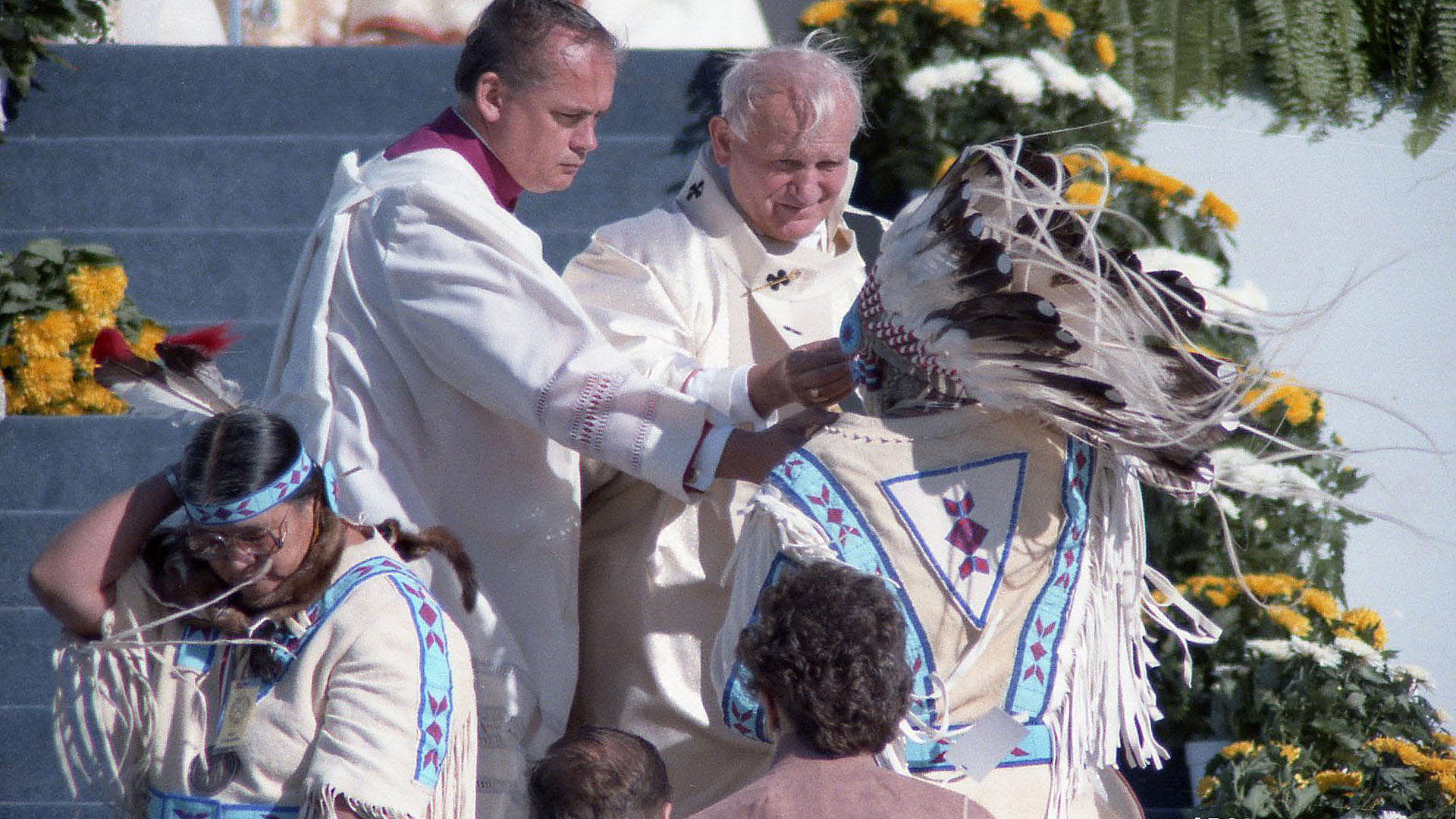 Pope John Paul II used his position as the spiritual leader of the world’s Catholics to make a difference by promoting social justice. 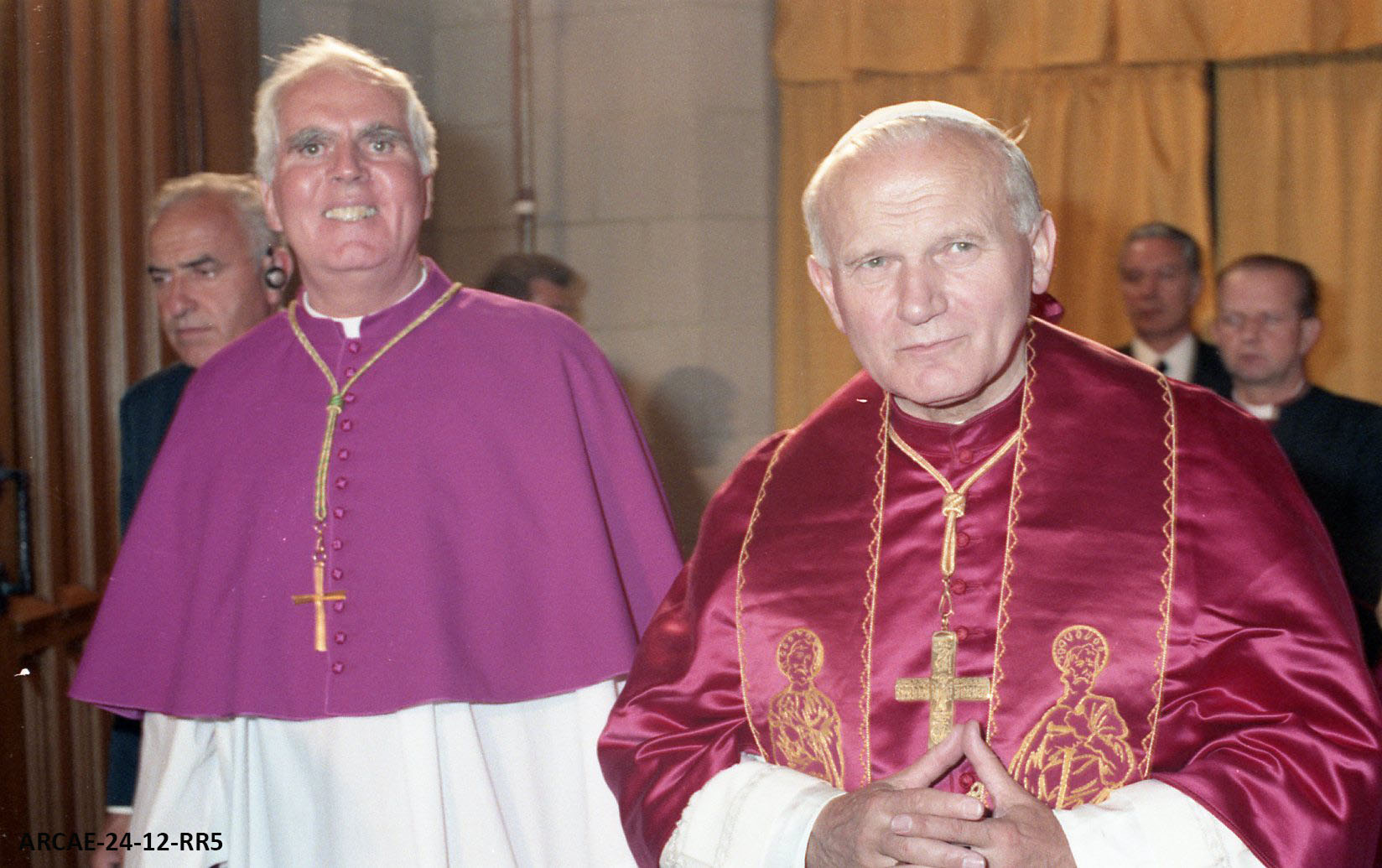 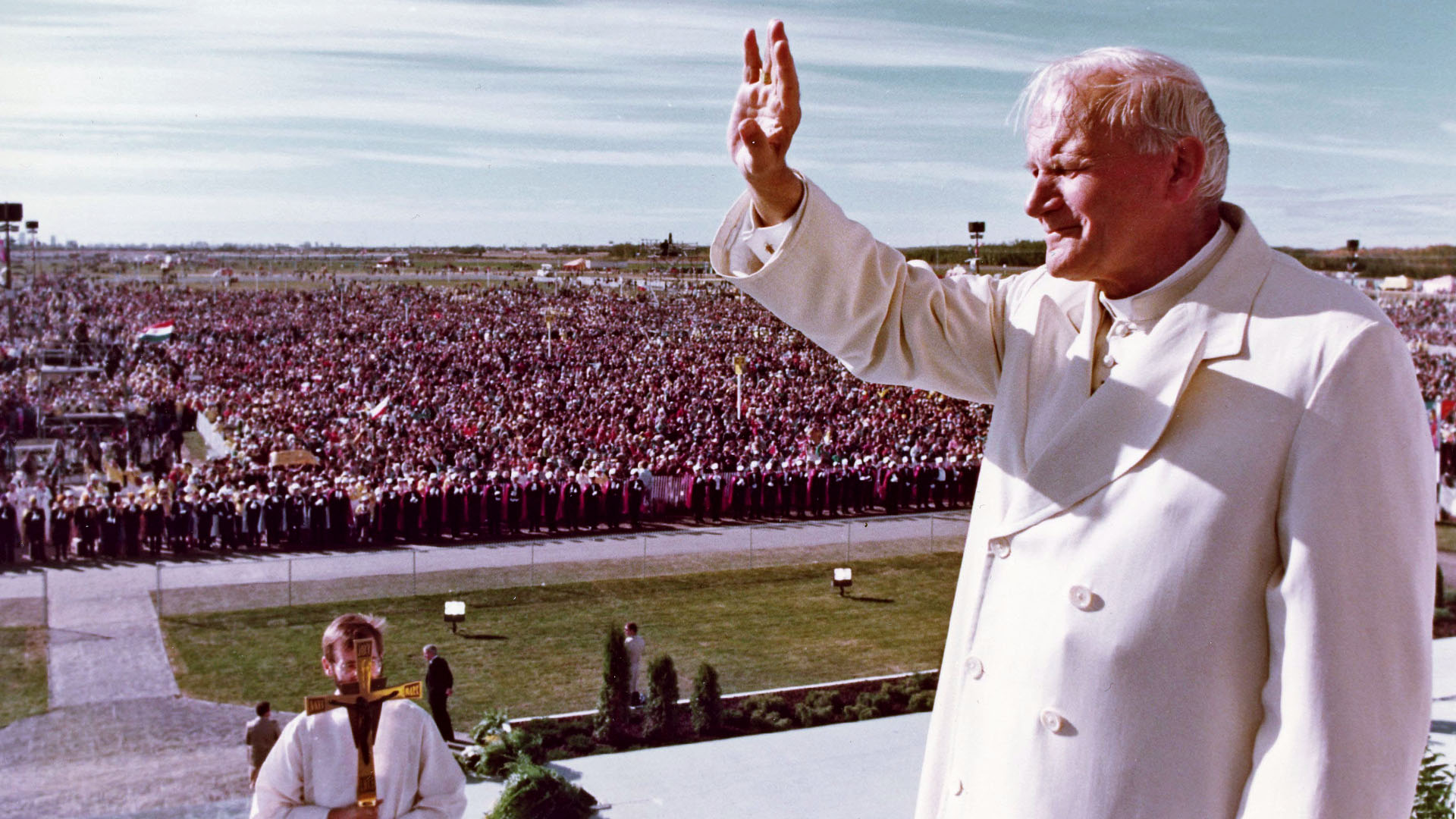 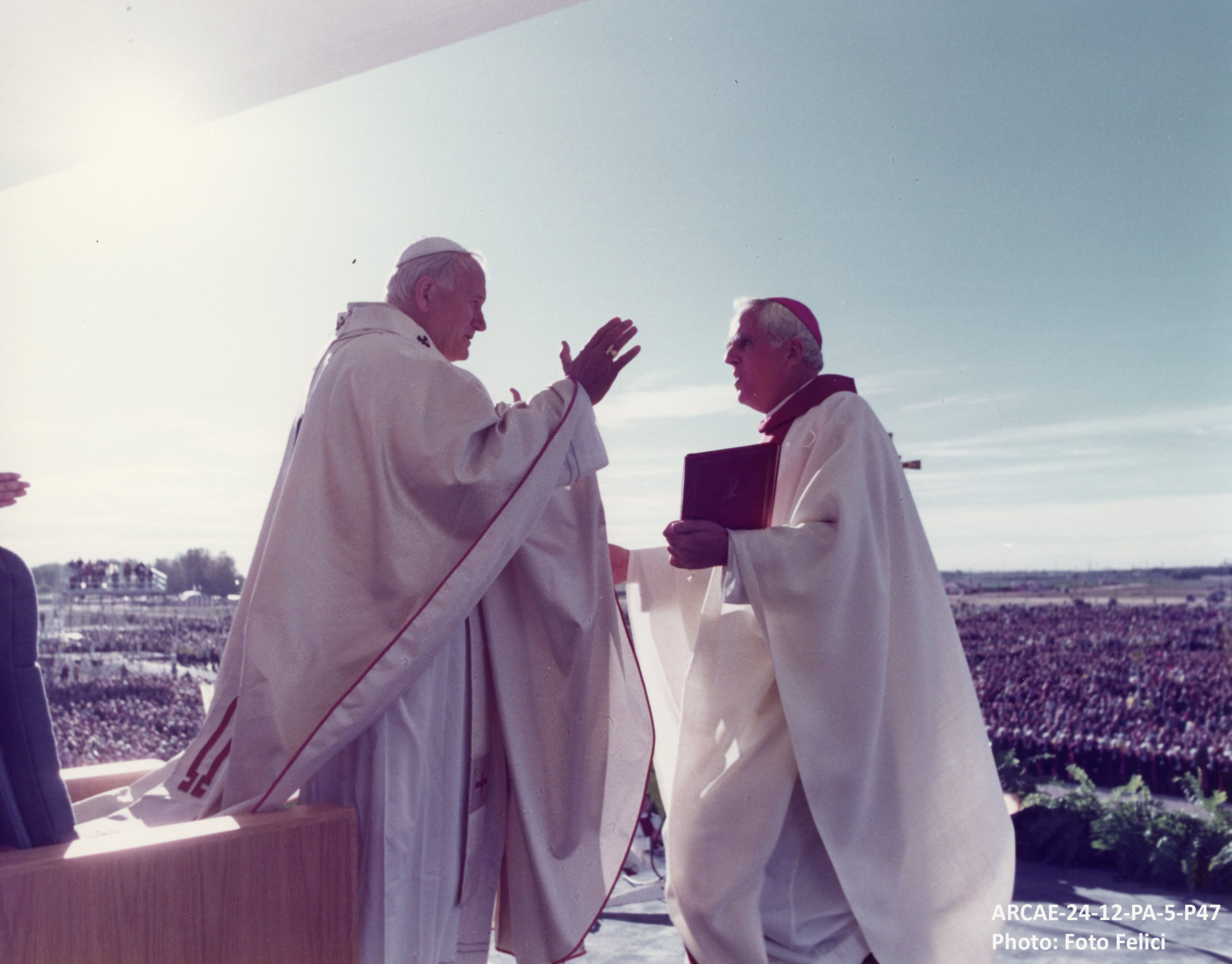 Hundreds of thousands gathered at nearby CFB Namao for a Papal Mass outdoors – a memory etched in the minds of those who attended. 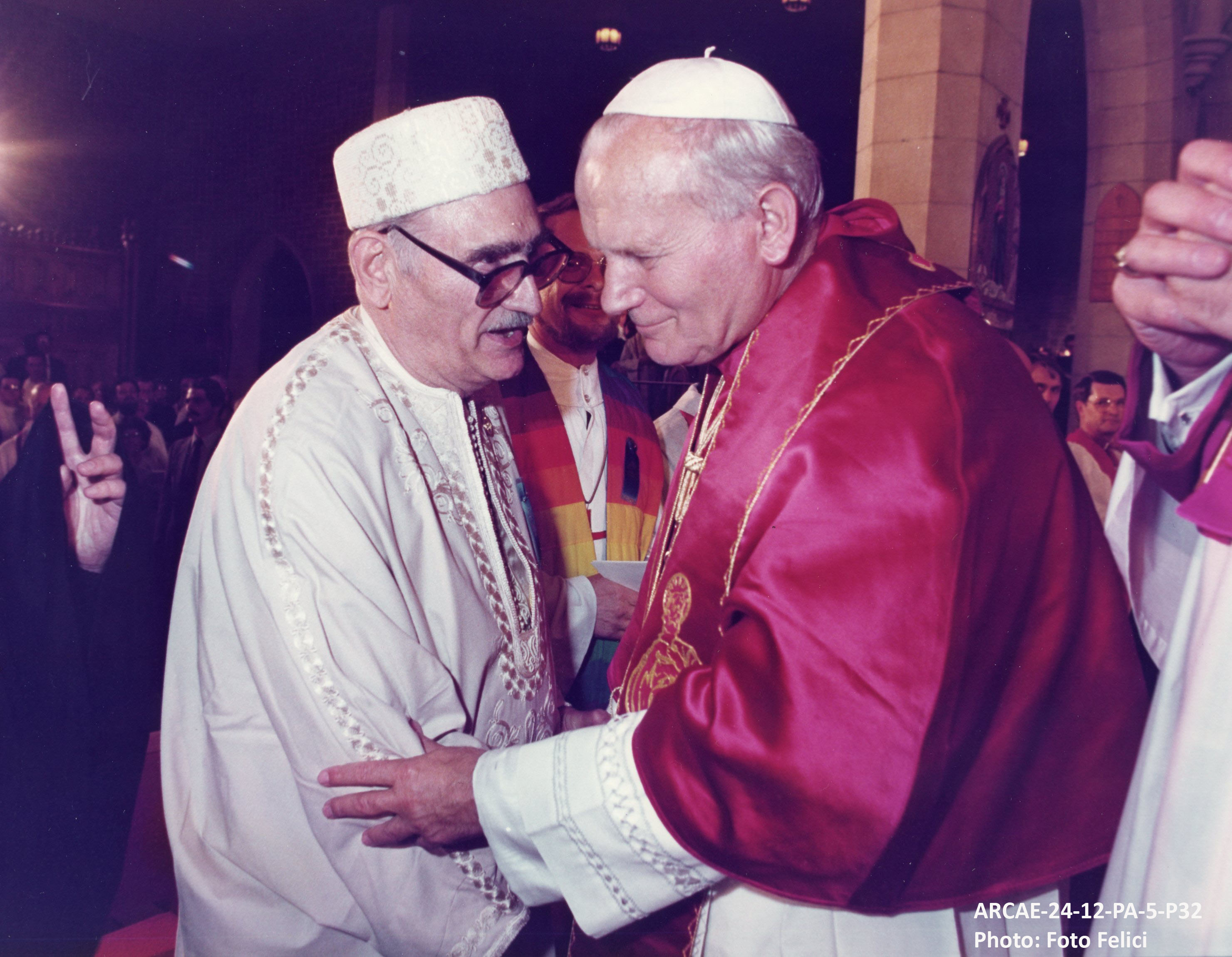 While in Edmonton, Pope John Paul II stayed at the now-closed Grey Nuns Regional Centre, where he blessed a replica of the cross raised by the early Alberta missionaries. It was in the centre’s chapel that the Holy Father switched from famous figure to priest in prayer.

“What amazed me was in a split second he seemed to be completely in another world,” Archbishop MacNeil recalled. “He had that ability to get in touch with God in prayer immediately … I began to notice that he could do that with people. He seemed to be able to focus so completely and deeply toward each individual that in a way it’s almost as if he’s able to have the same attitude to individuals as he has with God. He’s just totally present.”

“In so many ways, his whole life was kind of a prayer.”

At night, Archbishop MacNeil told the pope he had “homework.” He was to read submissions from young people who participated in a contest to ask him a question. The next day Pope John Paul II met them – one boy from Chile, and a girl who asked about female priests.

In honour of his visit to Edmonton, St. Joseph’s Cathedral was designated a Basilica. It was there that the pope prayed the Vespers on his first evening. Among the guests were Muslim, Orthodox, Jewish and other faith leaders, invited by MacNeil.

“We treated them as equals. They were up there in the sanctuary,” and Pope John Paul II shook their hands, MacNeil recalled, conveying the Christian calling by personal example.

-With files from Canadian Catholic News