Skip to content
Archbishop Richard Smith designated Skaro as the Edmonton Archdiocese’s first official Marian shrine. Smith made the announcement as the two-day pilgrimage began Aug. 14, the vigil for the feast of the Assumption of the Blessed Virgin Mary.Chris Berthelot, Grandin Media

Under the cover of night, thousands of pilgrims made their way around the stone grotto at the Skaro Shrine in a candlelit procession to honour the Blessed Virgin Mary as they have done for 100 years.

But this year, the pilgrimage had special significance. Skaro has been designated as the Edmonton Archdiocese’s first official Marian shrine. Archbishop Richard Smith made the announcement as the two-day pilgrimage began Aug. 14, the vigil for the feast of the Assumption of the Blessed Virgin Mary.

As they have done for 100 years, , thousands of pilgrims made their way around the stone grotto at the Skaro Shrine in a candlelit procession during the annual pilgrimage Aug. 14.Chris Berthelot, Grandin Media

“We as a Catholic people, in our desire to follow Jesus, cannot remain faithful to Him without turning to his mother,” Archbishop Smith told pilgrims gathered at the Skaro Shrine, about an hour’s drive northeast of Edmonton.

Millie Szabunio, 91, was overjoyed when she heard about the shrine’s designation.

“I’m watching the people go by, and they’re so happy, all the happy sounds of children and adults. It’s an honour to (see the) progress, as far as that goes.”

Szabunio’s son Paul said his mother has made the pilgrimage since she was a child, and later brought him to Skaro during his own childhood. To him, the Marian shrine designation is wonderful news.

“To come here tonight on the 100th anniversary, and to hear this news — we didn’t know about it — it’s very fitting, it’s a capstone,” Paul Szabunio said.

With the grounds dotted with recreational vehicles, tour buses, and thousands of Catholic faithful, the centennial pilgrimage to Skaro shrine was celebrated with vespers sung in Polish – the mother tongue of the settlers who built the stone grotto in 1919 – followed by Mass in English. 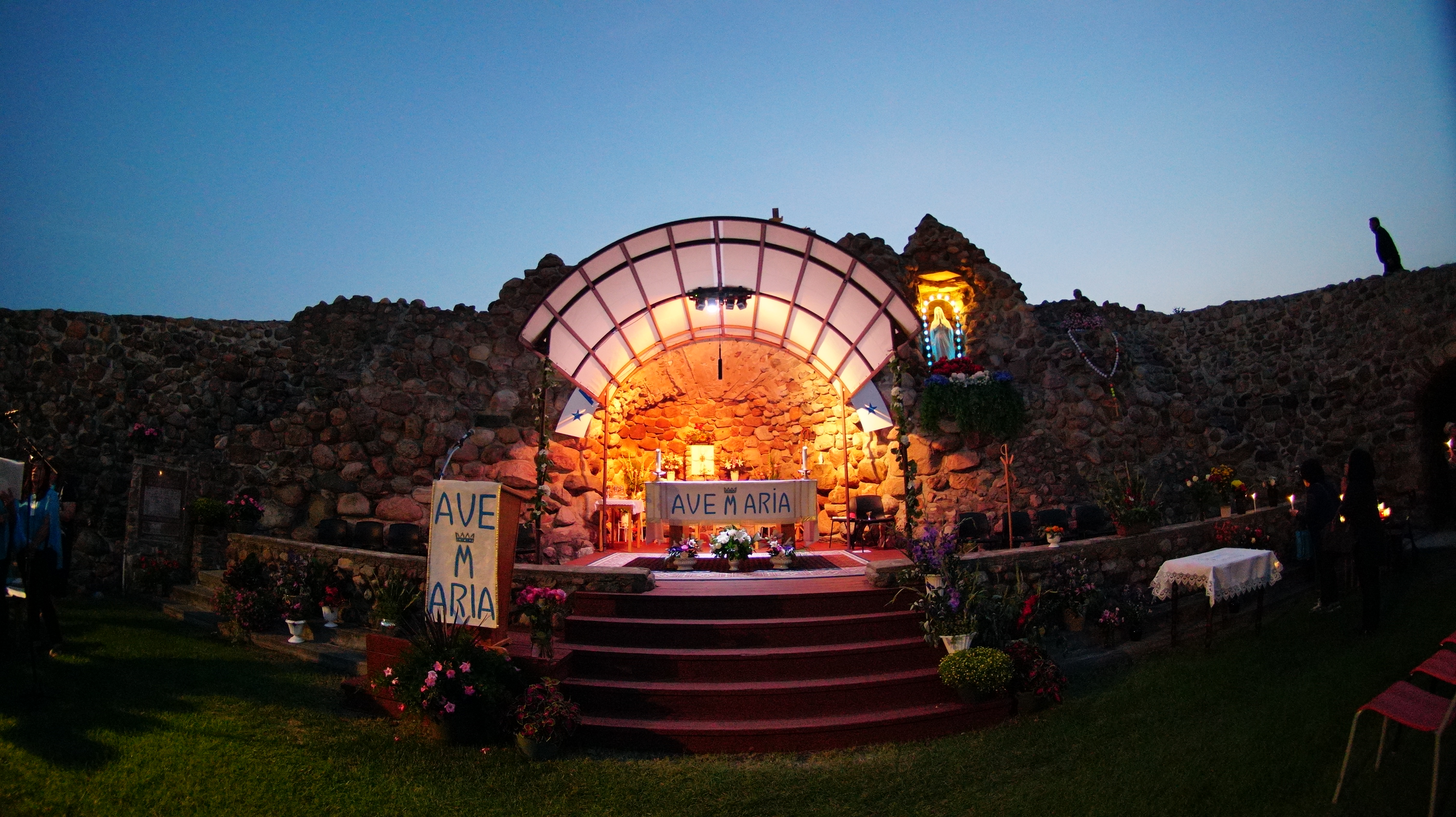 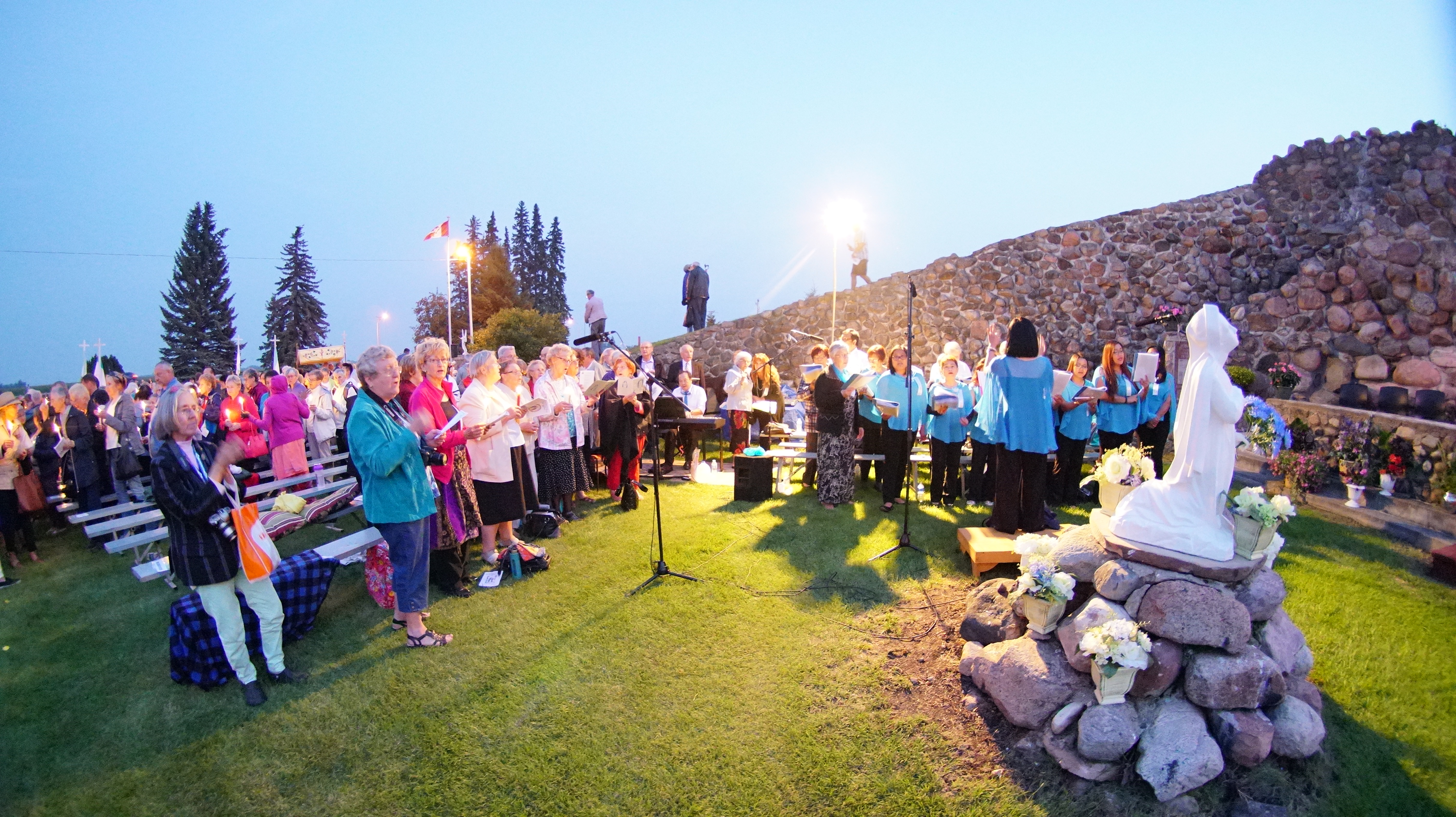 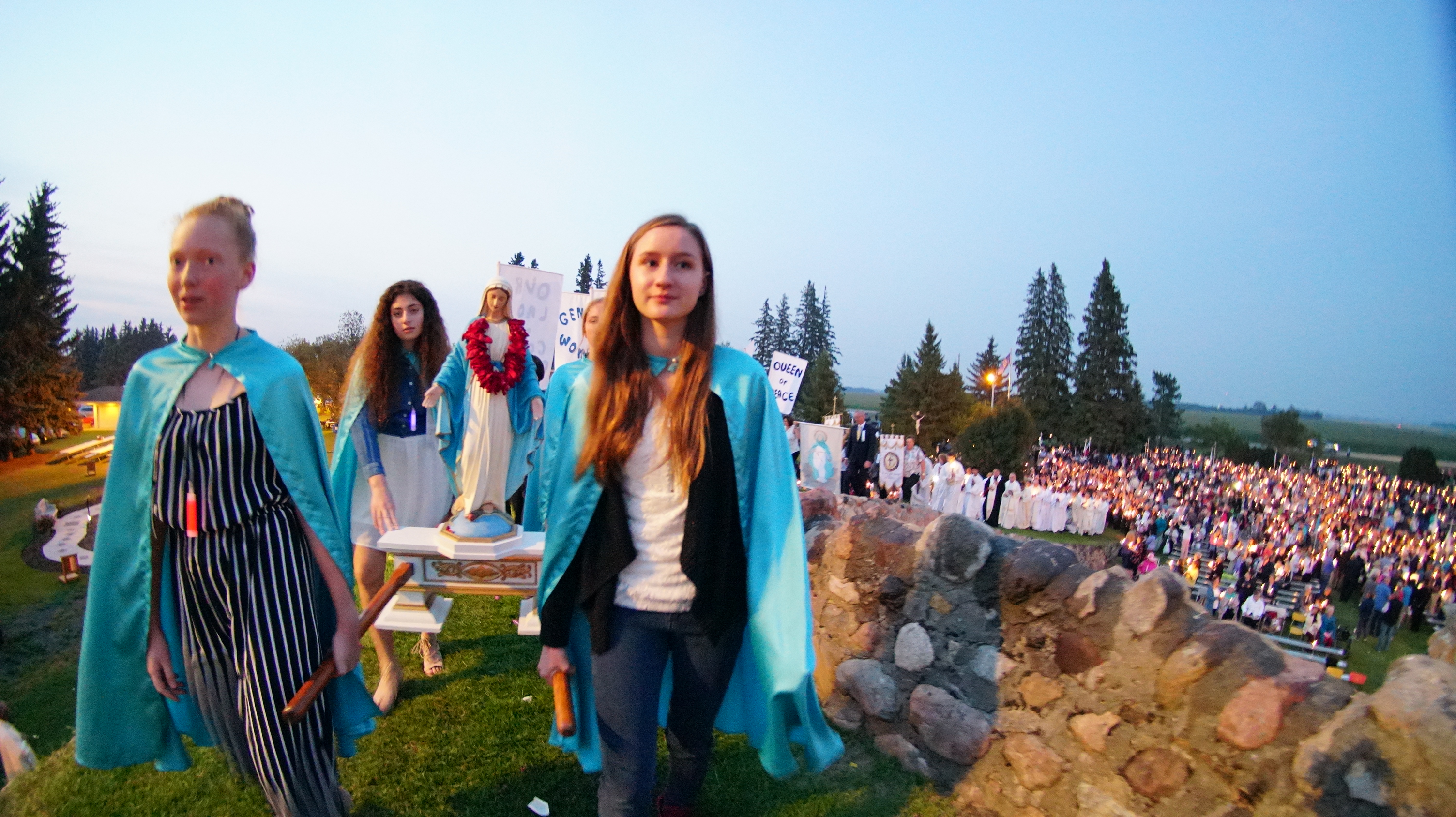 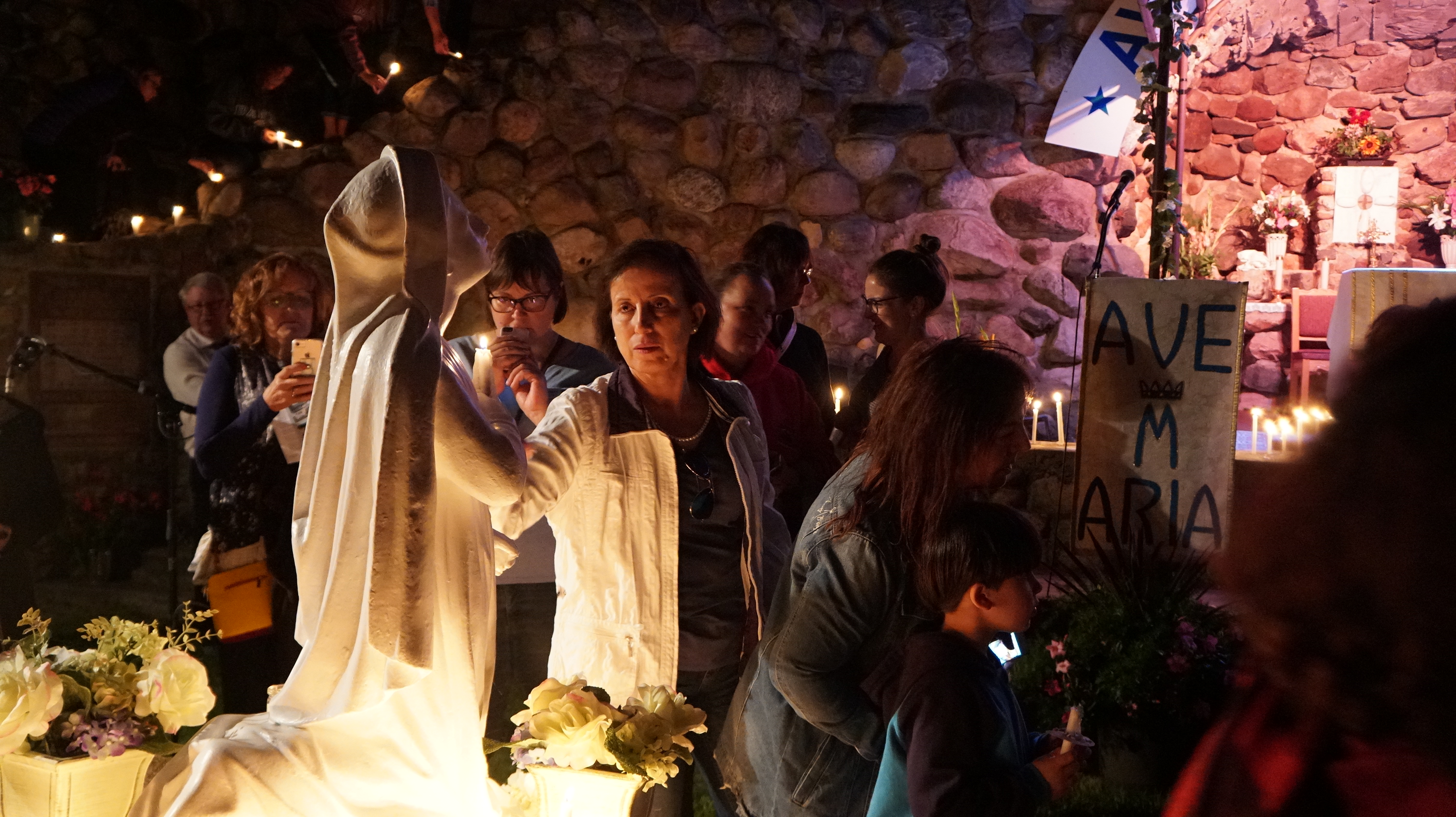 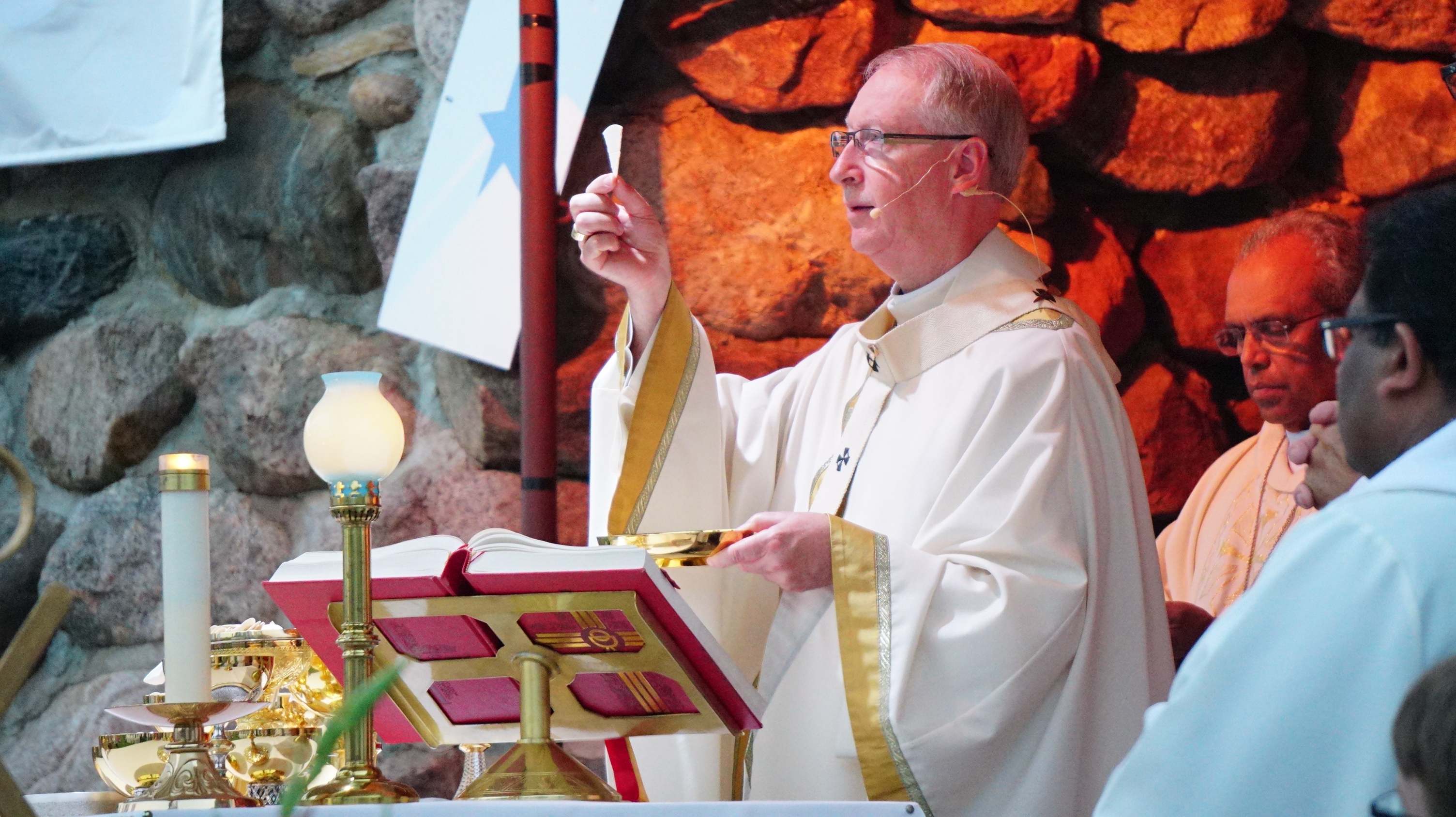 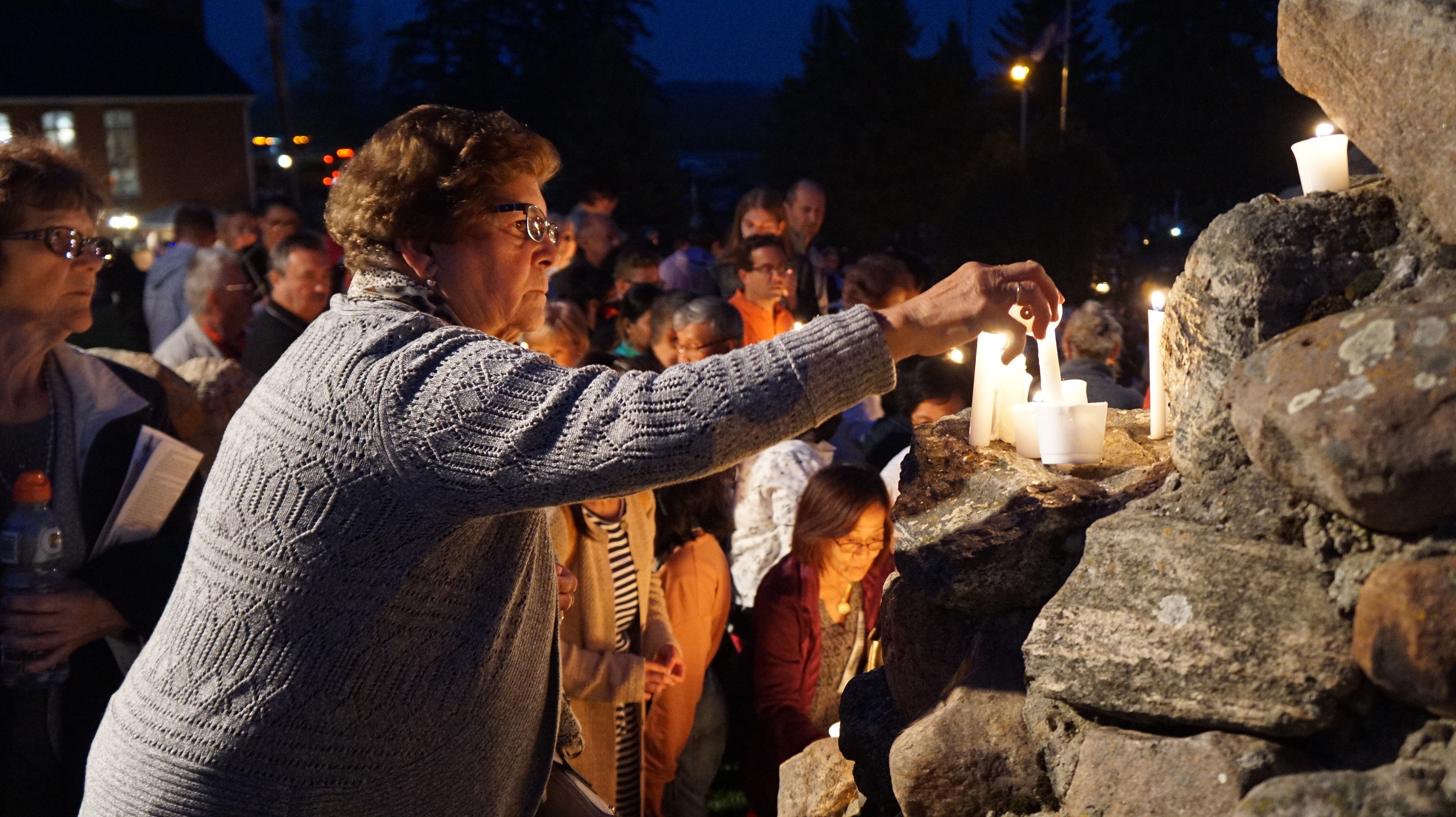 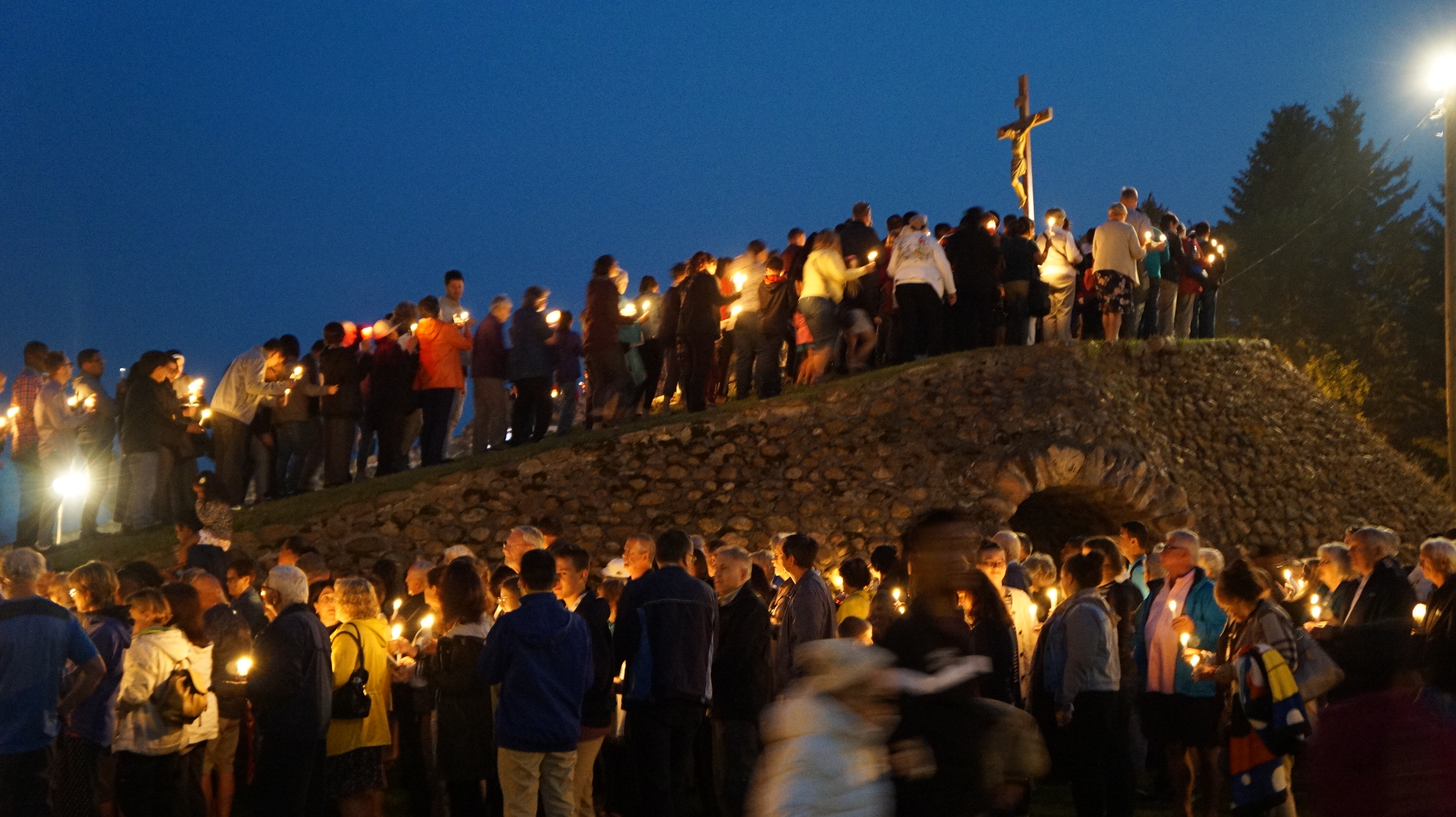 The designation as a Marian shrine is part of a larger effort to increase devotion to the Virgin Mary.

The decision stems from last year’s celebration of Canada’s 150th birthday, when bishops across the country consecrated their dioceses on July 1 to the protection of the Blessed Virgin.

Pilgrims carry a banner of the Blessed Virgin Mary on the day of her AssumptionChris Berthelot, Grandin Media

In an interview Archbishop Smith said: “How do we honour that? How do we mark it locally? The idea surfaced, maybe, we could be establishing here an Archdiocesan shrine, formally, to designate a shrine to Our Lady as a place of pilgrimage.”

In the Edmonton Archdiocese, Skaro was an obvious choice, Archbishop Smith said.

“It’s recognizing what has already been in place and recognizing it in an official way. Perhaps I could say it’s the Archbishop catching up with the people after all of these years,” he joked.

The centennial pilgrimage was also commemorated with the installation of the new rosary garden — a stone walkway beside the shrine. Sixty children — holding an enormous blue rosary — took turns saying each prayer before the new garden was blessed by Archbishop Smith.

The 100th Skaro pilgrimage was commemorated with the installation of the new rosary garden — a stone walkway beside the shrine.Lincoln Ho, Grandin Media

The winding pathway is surrounded with plaques marking different decades and mysteries of the rosary, and is marked with black tiles that represent individual rosary beads.

Sonia Mackay, an organizer of the pilgrimage, says the rosary garden is a unique addition to Skaro.

Nestled between two highways and built on the grounds of Our Lady of Good Counsel Parish, the grotto was largely initiated by Oblate priest Father Anthony Sylla, modelled after the Our Lady of Lourdes Shrine in France, and built by parishioners.

Since then, visitors have flocked to the site for the annual pilgrimage. On the first night, they affix candles throughout the shrine.

“It’s a different, unique, outside way to express our faith,” said Cheryl Standnick, who has attended the pilgrimage since she was a child with her friend Claire Kliachik. “To watch them burn throughout the night and see them the next day, almost signifies your prayers are still there, being listened to.”

Claire Klachik said “Putting your candle on a rock or wherever you put your candle, and then walking down again and turning around and getting that glance of the candles, you never forget that view.”

“It’s just very sacred and holy. It’s a very blessed and precious time for me,” said Oakes, who accepted the Catholic faith at Easter 2017. Oakes said the candlelit procession is her favourite part of the pilgrimage, calling it “extremely powerful, and very moving, very emotional.”

Bernice Townsend, a pilgrimage organizer and a descendant of the original Skaro pilgrims, said Marian devotion brings visitors back each year.

“We have busloads from Calgary, from Red Deer, that’s what happens. People are brought by friends or they’ll see it in the church bulletin or something, and they just return time and time again,” said Townsend, whose great-grandfather donated more than a hectare of land for the shrine.

“Where else do you have a moment to spend this, spiritually? It’s spectacular.”

The centennial pilgrimage was also a highlight for Father Kristopher Schmidt, who now serves as the pastor of Our Lady of Good Counsel. The shrine sits on the parish grounds.