Skip to content
A sea of candles held by pilgrims flickers brightly during the Vigil Mass of the Assumption of the Blessed Virgin Mary at Skaro, Alberta.Lincoln Ho/Grandin Media

There is an element of healing at Alberta’s Skaro Shrine, just like its namesake, the Our Lady of Lourdes Grotto in southern France.

“I believe in healing every day from God in prayer, not necessarily healing of pain all the time but healing through being able to accept different things,” said Mark Malica, an organizer of the 99th annual pilgrimage to Skaro, 80 kilometres northwest of Edmonton.

A sea of candles, held by pilgrims, flickered brightly as Archbishop Richard Smith, Auxiliary Bishop Gregory Bittman and their brother priests celebrated the Vigil Mass of the Assumption of the Blessed Virgin Mary on Monday night. Pilgrims placed the candles at the grotto with prayer intentions attached.

“It was so peaceful, so quiet, so serene,” said Malica. “At one time in the Mass there, you could hear a pin drop.”

Rick and Monica Schuh of Edmonton attended the Skaro Pilgrimage for the first time this year.

“I saw how large it was and I thought, ‘This is something special,’” Rick said. “I was surprised by how many people we saw just everywhere and I thought, ‘That’s a real testament to the faith for all these people to drive so far to come out to this.’”

Thousands have been gathering in the small farming settlement of Skaro every year on Aug. 14 and 15 to honour Our Lady of Lourdes since the first 5,000 pilgrims arrived by horse-drawn carriage nearly a century ago.

Skaro was named after a Norwegian, Knut Skaro, who opened the first post office in the community. The first church at Skaro, Our Lady of Good Counsel Parish, was blessed on July 5, 1904, by Bishop Emile Legal OMI, who would become the first Archbishop of Edmonton. The Skaro Shrine was built in 1919.

Malica’s grandparents were among the Polish and Ukrainian settlers who helped build the semicircular grotto by hand — digging the foundation, placing stones, and hauling gravel.

“The church at that time was a huge part of their lives, like it should still be today,” said Malica. “Their faith was strong.”

Malica’s own faith was formed by his parents Helen and Stanley, who, even in their old age look forward to the pilgrimage every year.

“My children are here and seeing all the (Knights of Columbus) and the priests, that felt really good.”

Helen Malica, 88, said : “It’s very peaceful, it’s wonderful to come every year, to see all the lights and people.”

“There’s something about this place, it just can touch your soul like no other place can. I was just astounded by the number of people and the enthusiasm for the Holy Spirit here. It was really moving.”

Wade Malin, 28, has attended the pilgrimage since he became a Catholic in his teens. His mother introduced him to the faith by bringing him to Mass at St. Theresa’s Parish in Edmonton.

Malin left candles at the grotto for his mom, who recently died of cancer.

“My mom was the fire and the light o my faith, so I always leave a piece of that light on the grotto for mom. This was always an important place for her,” he said.

“There’s something about this place, it just can touch your soul like no other place can. I was just astounded by the number of people and the enthusiasm for the Holy Spirit here. It was really moving.”

His favourite moment of Skaro pilgrimage was the Archbishop’s blessing.

“Hearing his words in this place is always special to me,” said Malin. “To hear the words of the Holy Spirit and the Gospel spoken aloud, outside, I like that.”

As traffic passed on the nearby highway, Archbishop Smith paused before beginning his homily.

“Every time a truck goes by I say a prayer for the driver,” he said. “That all who witness our example will themselves come to know the joy of our faith.” 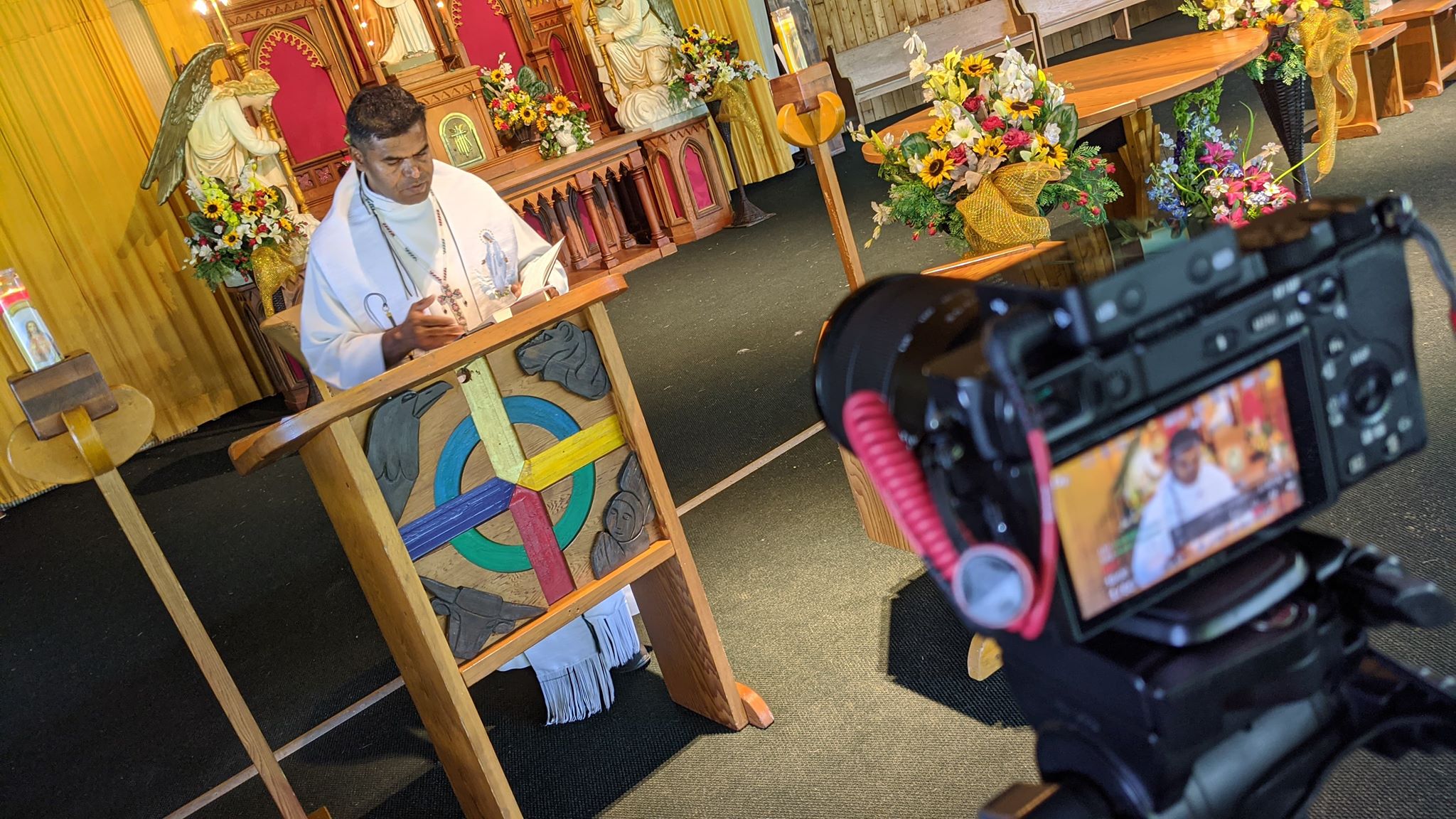