For Elizabeth Morales, the sight of her husband and two other men prostrated before the altar at St. Joseph’s Basilica was the most moving sign of just what it means to be a deacon in the Catholic Church.

“It signifies humility and having unconditional service and love for the Lord,” Morales said. “To me, prostrating is surrendering, trusting, and being humble for the Lord.”

Ramon Morales, Christopher Ashdown, and Edward Meding were ordained to the permanent diaconate by Archbishop Richard Smith at St. Joseph’s Basilica on Aug. 11, in a joyful celebration witnessed by hundreds of relatives, friends, deacons, and fellow parishioners. The ordinations bring the total number of permanent deacons in the Archdiocese of Edmonton to 36.

“We are grateful to you, brothers, for seeking to hear the voice of the Lord and responding generously with your lives to his call,” Archbishop Smith told the men during his homily. “We welcome the gifts that you bring to us. The Church today rejoices with you and your families, and we pledge you our prayer and support.”

The commitment to service, both at the altar and in ministry to the needy, is central to the vocation of a deacon, Archbishop Smith said. Even the word ‘deacon’ stems from the Greek word for service.

“Deacons are configured to Christ the servant, who came among us not to be served but to serve,” the Archbishop explained. “In caring for the poor and needy, deacons, in virtue of the gift of the Spirit received at ordination, sacramentalize, make visible, the presence of Christ the servant. In so doing they build up the Church of Christ and serve her communion.”

Elizabeth Morales said her husband, a longtime adult server at St. Agnes Parish in south Edmonton, has always been a role model of service for their two sons, and they couldn’t think of a more deserving candidate for the diaconate.

“Since the very beginning, the values that he has, in terms of love for the Lord and service in our church community, have been inculcated to them,” she said. “They really believe that he deserves to step up his service.”

Ramon had always hoped one of his sons might become a priest, she said, but perhaps the prayers were answered through his own ordination instead.

“He may not see his dream come true with his sons, but for him, with his passion and love for the Lord, being a permanent deacon is a dream come true. Many are called, but few are chosen, and I am so blessed that God gave him the opportunity to become one.” 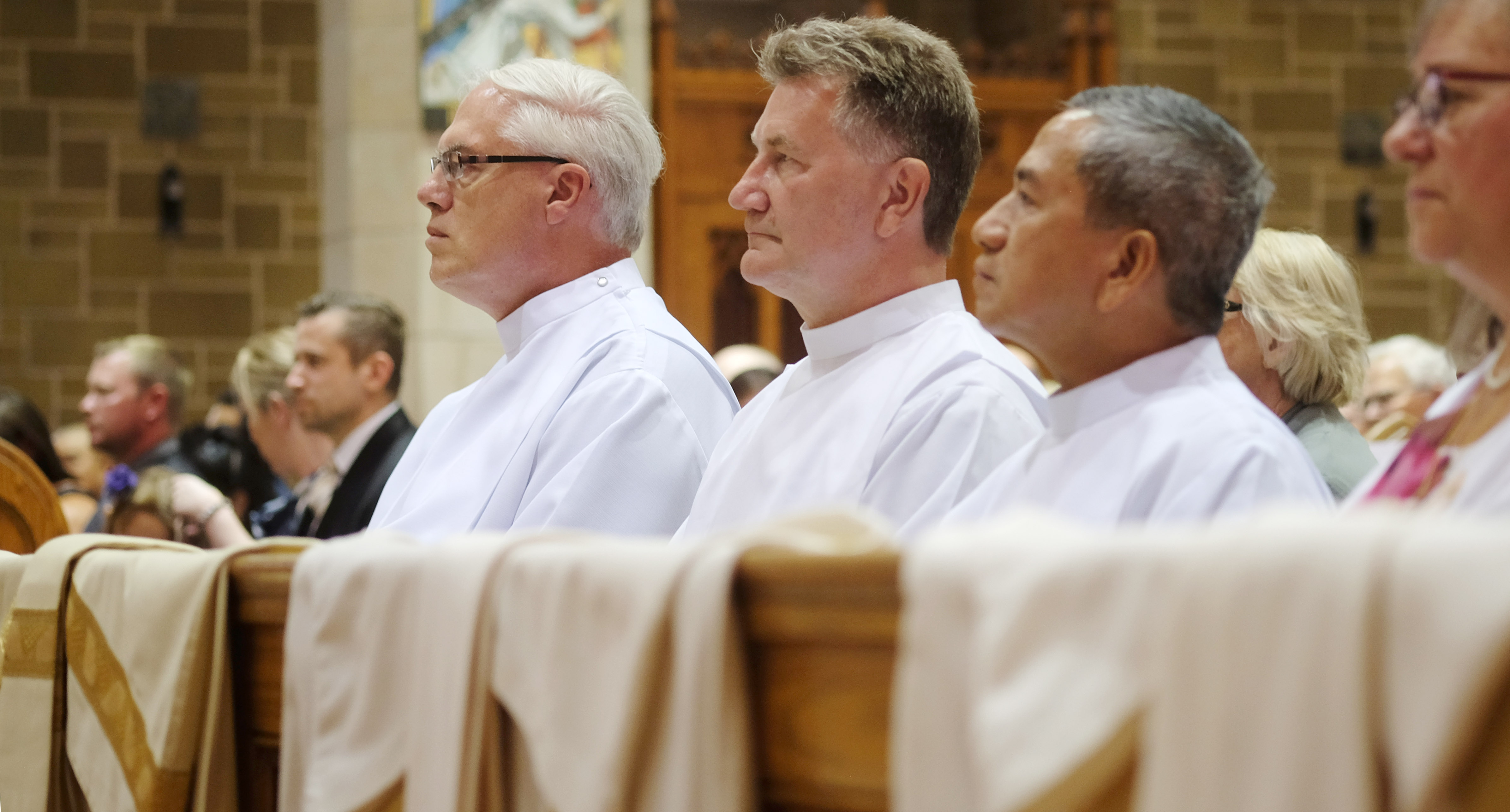 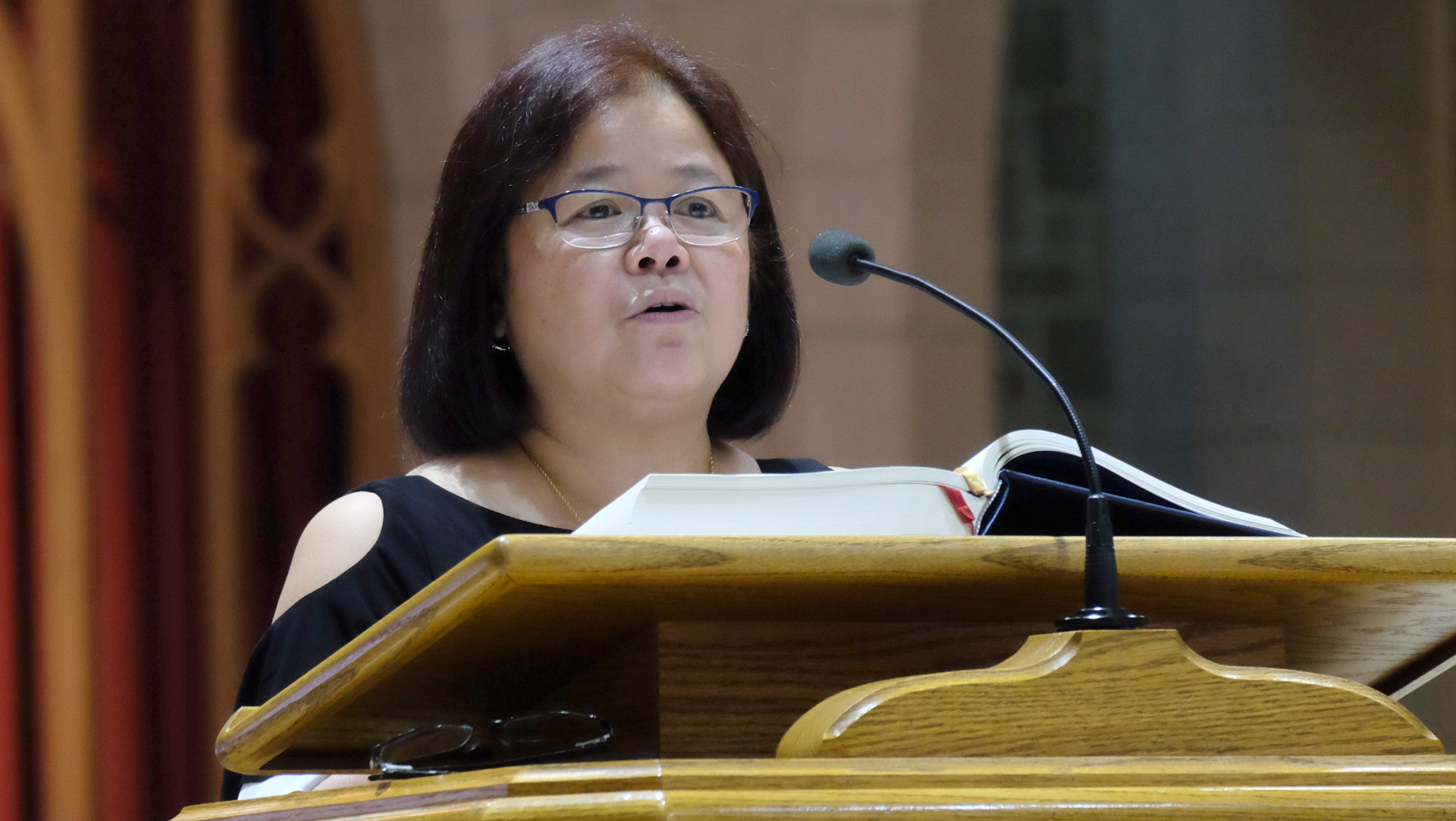 First Reading was given by Elizabeth Morales, whose husband Ramon Morales was one of the three men to be ordained as deacon. 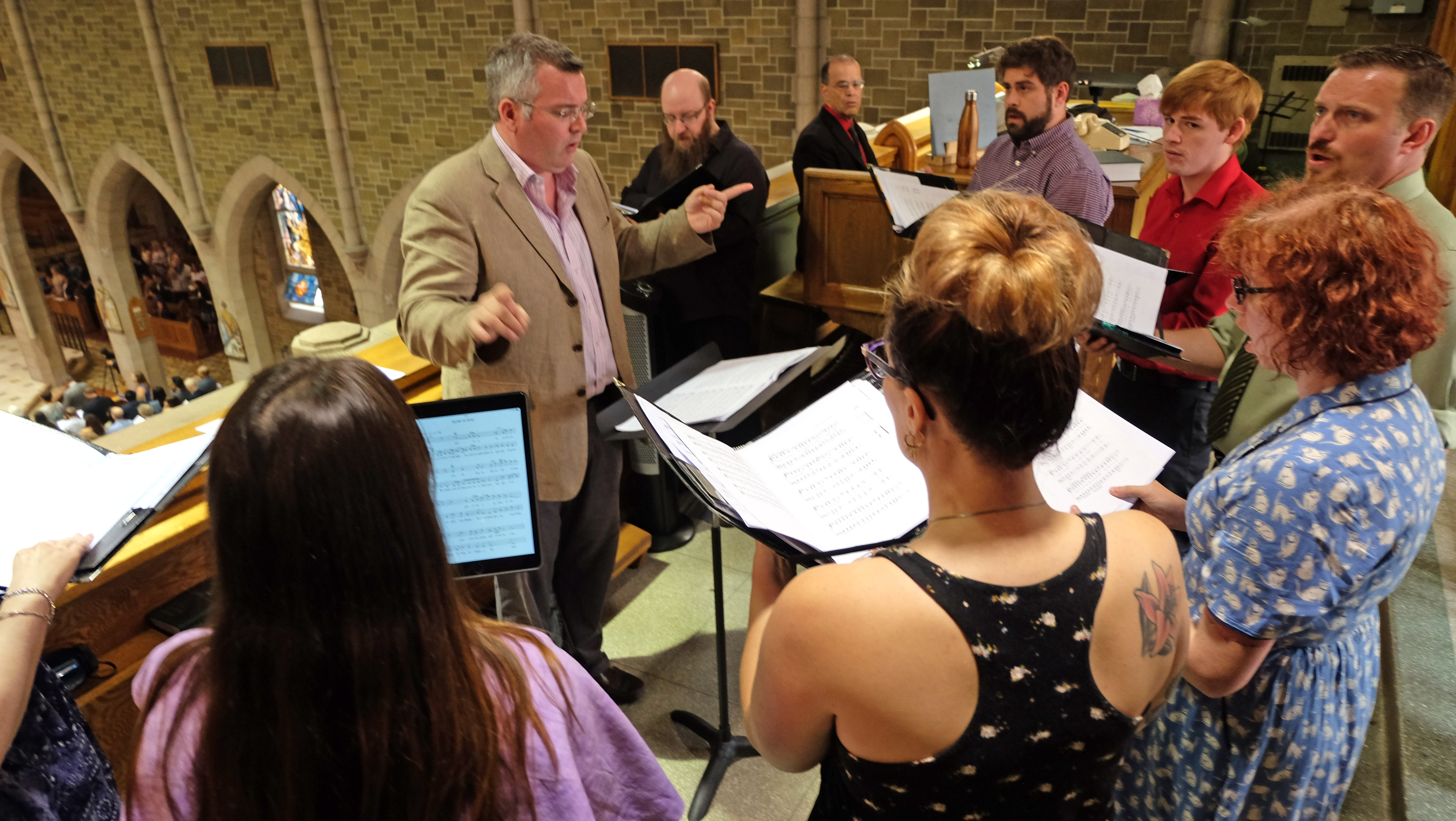 Choir members sang the Gloria and Sanctus from the basilica loft. 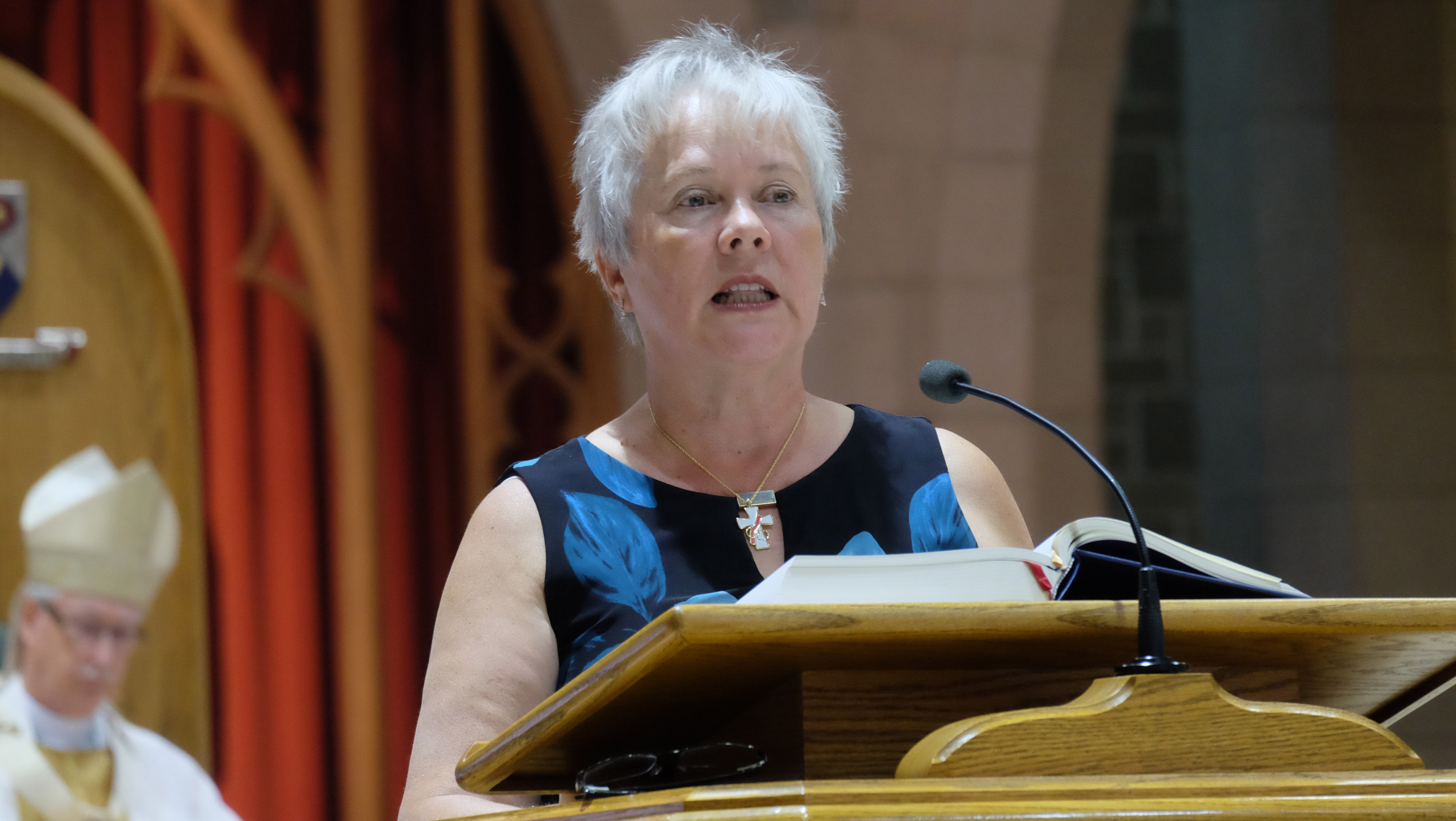 Gwen Meding offers the Second Reading (Acts 6.1-7a) during the celebration. 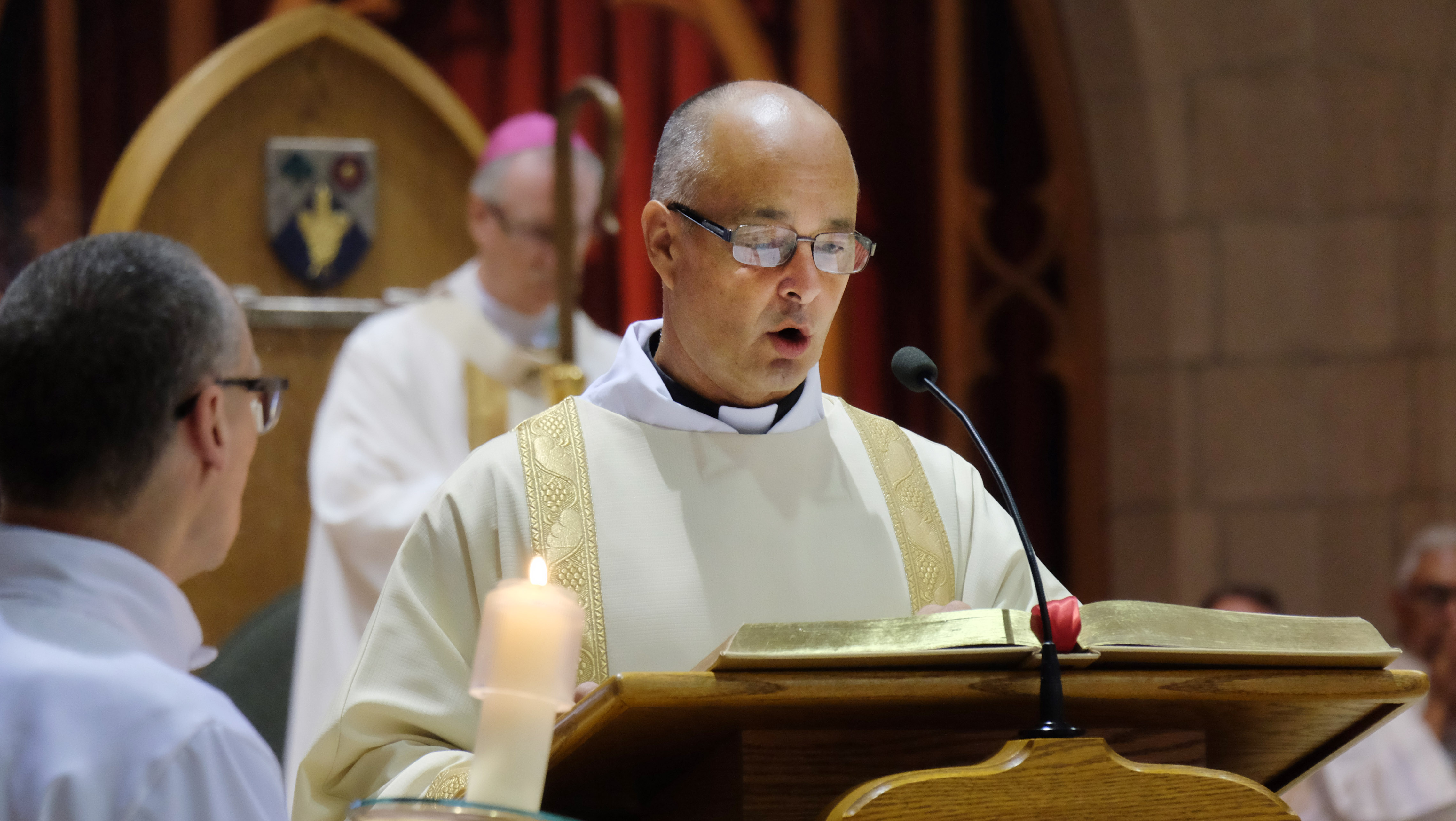 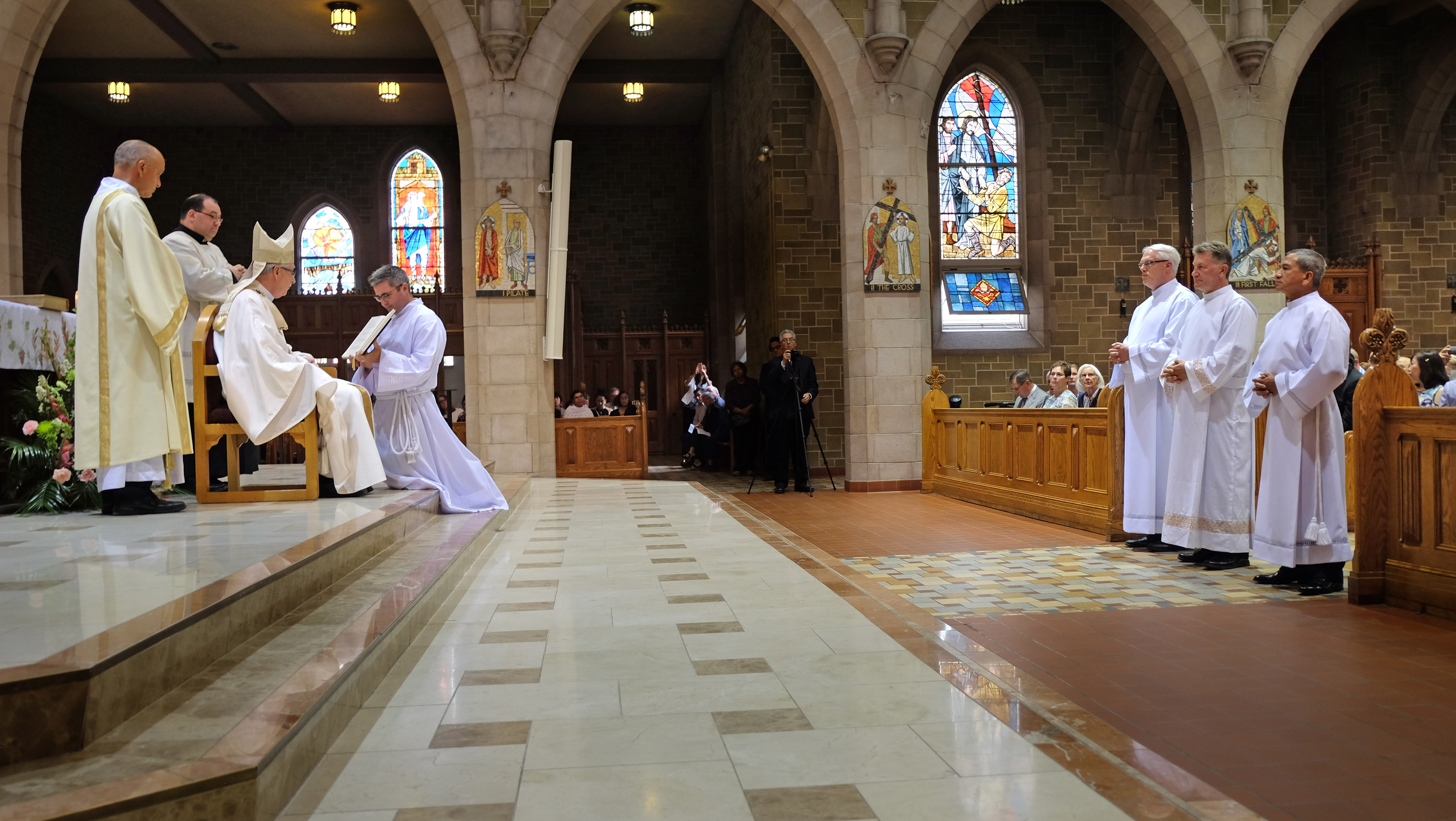 Candidates are called forward and presented to Archbishop Smith. 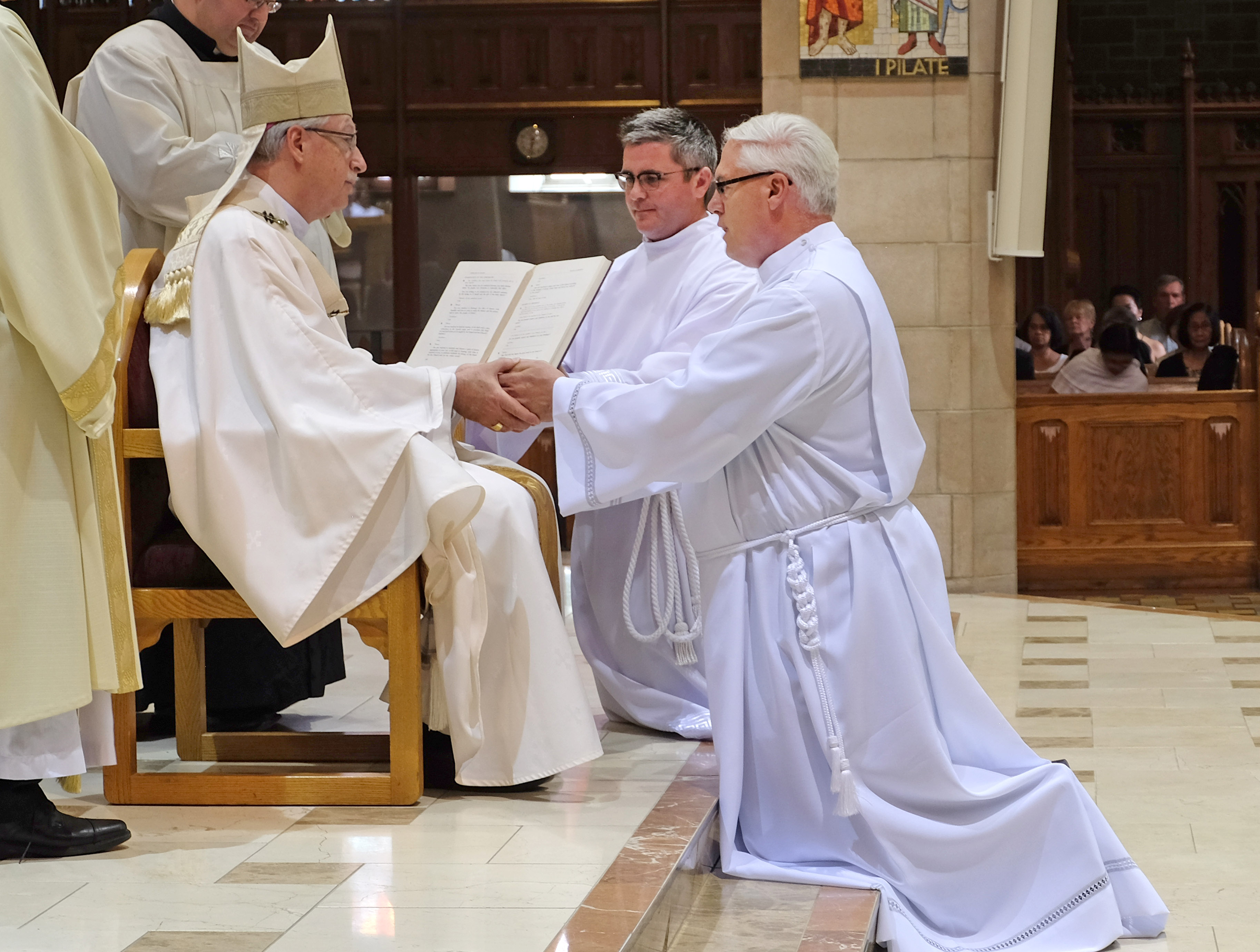 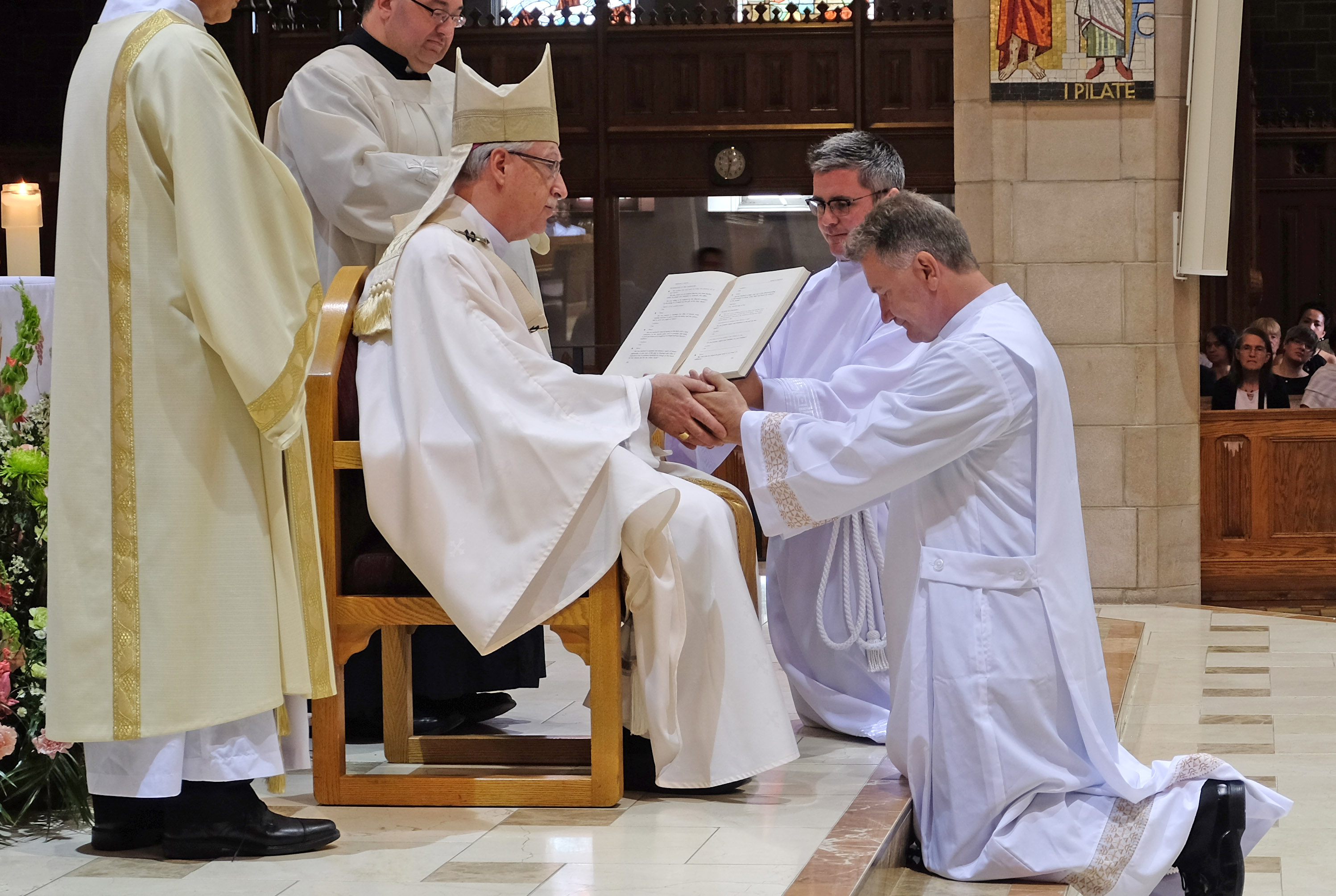 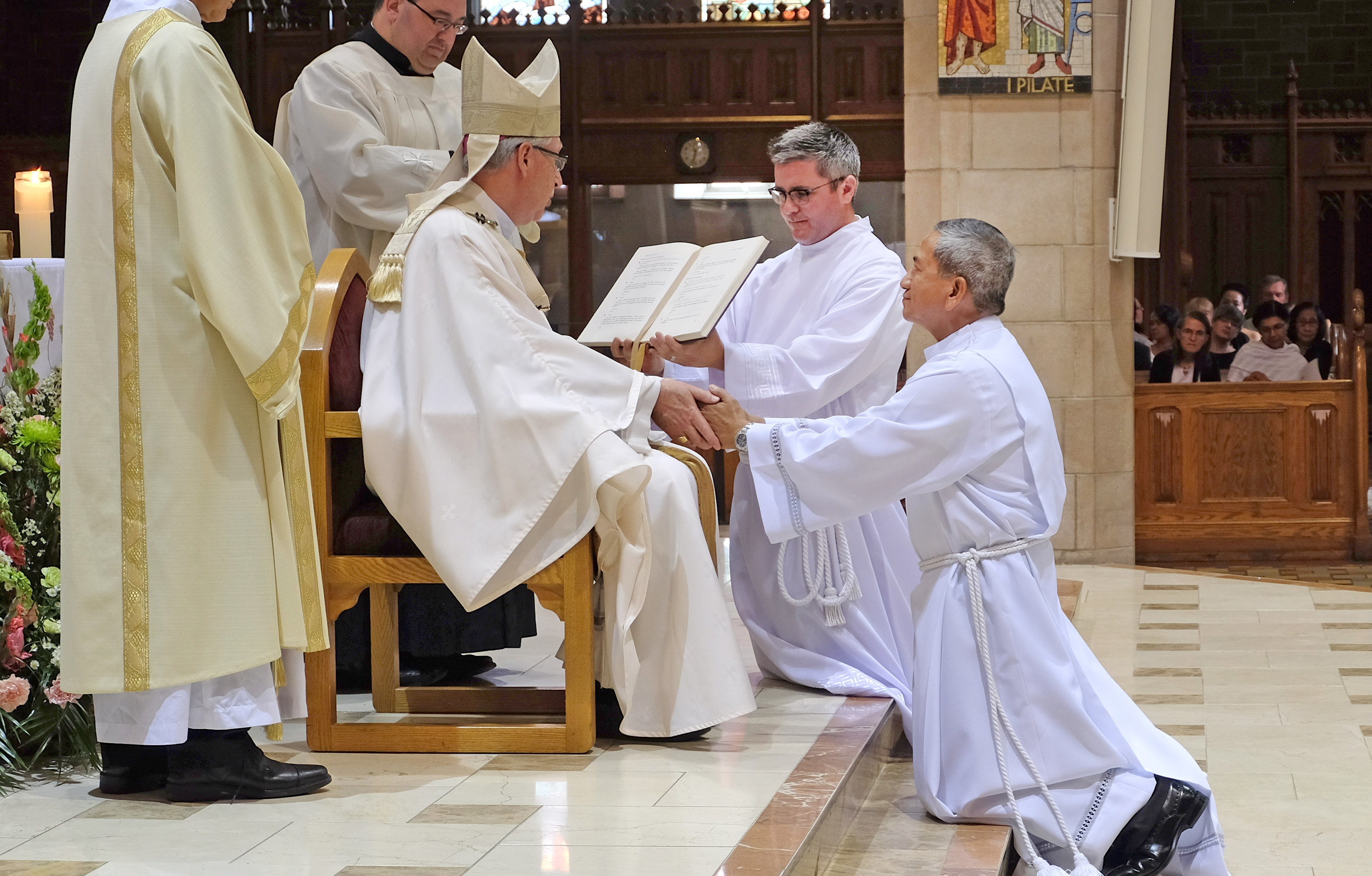 Ramon Morales kneels before Archbishop Smith during his diaconal ordination. 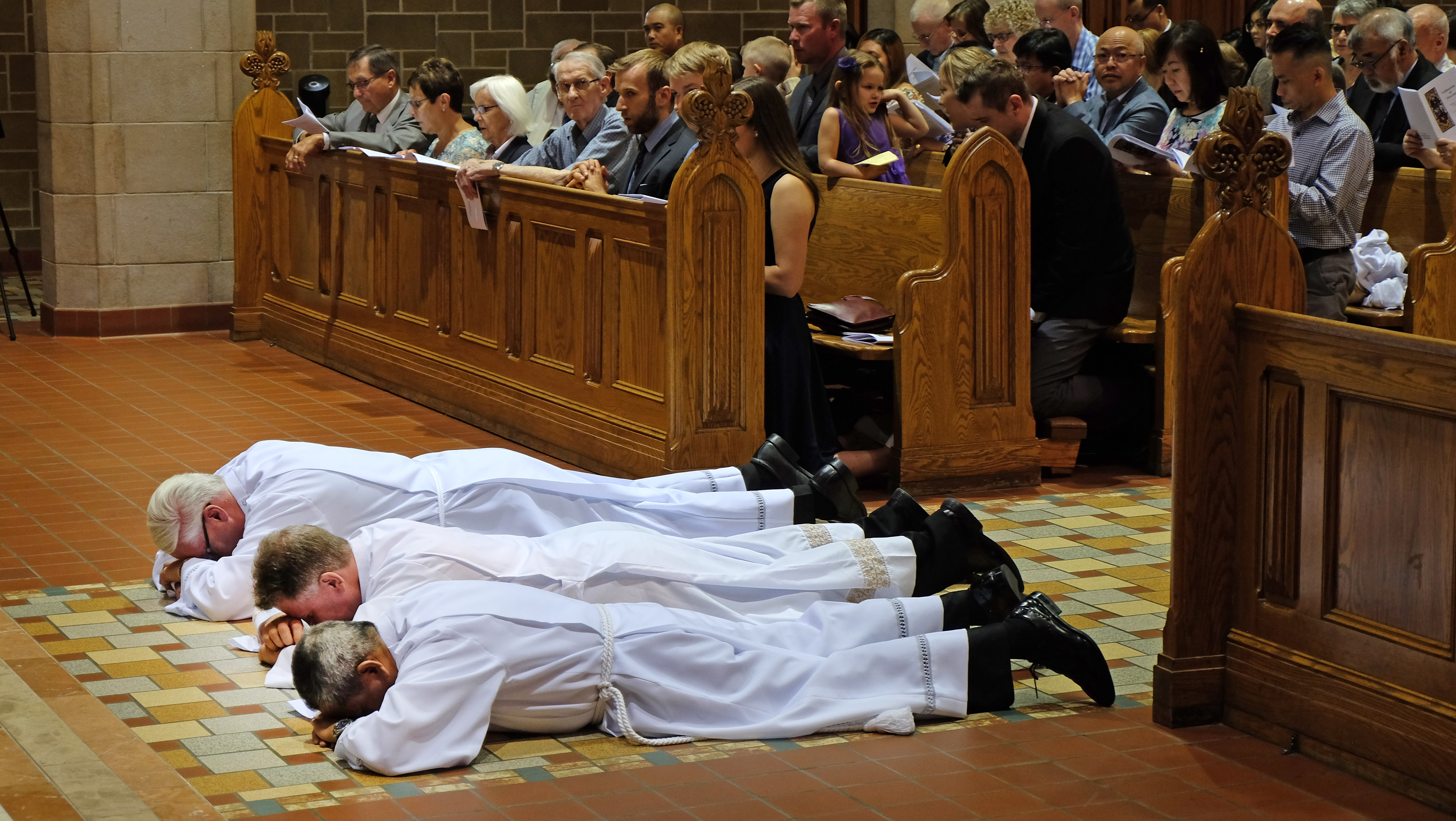 The three candidates for deacon prostrate themselves in humility 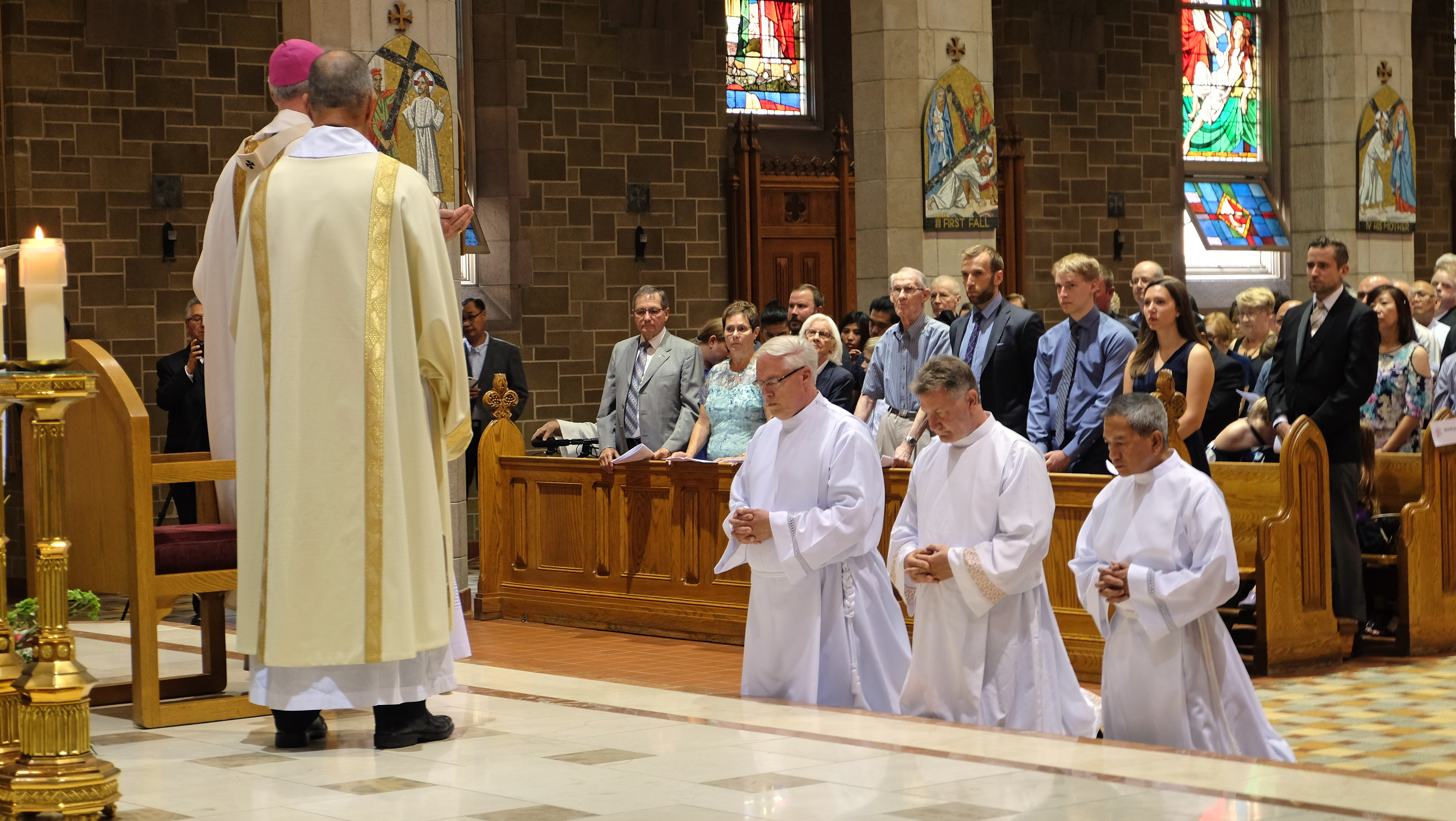 The three candidates kneel during the ordination 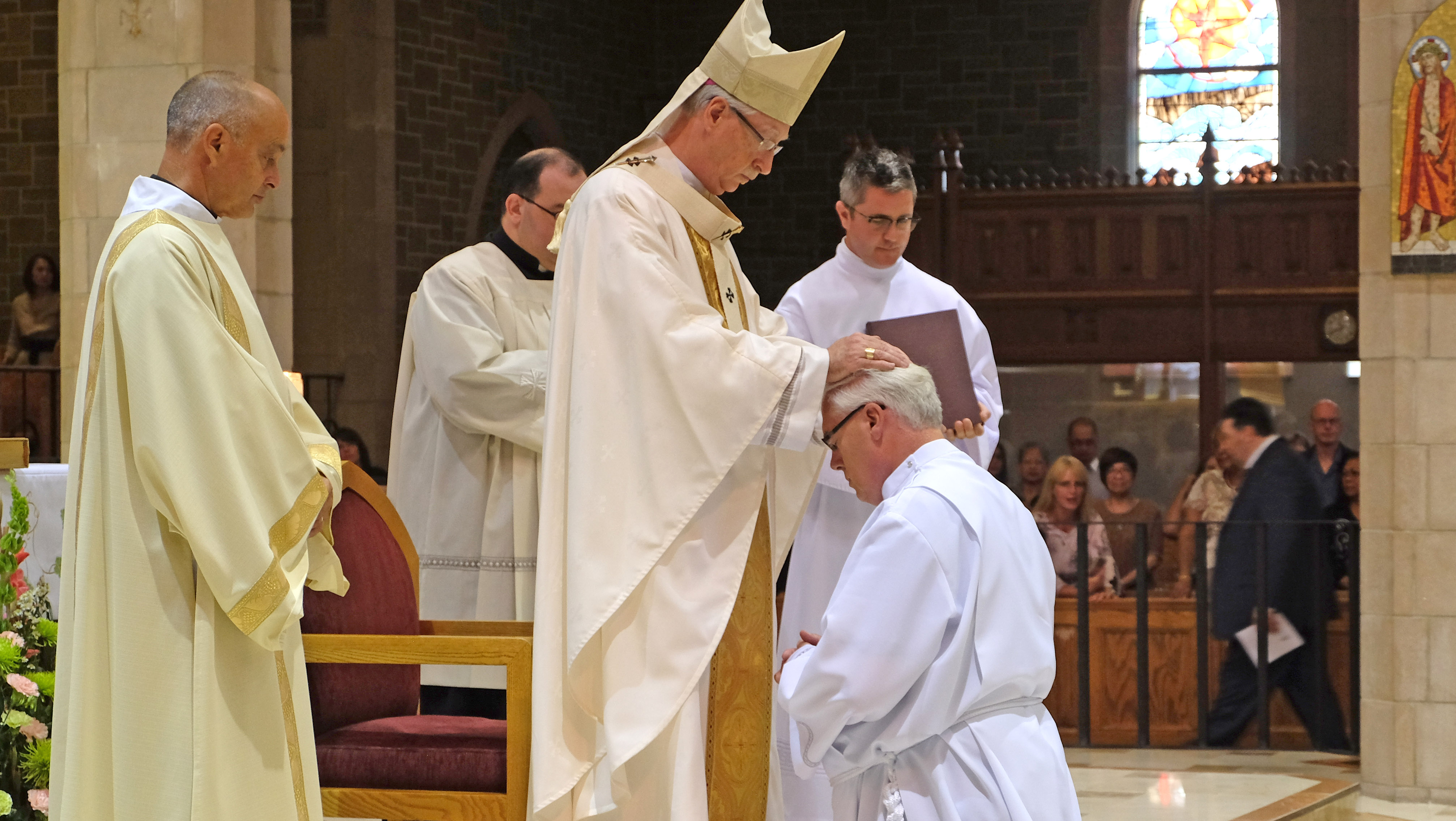 Archbishop Smith lays hands on Chris Ashdown while ordaining him as a new deacon. 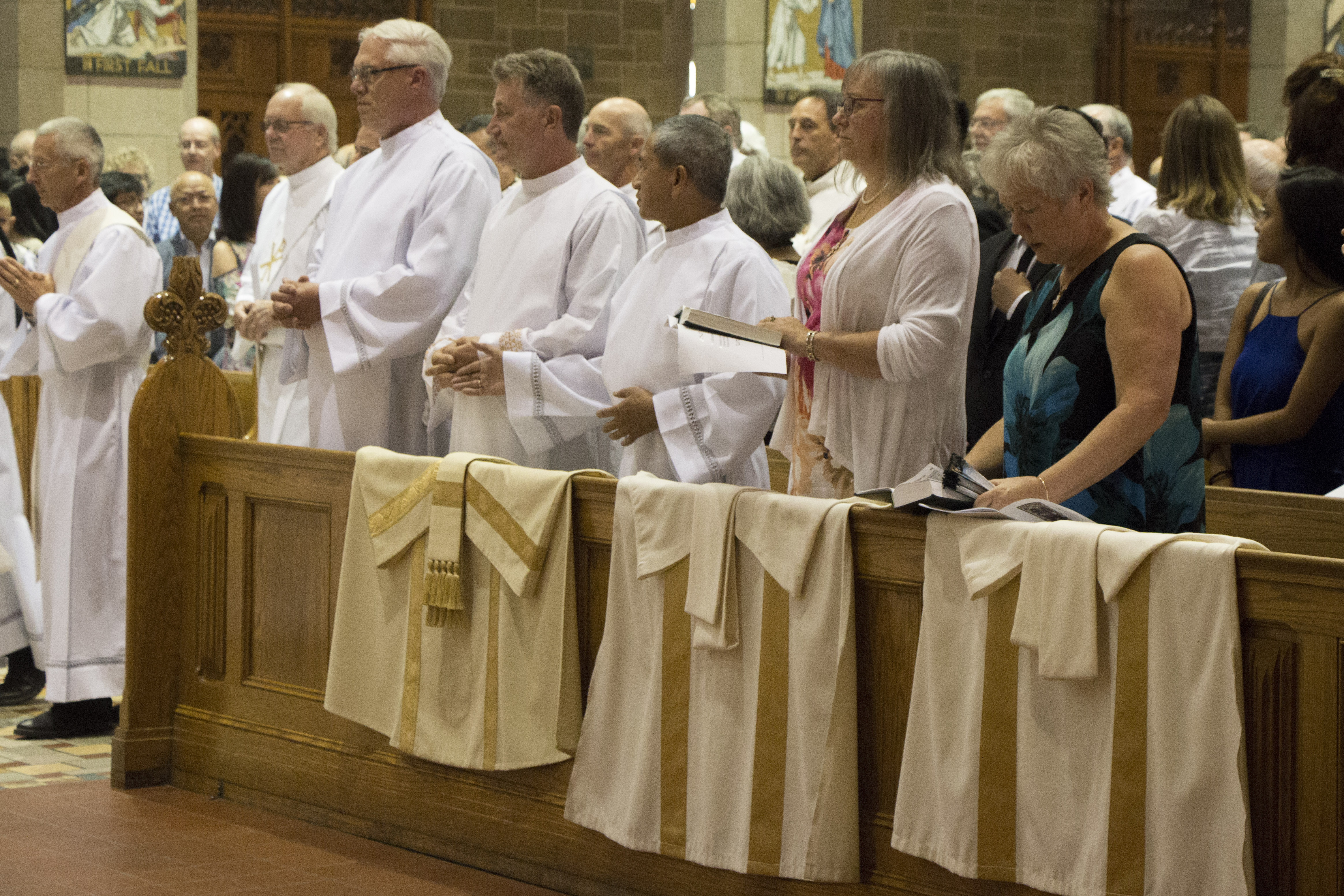 The dalmatic, stole, and alb are vestments presented to deacons upon their investiture. 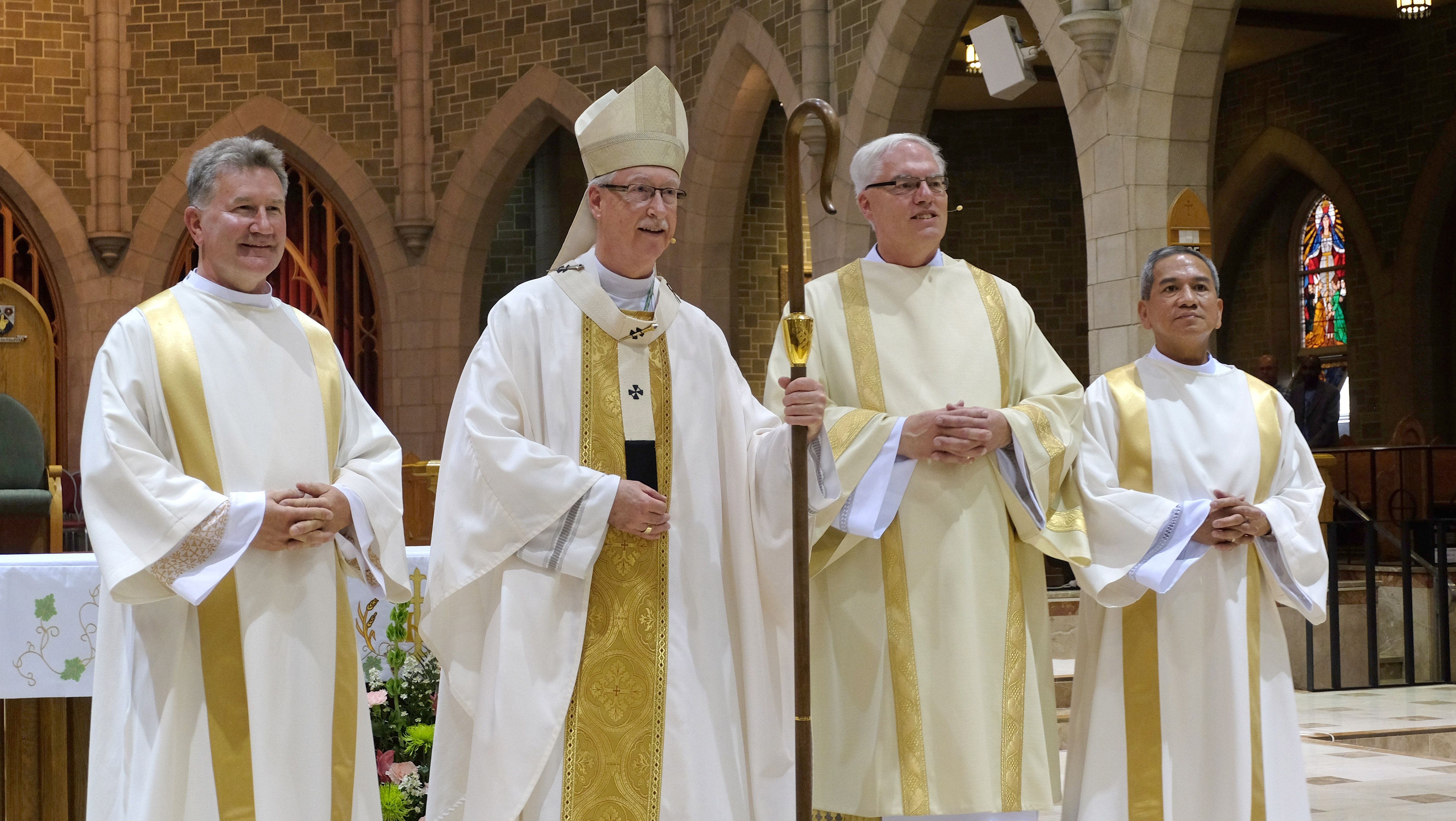 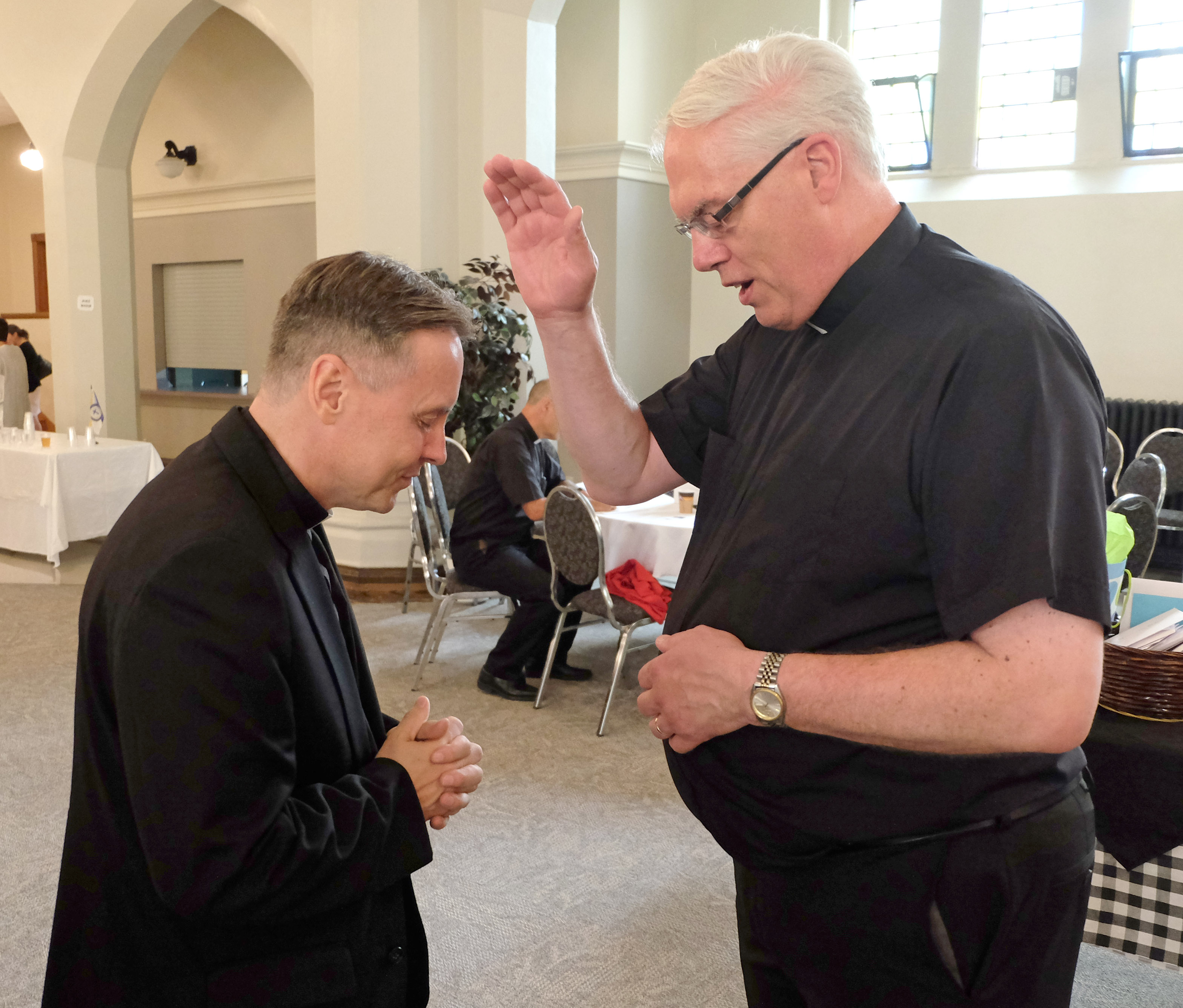 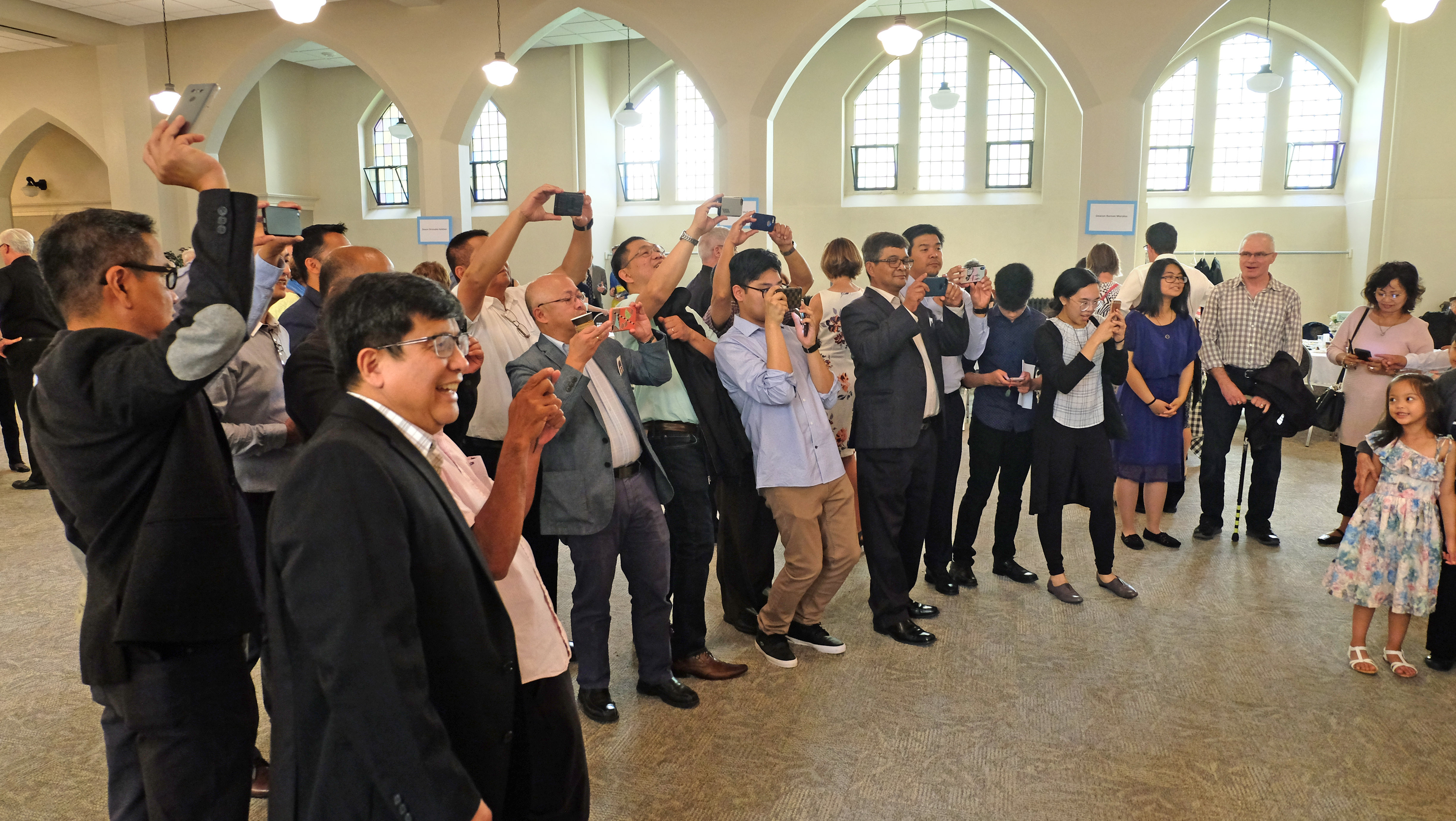 Family, friends and wellwishers were excited to greet and take photos of the new deacons.

The Archbishop offered special words of recognition and thanks for the wives of the candidates   ̶ Elizabeth, Gwen Meding, and Jean Ashdown   ̶ as they sat in the front pew.

“From the beginning of your husbands’ journey of discernment, you have been their faithful companions and most fervent supporters,” he said. “The ministry that they assume today represents a significant change, indeed a sacrifice, for you as well as for your husbands. But I know, as do all of us gathered here, that it is a sacrifice made out of love. We are grateful for the support you will continue to give your husbands as they fulfill their diaconal role in this local Church.”

For Gwen Meding, her husband’s ordination was both a day of joy and the start of a new adventure following four years of diaconal formation.

“Surrounded by family and friends, that’s been awesome,” she said. “We’ve been on a long journey, with lots of miracles and healings in our lives, so now it’s a new door opening, a new chapter.

Meding is the first man from Our Lady of the Foothills Parish in Hinton, west of Edmonton, to be ordained a deacon. His ministry will take him also to the mission parishes in Jasper, Grande Cache, and Susa Creek, and he will continue to make monthly visits to inmates at the Grande Cache federal prison, something he has been doing for 20 years.

The parish has planned an official welcome, including a pancake breakfast, for their new deacon on September 9. Deacon Edward will preach his first homily at the masses that weekend, which will be one of many new experiences for Gwen.

“I’ll tell you, when we first started, that was a big concern for me,” she said with a laugh. “But they have classes, they gave them outlines, and so they’d do reflections through the two years, and I could see the progression.”

The Medings have five grown children, all of whom came to support their dad at his ordination, even though they aren’t personally active in church life.

“So for them to come and support him, we’re glad of that, and we’re looking forward to seeing what God is going to do in their lives, coming up,” she said.

Jean Ashdown described the ceremony as a beautiful celebration with great significance, and like Gwen, she sees ordination as another step in the journey of faith.

“We’ve been in formation for four years, and just trying to imagine what it’s like now – it’s a big step that we’ve been looking forward to. Now it’s ‘OK, what’s that going to look like?’ Very exciting.”

The first time she laid eyes on Chris, he was serving as an adult server at Mass in the chapel of St. Joseph’s College at the University of Alberta, and he has been a longtime server at their parish of St. Thomas More in southwest Edmonton.

“Really from the beginning, I’ve seen Chris in a church context,” Jean said. “So it’s a pretty big step in some ways, but not one that’s really a surprise, because he’s always been on that faith journey.”

She’s not sure how it’s going to feel walking alongside a husband who’s wearing a Roman collar.

“That’s going to be a little different; I might be a little self-conscious at first,” she said with a smile. “Maybe we won’t want to hold hands, because we always think of people in a collar as being priests, right? But I’m very proud  ̶  he’s worked very hard to get this point  ̶  and hoping that everything goes really well. I’m sure it will.”

Is there pressure on a deacon’s wife to behave in a certain way?

“There is that expectation that people do hold you to a higher standard, so you do want to certainly meet that,” Jean said. “I think I’m OK with that; it will be interesting to see how it unfolds. Hopefully it won’t be uncomfortable. But people have been very supportive, though, so I think it will be all fine.”

Elizabeth Morales said she’s depending on God’s grace, because “there’s no guide on how to become a very good wife of a deacon.”

“I know it’s difficult because there are lots of expectations. You know, in a Catholic community they always expect you to be always kind and loving. They’re expecting too much from you, even more if you’re married to a deacon. But with the guidance of the Holy Spirit, and our trust in the Lord, I think I we’ll be OK, because now that I’m with a deacon, I believe that much more grace will be pouring upon us and leading us to what we’re supposed to be doing.”

The three new deacons studied in the same cohort as Deacon Gerald Logan, who was ordained for the Archdiocese of Grouard-McLennan on July 7 at St. Joseph Catholic Church in the northwestern Alberta city of Grande Prairie. Deacon Gerald proclaimed the Gospel at the Ordination Mass, and joined more than 20 other deacons in warmly embracing their new brothers during the Kiss of Peace.

Jean Ashdown has seen a real camaraderie among the deacons that she’s met, an additional blessing of the vocation.

“Some of them we know quite well, and in the years ahead it will be nice to get to know all the deacons and their wives better.”