Whew! A full day. It unfolded around the shore of the Sea of Galilee, stopping at a number of places where Jesus himself spent time to teach and heal. Our prayer from the outset of the day’s journey was that Jesus would do for us what we remember he did for others in these places, namely, draw us into a deep relationship of love with him, a communion of friendship in which we would know his healing grace and hear his promise of life and salvation.

Our first visit was to the locale known as the Primacy of Peter. This place directly on the shore is where the Risen Lord met his disciples who had returned to the Galilee region following the crucifixion. The heart of the event is the meeting between Jesus and Peter, when the Lord asks him three times, “Do you love me?”

To help us fully appreciate what was happening in that dialogue, we turned to the insights of Pope Benedict XVI, who commented on this encounter in his general audience of May 24, 2006. There he pointed out that our one English word, “love”, is used to translate two distinct Greek verbs. The first two times that Jesus poses the question, “Do you love me?“, he uses agapao, which refers to a total and unconditional love. Jesus begins by asking Peter if he loves him with this kind of total love. However, Peter replies with the verb fileo, the love of a friend, implying affection, certainly, but not a total gift of self. In other words, Peter, acutely aware of his recent betrayal and his weakness, tells Jesus that all he can offer is his weak human love. Strikingly, the third time Jesus poses the question he changes the verb to Peter’s and asks “Fileis me?“, that is to say, “Will you at least love me as you can? I am willing to accept and work with that.”

Pope Benedict observes how Jesus adapts himself to Peter and not the other way around. The Lord accepts us, as he accepted Peter, where we are, and works in and through our weakness to transform us, strengthen us, and make us true disciples. All he asks is that we love him as we can and leave the rest up to him.

From there we went to Capernaum, site of the ancient synagogue where Jesus preached his Bread of Life discourse, and of the house of Peter. On our way from the Primacy to Capernaum, our guide pointed out a pathway that led along the shore from one to the other, a route that Jesus himself would often have traced. This path provided us with a helpful interpretive key to the teaching of Jesus, since it brought to mind the path of understanding along which he led the people into his teaching about himself as food for God’s people. Such a “pathway” led from Bethlehem, where the baby Jesus was placed in a feeding trough (manger), to Tabgha, the venue of the multiplication of the loaves and fish, to Capernaum, where he pronounced himself to be the Bread of Life, and finally to Jerusalem at the event of the Last Supper, where in the institution of the Eucharist, he made possible the gift of himself as nourishment unto eternal life.

In a church built directly over the ruins of Peter’s house, we celebrated the Eucharist. It was a moving experience, to say the least, to proclaim as the Gospel for the mass the Bread of Life discourse, first pronounced by Jesus himself only a few feet away from where we were.

Next was the Mount of the Beatitudes. There we paused on the summit to read and reflect upon those first verses of the Lord’s Sermon on the Mount. To bring to the fore their essential meaning, we went back in our minds to the Book of Genesis, that speaks of God looking upon his creation and pronouncing it good. Since Jesus is God incarnate, he brings directly to all of his encounters with people and their practices the same divine vision. Thus, Jesus sees and points out that which is good in God’s sight, as well as that which is no longer in accord with God’s way of seeing things and needs, therefore, to be restored. This is why Jesus frequently challenged purely human ways of thought and behaviour, including human misinterpretations of God’s Word and law. In this context, we appreciated the Beatitudes as the Lord’s great pronouncement of reversal. The human standard of measure pertaining to happiness is set on its head as Jesus pronounces blessed those who, by God’s measure, are truly happy (the poor in spirit, the meek, those hungry for righteousness, and so on). As we read (and later sang!) the Beatitudes we asked the Lord to challenge and free us from all skewed vision and disordered priorities. 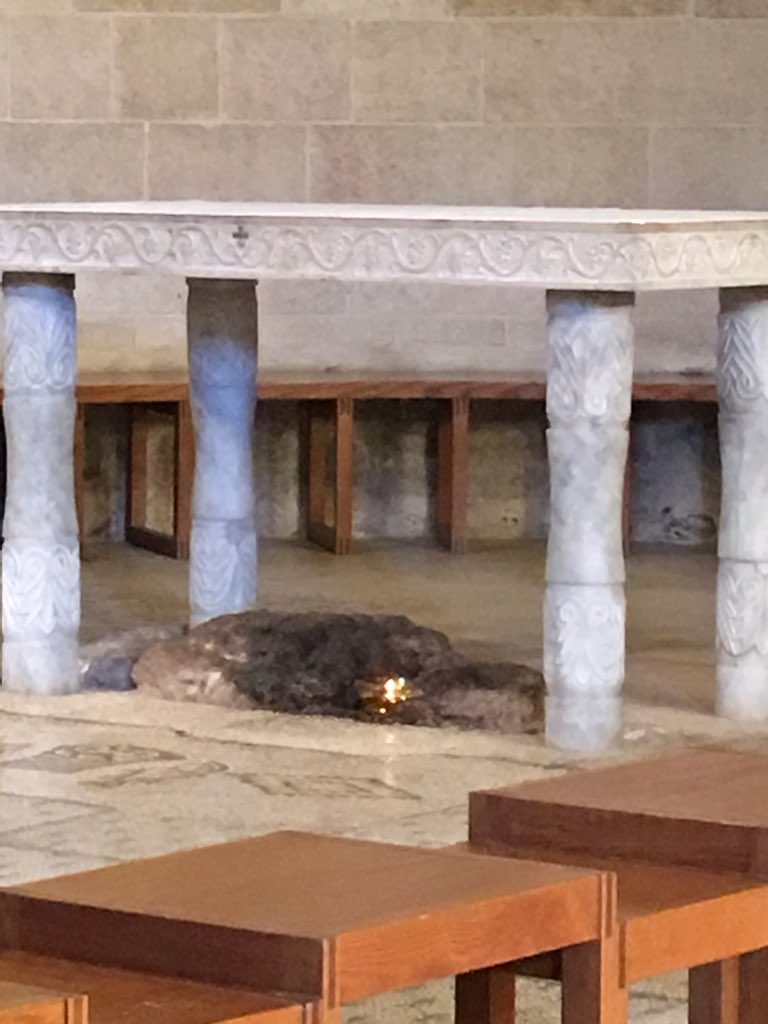 At Tabgha we visited the site of the multiplication of the loaves and fish. Before entering the church to see there the rock upon which tradition holds Jesus placed the bread and fish and the beautiful fourth century floor mosaics that surround it, we gathered in the courtyard to read the account of the multiplication. Since at mass we had already pondered the place of this event along the pathway of understanding traced out by Jesus toward the Eucharist, our attention was drawn to two temptations against which the event warns us. The first temptation is to draw back from any efforts as followers of Christ to help others because of the paucity of our resources. The Gospel calls us to do what the apostles did, i.e., to give to Christ the little we have and trust him to multiply it to superabundance for the sake of others. The second temptation highlighted by the event is to instrumentalize Jesus. That’s what the crowds did. Hungry, they simply implored him to use his power to satisfy their felt needs; entry into relationship of discipleship with him was far from their minds.

We, too, can instrumentalize the Lord when we implore him to to satisfy what we think we need while our hearts remain far from him. Jesus is not our instrument; we are his. He draws us into his love and, from that communion, empowers us for the fulfillment of his will. 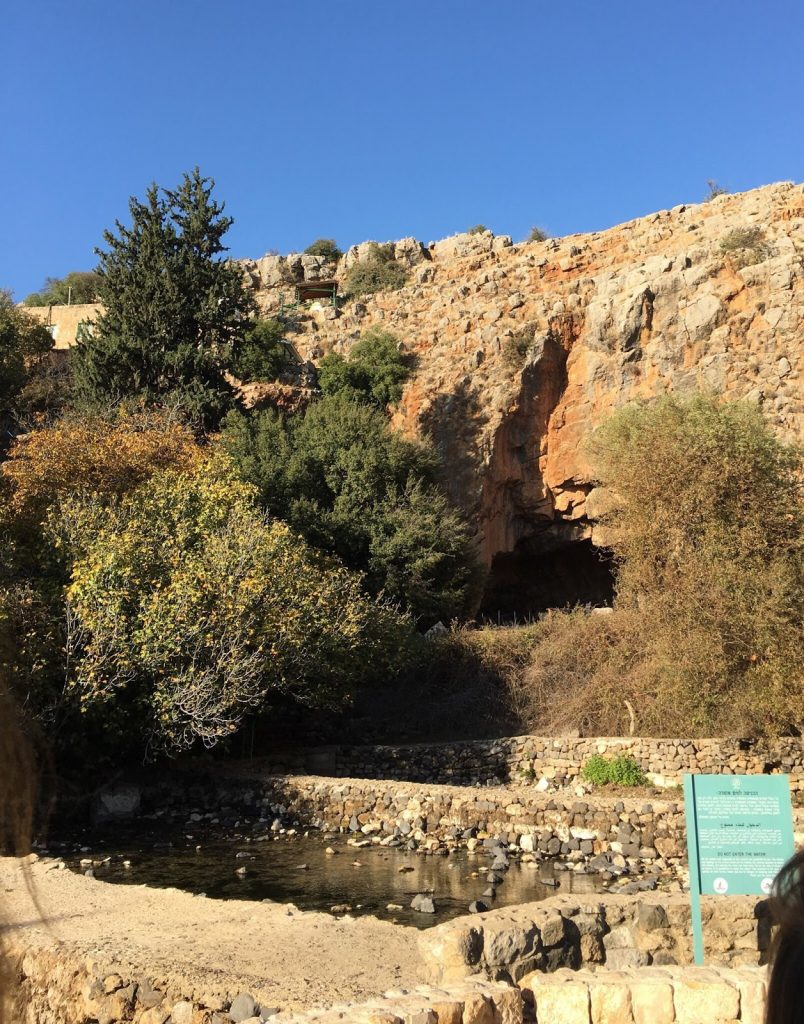 After lunch, we headed an hour north to Caesarea Philippi. This is where Jesus asked the disciples “Who do you say that I am?”, where Peter pronounced the definitive Christian confession (“You are the Christ, the Son of the Living God”), and where Jesus in reply bestowed on him supreme authority for the guidance of the Church: “You are Peter, and on this rock I will build my Church.” At this site, there exists an enormous rock face, in the sight of which Jesus likely made this pronouncement. The imposing rock wall underscores powerfully why the Church has perdured throughout the centuries while countless worldly kingdoms and powers come and go.

Then, back to the Sea of Galilee for a boat ride on the lake (the “sea” is, in fact, a large lake). We embarked at sunset and continued until after night had fallen. Very appropriate, this, since we above all wanted to recall and reflect upon Jesus walking upon this same body of water at night towards his disciples. Being out upon the dark waters after sunset and hearing Jesus ask Peter step out of the boat brought home to us in dramatic fashion the depths of faith by which Peter responded. We know we all have to “step out of the boat” at many points in our lives of discipleship. It was comforting to be reminded to keep our eyes fixed not on the storms but on Christ, and to know that he will reach out and catch us, as he caught St. Peter, at those times when, for fear, we begin to sink. 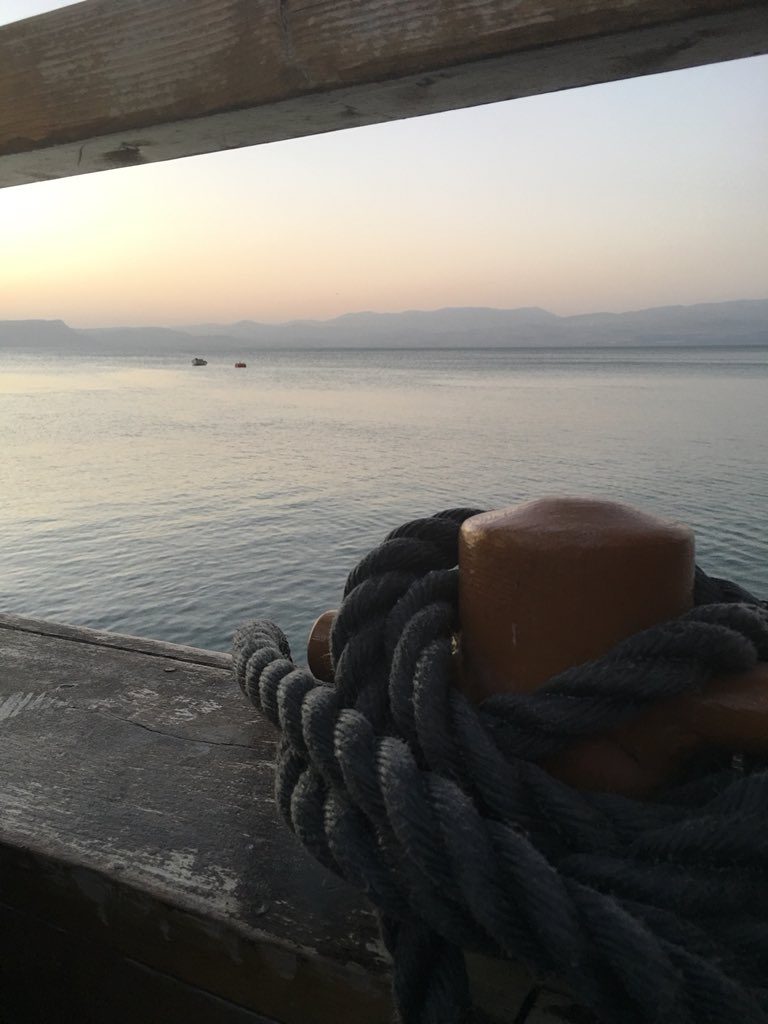