Skip to content
Instead of donating money, Canadian youth are volunteering for charities, according to a new study. Lincoln Ho, Grandin Media

Young Canadians are in a giving mood, but not in a position to give much, according to a new study by the Angus Reid Institute on behalf of the CHIMP Charitable Impact Foundation.

Instead, Canadians 18 to 35 years old are volunteering more and turning to social media to support the charities that matter to them.

In each of 11 different categories of charitable causes, youngsters are out-volunteering their elders. For religious, church and faith group causes, 23 per cent of 18- to 24-year-olds have volunteered, compared to an average of 14 per cent across all age groups. On poverty relief, 26 per cent of 18- to-24-year-olds have volunteered compared to just 12 per cent for the population at large.

But when it comes to money, “Canadians under 35 are less likely to donate to charity than other generations, and generally donate less money when they do give,” said the Angus Reid study released Dec. 6.
Only 23 per cent of millennials (18 to 34 years old) have given money to a religious charity, compared to 29 per cent of boomers over the age of 55.

The survey results show Canadians view themselves as a little more generous than their actual tax filings show. Statistics Canada reports that in 2014 just 21.4 per cent of tax filers claimed a charitable donation and the average annual claim was $280.

In lieu of money, an increasing number of Canadians are supporting charities on social media with hashtags, retweets and likes on Facebook, Twitter, Instagram and similar sites. Sixty per cent of 18- to 24-year-olds and 58 per cent of 25- to 34-year-olds believe this activity is either “very” or “fairly” meaningful.

A big generational difference is that millennials trust that charities are spending their money wisely. Where 82 per cent of over-55 boomers agreed with the statement “Charities waste too much money on salaries and admin and fundraising,” only 62 per cent of millennials would go along with that statement.

“We are far too defensive when we present ourselves to the public,” said Rev. John Pellowe, CEO of the Canadian Council of Christian Charities.

While administrative and promotional spending may be motivating for a small number of donors, what percentage goes to cover overhead is not going to determine whether or how much most donors give, Pellowe said.“The question for the donor is how effectively are they accomplishing their mission, not what percentage goes to good works.”

At the Archdiocese of Toronto’s ShareLife appeal, those percentages still matter a lot.

“Donors trust ShareLife because of our established record of fiscal prudence,” ShareLife communications manager Kris Dmytrenko said in an e-mail to The Catholic Register. “We keep our costs low by allocating only three per cent of funds to administration and seven per cent to fundraising.”

At the Canadian Catholic Organization for Development and Peace, social media activism, volunteering and regular, monthly donations all fit together in a continuum.

Young people engaged with Development and Peace on social media will take that next step to volunteering. Then, once volunteering, they will make whatever financial commitment they can, said director of engagement Genevieve Gallant.

At the 50-year-old Catholic charity, finding a new generation of donors is a process being led by young people themselves.

“It’s our young members who are teaching us about what’s next,” said Gallant. “What’s exciting is that we have young people in our movement and amongst our staff who are really teaching us about the potential of social media for outreach.”

“We start raising awareness early by partnering with our Catholic schools,” he said. “Though most students aren’t in a position to donate, we’ll be familiar to them once they can.” 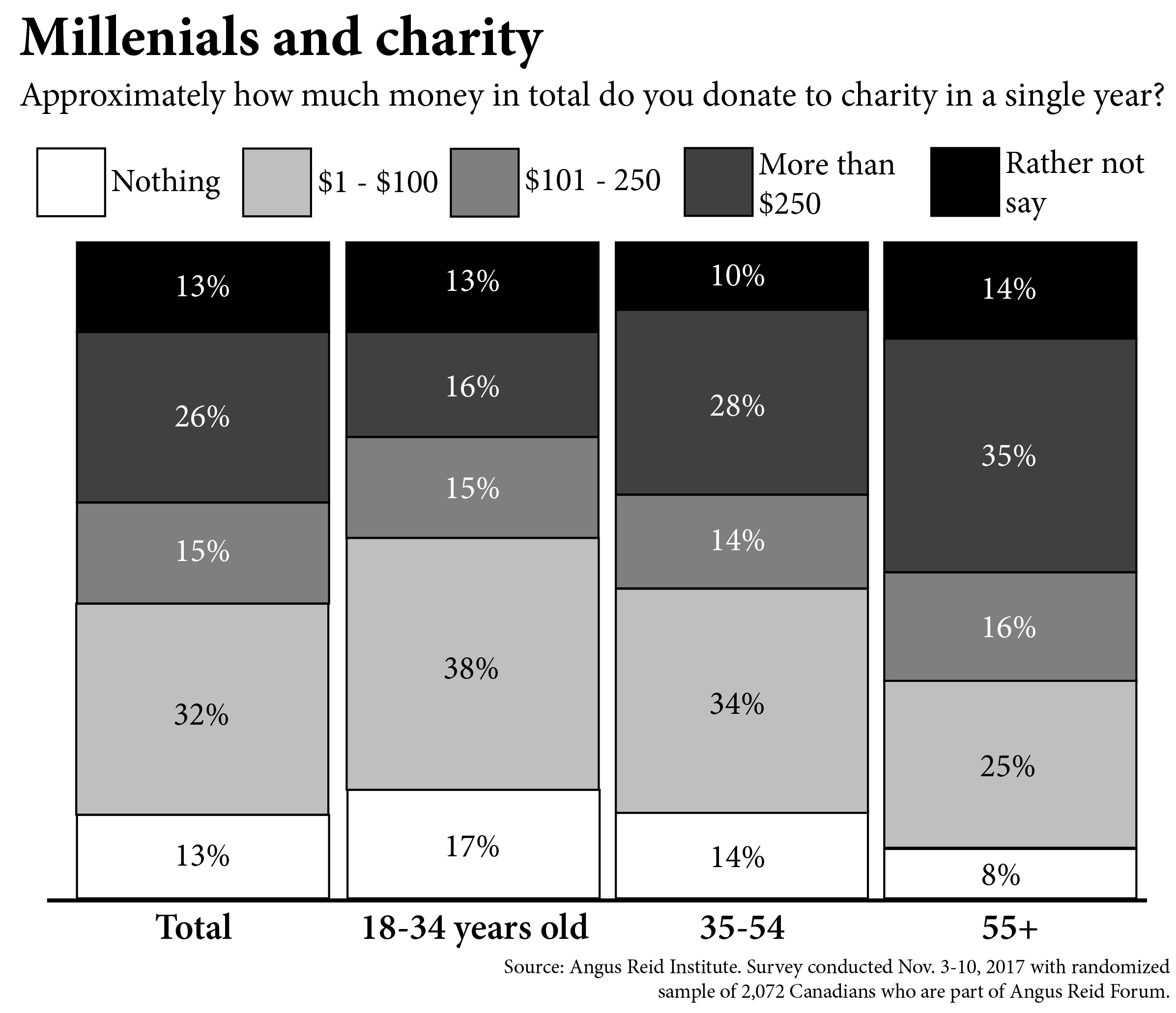